The 9/11 market template – Humble Student of the Markets

In my last post (see 2020 bounce = 1987, or 1929), I had been searching for a template for the current bear market. I had suggested in the past that the roots of this bear has thematic similarities to 2008 (see A Lehman Crisis of a different sort). Today, health authorities are urging the use of social distancing to mitigate COVID-19, while financial institutions practiced similar social distancing at the time of the Lehman Crisis, which ended by seizing up the global financial system.

As the growth of COVID-19 cases continues outside of China, one other template comes to mind. 9/11. 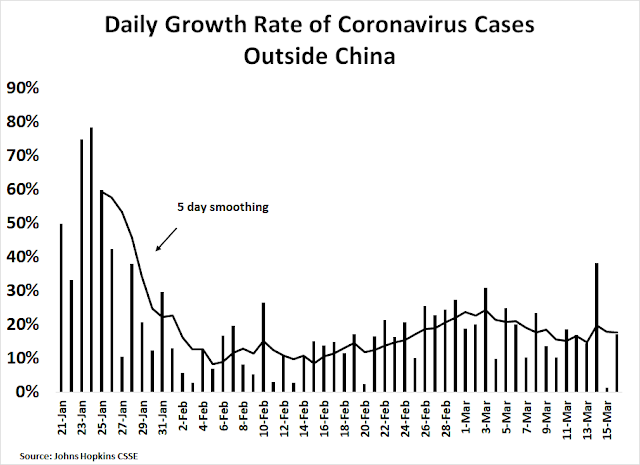 As most of Europe and America go into lockdown to start the week, a review of The Transcript, which is a compilation of earnings calls, brought to mind a 9/11 analogy for the current situation.

COVID-19 is now a global pandemic with Europe as the epicenter
“We have therefore made the assessment that COVID-19 can be characterized as a pandemic. Pandemic is not a word to use lightly or carelessly…Europe has now become the epicenter of the pandemic with more reported cases and deaths than the rest of the world combined apart from China” – WHO Director-General Tedros Adhanom Ghebreyesus

This is a fear-based event more akin to 9/11 than 2009
“I think this event is very similar to 9/11 in terms of the psychology of what’s driving it. It’s a fear based event” – JetBlue Airways (JBLU) CEO Robin Hayes

“This is a fear event, probably more akin to what we saw at 9/11 than necessarily what we saw in 2009. I think you’re seeing a suspension of activities, whether it be corporate activities, group activities, events where people get together in large numbers, all of which impact our demand set. So, I think it’s really premature to try to be drawing too many corollaries.” – Delta Air Lines (DAL) CEO Ed Bastian

“We are in a situation which is exceptional in every respect…more exceptional than at the time of the banking crisis, I would say.” – The German Chancellor Angela Merkel

with significant demand deterioration for airlines worse than after 9/11
“when I look at how the demand has deteriorated last couple of weeks, it appears to be worse than what we saw after 9/11.” – JetBlue Airways (JBLU) CEO Robin Hayes 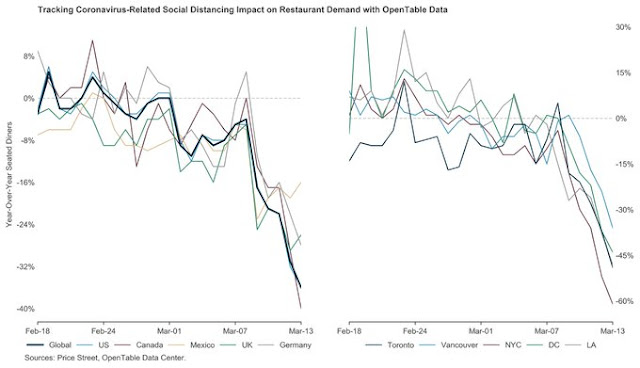 Bloomberg also reported that most airlines could be bankrupt by the end of May.

Limitations to the 9/11 analogy

However, there are limits to the 9/11 analogy. The post-9/11 sell-off occurred in the middle of a bear market and recession. The latest COVID-19 shock is the spark for a new recession. The market bounced as fear subsided, but didn’t bottom until about a year later with a double bottom in July and October 2002. 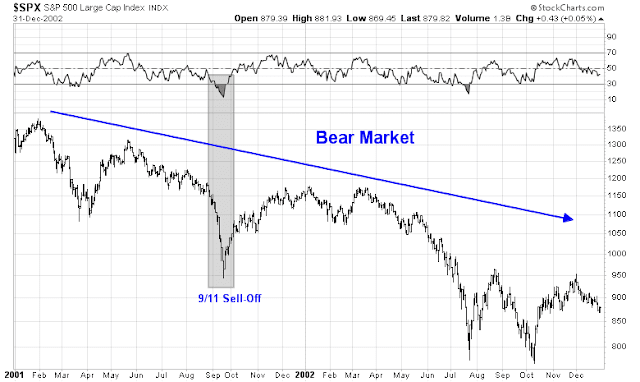 Today, Wall Street is just coming to to grips with a sudden slowdown which is only just starting, and analysts are scrambling to estimate its magnitude, but the situation is so fluid that any estimates are virtually worthless by the time they are published.

Joe Wiesenthal at Bloomberg made a sensible comment this morning about the fears gripping the market: Physical social distancing is creating financial difficulties for households and the corporate sector, which is worrisome for financial solvency [emphasis added]

The House passed a bill on Friday night to provide relief to some people who are affected by the virus, but it’s far short of the fiscal bazooka that several economists believe we urgently need. What’s weird about this situation is that we need massive fiscal help from DC, but we don’t exactly need stimulus, per se. Stimulus typically implies an attempt to get the economy moving positively again. But that’s not exactly what we want right now, because in the ideal scenario everyone could just wait this thing out by spending a month or two in their homes eating canned goods, watching Netflix and facetiming. Then when the virus is mostly gone, go out and have a bacchanal for the ages in the warmer weather. The problem, as Larry Summers eloquently put it, is that “economic time has been stopped, but financial time has not been stopped.” In other words, if we all cocoon for two months, we might physically survive, and the infrastructure of the modern world would be waiting for us upon our re-emergence, but in the meantime the bills pile up. The rent’s due. The mortgage is due. Or the landlord’s mortgage is due. The credit card bill is due. Taxes are due. For a business, paychecks must go out. Suppliers must be paid. Sp we don’t need economic stimulus right now. We don’t need people out shopping or building new infrastructure or building new homes. Every one of those things involves people congregating and risks spreading the virus. What we need is cash to keep people from going bankrupt or evicted. Cash to keep the lights on. Cash to keep people employed; to keep their healthcare. Cash to buy basic necessities, like food and medicine. So let’s not think in terms of reviving growth for now. Let’s think in terms of cash, so that for as long as we’re in deep freeze, people can stay alive and continue to meet their financial obligations.

The analysis from Wiesenthal and Mankiw leads to the idea that the economy has suffered a sudden shock, and recovery will take some time. Wall Street analysts have not fully modeled or even had the time to estimate the full impact of the COVID-19 pandemic. It will therefore take time for the market to adjust to new expectations. This leads to the following market scenario: