So bad, it’s good? – Humble Student of the Markets

Mid-week market update: This bear market has astonishing in its ferocity, but we may be reaching the it’s so bad things are good point. Here are some “green shoots” that are starting to show up.

Baron Rothchild was famously quoted as saying, “The time to buy is when blood is running in the streets, even when the blood is your own.” We seem to be at that point of blind panic. Realized maket volatility is now on par with the Crash of 1929 and the Crash of 1987. 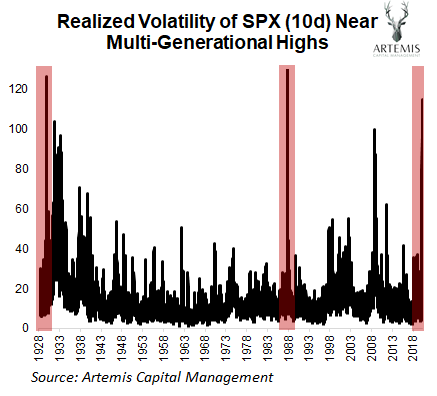 Is sentiment bearish enough for you?

The NAAIM Exposure Index, which measures the sentiment of RIAs managing individual investor funds, is now below its 52-week Bollinger Band. Historically, that has been a good intermediate term buy signal. In the current circumstances, we have seen other “historically good” buy signals fail as stock prices continue to crater. 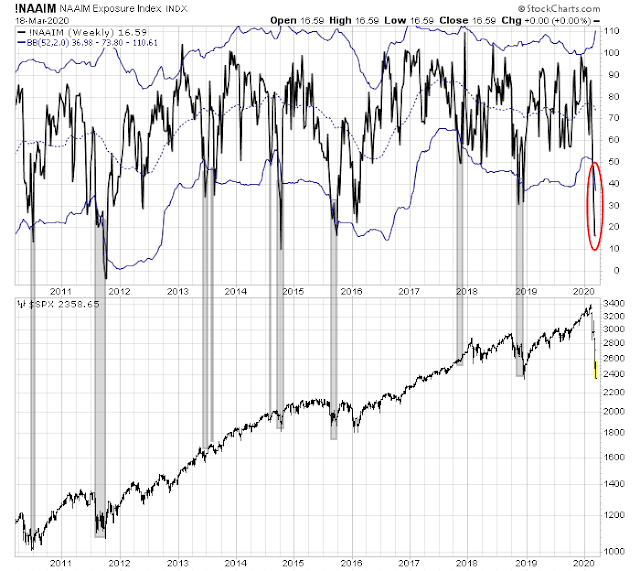 Another constructive sign is the spike in %Bears in II sentiment. The rising level of bearishness is another sign of washout and capitulation. While I interpret this latest reading as constructive, I would not regard it as outright bullish as there are still more bulls than bears. 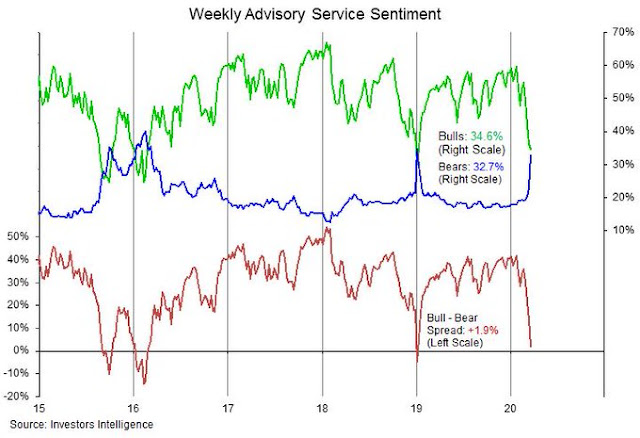 Waiting for the sustained bounce

I am still waiting for signs of a sustainable oversold bounce. The hourly S&P 500 charts shows the index tracing out a bullish falling wedge pattern. An upside breakout would be a positive development, but I would watch for confirmation in the form of two consecutive positive days before getting overly excited on the bullish side.

There are hopes for a positive day tomorrow. Rob Hanna’s analysis of 5% downside gaps shows a slight bullish edge the next day (Thursday), but the sample size is small (n=5) and therefore not very dependable.

Bottom-up reports indicate that tomorrow morning’s initial jobless claims reports will show an immense surge. If sustained, it would translate to a rise in the unemployment rate of 1% or more. Watch how the market reacts to that print.

My inner investor is at his level of maximum defensiveness. My inner trader is on the sidelines. The market will eventually stage a “rip your face off” relief rally at some point. My inner trader is waiting for two consecutive days of gains before taking action to jump in on the long side.