A Dash for Trash countertrend rally – Humble Student of the Markets 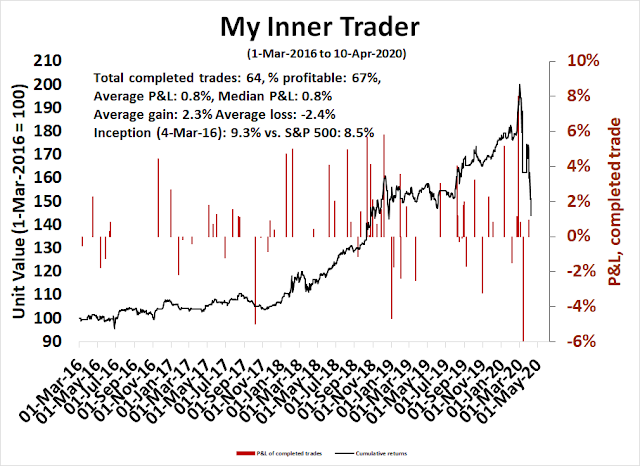 A dash for trash

The recent rally off the March bottom has been impressive and could be nearing an inflection point. The SPX and NDX saw their rebounds pause at their 50% retracement levels. 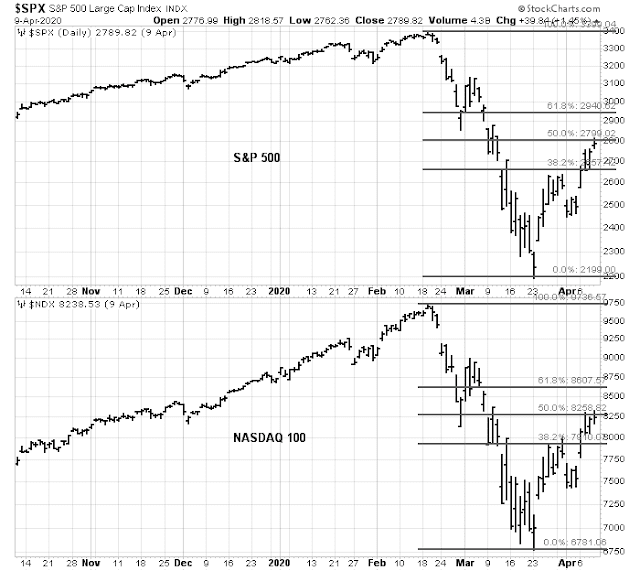 Andrew Thrasher characterized the rally as a “dash for trash”, an anti-momentum rally where the worst performing stocks led the advance. 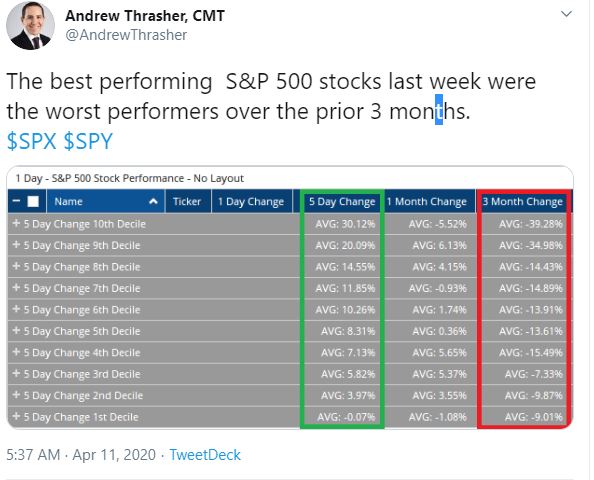 The internals of the “dash for trash” rally has a number of important implications for technical analysts, and could color conventional analysis and lead to erroneous conclusions.

What does the “dash for trash” rally mean? First, it means that the price momentum factor got clobbered, and former laggards, such as small cap and bank stocks, turned around and led the market. Such “low quality” rallies are usually short-covering rallies, as traders bought back their short positions. 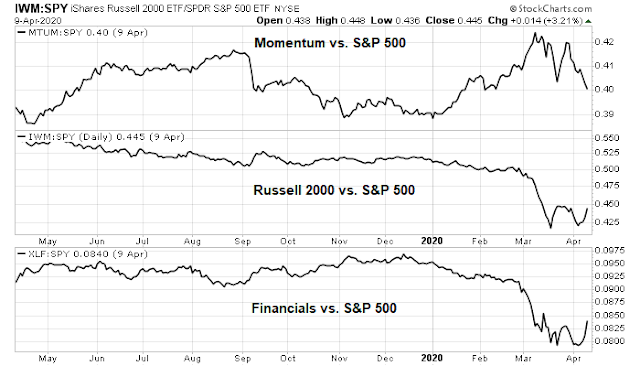 The outperformance of small cap stocks can also color breadth analysis. Equal-weighted indices give greater weight to small stocks compared to their large cap weighted counterparts. This creates an effect of better breadth participation. The NYSE Advance-Decline Line (red) is exhibiting a positive divergence against the S&P 500, as well as showing higher highs and higher lows.

The strong market breadth led veteran technical analyst Walter Deemer to observe that the market is on the verge of a “Whaley Breadth Thrust” buy signal.

This Wayne Whaley publication describes the Whaley Breadth Thrust (WBT) and its methodology in detail. Breadth thrusts tend to be defined by strong price momentum, usually off an oversold bottom. Price momentum episodes are often followed by further market strength, as market participants pile into a FOMO buying stampede.

Unless I am reading the Whaley paper improperly, my analysis of the paper found the buy signals to be somewhat unsatisfactory compared to my preferred Zweig Breadth Thrust buy signal, which demands that the market must be oversold and exhibit a breadth thrust rebound within 10 trading days. As an aside, the market saw a recent setup for ZBT buy signal, but failed to achieve the breadth thrust within the allotted time window. 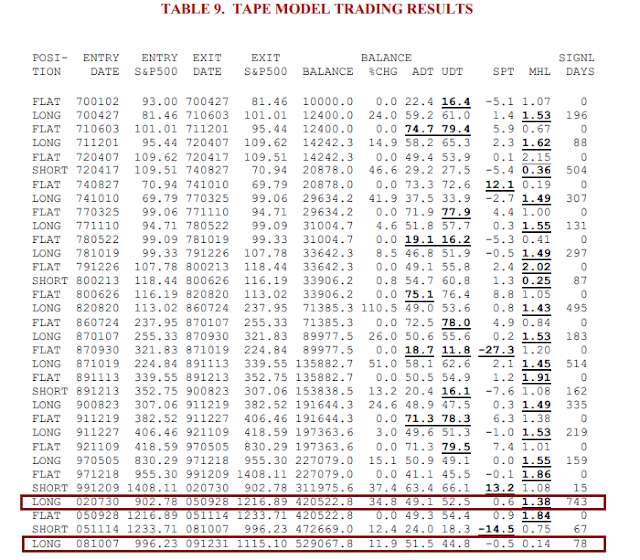 Consider the last two buy signals of this system, which occurred in 2002 and 2008. The Whaley buy signal occurred on July 7, 2002, compared to a ZBT buy signal in May 2004. The WBT was early, and investors would have had to contend with several months of choppy markets before the bulls took control of the tape. The ZBT was also weak, but the drawdown was far less severe than the WBT.

A similar conclusion can be made of the 2008 buy signal. The WBT was early while the ZBT was triggered just after the March 2009 bottom.

The WBT signal appears to be more effective as a long-term buy signal, but investors need to be prepared for short-term disappointment.

What the bull case means

While I have no philosophical  objections to the idea of a short-covering rally which supports a breadth thrust, I am skeptical about the fundamental backdrop from which a bull phase can be sustainable. Here is what you need to believe in order to buy into the bull case.

The economy has hit a brick wall, as evidenced by the skyrocketing initial jobless claims. 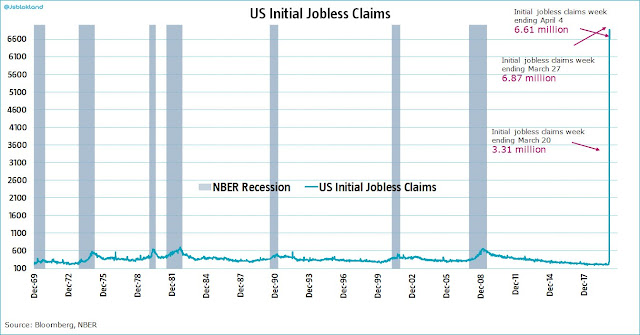 In order to be bullish, you have to believe that the combination of fiscal and monetary policy can repair the growth outlook despite the uncertainty of the effectiveness global public health policy. Paying 17.3 times forward earnings is entirely appropriate, even though the multiple is above the 5-year average of 16.7 and 10-year average of 15.0. 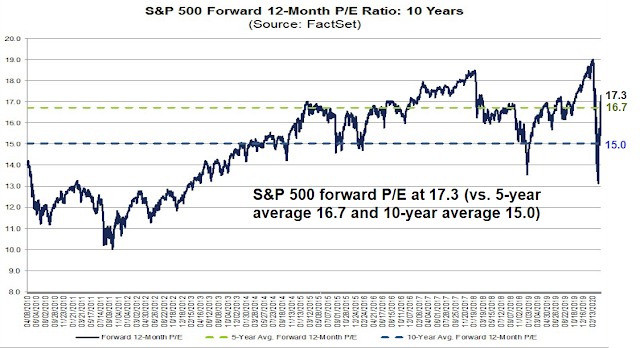 The E in the forward P/E is falling. Q1 earnings season is about to begin. Corporate guidance will be ugly. Companies will undoubtedly report as much bad news as they can and attribute it to the COVID-19 pandemic, rightly or wrongly. 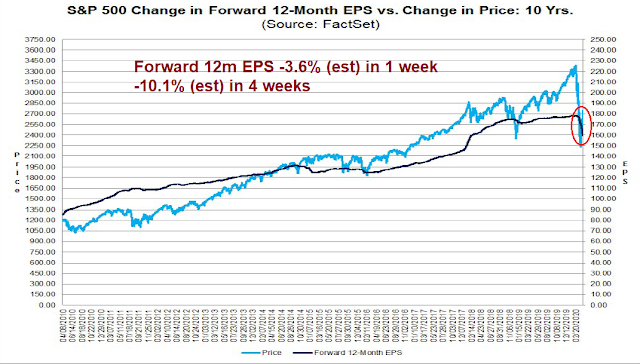 Even if you were to accept the current earnings estimates as gospel, you also have to believe that earnings can form a V-shaped rebound, and everything will be back to normal by year-end. 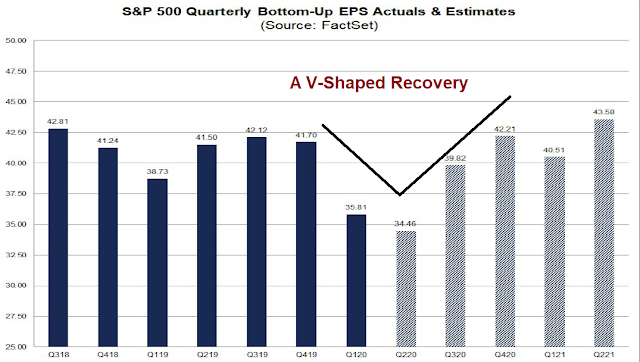 Do those seem to be reasonable assumptions? In the absence of a COVID-19 treatment or vaccine, can we expect the universe to flip a switch and life can return to “normal” if governments were to suddenly relax their lockdowns after “flattening the curve”?

What about the Fed? Didn’t the Fed just throw another kitchen sink at the market? Isn’t that equity bullish? I present Japan as Exhibit A. The Japanese economy topped out in 1990, and the BOJ has tried for decades to stabilize the economy, first by lowering rates, then QE, and then even resorting to buying Japanese stocks. While monetary policy did stabilize the stock market, the Nikkei Average has traded sideways since then, while US and non-Japanese equity markets roared ahead during that period. Central bankers can act as fire fighters, and but they cannot boost stock prices, except in the very short term.

This rally feels like a counter-trend relief rally, instead of a V-shaped recovery off a major bottom. In a very short period, sentiment has shifted from “this is a W-shaped bottom and we are going to test the lows” to “the bull is back”. Arbor Data Science surveyed Twitter sentiment and categorized respondents into perma-bulls, perma-bears, pragmatists, and economists. The consensus is now bullish, and no one is bearish. 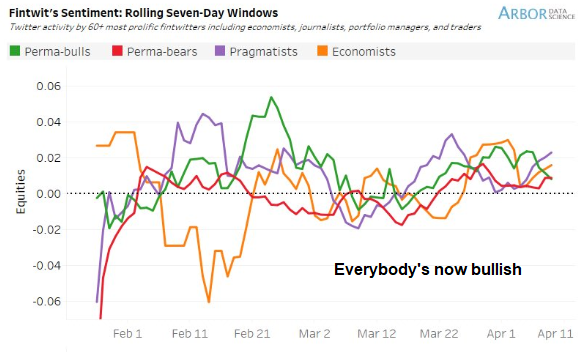 As well, the Market Ear observed that the customers of Robinhood, which is a low-cost discount broker favored by small retail traders, have been piling into the shares of Carnival Cruise Lines. 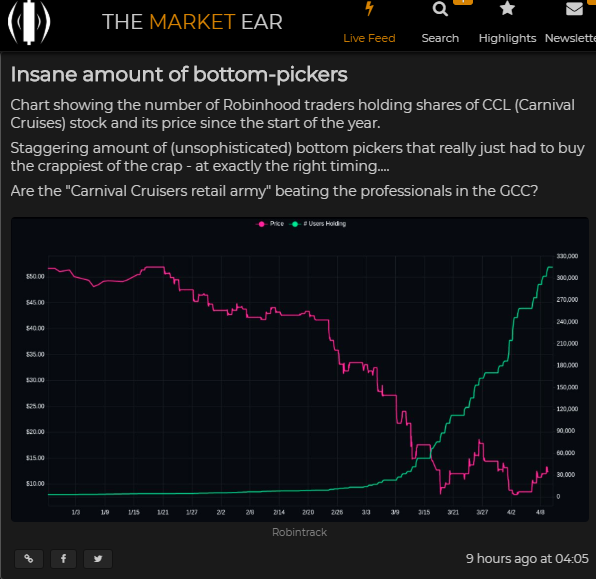 Some of my cross-asset factors are making me uneasy about this rally. My favorite short-term directional indicator, the ratio of high beta to low volatility stocks, unusually turned down even as the market rallied on Thursday. This ratio has led market turning points by a few days in the recent past. While Thursday’s reading could just be a data blip, I will be watching closely on Monday for a confirmation of factor weakness. 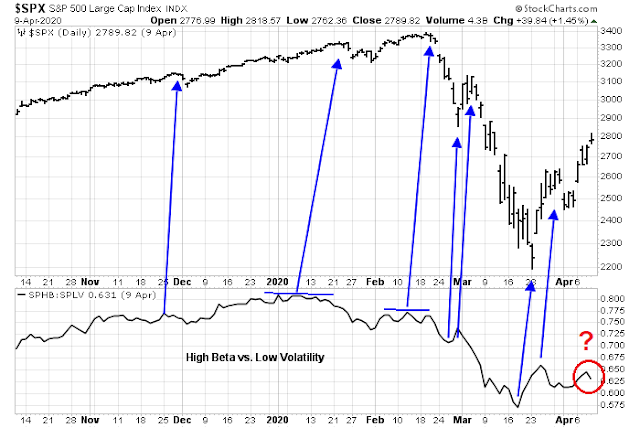 I am not sure how much this matters. My coronavirus pairs did take on a risk-on tone in last week’s rally, but they failed to exhibit higher highs, indicating negative divergences. 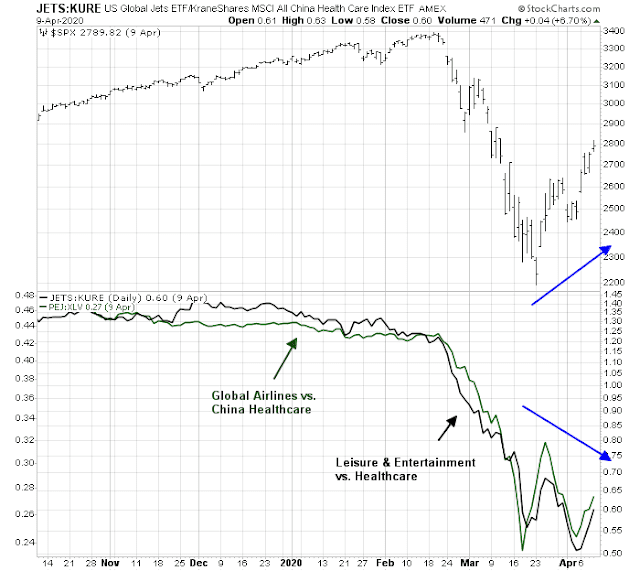 In the short run, breadth has reached an overbought extreme. While overbought markets can stay overbought, do you really want to play those odds? 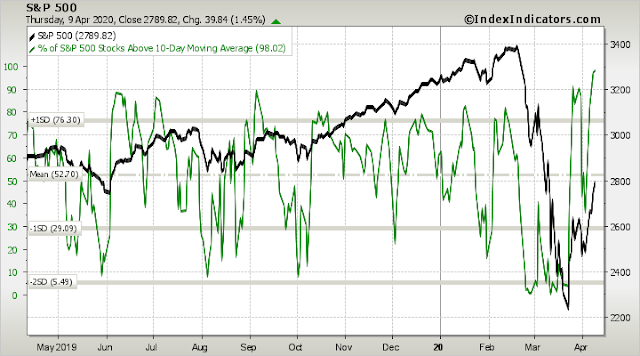 25 thoughts on “A Dash for Trash countertrend rally”