OK, I’m calling it… – Humble Student of the Markets

While I may be jumping the gun on my model readings, I’m calling a recession.

Remember when oil prices tanked in the second half of 2014? The economy experienced a shallow industrial recession in 2015.

While history doesn’t repeat but rhymes, the price war that erupted over the weekend between Russia and OPEC is another threat to the growth outlook. Combined with the already fragile state of the economy from the coronavirus induced supply chain slowdown, it is difficult to see how the US economy can avoid a recession. George Pearkes at Bespoke came to a similar conclusion (via Business Insider). 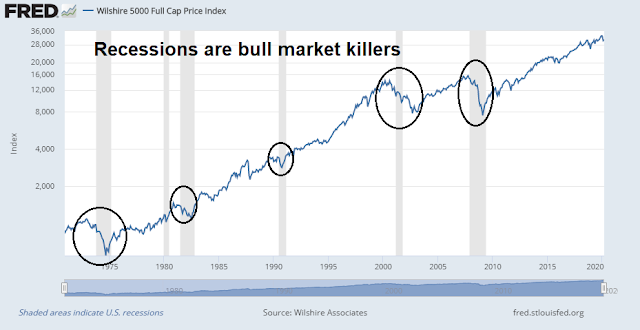 The economy was already weakened by coronavirus induced supply chain disruptions. The latest Fed Beige Book stated that “economic activity expanded at a modest to moderate rate over the past several weeks, according to the majority of Federal Reserve Districts”, with an important caveat:

There were indications that the coronavirus was negatively impacting travel and tourism in the U.S. Manufacturing activity expanded in most parts of the country; however, some supply chain delays were reported as a result of the coronavirus and several Districts said that producers feared further disruptions in the coming weeks…Outlooks for the near-term were mostly for modest growth with the coronavirus and the upcoming presidential election cited as potential risks.

Now the economy is getting hit with an oil price war. The last time oil prices cratered in 2014, the economy experienced a shallow industrial recession in the following year. Today, earnings estimates are already starting to decline owing to coronavirus related concerns. It is difficult to know the full extent of the damage right now, but we know that it will be negative. 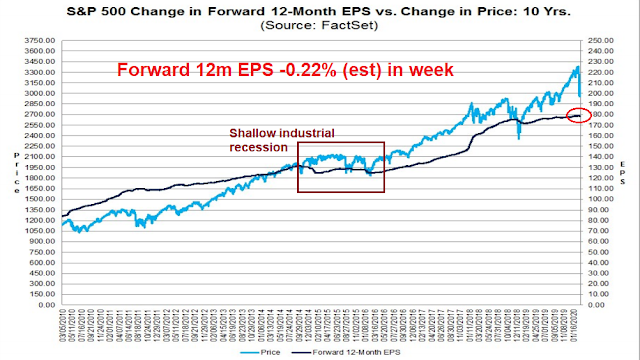 As a reminder, I highlighted the possible effects of a coronavirus sparked recession based on a 2005 CBO study (see A Lehman Crisis of a different sort):

The Congressional Budget Office conducted a study in 2005-06 that modeled the effects of a 1918-like Spanish Flu outbreak on the economy. The CBO assumed that 90 million people in the U.S. would become sick, and 2 million would die. Those assumptions are not out of line with current conditions. The population of the US is about 330 million, so an infection rate of 27% (90 million infected) and a fatality rate of 2% (1.8 million dead) are reasonable assumptions.

The CBO study concluded that a pandemic of this magnitude “could produce a short-run impact on the worldwide economy similar in depth and duration to that of an average postwar recession in the United States.” A severe pandemic could reduce GDP by about 4.5%, followed by a V-shaped rebound. Demand shocks would also be evident, with an 80% decline in the arts and entertainment industries and a 67% decline in transportation. Retail and manufacturing would drop 10%.

I also observed that the monthly MACD indicator had flashed sell signal, but it is not confirmed until we see the month-end closing price. While I am keeping an open mind, it would take a significant rally to avoid a sell signal by month end. 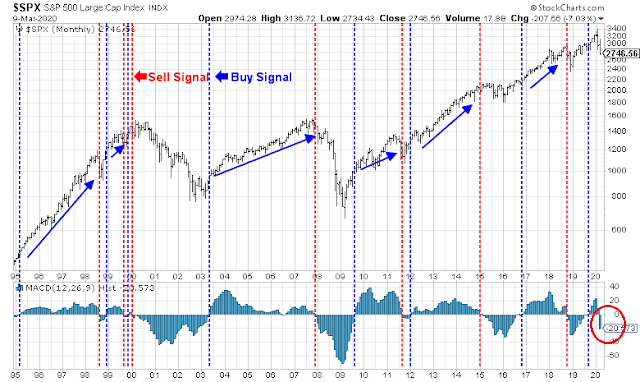 A recession is on the way, and so is an equity bear market.

Accounts with long-term horizons should therefore assume maximum defensive positioning, as defined in their investment mandates, in their portfolios.

I have an Ultimate Market Timing Model that is based on the following two components:

In the long run, equities have shown strong returns in the absence of existential social risks, such as war and rebellion. Trend following model signals can be overly frequent and misleading for investment accounts with long-term horizons. The combination of a macro overlay to a trend following model is therefore an ideal solution for long-term investors who don’t want excessive trading in their portfolios.

In light of the recession call, the Ultimate Model signal has moved from risk-on to risk-off. It should remain risk-off until the Trend Model reverses itself.

There will undoubtedly be rallies, and bear market rallies tend to be of the “rip your face off” variety. Investors should take such opportunities to sell into strength and reduce their equity positions.

In the current environment, traders should focus more on risk than return. While this may sound obvious, it bears repeating. Volatility rises in bear markets, and traders should therefore adjust their position sizes accordingly for risk control purposes. As well, traders should pay special attention to above comment about “rip your face off” rallies.

In the short run, the market was already oversold on Friday and the market is poised for a relief rally. While Index Indicators has not updated their readings at the time of publication, short-term breadth will be even more oversold. 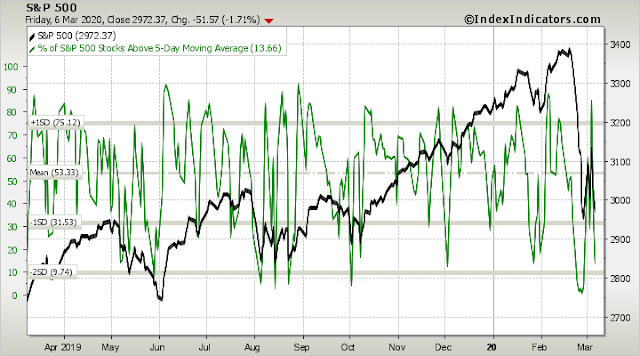 Sentiment readings are so stretched that the market is poised for a 1-2 month face ripping rally (see A stock market roller coaster). We just don’t know when it begins. In light of the negative development on oil prices, it was no surprise that the market fell. What was a surprise was the index exhibited positive RSI divergences while making new lows. 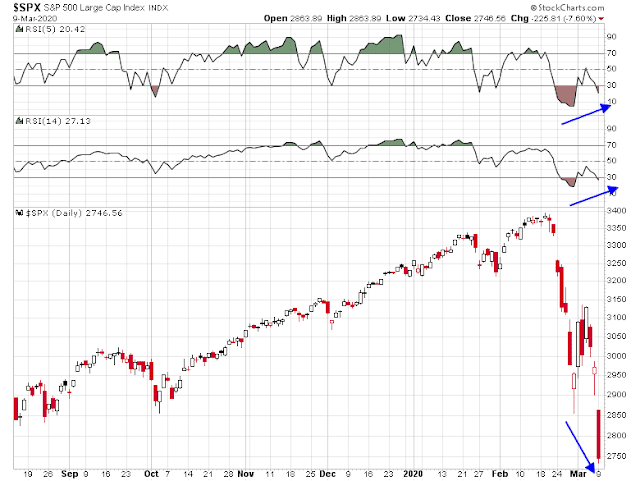 Chad Gassaway pointed out that the short-term record of post -7% single-day losses has been bullish. If history is any guide, we should see a rebound that peaks out after three days with a high win rate. 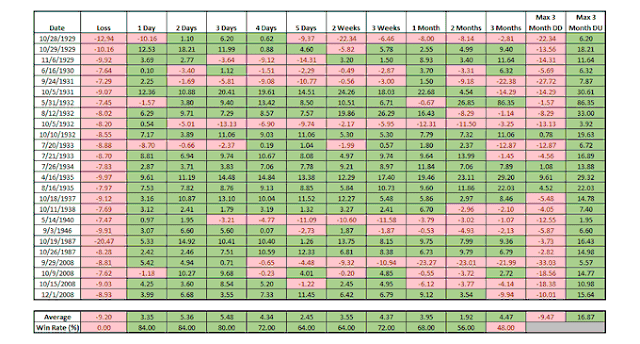 My inner trader initiated a small long position last Friday, and he added to his long today in anticipation of the relief rally.