A stock market roller coaster – Humble Student of the Markets 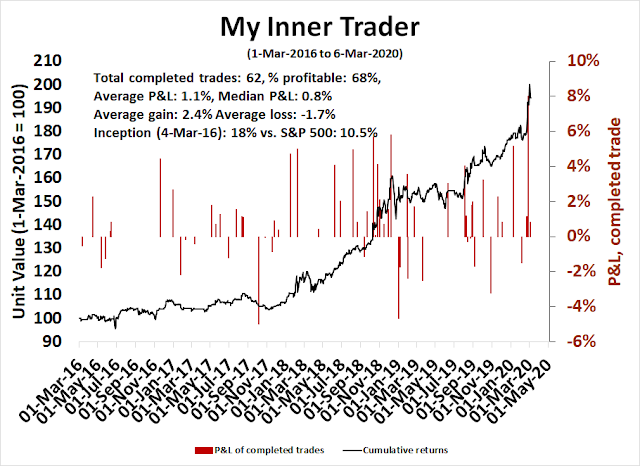 For two consecutive Fridays, the market has rallied into the close to exhibit hammer-like reversal candles. The first candle reversal was confirmed by a massive 4.3% surge on the following Monday, will the same happen this coming Monday? 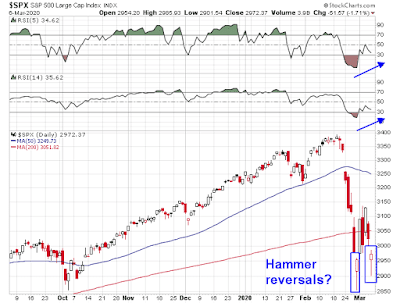 While I am cautiously bullish at a tactical level, it could also be argued that the market has not sufficiently tested the February lows. Should stock prices retreat to test those lows early next week, the bulls can take some comfort that any test would likely be accompanied by positive 5 and 14 day RSI divergences. On the other hand, the bears are likely to defend the highs set in the rally last week, which could make trading the market an interesting challenge.

Investors and traders should brace for more thrills from the market roller coast.

Sentiment buy signals are popping up everywhere. One useful sentiment indicator is the capitulation shown by the NAAIM Exposure Index, which measures the views of RIAs managing individual client funds. This index skidded below its 26-week Bollinger Band, which historically has signaled good bullish entry points to the stock market. 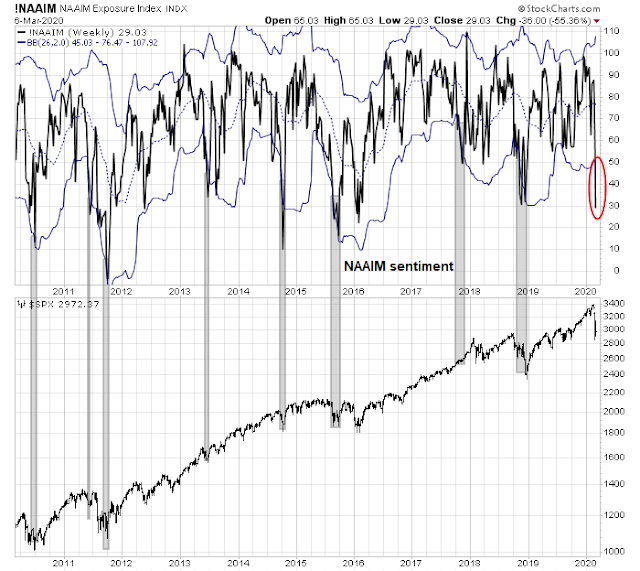 Similarly, Market Vane bulls has fallen to the levels last seen in 2010 and 2011. Readings were only exceeded by the market crash of 2008-09. 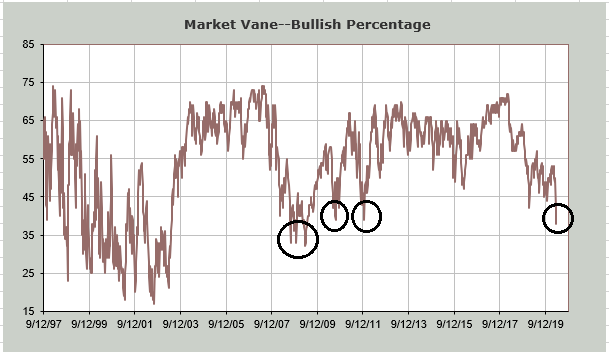 The normalized equity-only put/call ratio has spiked to levels that has marked tradable bottoms in the past. 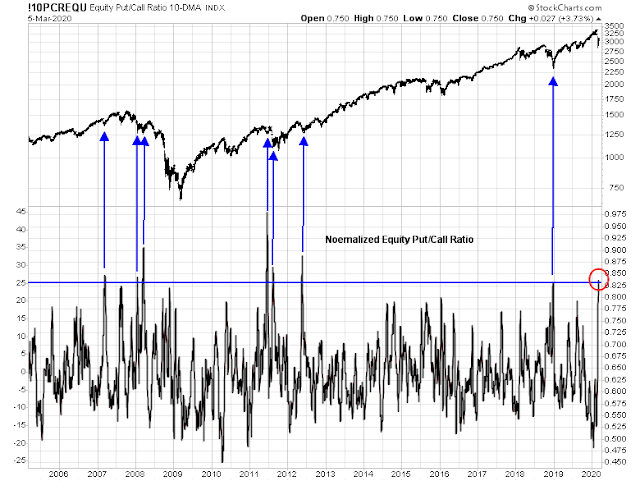 The VIX Index spiked over 50 last week, which is extremely high by historical standards. It did not even reach these levels during the Russia Crisis, or the NASDAQ top of 2000. Similarly, the degree of VIX term structure inversion has only been exceeded during the market crash during the Great Financial Crisis. 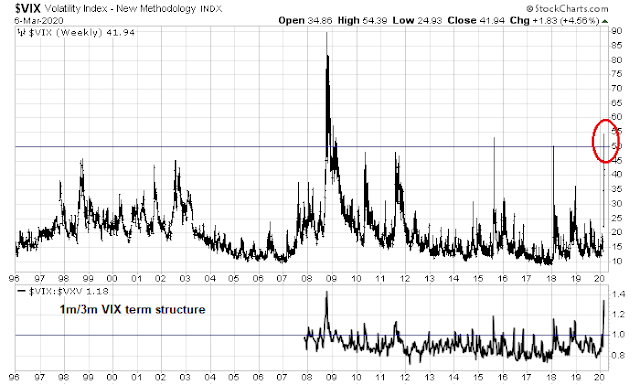 Sentiment models are very washed out.

Arguably, this time is different inasmuch as the market pullback is occurring in conjunction with a Fed inter-meeting rate cut. The Fed doesn’t usually just cut rates out of the blue, this was an emergency action. The word “emergency” should be a flashing warning that there is something seriously wrong with the economy.

From a long-term technical perspective, the monthly MACD model has negated a recent buy signal and flashed an interim sell signal for the market, which can only be confirmed if the index closes at these levels at the end of March. Past buy signals have usually led to prolonged bull phases, and this potential bearish development is highly unusual. 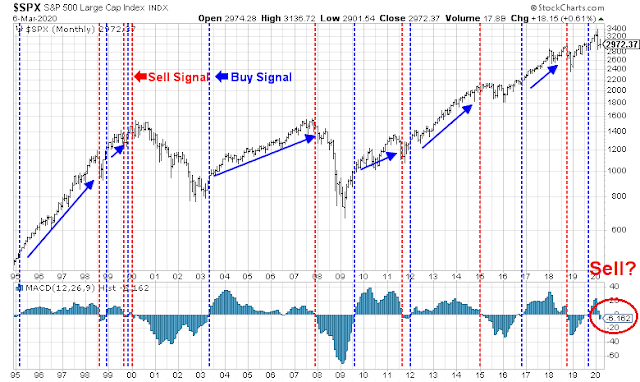 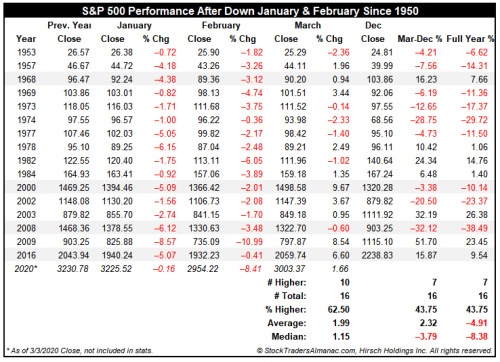 There are also worrisome signs from fundamental and macro perspectives as well. FactSet reported that Street analysts are starting to downgrade their earnings estimates, indicating bearish fundamental momentum. 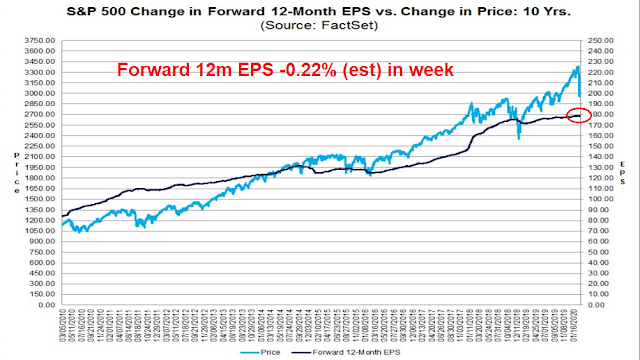 In addition, some cracks are appearing in the labor market. Despite the blow-out Jobs Report, leading indicators such as temporary employment, and the quits to layoffs rate (which will be updated next week in the JOLTS report), are exhibiting signs of weakness. These troublesome signs are showing up during a period that pre-dates any effects of the COVID-19 outbreak in the US. What happens in March, when the full effects of the coronavirus slowdown hit the economy? 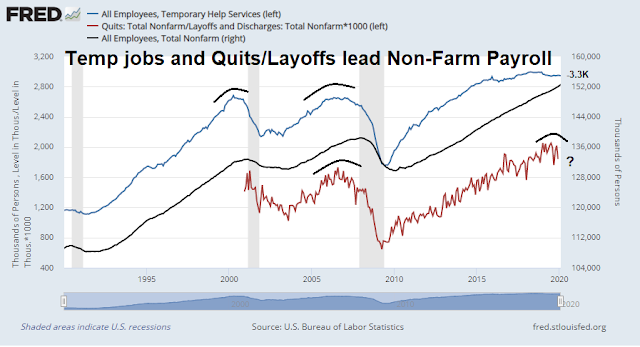 Here is how I resolve the bull and bear cases. Arthur Hill at StockCharts questioned the usefulness of traditional technical analysis techniques because he believes that the market environment has switched from bull to bear:

Even though the S&P 500 is battling its 200-day SMA this week, I am in bear market mode because the breadth models at TrendInvestorPro.com turned bearish for the first time since early September. This means support levels and bullish retracement zones are much less reliable.

If a bear market has indeed begun, one sign of a bottom is insider buying. There were clusters of insider buying during 2008, 2011, and in late 2018. There is no such signs today.

While I am not ready to officially declare a bear market, or a recession just yet, traders should prepare for bear market style volatility, at least for risk control purposes.

Here is how that scenario would play out in the context of my Ultimate Intermediate Bottom Spotting Model. This model flashes a buy signal whenever both the Zweig Breadth Thrust Indicator becomes oversold (check), and the McClellan NYSE Summation Index (NYSI) is negative (check). This model flashed four buy signals during the bear market of 2007-09. In each case, the market staged a relief rally, but the rally failed as stock prices retraced the gains to new lows in each of the cases. 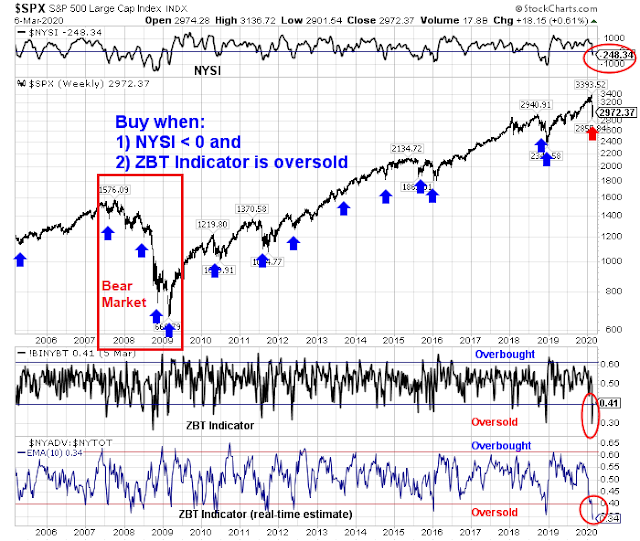 Looking to the week ahead, the market reached an oversold condition consistent with a relief rally. While short-term breadth could weakens slightly further, downside risk is relatively limited. 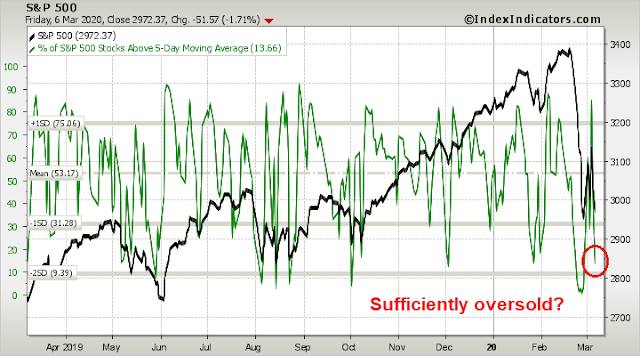 The hourly S&P 500 chart provides some guides to rally targets. At a minimum, the gap at 3000 should be filled. The 50% retracement level of 3124 had acted at resistance in the past, and the bulls will find it to be a formidable obstacle. Above 3124 is the gap at 3260-3330 that needs to be filled, followed by a test of the old highs. I am not holding my breath for an advance beyond the 50% retracement level.

My inner investor is adopting a risk-off profile in his portfolio, with an underweight position in equities. My inner trader took and initial long position on Friday. Should the market weaken further early in the week and the market continues to exhibit positive RSI divergences, he will add to his long positions.