Can the market advance continue? Watch China! – Humble Student of the Markets

The US equity market has risen more or less in a straight line since the Zweig Breadth Thrust buy signal of January 7, 2019 (see A rare “what’s my credit card limit” buy signal). Technically, breadth thrusts are extremely rarely long-term bullish signals. How far can stock price rise from here?

Chris Ciovacco made a recent video which studied the market behavior of breadth thrusts that came to a bullish conclusion. He defined a breadth thrust as % of stocks above their 200 dma rising from 10% to over 70% in a short period. This has happened only twice in the last 15 years. The first time was the rally off the Lehman Crisis bottom of 2009, and the next time was the eurozone Greek Crisis of 2011. 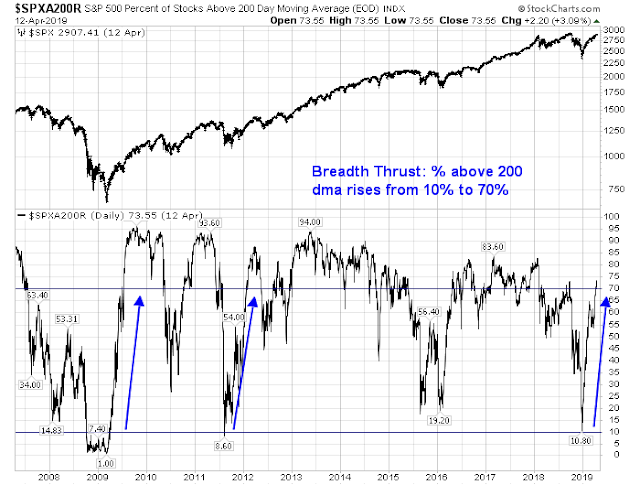 Ciovacco pointed out that the current breadth thrust occurred more rapidly than either 2009 or 2011, which is a sign of bullish price momentum.

He went on to outline the bullish market performance in the wake of these breadth thrusts (warning, N=2).

Here is an “out of the box” answer to the question of further market strength: Watch China.

I have been writing in these pages about a global cyclical recovery for several weeks. The market became excessively cautious in Q4, and it was surprised by the combination of Fed dovishness, and wide ranging effects of Chinese stimulus.

In particular, the market underestimate the degree of Chinese stimulus. A examination of the performance of cyclical vs. defensive stocks by region shows that it was EM that turned first, followed by the US, and now by the other regions in the world. 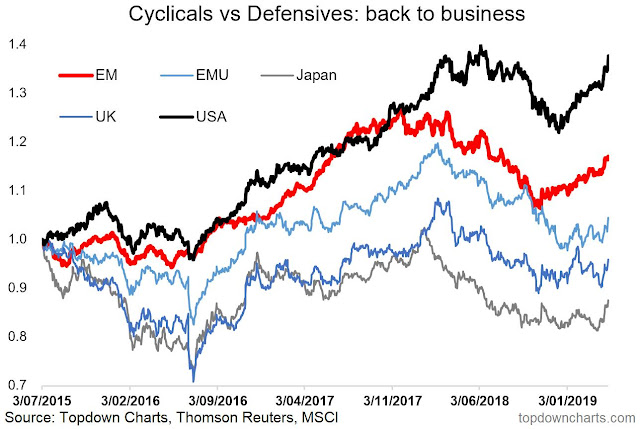 This chart from Tom Orlik of Bloomberg Economics on Total Social Financing (TSF) tells the story of stimulus. Is it any wonder why we are seeing a global cyclical recovery? 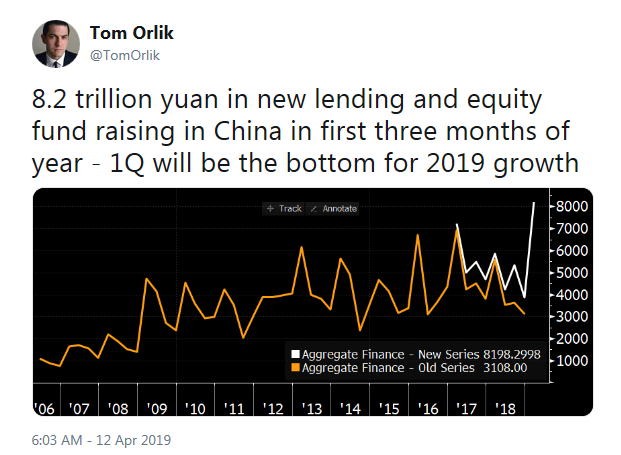 For some perspective, the TSF ramp came to about 9% of GDP. 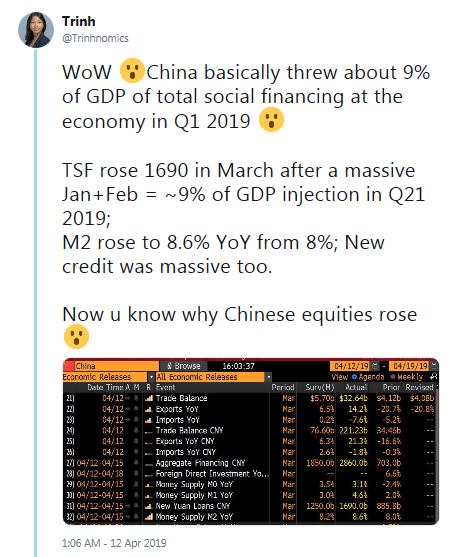 The key question for investors is, “Can this stimulus program continue?”

Leland Miller of China Beige Book explained what happened and his prognosis in a Yahoo Finance interview. Beijing did not want a repeat of the slowdown panic of 2015, so they pulled out all stops and flooded the system with liquidity. Anyone who wanted a loan got it – the local authorities, the stressed SMEs, anyone. What was different about this stimulus program was the cost of debt did not go down as it did with previous programs. Instead, interest rates rose. If Beijing wants to continue its stimulus into Q2 and Q3, then it will have to subsidize financing costs. At some point, the subsidies will be untenable. Miller believes that China is hoping that a trade deal will alleviate some of the growth pressures, and they can take their foot off the accelerator on their stimulus initiative.

Keep in mind that China will be celebrating its 70th anniversary of Mao’s victory in October, and the leadership will not want to be embarrassed by a tanking economy. My personal guess is they will pull out all stops to continue their stimulus until Q3. Then all bets are off.

The first sector to feel the effects of a shift in policy is the highly leveraged property developers. Regular readers will recall that I was closely monitoring large developers like China Evergrande (3333.HK) last October for signs of cracks in the Chinese economy. The share prices of property developers tested their lows in October, but the market did not break.

I had highlighted the China real estate ETF (TAO) as a possible speculative buy candidate last week (see Selections for a new bullish impulse). The performance of this sector may be more useful as a market indicator than a long candidate, as the fortunes of this sector is highly dependent on the Beijing’s whims. While the fit is not perfect, the relative performance of TAO to the Chinese market can be a useful canary in the coalmine of the PBoC’s policy intentions, particularly at relative price performance extremes. As the chart below shows, the relative returns of TAO (bottom panel) roughly coincided with the growth scare in 2015, and in late 2018. 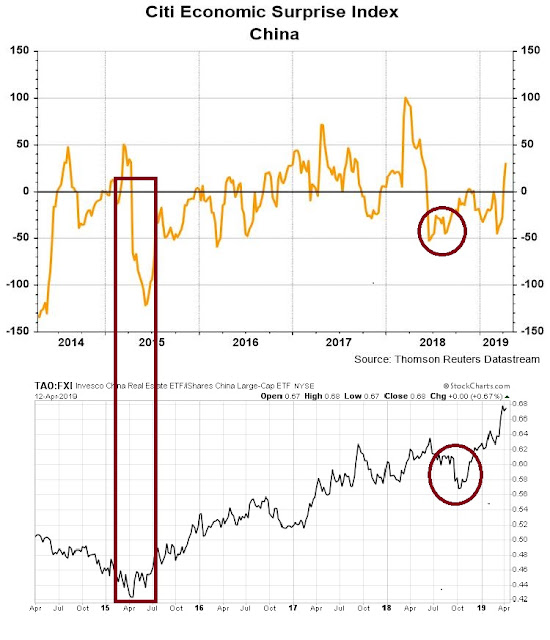 Similarly, we can see how the shares of China Evergrande reacted during the Panic of 2015, and during the eurozone and Greek crisis of 2011.

My inclination is to give the bull case the benefit of the doubt. Technical momentum has historically been a powerful bullish signal. At the same time, keep an eye on the Chinese property sector for signs of fading stimulus.

3 thoughts on “Can the market advance continue? Watch China!”