Selections for a new bullish impulse – Humble Student of the Markets

It is a truism in investing that you should buy when blood is running in the streets. The latest update of NDR’s Global Recession Model shows the probability of a global recession, which is defined as sub-3% growth, at 96.63%. 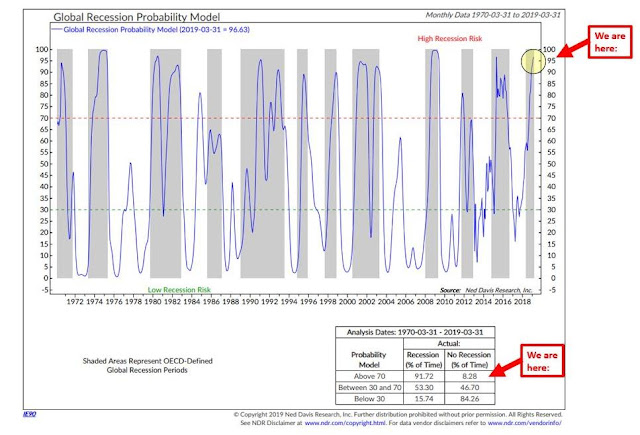 One application of that rule is to buy risky assets when a recession is evident to the public. It seems that we have reached that point, what should we buy?

Let’s start with the good news. Greg Ip at the WSJ wrote that “The World Seems to Have Dodged Recession, for Now”:

If the world was at risk of sliding into recession, policy makers appear to have pivoted in time to prevent it.

In the U.S., the slowdown never got started. March capped a quarter in which jobs grew as fast as they did in the fourth quarter. Growth in private hours worked, a better gauge of business labor demand, actually accelerated.

In the rest of the world, a rise in China’s purchasing managers index in March suggests its slowdown may be ending and a modest improvement in German industrial production in February sparked hopes for the same there. In sum, while recession fears haven’t entirely receded, the panic that gripped financial markets last year now looks misplaced.

Josh Brown, otherwise known as The Reformed Broker, thinks that the recession panic was overdone. He stated on CNBC that the US has never imported a recession from abroad:

Recession fears have been reignited amid weakening global conditions, but recessions have never been contagious and the U.S. is doing just fine, according to Josh Brown, CEO of Ritholtz Wealth Management.

“The consumer is on fire. The small business owner is on fire. Financial conditions have not been easier in 13 years. Money is flowing and businesses are growing,” Brown, also a CNBC contributor, told CNBC’s “Halftime Report.”

“Can you think of a recession from anywhere international that we’ve imported over here? It’s never happened. Even in 1998 when every country in Asia melted down, devaluation of the Ruble, complete banking fiasco all over the place in Latin America, we didn’t have a recession as a result to that,” he added.

The economic stresses that have been manifesting in Europe, China, and Japan are worrying many of a global slowdown. Adding to the fears is the deteriorating U.S. data including durable goods, Markit PMI and manufacturing survey, but Brown said the data is skewed by the government shutdown and will soon recover.

“You will see a bounce back in the data when we get deeper into Q2 right on schedule,” he said.

Jurrien Timmer at Fidelity pointed out that US equities is following roughly the same path as the non-recessionary drawdowns of 1994, 1998, and 2011 (via Callum Thomas). 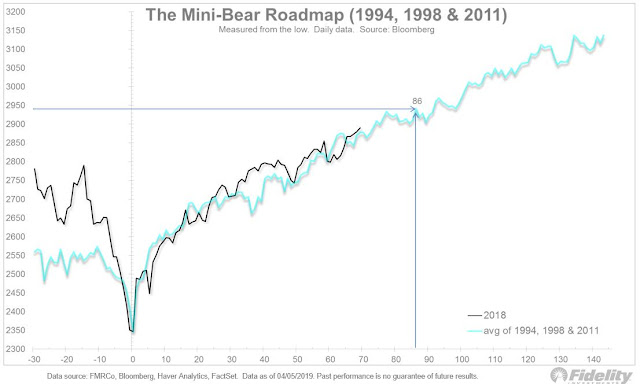 Add to the equation a backdrop of supportive sentiment. The University of Michigan survey of the public’s believe that the stock market will rise has pulled back from a high of 66.7% to 57.1%, While that reading is still a little elevated, there is room for sentiment to become more bullish. 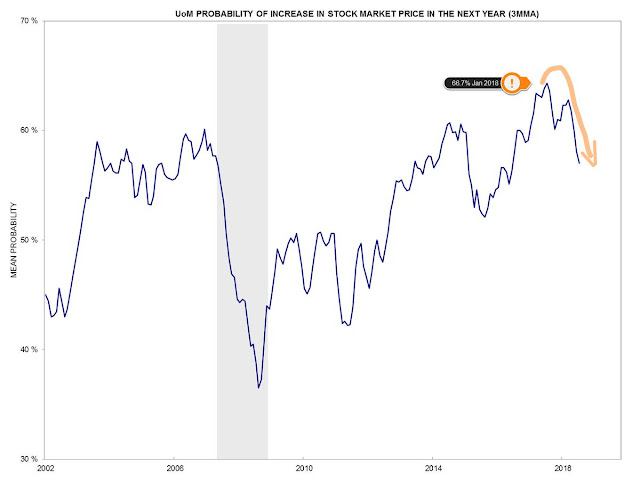 The turnaround from excessive caution about an economic slowdown is showing up in rising price momentum. Brett Steenbarger at TraderFeed wrote on Monday:

What this says to me is that we’re seeing significant upside momentum in stocks. Historically, such momentum has led the market higher, though not necessarily at the same rate previously seen. The main takeaway is that we can’t conclude that we’re heading lower simply because we’re “overbought”. Whether we think the valuations are justified or not, whether we like macroeconomic forecasts or not, equities have found meaningful demand. Perhaps that’s not so surprising in a world of low interest rates and tepid growth: U.S. stocks may offer some of the few havens for yield and growth. It may also be the case that the stock market, which has been kindly disposed to the current U.S. administration ever since the 2016 election, could display similar behavior should odds of re-election increase.

In any case, we’re seeing broad strength and few signs of weakness. A normal correction, given low levels of volatility and volume and the fact that stocks making new 52-week highs are not expanding, is clearly a possibility. If the mood of participants that I speak with is indicative of a more general mood, any such pullback may find interest from frustrated traders late to the party.

In other words, get ready for the dip buyers to stop waiting for the dip and pile in on the long side.

If global stock prices are poised for another bull leg, what should you buy? I have a number of suggestions, both in the US and internationally.

Let’s start in the US. The macro backdrop is a cyclical rebound, and cyclical stocks appear to be the emerging leadership. Industrial stocks (XLI), semiconductors, (SMH) and transportation (IYT) are all turning up relative to the market. 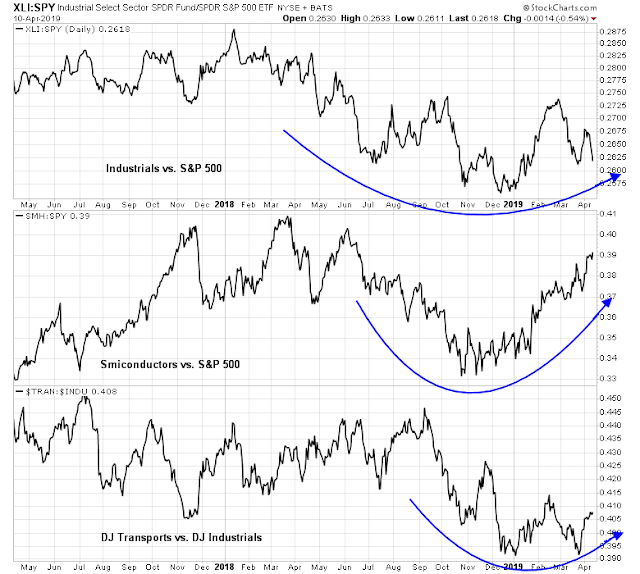 Across the Atlantic, it may be a little too early to be buying cyclicals, especially in light of the latest Trump tariff threat. The following chart shows performance of core and peripheral Europe against the MSCI All-Country World Index (ACWI). Surprisingly, Germany, which is the growth locomotive of the eurozone and its export leader, is underperforming. On the other hand, the pattern is the more “peripheral” the country, the greater the outperformance. The countries exhibiting the broadest based relative bottoms are Italy and Greece. 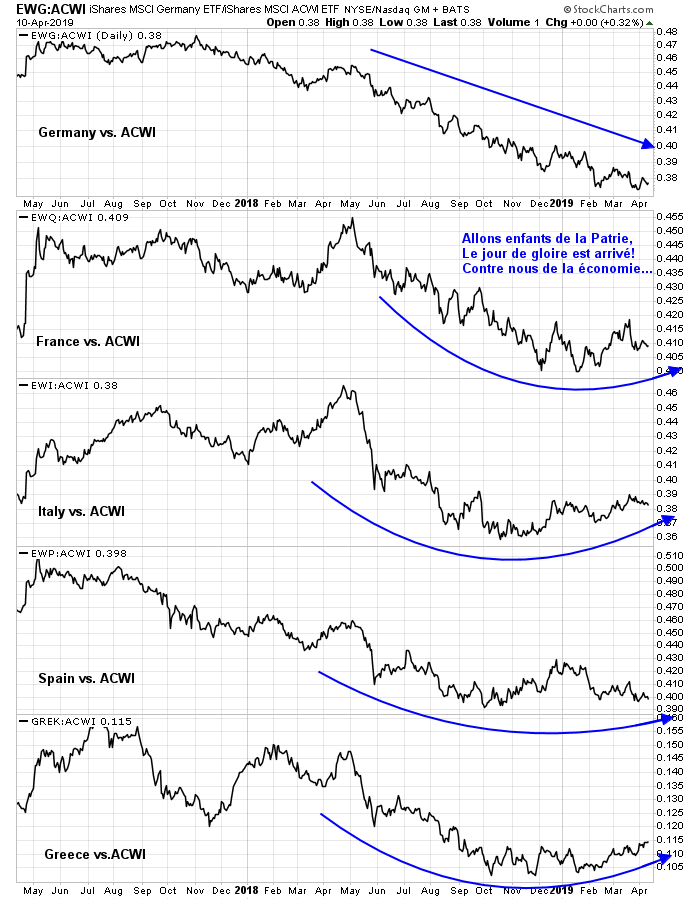 Yes, that Italy. That Greece. For some perspective of how much Greece has recovered, just take a look at this chart of the yield on 10-year Greek debt. In Europe, it seems that the dominant theme is contrarianism and financial healing. 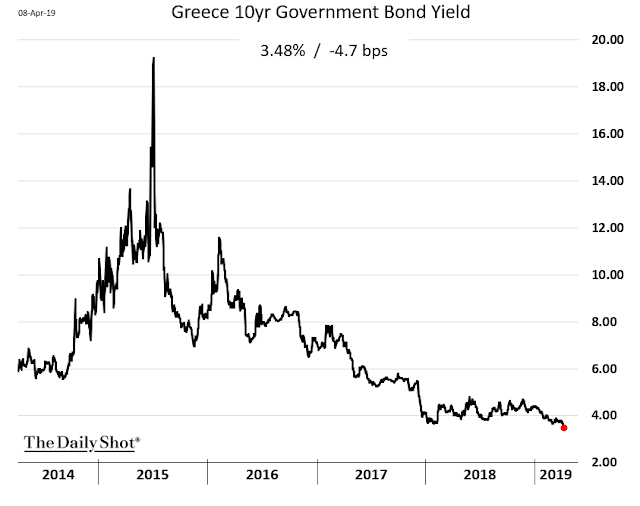 The ACWI relative charts of China and her major Asian trading partners tell another story. The country showing the best momentum is Hong Kong. Despite all the excitement over a US-China trade truce, and China’s stimulus program, the Shanghai market has been range-bound against ACWI for 2019. The other Asian markets are also range-bound relative to ACWI, though two (Singapore and South Korea) are tracing constructive double bottom patterns. 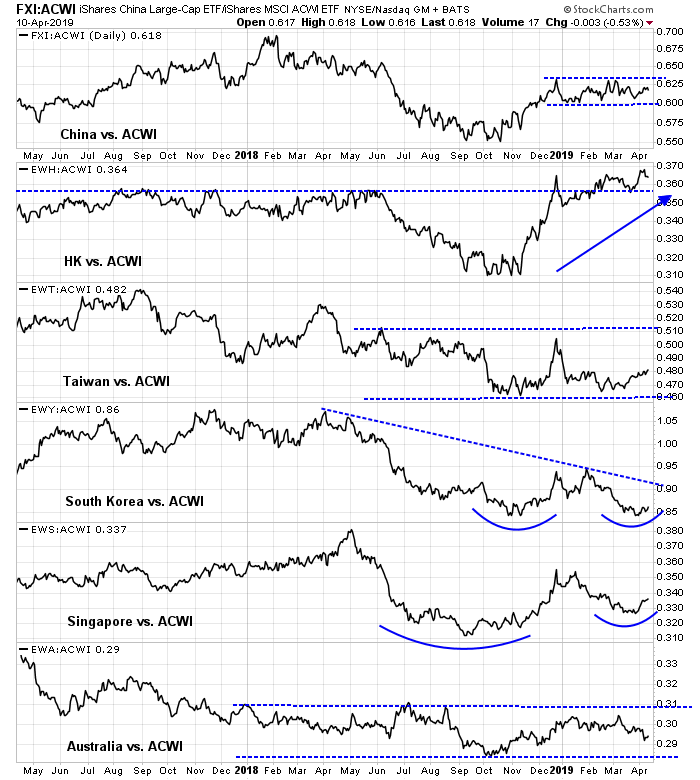 In Asia, you might want to bet on momentum. A really speculative choice might be the Chinese real estate stocks (TAO). I am indebted to my former Merrill Lynch colleague Fred Meissner of The Fred Report for bring this to my attention, though he does not explicitly recommend a position. The relative performance of TAO to both China (FXI) and ACWI has been astounding. Though TAO is a little extended, it is an aggressive way of gaining exposure to Beijing’s stimulus programs, whose effects appear quickly in the highly leveraged real estate sector. 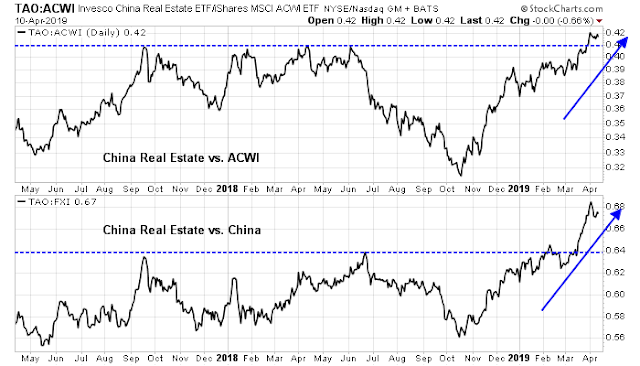 There you have it. Bullish investors can position themselves with a diversified selection of investment themes and factors around the world, with exposure to a cyclical rebound in the US, beaten up contrarian exposure in Europe, and momentum in Asia.

21 thoughts on “Selections for a new bullish impulse”