Dismounting from the market rodeo – Humble Student of the Markets

It has been over a month since the December 24 market bottom, and stock prices have rallied strongly since that bottom. Indeed, price momentum has continued to lift prices even after the Zweig Breadth Thrust buy signal of January 7 (see A rare “what’s my credit card limit” buy signal).

Employing a rodeo metaphor, Wilson on Monday urged his clients to “dismount” as the market’s rally since late 2018 is starting to look precarious.

“Maybe the bull ride since Dec. 24 has not gone a full ‘8 seconds’ but we’d look to dismount anyway—we’re close enough and bulls can be dangerous animals,” he said in a report, referring to the number of seconds a bull rider is required to stay on to earn a score for a ride…

“We struggle to see the upside in hanging on just to see how long we can. We think it is better to hop off now and rest up for the next rodeo,” said Wilson.

I would tend to agree. At a minimum, investors and traders face a number of potential landmines this week.

The FOMC began a two-day meeting today, and we will see the statement Wednesday. Expectations are building for a dovish tone, with a pause in rate hikes, and a possible taper of the central bank’s balance sheet runoff.

Fed Chairman Powell’s grace note was to float the possibility of tapering the pace of balance sheet reduction (QT). The market grabbed it, took it as gospel, and next week we will see whether the Fed delivers. If they do not, they will probably wish they had, and then taper at the March meeting. They could, of course, skip the QT adjustment half-step entirely and go right to a clean 25bp cut in the funds rate, but the data-dependents on the FOMC would not take kindly to such a leap.

Authers believes that expectations becoming a little too unrealistic:

In other words, Powell will enter Wednesday with the market braced for him to make a U-turn for the ages, a complete 180-degree turn from his views on the balance sheet as expressed only last month. There is substantial risk of disappointment, but whatever he says after the FOMC meeting, it will matter more than Ross’s admission that trade peace with China remains “miles and miles” away.

Kevin Muir, or The Macro Tourist, thinks that Powell is ready to cave on the question of balance sheet adjustment, or quantitative tightening, in the wake of the recent WSJ article entitled “Fed Officials Weight Earlier Than Expected End to Bond Portfolio Runoff”:

Which leads me to three different possibilities:

1. Powell somehow believes that surprises are bad and that it is important for the information to be eased out into the market. I guess that might be the case if you are talking about bad news, but it seems to me that good news should be ripped off like a band-aid. But hey – I don’t have an army of PhD economists telling me the optimal method of communicating my waffling, so I don’t know. Maybe this is just messed-up Fed thinking at work.
2. Maybe the WSJ has gone rogue and this story is not a leak but merely the “connecting of dots” from previous Fed communication. If you look carefully, there is little new information.
3. Someone – either another faction at the Fed or maybe even the White House – planted the story in an attempt to force the Fed to change QT policy.

I know the last two options seem a little extreme.

Here is the more sober interpretation of the Fed’s likely actions this week from Tim Duy:

The Fed will hold steady this week. I anticipate that barring any evident inflationary pressures, the Fed will be content to stay on the sidelines through at least the middle of the year. I think the underlying data will still prove too strong for central bankers to signal that they are at the end of the rate cycle. They will though want to communicate that regardless of their expectations, actual policy will be made with patience and flexibility. They will also want to communicate that the ultimate size of the balance sheet remains a technical issue at this point.

If the market expectations have built up for an abrupt dovish shift from the FOMC, then prepare for disappointment from the market. For what it’s worth, Rob Hanna at Quantifiable Edges highlighted the historical record of positive equity market returns on FOMC days between the Powell Fed and his predecessors.

The second potential market landmine that the market faces are the upcoming US-China trade talks. A senior Chinese delegation is arriving in Washington on Wednesday to meet with American officials for two days of scheduled talks. Treasury Secretary Steve Mnuchin stated that the main issues are market access, making sure there aren’t forced ventures, not forced transfers of technology, and a monitoring mechanism if and when they reach an agreement.

The WSJ highlighted the really difficult issue of the domination of China’s SOEs in key industries:

China’s state firms dominate industries that U.S. firms want to enter, including telecommunications, energy, banking and insurance, and have made inroads into industries Mr. Xi is staking out as top priorities for the future. Beijing and local governments, for instance, have announced more than $100 billion in financing, mainly to state-owned firms, to develop a domestic semiconductor industry.

State-owned construction firms are building Mr. Xi’s ambitious Belt-and-Road infrastructure projects across Asia and Africa, while state-owned banks are often called on to ramp up credit to keep the Chinese economy from slowing too rapidly.

One Chinese economist calls state businesses “the legs of the Communist party.”

In effect, the Americans are asking the Chinese to abandon their industrial strategy. It would be the equivalent of asking the US to abandon English style system of jurisprudence and adopt the Napoleonic Code.

The Trump administration insists that Beijing cut tariffs and regulations that benefit state firms and block U.S. competition. It also wants China to reduce subsidies, preferential loans and other help that give state-owned firms an added advantage.

Mr. Xi and his allies see state firms as a source of employment and thus social stability and a way for China to compete internationally through national champions in steel, aluminum, construction and other fields. They are also an important lever to manage the economy, in part because the Communist Party plays a big role in selecting top managers.

In addition, the official US request for the extradition of Huawei CFO Meng Wanzhou is likely to put a damper on negotiations. CNN summarized the key points of the US indictments in the extraction request:

Despite all the soothing American talk about the Huawei case being separate from the trade discussions, it really is not. The indictments are part of a broader effort of economic warfare against emergent Chinese 5G technology. The belligerent tone will make it difficult for both sides to back down during the trade talks.

Ultimately, the decision on whether to cut a deal will be political. Is Trump sufficiently pressured by stock market instability to sweep these bigger issues under the rug for another day? The best case that we can hope for out of these meetings is an agreement for an ongoing process to keep talking. The worst case is the talks break down.

Even though my base case scenario still calls for a deal to be made, the risks are asymmetric and tilted to the downside.

In addition, there is the earnings season wildcard. There are a lot of large cap bellwethers reporting this week, and the market reaction is likely to add volatility. 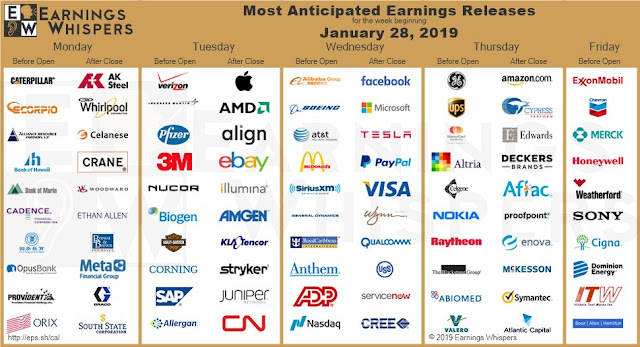 Subscribers received an email alert this morning (Tuesday) that my inner trader had taken profits on his long positions and reversed to the short side. Just don’t ask me what the downside target is, I have no idea. All I know is risk/reward is tilted to the downside. One thing at a time.

11 thoughts on “Dismounting from the market rodeo”