Recession ahead? Fuggedaboutit! – Humble Student of the Markets 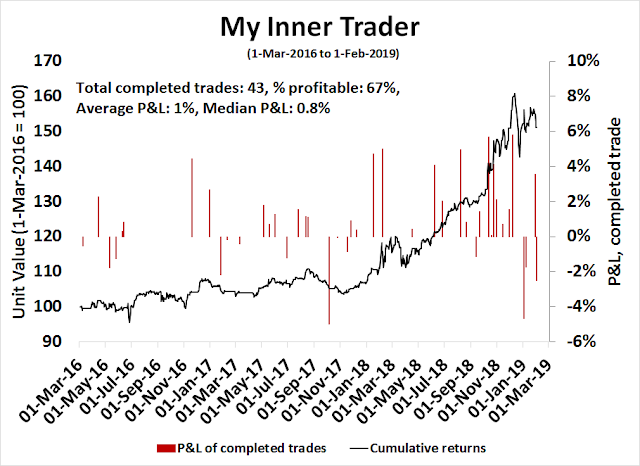 Confident about a slowdown?

Recently, a number of prominent investors and analysts, including Jeff Gundlach, David Rosenberg, and Ed Yardeni, have warned about an ominous recession signal from the Conference Board’s consumer confidence survey. Ed Yardeni’s analysis of the present situation to expectations spread was especially ominous for equity investors.

Fuggedaboutit! The American economy isn’t going into recession. Call me bullish, but with a caveat.

To be sure, there are numerous signs that confidence indices of all stripes are rolling over, starting with the University of Michigan consumer confidence index. 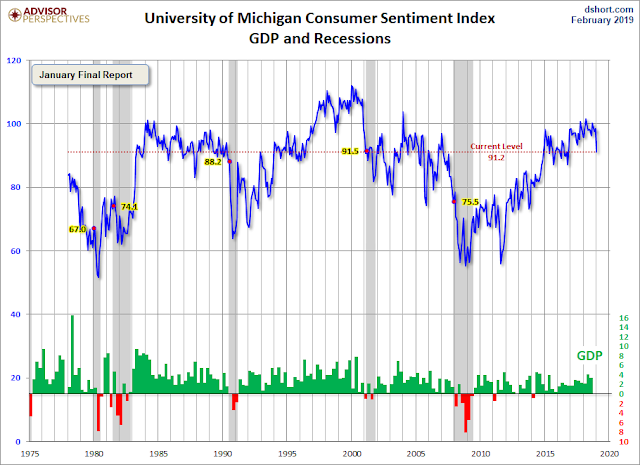 NFIB small business confidence is coming off its highs. 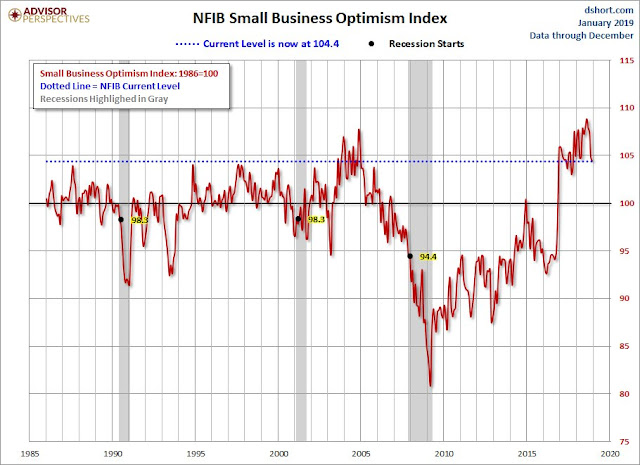 However, Renaissance Macro pointed out the recession probability signal based on present conditions to expectations spread recession indicator is at 100%, but it has been elevated since mid-2014. This is not a reliable and actionable indicator. 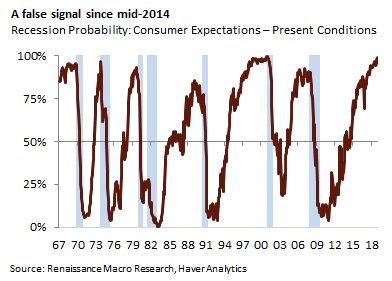 If you are worried about the American consumer, then ask yourself why real retail sales are continuing to make new highs? Past recessions have usually been preceded by a peak in real retail sales. 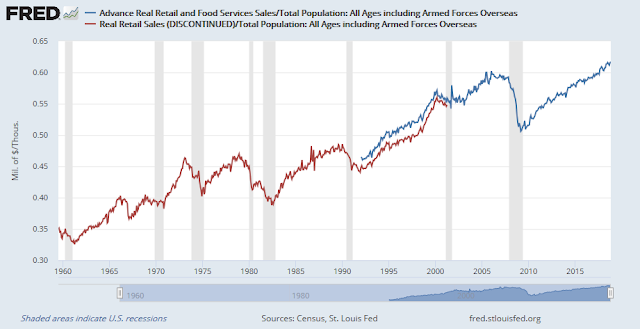 Over on Wall Street, the relative performance of consumer discretionary stocks have been rising. Most notably, the turnaround even as stock prices plunged in December and continued as the market rallied. 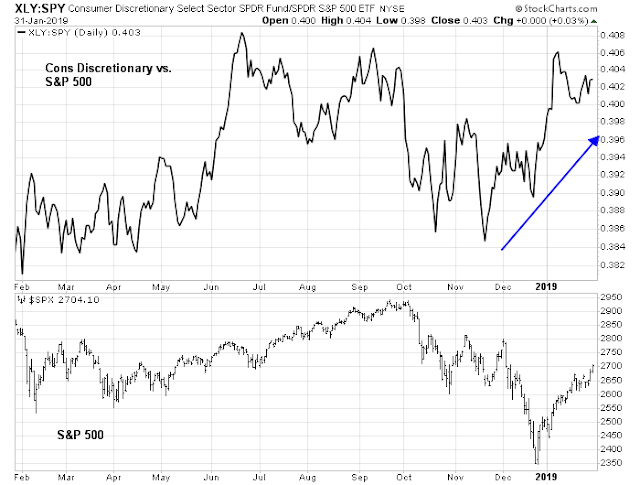 In addition, the housing sector, which is the ultimate form of cyclical consumer durable, is showing signs of a turnaround. November new home sales surged and handily beat Street expectations last week. In addition, the relative performance of homebuilding stocks have begun to turn up as long rates have fallen. Similar the pattern of consumer discretionary stocks, this group’s relative uptrend occurred ahead of the stock market selloff last December. 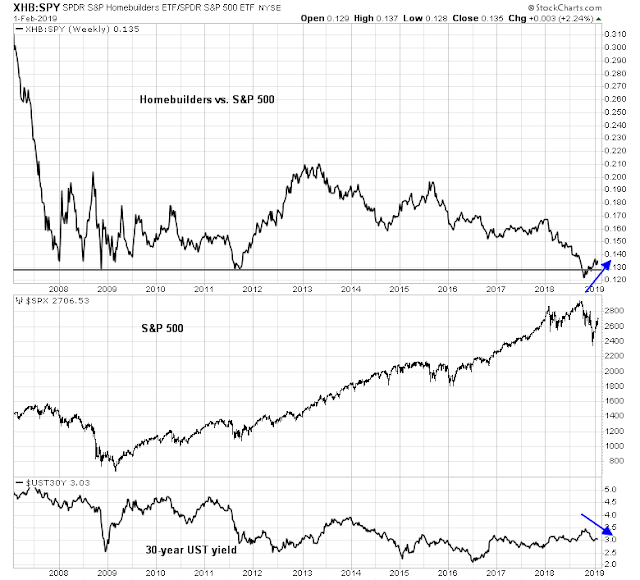 Do these charts look the market signals of a weak consumer to you?

This doesn’t mean that equity investors should entirely shrug off downside risk and the bulls won’t have clear path up to all-time highs. Prepare for some volatility as there may be a growth scare ahead.

I am indebted to the work of New Deal democrat, who has been monitoring high frequency economic data and categorizing them into coincident, short leading, and long leading indicators. This framework is highly useful for understanding the growth outlook in different time frames. His latest update has pointed to persistent readings of short-term weakness that will become evident mid-year, but a long-term (one-year) strength indicating low recession risk.

The long-term forecast and the nowcast are slightly to the positive side, while the short term forecast is slightly negative for the fourth week in a row. Some of this is due to the government shutdown, so we will have to wait several more weeks to see is the changes are real.

The signs of short-term weakness into mid-2019 could be mistaken by analysts as the basis for a possible recession. Cue the growth scare going into Q2. Troy Bombardia also observed that the ECRI Weekly Leading Indicator has been consistently negative, which is another worrisome sign.

Another warning sign for equity investors is the continuing downgrade in forward 12-month EPS estimates. To be sure, stock prices have held up well during a Q4 earnings season whose beat rates are roughly in line with long-term averages, but how long can stock prices defy the gravity of negative fundamental momentum? 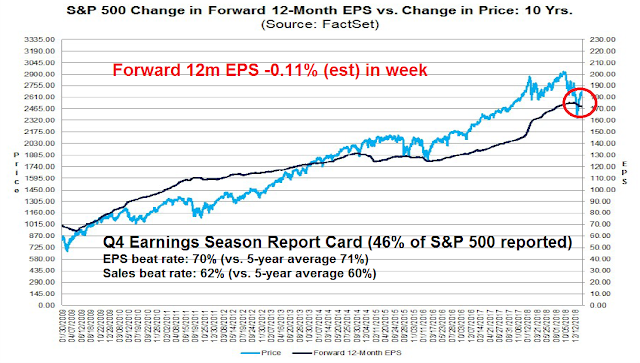 The chart below depicts quarterly actual and estimated earnings. If New Deal democrat is right about economic weakness in Q2, then equity investors should be prepared for either downward revisions in Q2 EPS estimates, or downside reporting surprises. 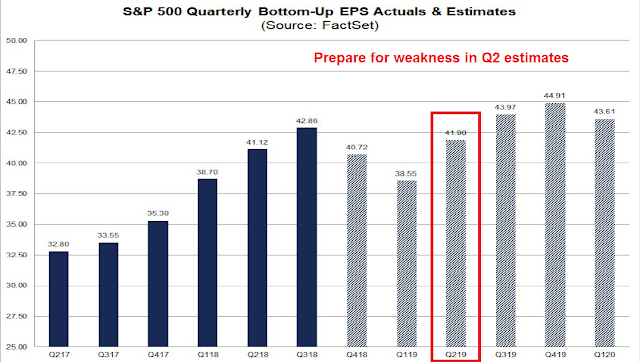 Waiting for the “you won’t want to buy” moment

For now, the current newsflow of a dovish Fed and a likely US-China trade deal is tilting sentiment and price momentum bullishly. 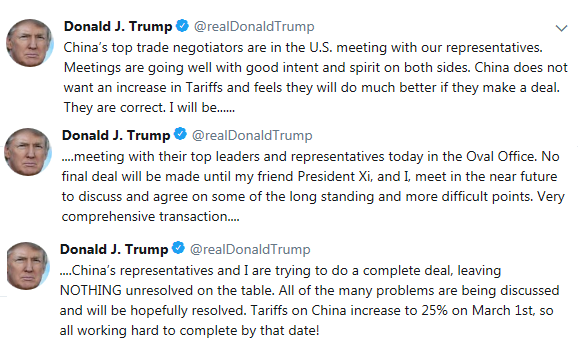 However, I am concerned that the late December bottom seemed too easy. II sentiment has normalized, and % bears spiked only briefly above % bulls. These readings are inconsistent with past durable intermediate term bottoms. 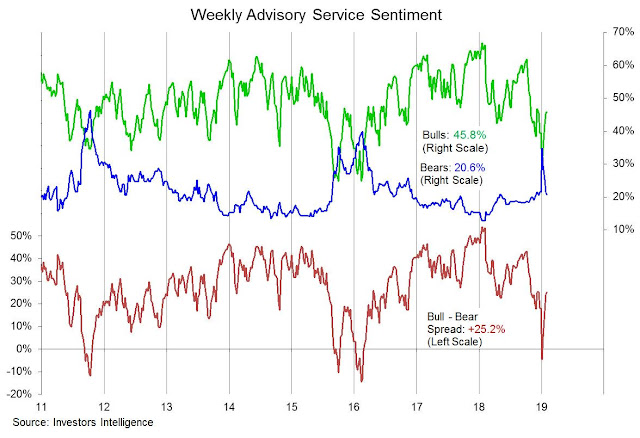 Another worrisome sign evident during this rebound rally is the lack of apparent leadership. The relative performance of NASDAQ and small caps are not showing signs of sustainable leadership. If this rally were to carry itself further, what’s going to lead the way? 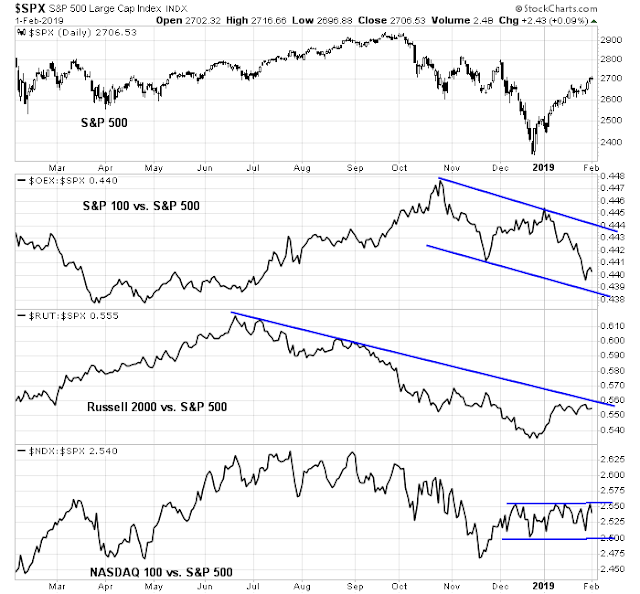 There is a trader’s adage on Wall Street that when it’s time to buy, you won’t want to. There are too many investors and traders who are too eager to buy the dip.

It is difficult to see how the market could fall without some bearish catalysts. We have to wait for the “you won’t want to buy moment”, which may occur when the market hits the growth scare speed bump in the coming weeks.

In conclusion, the US economy is unlikely to enter a recession based on long leading indicators, barring a full-blown trade war. However, investors should expect a growth scare going into Q2. In light of the powerful short-term price momentum in stock prices, timing the inflection point between rebounding optimism and a growth scare will be a tricky task.

I remain cautiously intermediate term bullish on equities. However, should the growth scare become the dominant narrative in the coming days and weeks, it could become the trigger for a re-test of the December lows. If that were to occur, investors should look through the “you won’t want to buy” fears to step up and load up on equities.

Looking to the week ahead, the market may be nearing a key technical inflection point. Rather than make a decision on the likely direction, my inner trader believes it would be more prudent to allow the market action tell us the likely short-term direction.

The intermediate term bull case rests with the continuation of positive price momentum. The SPX exhibited a positive MACD crossover on the weekly chart. The 10-year record of past signals have been mostly bullish (blue vertical lines) with only a small minority that resolved bearishly (red lines). 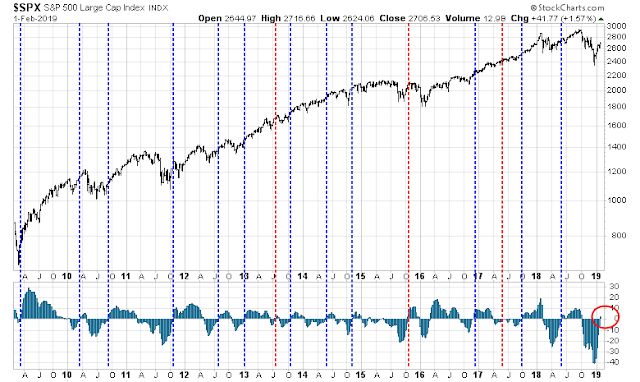 On the other hand, I remain open to the possibility of a W-shaped bottom, especially in light of the likely economic softness starting Q2. A study of market history by Andrew Thrasher concluded that the market needs to clear the 100 and 200 dma in order to reduce the risk of a re-test of the December lows.

Going back to 1960, after a 15+% decline while the market has remained below its 100-day and 200-day Moving Average, the risk of a retest or a lower high were high. But once we cleared these intermediate and long-term MAs then the risk diminished.

Troy Bomardia’s historical studies came to a similar conclusion.  Most retracements of “crash and rally” patterns stall either at the 50% retracement or 200 dma. However, they can turn back higher, and strength can persist all the way to all-time highs before retreating.

So where does that leave us? The SPX rallied through a key downtrend last week, indicating persistent strength, which is bullish. However, the index ended the week just below its 100 dma, as well as the 61.8% Fibonacci retracement level. In addition, the VIX Index (bottom panel) closed Friday just shy of its lower Bollinger Band, which are levels where past stock market rallies have begun a pullback. 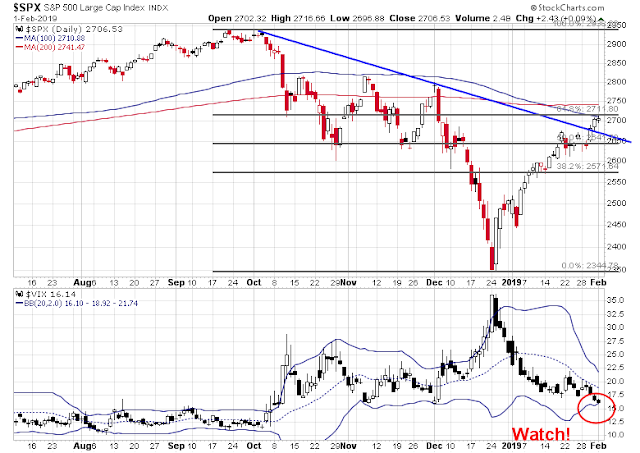 Breadth indicators offer little clue to direction. On one hand, the market is overbought, but one of the most bullish things a stock market can do is become overbought and stay overbought. On the other hand, readings have pulled back from an extreme overbought condition that is reminiscent of the pattern displayed after the last Zweig Breadth Thrust buy signal in 2015 when the rally stalled and prices pulled back. 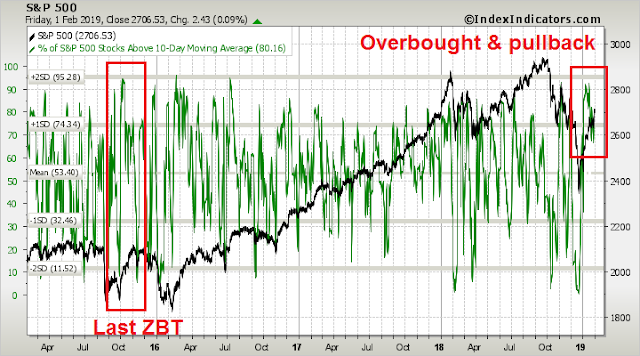 My inner investor is neutrally positioned at roughly his policy asset weights. My inner trader is stepping aside until the market can flash further clues to market direction.

5 thoughts on “Recession ahead? Fuggedaboutit!”