Important questions for the bond and stock markets

As the 10-year Treasury yield staged an upside breakout at 2.6%, and luminary investors such as Bill Gross, Jeff Gundlach, and Ray Dalio have declared the bond bull to be over, I have a number of key questions for the markets. First and foremost, “What’s the pain trade?”

How these questions are resolved will also have important implications for the future direction of stock prices.

Which signal do you believe?

One of the most important question for the bond market is, “Which signal do you believe?”

As the chart below shows, past tests of the downtrend in 10-year Treasury yields has coincided with yield curve inversions. The only exception was in 1994-95. Even then, that episode saw the yield curve flatten dramatically. 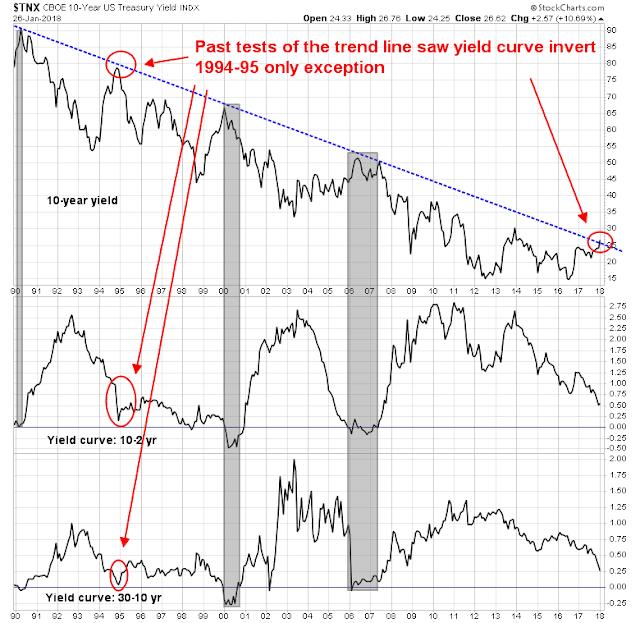 Fast forward to 2018. The yield curve is flattening, but nowhere near inversion. The 2-10 spread has been volatile and it has been bouncing between 50bp and 60bp. The 10-30 spread flattened to 25bp, which is a cycle low, but neither the 2-10 nor the 10-30 spreads are inverted.

Here is the critical question: “Do you believe the signal from the upside breakout in yield, or the yield curve?”

If you believe that the yield curve is flashing a false signal, and it should really be inverted because central bankers have distorted its shape with their endless QE programs, then the economy is nearing recession and investors should therefore adopt a risk-off posture in their portfolios. If, on the other hand, you believe in the validity of the yield curve signal, which indicates that the economy is far from an inversion and therefore a recession warning, then the upside breakout is a response to rising inflationary expectations, then the bond market is indeed entering a bear market.

Here is one way to resolve that conundrum. Experienced bond investors understand that bond yields are correlated with growth expectations. As the chart below shows, 10-year Treasury yields have been tracked the Citigroup US Economic Surprise Index (ESI), which measures whether macroeconomic releases are beating or missing expectations. 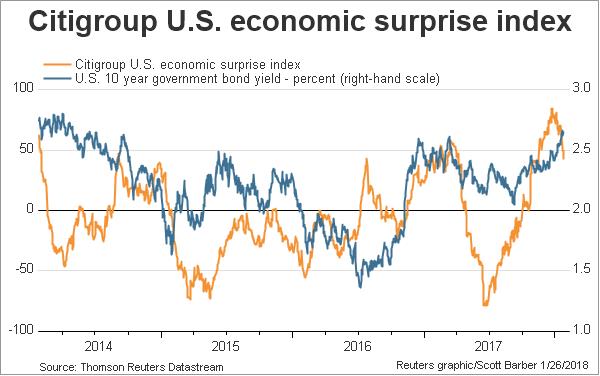 Here is another important question, “As economic data have disappointed and the ESI fallen in the last few weeks, why haven’t bond yields followed?”

Even before the Q4 GDP miss last Friday, Nordea Markets pointed that regional Fed indices were coming below expectations. 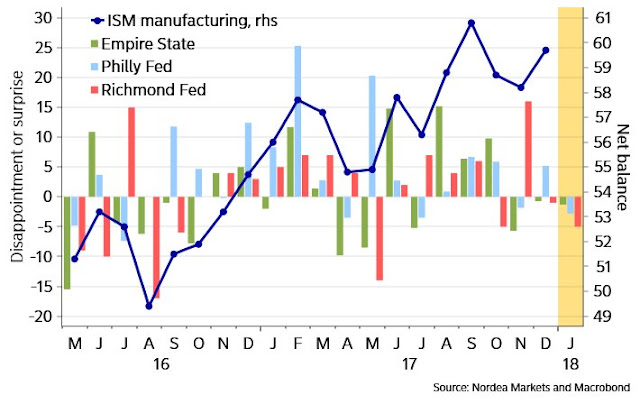 Last Friday, the headline Q4 GDP came in at 2.6%, which was well below Street expectations of 3.0%, the Atlanta Fed’s GDPnow nowcast of 3.4%, and the New York Fed’s nowcast of 3.9%. Moreover, the GDP Deflator came in ahead of expectations, indicating rising inflationary pressures. That’s growth bearish, right?

There was, however, some debate about the underlying strength of the American economy based on the internals of the GDP report. Ryan Detrick of LPL pointed out that growth was actually quite good once you strip out the inventory and trade effects. 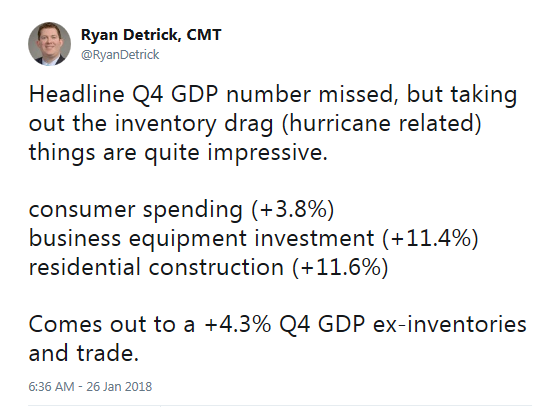 David Rosenberg, by contrast, chose to focus on the negatives.

Rosenberg came to an ominous conclusion for stock and bond prices. 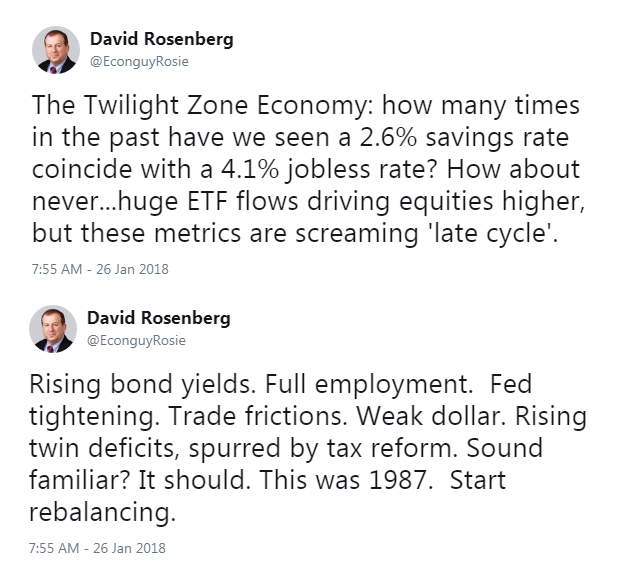 Who is right? There are signs that the market may see a downside growth surprise in the near future. The chart below shows the copper/gold ratio (red line), which is a highly sensitive indicator of cyclical growth, and the stock/bond ratio (grey bars), which measures risk appetite. The bottom panel shows the rolling one-year correlation of these two series, which validates the effectiveness of the copper/gold ratio indicator. As the chart shows, the copper/gold indicator is starting to roll over, which is a signal that global growth momentum may be stalling. 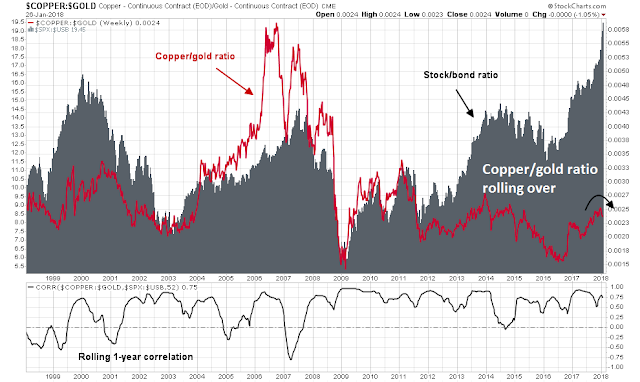 Nautilus Research also found that the stock/bond sentiment is at an extreme. Such conditions have historically signaled bond market rallies and weak stock markets. 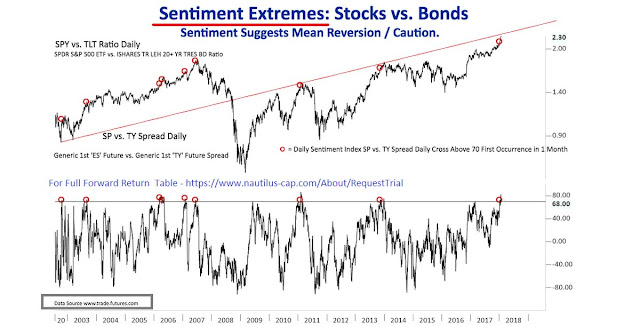 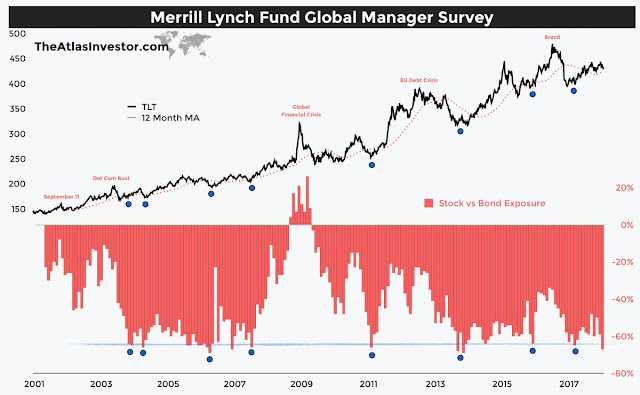 After the latest upside yield breakout and everyone loudly proclaiming the death of the bond bull, it appears that bond prices are poised for a rally based on disappointing growth expectations. That’s one pain trade the market is setting up for. Such a scenario is equity bearish. In light of the recent market melt-up, I remind readers of Bob Farrell’s Rule #4: “Parabolic markets go further than you expect, but they don’t correct by going sideways.”

Buy when bond blood is running in the streets

Admittedly, buying bonds and interest sensitive issues today is like trying to catch a falling knife. However, there are a number of other important investment implications to the bond rally thesis, and there are opportunities in crowded extreme positions where the proverbial blood is running in the streets (another pain trade).

The following chart provides a graphical illustration of the correlation between yields and commodity prices. 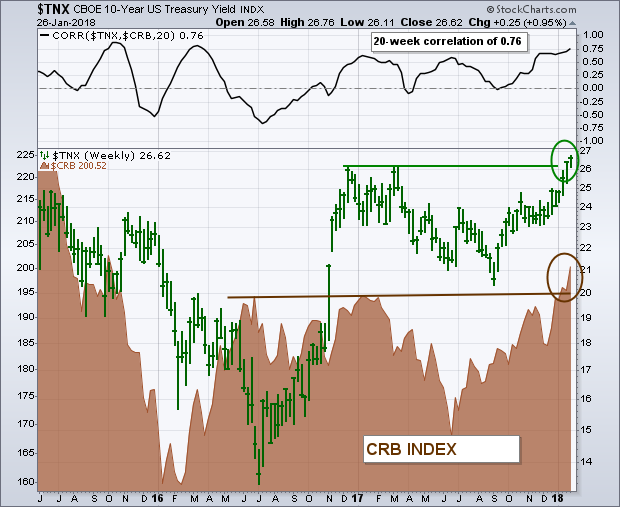 The chart below shows the relative performance of interest sensitive sectors of the stock market (top panel), and the inflation sensitive sectors of the market (bottom panel). If bond prices were to rally, then investors should focus on buying the former and avoiding the latter. Under such a scenario, inflation sensitive sector such as energy, gold, and mining may need more time to consolidate sideways relative to the market. Similarly, growth and momentum stocks are likely to lose their mojo and correct. 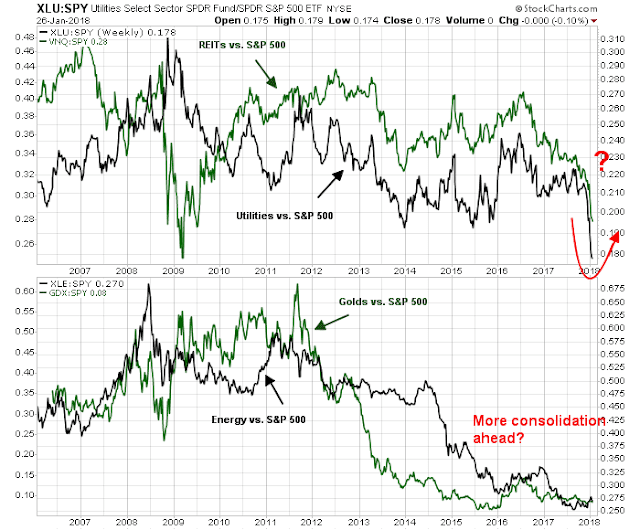 If commodity sensitive stocks were to underperform, another crowded trade that is likely to reverse is USD weakness. The latest Commitment of Traders report shows that large speculators are in a crowded short in the USD, and crowded long in the euro. 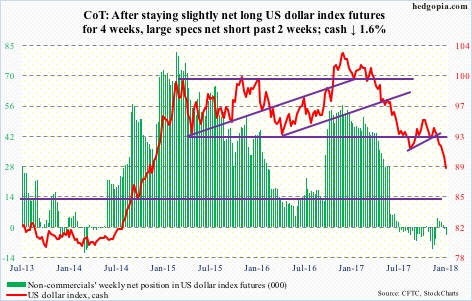 The USD Index is now testing a key long-term Fibonacci support level and a rally could occur at any time.

Tactically, interest sensitive vehicles are not showing signs of a bottom yet. While investors could take a partial position now, traders may wish to either wait for a test of support, or an upside breakout of the downtrend line before making large commitments. The long Treasury bond ETF (TLT) is one example of this technical pattern.

REITs are also showing a similar pattern of approaching technical support while a downtrend line defines a possible bullish breakout.

Utilities have a less well define downtrend, but the technical pattern is roughly the same.

Looking to the week ahead, the environment continues to be dominated by the FOMO stampede to buy stocks. As a possible sign of capitulation, Jason Goepfert at SentimenTrader threw up his hands Friday morning. Historical studies of sentiment, breadth, and overbought/oversold indicators don’t seem to matter anymore. 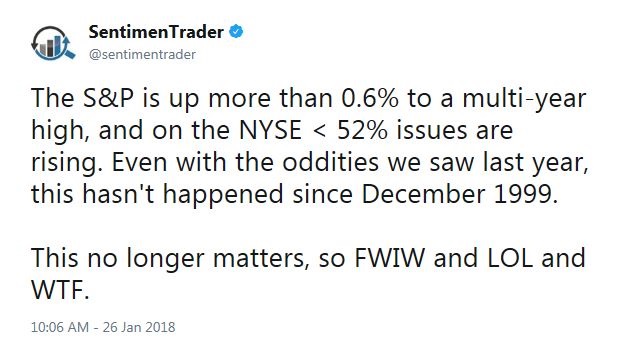 Still there are some signs that market internals are starting to weaken. Risk appetite indicators, as measured by price momentum and high beta/low volatility performance, are weakening. If the rally is based on rising risk appetite and price momentum, negative divergences in these indicators are warning flags for traders. Moreover, the latest SPX rally has been well defined by a rising channel, and the market closed Friday at the top of the channel. At a minimum, it is likely to pull back or consolidate next week even the advance were to continue. 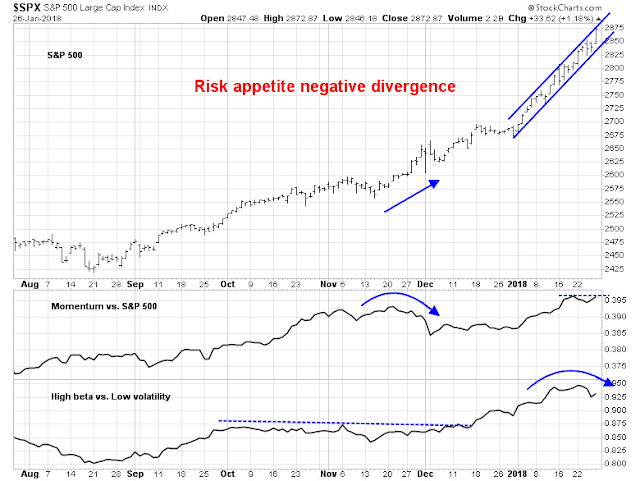 Schaeffer’s Research also highlighted the weak performance of the DJ Transports. The Dow has not performed well after such episodes. 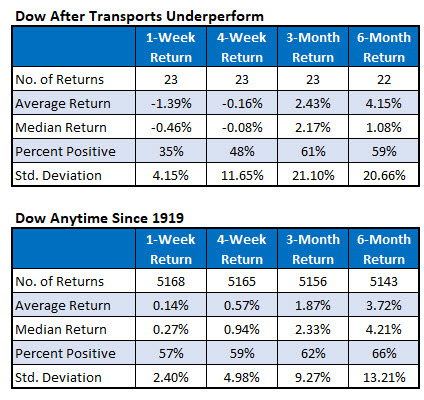 For what it’s worth, Tom McClellan found an unusual relationship between Bitcoin prices and the DJIA, where BTC leads DJIA by eight weeks. If his analog is correct, then expect stock prices to top out the week of February 8, 2018.

That timeframe is consistent with the latest Q4 earnings season update from FactSet. Bottom-up consensus forward 12-month EPS estimates continue to scream upwards, and bottom-up 2018 EPS estimates are up 3.8% since the passage of the tax cuts. While company analysts have hesitated to raise their estimates until they knew the precise details of the tax bill and the specific effects on their companies, top-down strategists have not been so shy and they have penciled in a 6-9% increase in 2018 EPS. At the current rate of revisions, tax-related upward estimate revisions should level out in about two weeks, or the week of February 8. 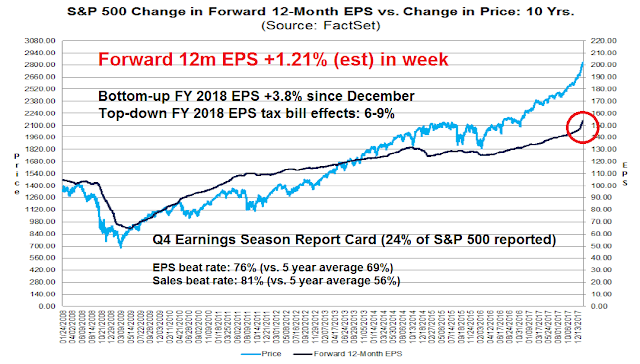 To be sure, estimate revisions may continue to rise after the tax bill effects wear off as positive revisions are based on a combination of favorable tax treatment and the positive cyclical effects of higher growth expectations. Q4 earning season has seen above EPS beat rates, an off-the-charts sales beat rate, and an extremely positive guidance rates for Q1. 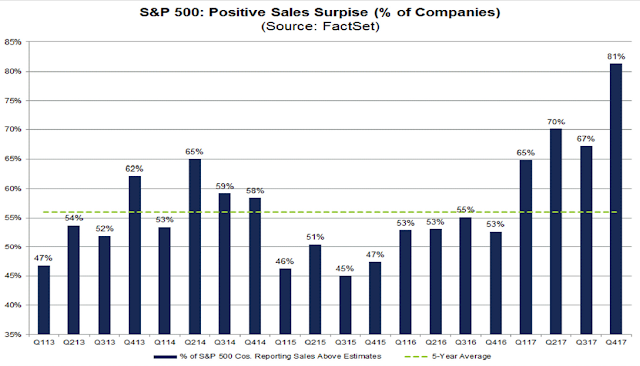 It will be an open question whether faltering top-down growth expectations can overwhelm positive bottom-up guidance. Next week will could see some event-based volatility. We can look forward to the State of the Union address (Tuesday night), Janet Yellen’s final FOMC meeting as Fed chair (Tuesday and Wednesday), and the January Jobs Report (Friday). Q4 earnings season is also continuing and there will undoubtedly be stock specific surprises. Watch for earnings reports from momentum favorites Amazon (AMZN), Apple (AAPL), Boeing (BA), Facebook (FB), Alphabet (GOOGL), and VISA (V) for sources of volatility. 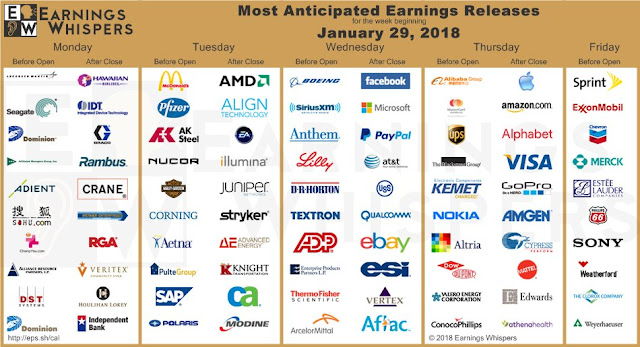 My inner investor remains equity bullish and he is enjoying this melt-up. My inner trader took a small short position last week. He is nervously waiting to see if risk appetite will break downwards. Farrell’s Rule #4 suggests that any breakdown will be a doozy.

7 thoughts on “The pain trade signal from the bond market”