As we wait for Donald Trump’s first State of the Union address, investors are left to wonder which Trump will show up before Congress on Tuesday. Will it be Teleprompter Trump, whose well-crafted speech will be interpreted favorably by the markets, or Twitter Trump, whose utterances will spook the markets? 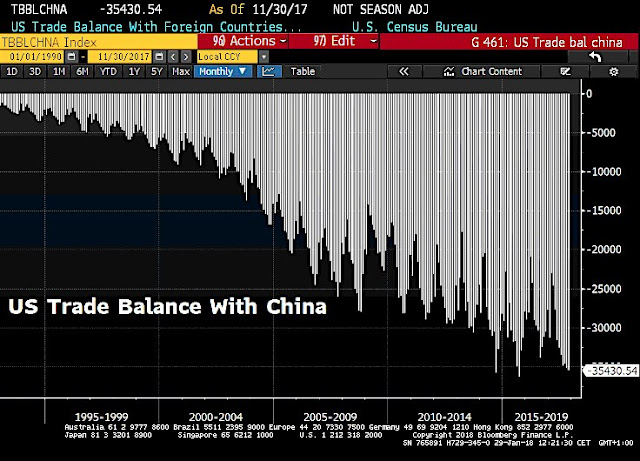 Trump will undoubtedly make comments about trade policy, which was a centerpiece of his campaign (see Sleepwalking toward a possible trade war). Former Morgan Stanley Asia chairman Stephen Roach recently penned a Project Syndicate essay entitled “How to Lose a Trade War”, where he complained about the misguided policies behind recent imposition of tariffs on solar panels and washing machines:

For starters, tariffs on solar panels and washing machines are hopelessly out of step with transformative shifts in the global supply chains of both industries. Solar panel production has long been moving from China to places like Malaysia, South Korea, and Vietnam, which now collectively account for about two-thirds of America’s total solar imports. And Samsung, a leading foreign supplier of washing machines, has recently opened a new appliance factory in South Carolina.

The problem goes beyond “unfair trading practices”, according to Roach. The deeper problem stems from the propensity of Americans to spend and their lack of willingness to save. This creates a current account deficit, which manifests itself in large imports of foreign goods. In other words, as long as Americans keep on spending and don’t save, the trade deficit will migrate to other countries if the US imposes tariffs on China.

The Trump administration’s narrow fixation on an outsize bilateral trade imbalance with China continues to miss the far broader macroeconomic forces that have spawned a US multilateral trade deficit with 101 countries. Lacking in domestic saving and wanting to consume and grow, America must import surplus saving from abroad and run massive current-account and trade deficits to attract the foreign capital.

Consequently, going after China, or any other country, without addressing the root cause of low saving is like squeezing one end of a water balloon: the water simply sloshes to the other end. With US budget deficits likely to widen by at least $1 trillion over the next ten years, owing to the recent tax cuts, pressures on domestic saving will only intensify. In this context, protectionist policies pose a serious threat to America’s already-daunting external funding requirements – putting pressure on US interest rates, the dollar’s exchange rate, or both.

Roach believes that the way to address unfair trading practices is through the mechanisms set out by the WTO.

That doesn’t mean US policymakers should shy away from addressing unfair trading practices. The dispute-resolution mechanism of the World Trade Organization was designed with precisely that aim in mind, and it has worked quite effectively to America’s advantage over the years. Since the WTO’s inception in 1995, the US has filed 123 of the 537 disputes that have been brought before the body – including 21 lodged against China. While WTO adjudication takes time and effort, more often than not the rulings have favored the US.

If the WTO is the first place to address trade issues, then the recent US Representative’s 2017 Report to Congress on China’s WTO Compliance is eye opening. The first 25 pages is a spells out China’s transgressions to which the US believes it has valid grievances.

Under the section “Next Steps”, the report states:

The United States is determined to use every tool available to address harmful Chinese policies and practices, regardless of whether they are directly disciplined by WTO rules or the additional commitments that China made in its Protocol of Accession to the WTO. The United States will not accept any Chinese policies or practices that are unfair, discriminatory or mercantilist and harm U.S. manufacturers, farmers, services suppliers, innovators, workers or consumers. Americans have waited long enough. The time has come for China to stop its market-distorting policies and practices and finally become a responsible member of the WTO.

In other words, the term “every tool available” is code for a trade war. The markets won’t like that at all. 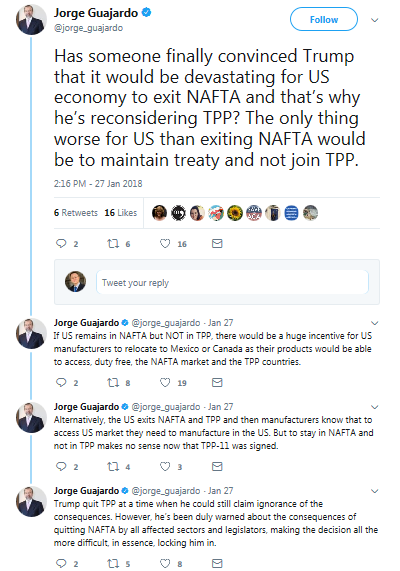 If the US remains in NAFTA but stays out of the Trans Pacific Partnership (TPP), it creates incentives for companies to locate facilities in either Canada or Mexico in order to benefit from both NAFTA and TPP. If the US leaves NAFTA, then continental trade will tank, and destroy supply chains that were built up over decades. 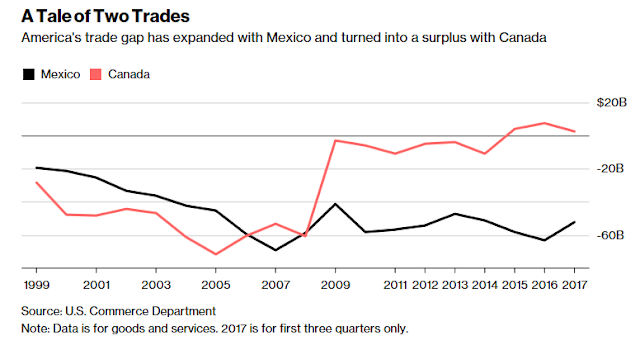 In that case, nobody wins.