Don’t relax yet, the week isn’t over – Humble Student of the Markets

Mid-week market update: Boy, was I wrong. Two weeks ago, I wrote Why the S&P 500 won’t get to 2400 (in this rally). Despite today’s market strength, stock prices may be restrained by a case of round number-itis as the Dow crosses the 21,000 mark and the SPX tests the 2,400 level.

In addition, the market’s reaction to President Trump’s speech to Congress was at odds to the reaction from Street strategists. While the market went full risk-on in the wake of the Trump speech, this Bloomberg summary of strategist comments made it clear that the speech was long on themes and short on details. Perhaps stocks are rallying because Trump did not go off script and sounded statesmanlike and presidential. How long the market remains patient with his lack of the specifics on tax reform, which is Wall Street’s major focus, remains an open question.

In the meantime, the SPX has broken above its trend line and appears to be staging an upside blow-off. When animal spirits start to stampede like this, you never know when the rally will end. 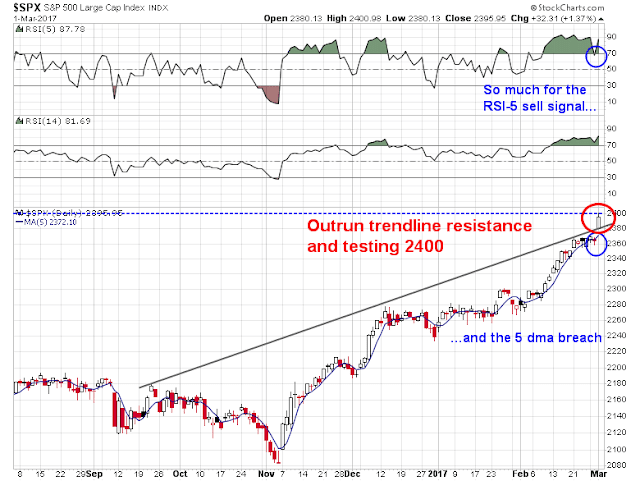 Does this mean it’s time to jump back on the bullish bandwagon? Not so fast. The week isn’t over and there are a couple of other major developments (other than the Trump speech) that warrant consideration.

The state of the (European) union 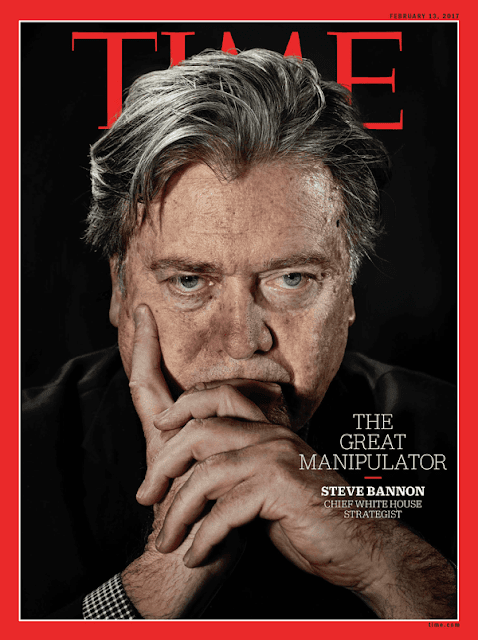 The populist Geert Wilders is losing ground in the upcoming Dutch election on March 15. Bloomberg reports that Wilders’ Freedom Party is running neck and neck with the establishment Liberals, which forms the current government:

Dutch Prime Minister Mark Rutte’s Liberals are making up ground on populist frontrunner Geert Wilders in the polls, suggesting that voter support is crystallizing in the final weeks of the campaign in favor of keeping Rutte in power.

Two polls released on Tuesday showed the Freedom Party with a one-seat advantage or even with the Liberals. That’s down from a lead of as many as 12 seats at the start of the year. A poll aggregator released Wednesday showed the Liberals narrowly ahead for the first time since November.

Business Insider also reported that Wilders has slipped to second place in one recent poll.

In France, conservative presidential candidate François Fillon’s political fortunes are imploding, based on the news that investigating magistrates have summoned him and his wife on charges that he put his wife on a government payroll for nonexistent work. In a press conference, Fillon decried the move as “political assassination” and vowed to fight on. This development has cleared a path for the centrist Emmanuel Macron to the French presidency. The latest Betfair odds shows Macron surging at Fillon’s expense. The anti-establishment and populist Marine Le Pen remains in second place, with little hope of winning the election. 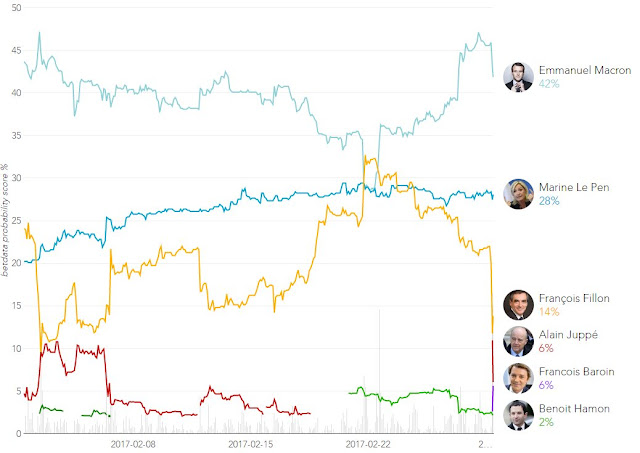 As a consequence, the French-German yield spread has begun to narrow. 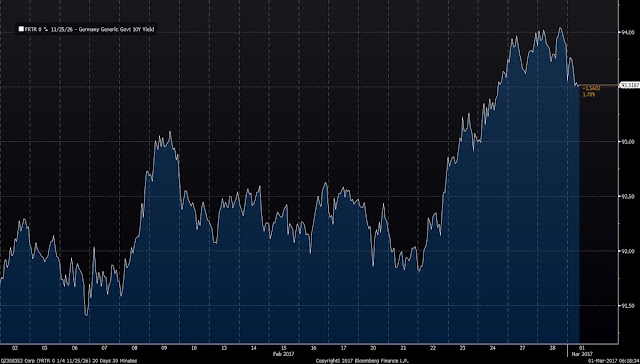 The state of the European Union is getting stronger.

In a Bloomberg interview on February 21, Cleveland Fed president Loretta Mester stated that the Fed does not like to surprise the market on interest rate decisions. At the time of that interview, the odds of a March rate hike was in the 20-30% range. It is now about 70% after one Fed speaker after another warned that not only is the March FOMC meeting “live”, there is a distinct possibility that they may raise rates at that meeting. San Francisco Fed president John Williams said that he expect that the FOMC will a rate hike will warrant “serious consideration” at the March meeting. In a CNN interview, New York Fed president William Dudley said that the Fed will raise rates “fairly soon”.

What does this all mean?

Fed watcher Tim Duy thinks that the question is whether the Fed wants to be preemptive, or it wants to wait to see how fiscal policy develops:

When I read the interview, it is hard for me to see that he has a strong conviction for drawing forward the rate hike to March. It seems odd to do so if he sees no change in the forecast and downplays the impact of the upside risks. If he does want to move in March, it tells me then it has little to do with either factor and is entirely about staying ahead of the curve. It is about the need for a preemptive rate hike. If his forecast is for three hikes and he wants to hike in March, then his patience has ended and he wants those hikes frontloaded. If for FOMC participants as a whole the forecast has yet to change much, then it is possible that the even if they raise in March, the median projection of three rate hikes this year remains steady.

Much of the data has been coming on the “hot” side, indicating a robust economy with rising inflationary pressures. By the book, the Fed should be thinking seriously about starting a rate hike cycle about now. Indeed, there were several data points that were released today that are supportive of that view.

The Beige Book, which released today, showed a lot of “modest to moderate” growth. Labor markets are tight, with “moderate” employment growth. Some districts reported labor shortages. These are the kinds of conditions that Dudley referred to when he described an “economy continues on the trajectory that it’s on, slightly above-trend growth, gradually rising inflation” as the prerequisites to the removal of monetary policy accommodation.

This morning also saw the release of the ISM Manufacturing Survey, which rose and came in ahead of expectations, as it continued a trend of beating market expectations. 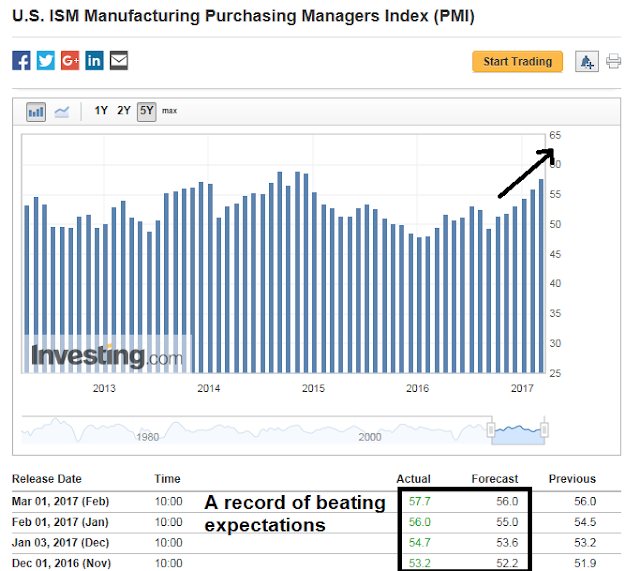 As well, month-over-month Core PCE, the Fed’s preferred inflation metric, was released this morning. It also came in ahead of expectations and surged to an annualized rate of 3.8%, well ahead of the Fed’s 2% inflation target. 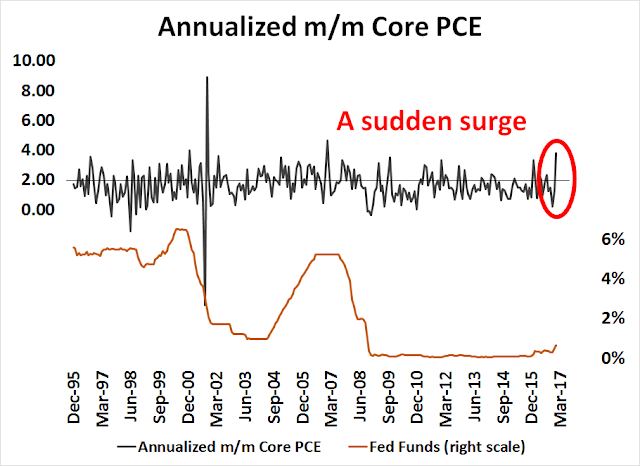 To put this data point into context, I counted the times in the last 12 months that annualized m/m Core PCE has exceeded 2%. As the chart below shows, the Fed has historically begun a rate hike cycle whenever the count reached six (dotted line). The count currently stands at five, which begs the question, “How preemptive does the Fed want to be?” 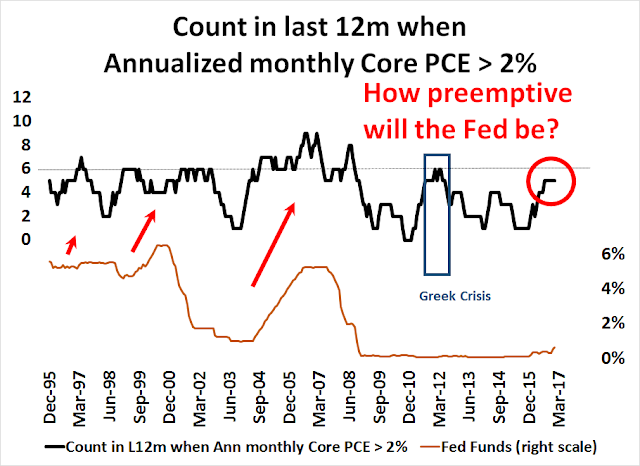 Fed chair Janet Yellen and vice chair Stan Fischer are scheduled to speak on Friday. If they want to give the market further direction, we should get it then. In addition, Fed governor Lael Brainard is scheduled to speak a 6pm ET today (Wednesday). Brainard is one of the most dovish governors on the Board, if her tone sounds hawkish, then watch out!

In summary, the stock market is undergoing a blow-off with no end in sight. We are starting to see bullish political developments out of Europe, but one wildcard is the possibility of a March rate hike. Should the Fed preemptively raise rates, not only would the normal macro effects of slowing the American economy be applicable, it would push up the US Dollar. A rising USD would be bearish in three ways. First, a strong greenback squeezes the margins and therefore the earnings of large cap multi-nationals companies. It would be supportive of the “America First” contingent within the Trump administration in their protectionist policies. As well, a strong USD would pressure the emerging market countries and companies with USD debt and raise the odds of an EM debt crisis.

My inner trader initiated a small SPX position on Tuesday. He is maintaining his position in view of the downside risks to the market.

7 thoughts on “Don’t relax yet, the week isn’t over”