Mid-week market update: As the major market averages make new all-time highs, I conducted an informal and unscientific Twitter poll. I was surprised to see how bullish respondents were.

Let’s just cut to the chase – forget it. Neither the fundamental nor the technical backdrop is ready for an advance of that magnitude. Even though the earnings and sales beat rates for Q4 earnings season is roughly in line with historical averages, Factset reports that the 12-month forward EPS growth is stalling. Past episodes has seen stock price struggle to make significant advances under such conditions. 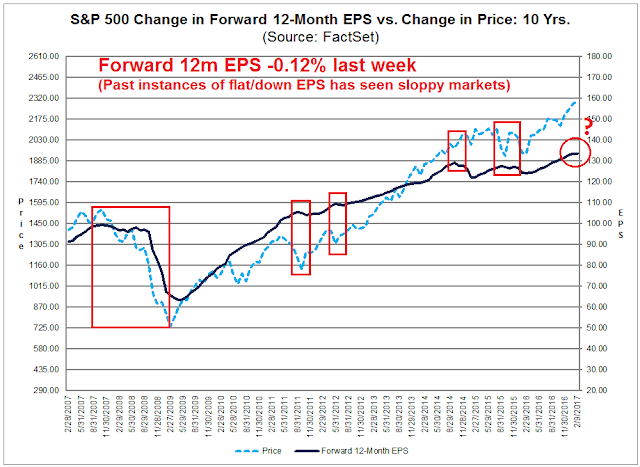 In addition, the technical condition of the market shows that it is vulnerable to a pullback.

This rally has raised a number of red flags. Schaeffer’s Research pointed out that the advance has been accomplished on deteriorating breadth, as measured by 52-week new highs. 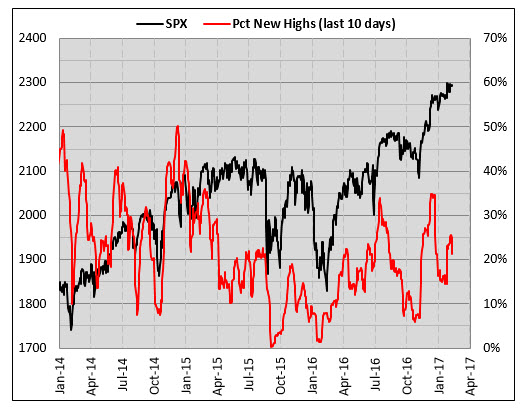 If history is any guide, expect subpar returns pattern for the next couple of weeks. 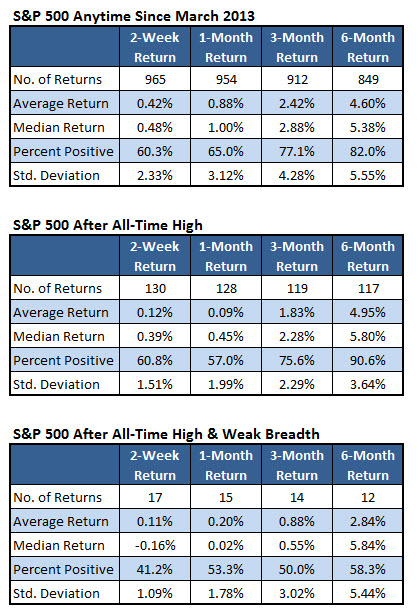 Independent of the analysis from Schaeffer`s, this chart from Trade Followers shows that bullish Twitter breadth is also not advancing even as the market made new highs, indicating a different form of negative breadth divergence. 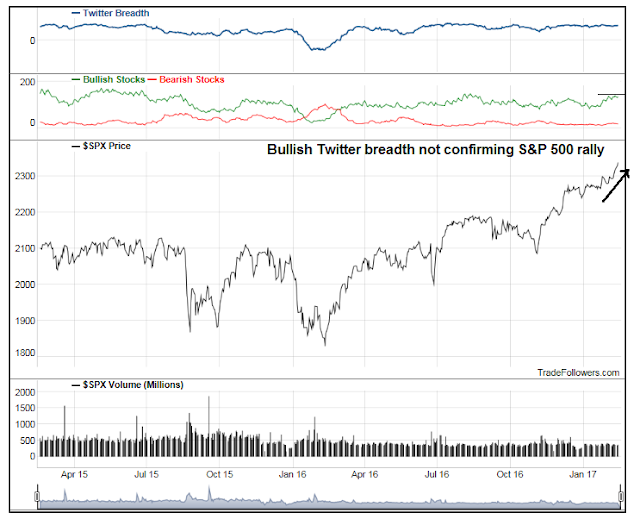 In addition, there are numerous instances of excessively bullish sentiment, which is contrarian bearish. The CNN Money Fear and Greed Index is at a level where stock prices have shown difficulty rising in the past. 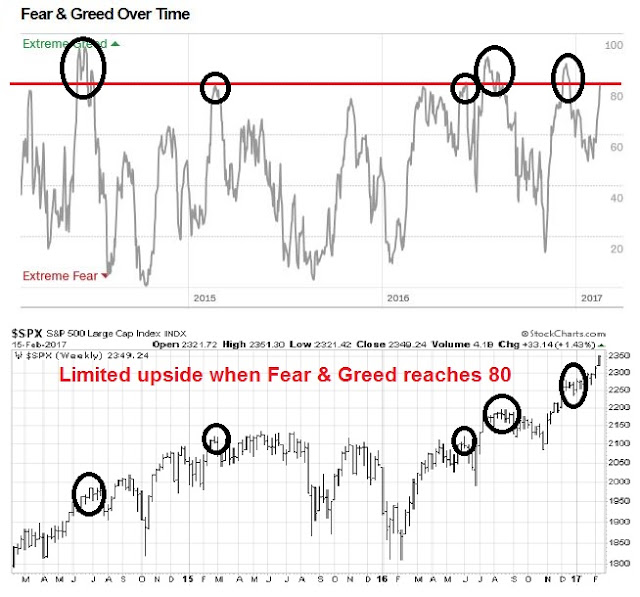 The CBOE put/call ratio has fallen to levels that can only be described as giddy. Urban Carmel observed that short-term returns tend to be negative after such readings. 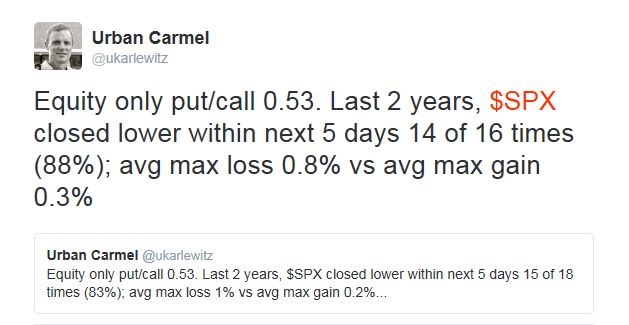 The option market is flashing other anomalous signals. Even as stocks rose today, both the VIX Index rose and the VIX term structure, as measured by the VIX/VXV ratio, flattened. Such behavior by the VIX are normally signs of rising caution. I did a study that went back to November 2007, when data for the VXV was first available. I found 117 non-overlapping similar instances. As the table below shows, historical returns were disappointing for the following week. 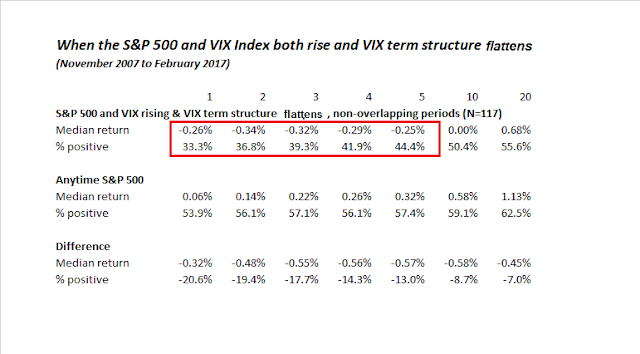 As stock prices have risen, it is no surprise that most overbought/oversold models are showing overbought readings. Consider, for example, this chart from Index Indicators of the 5-day RSI above 70, which is a short-term (1-2 day) trading model 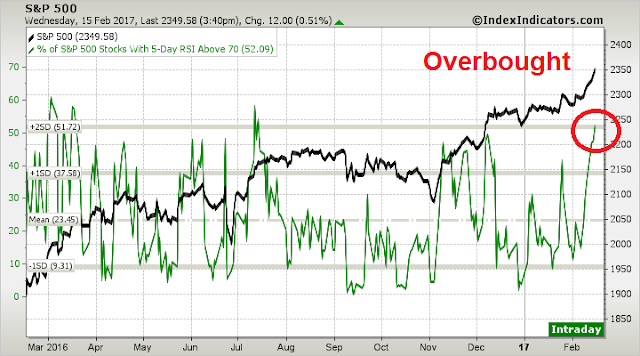 This chart of net stocks at 20 day highs-lows, which is a model with a longer term (1-2 week) time horizon, is also in overbought territory. 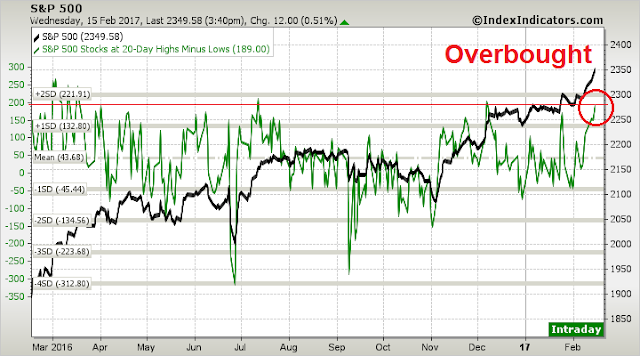 Overbought readings like those are to be expected as the market advances. There is nothing that says overbought markets can’t stay overbought. However, an alert reading sent me the following chart, which showed that the NASDAQ 100 is reaching overbought levels not seen since 1999, which was the top of the Tech Bubble. 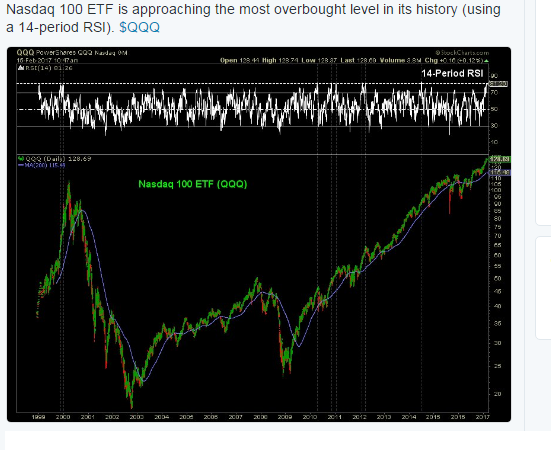 Don’t get too bearish

Despite the combination of overbought and excessively bullish sentiment readings, my inner trader is not wildly bearish. Anecdotal evidence from independent sources of discussions with investment managers indicate that there is a lot of nervousness beneath the surface. This suggests to me that while stock prices may pull back in the near-term, any correction is likely to be shallow and should be bought.

Be cautious, but don’t go overboard on your short positions. My inner trader remains in cash and he is inclined to stay on the sidelines, for now.