Cry Havoc, and slip loose the dogs of (trade) war! – Humble Student of the Markets

The WSJ reported that the Trump administration is considering a new tactic in managing its trade relationship with China. Here is the Bloomberg recap for those without a WSJ subscription:

Under the plan, the commerce secretary would designate the practice of currency manipulation as an unfair subsidy when employed by any country, instead of singling out China, the newspaper reported. American companies could then bring anti-subsidy actions to the U.S. Commerce Department against China or other countries, it said.

The discussions are part of a strategy being pursued by the White House’s new National Trade Council to balance the goals of challenging China on certain policies while keeping broader relations on an even keel, the paper said. The Trump administration would avoid, at least for now, making claims about whether China is manipulating its currency, it said.

While such an approach may seem clever, it has the risk of sideswiping American relations with a whole host of other countries other than China. As well, the imposition of countervailing duties is subject to a challenge under WTO rules.

One of the key questions is how you define an undervalued currency. There are many metrics, but consider the popular Big Mac Index, as compiled by The Economist.

If the idea of this initiative is to target China, then there are many other countries with undervalued currencies that will have to be targeted under this initiative. Starting from the bottom, the list includes the following countries before we get to China: Egypt, Ukraine, Malaysia, South Africa, Russia, Taiwan, Mexico, Poland, Indonesia, Sri Lanka, Hong Kong, India, Vietnam, the Philippines, and Turkey. A blanket rule that imposes countervailing duties on the exports from this list risks destabilizing a number of important geopolitical relationships, and it would signal the start of a global trade war. 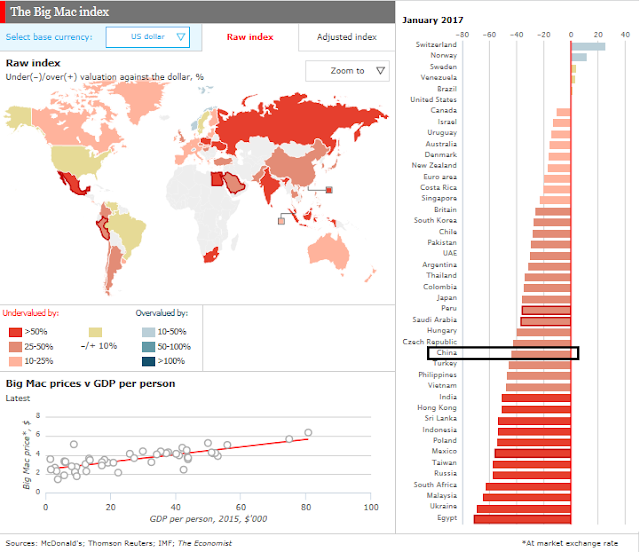 To be sure, the Big Mac Index has a number of flaws and it is not the only measure of purchasing power parity (PPP). Bloomberg reported that Nomura compiled an iPhone index because the price of Big Macs in poor countries can be distorted by low labor costs.

For years, many traders have used the Big Mac index — which is based on the price of a McDonald’s Corp. hamburger — along with an OECD gauge and measures based on consumer and producer prices, to determine currencies’ relative value. All of these show the dollar as broadly overvalued.

The iPhone index is better than its traditional peers because it uses the “defining product of the digital era,” Hafeez said. “IPhone is high-end tech,” he said. “That’s going to be the bigger driver in the future.”

Nomura found a number of notable differences between iPhone and Big Mac prices (data as of July 2016). 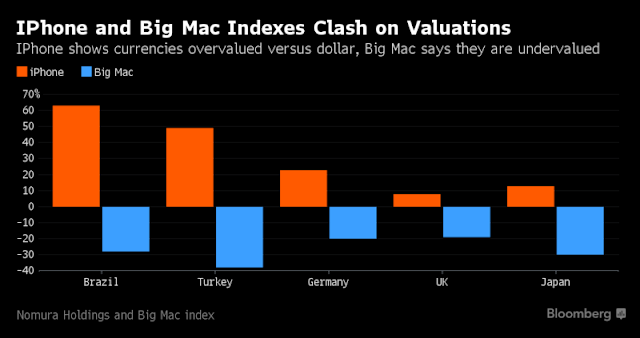 In response to these criticisms, The Economist unveiled the Big Mac Adjusted Index, which adjusts for labor costs in each country. Suddenly, China`s currency doesn’t look that undervalued anymore. On the other hand, a whole host of other countries would get targeted using this methodology: Egypt, Hong Kong, Malaysia, Taiwan, South Africa, Russia, Poland, and Mexico. While having Mexico on both the unadjusted and adjusted lists may serve the Trump administrations political aims, what about the other countries? 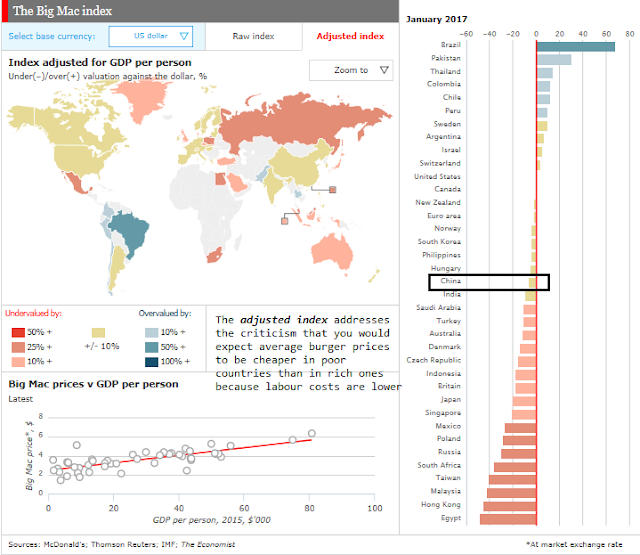 I recognize that the “currency manipulation as unfair subsidy” represents a trial balloon by the Trump administration as a way of fulfilling its campaign promise of addressing the damage from “unfair trade”. The fact that the White House is even thinking about such broad based solutions are raising the risks of a global trade war.

Now when you look at Trump the Entrepreneur through this prism, it explains not just his behavior on the campaign trail and in using Twitter, it also explains his “grab them by the pussy” mode of operating. I think it also explains how Trump the entrepreneur saddled four different businesses with so much debt that they were forced into bankruptcy. in short, Donald Trump is a man of action, who often leaps before he looks. That can mean unexpected success. But it means he is prone to getting things very wrong, and then having to improvise to clean up the mess.

This isn’t how traditional politicians operate, by the way. First of all, most politicians are frightened to death by uncertainty and assiduously avoid it to prevent tail risk. If you think about it from a decision tree perspective, a politician that has a choice between guaranteed but moderately bad outcomes and uncertain but potentially catastrophically bad outcomes is going to feel a lot of loss aversion pressure. Even a supposed maverick like Greek Premier Alexis Tsipras caved in 2015 – and went with a bad outcome to prevent a catastrophic outcome when the ECB threw down the gauntlet and threatened to collapse the Greek banking system.

But Trump is not that kind of guy. His overarching strategy is just the opposite – create uncertainty, be as unpredictable as possible and hopefully profit from this. He has even said this himself – multiple times.

By floating this trial balloon, the Trump administration has in effect let “slip the dogs of (trade) war”. Once you accept the principle of imposing countervailing duties on currency manipulation, why not border adjust for other reasons? FT Alphaville outlined a number of other proposals that have been floated, such as a carbon tax border adjustment:

So it’s interesting to read a proposal from Republican eminences arguing the government should tax carbon dioxide emissions, including from imported goods, and rebate the revenues to the public:

Border adjustments for the carbon content of both imports and exports would protect American competitiveness and punish free-riding by other nations, encouraging them to adopt carbon pricing of their own. Exports to countries without comparable carbon pricing systems would receive rebates for carbon taxes paid, while imports from such countries would face fees on the carbon content of their products.

How about labor standards in the name of “fair trade”?

If “border adjustment” is appropriate for discouraging pollution, why shouldn’t it also be used to uphold labour standards? What’s the point of having minimum wages, protections for collective bargaining, and occupational safety requirements if the jobs are just going to be offshored to countries — often less-than-democratic ones — with different priorities?

Indeed, slip loose the dogs of trade war. The kennel door is opening, and that would be very, very bearish for the global economy.

6 thoughts on “Cry Havoc, and slip loose the dogs of (trade) war!”