The chart below depicts the yield curve, as measured by spread between the 10-year and 2-year Treasury yields, (blue line) and equity returns (grey line). The yield curve has been an uncanny recession forecaster. It has inverted ahead of every single recession, and warned of major equity bear markets. 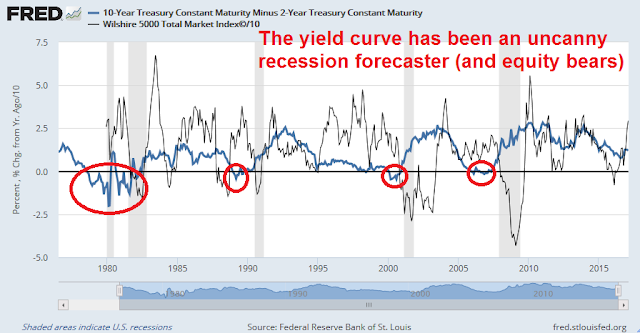 Unfortunately, this indicator may not work this time.

Fed watcher Tim Duy recently expressed some doubts as to the Fed’s policy of separating the process of rate normalization and the normalization of its balance sheet “because it risks financial destabilization by flattening the yield curve”:

Having tipped their toes in the water with two interest-rate hikes — and more expected to come — the Federal Reserve officials have begun the discussion about reducing the size of the central bank’s $4.45 trillion balance sheet. To date, they have tended to look at interest rate-policy as separate from balance-sheet policy. Once the former is heading toward normalization, then they can begin the latter.

I tend to be skeptical of that strategy, largely because it risks financial destabilization by flattening the yield curve, or the difference between short- and long-term bond rates. I would prefer an explicit policy strategy that incorporates both interest-rate and balance-sheet tools acting jointly not with the goal of “normalizing” either of those components, but aimed at meeting the Fed’s dual mandates of full employment and stable prices. Under such a framework, for example, the Fed wouldn’t need to follow through with additional rate hikes before to balance-sheet reduction. There would be no preconceived notion of the “correct” order of operations.

If the Fed’s QE programs distorted the shape of the yield curve by intervening in the bond market, then the process of separating the process of rate normalization and balance sheet normalization will also create another distortion. Duy prefers the approach favored by St. Louis Fed president Bullard:

Bullard still sees the balance sheet as a mechanism to normalize policy even if policy rates remain low. The problem with the current policy stance is that the Fed is flattening the yield curve by raising expectations of higher short-term rates while a large balance sheet places downward pressure on long rates. Bullard doesn’t see a theoretical justification for maintaining this twist operation as the Fed responses to changing economic conditions.

As Janet Yellen faces Congress this week, she will likely face questions about her approach to the Fed’s balance sheet. This will be an important policy issue as it has wound down QE and begun raising interest rates.

The Fed vs. Trump

In addition, I pointed out in my last post that how pivots in monetary policy by new Trump appointees have the potential to send shock waves through the economy and the markets (see A blow-off top, or a wimpy top?). 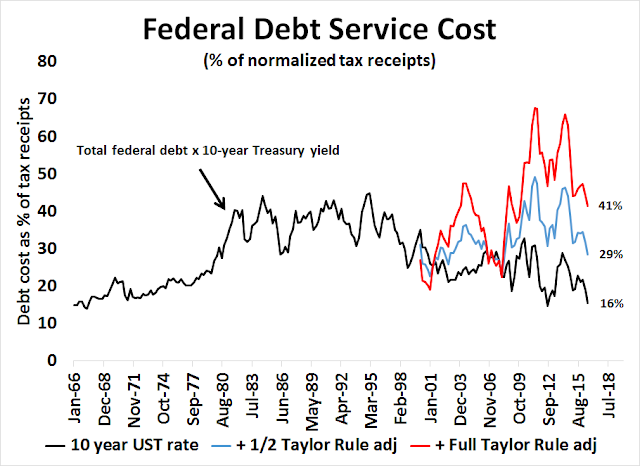 Fed officials are just preparing for a possible battle over the future direction of Fed policy. Vice chair Stanley Fischer* pushed back against the idea of using a mechanical rule to set interest rates in a speech on February 11, 2017. In that speech, Fischer used the FOMC August 2011 decision as case study:

And what do I take from this episode? The interest rate decision taken in August 2011 was unusual in that a decision was made about the likely path of future interest rates. Most often, the FOMC is deciding what interest rate to set at its current meeting. Either way, in reaching its decision, the Committee will examine the prescriptions of different monetary rules and the implications of different model simulations. But it should never decide what to do until it has carefully discussed the economic logic that underlies its decision. A monetary rule, or a model simulation, or both, will likely be part of the economic case supporting a monetary policy decision, but they are rarely the full justification for the decision. Sometimes a monetary policy committee will make a decision that is not consistent with the prescriptions of standard monetary rules–and that may well be the right decision. Further, in modern times, the policy statement of the monetary policy committee will seek to explain why the committee is making the decision it is announcing. The quality of those explanations is a critical part of the policy process, for good decisions and good explanations of those decisions help build the credibility of the central bank–and a credible central bank is a more effective central bank.

The next few months could be an important turning point for the Fed. Watch this space!

* Fischer can be regarded as a highly respected and grizzled veteran of central banking. He was on the thesis committee for both Ben Bernanke and Mario Draghi. IMHO, he was a leading candidate for Fed chair ahead of Yellen, but he could not be appointed because his former position as the head of the Israeli central bank. Instead, he was invited to become vice chair to act as a congliere to Yellen.