Watch what they do, not just what they say – Humble Student of the Markets 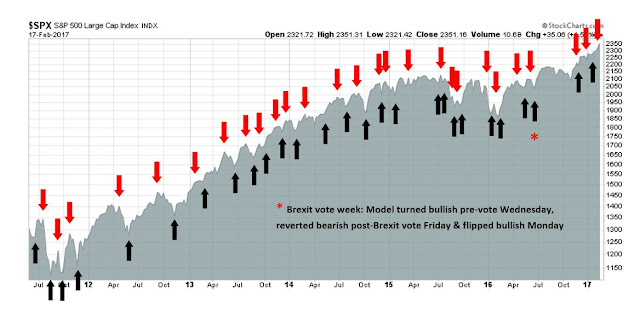 Bloomberg recently highlighted the huge gap between expectations and reality. As the chart below shows, soft (expectations) data has been surging, but hard (actual) data has risen, but it has not caught up with expectations. 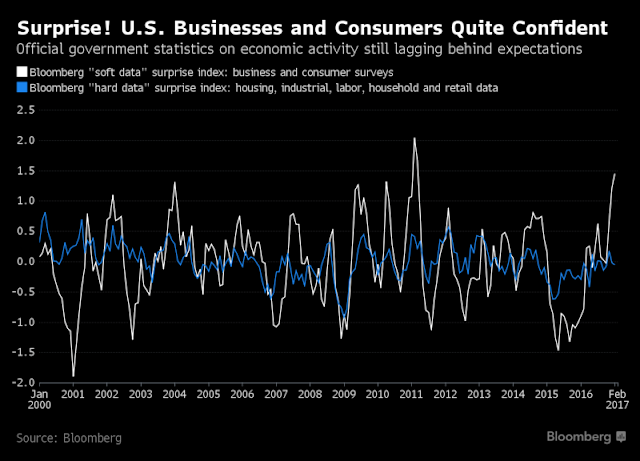 The markets are pricing for perfection, which sets up a situation where minor disappointments could spark a market sell-off. BCA Research found that such divergences between “soft” expectations data and “hard” economic data has seen equity corrections in the past.

This week, I examine the details of how expectations have diverged from actual data on a number of dimensions. 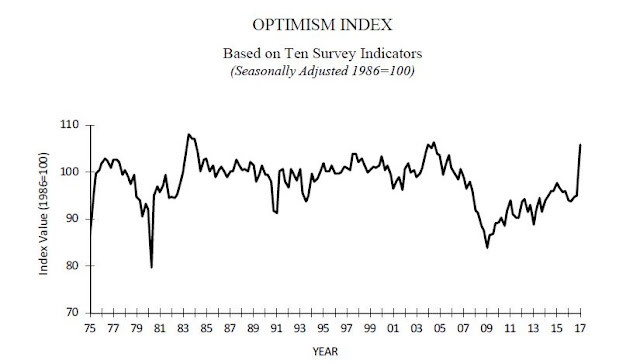 However, the outpouring of optimism has not been matched by actual sales results. Even though sales ticked up last month, their rise lagged expectations. Since 1974, there have been five other episodes where expectations have surged. In two of those cases, sales rose to match expectations; in two others, they did not; and in 2009-10, sales saw eventually rose, but the surge was delayed by about a year (chart annotations are mine). 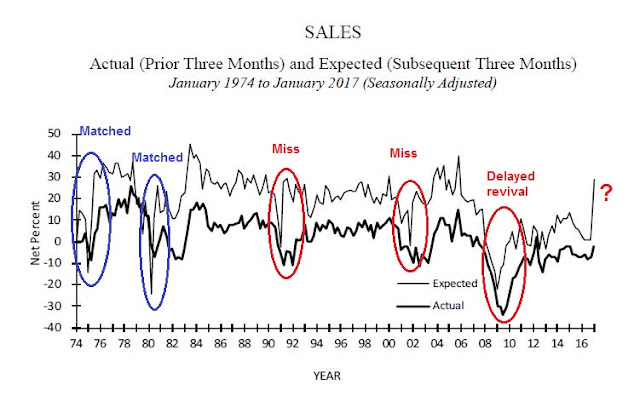 Small business capital expenditure plans have been relatively muted despite the surge in small business optimism. 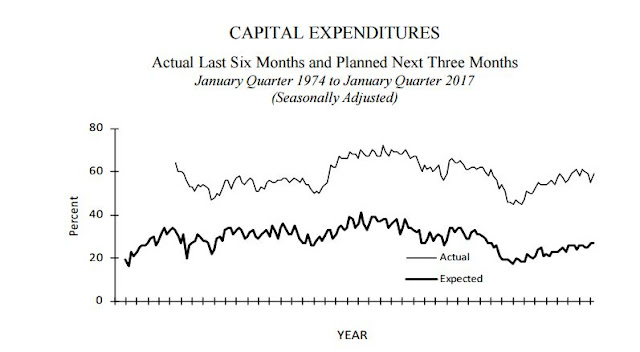 One reason for the cautiousness could be attributable to rising labor costs. While labor costs have risen, business owners have not been able to raise prices to pass through higher compensation rates, which results in a margin squeeze. 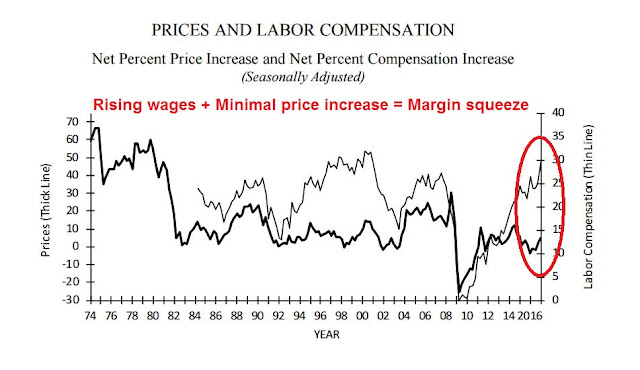 I am keeping an open mind as to whether small business optimism will translate into more hiring and capital expenditures. But watch what small business owners do, not just what they say.

It’s not just the mood of small business owners that has become more upbeat. A simple word count of the word “optimistic” in earnings calls has surged to all-time highs. 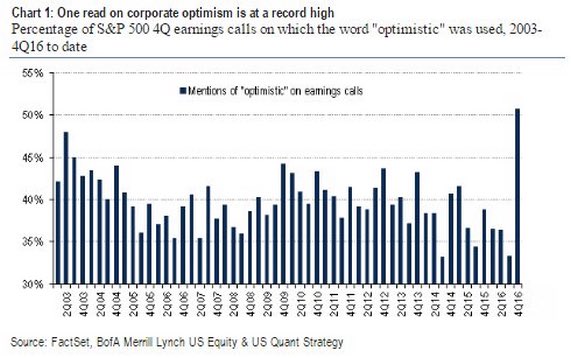 But if management is so optimistic, then why have insiders been selling so much of their company’s shares (via Barron’s)?

Watch what corporate insiders do, not just what they say.

Can the consumer MAGA?

If Donald Trump is to Make America Great Again, then one of the key ingredients is strength in consumer spending. As the chart below shows, the US economy is seeing a divergence between rising consumer confidence (black line) and real wage growth (blue line). How can the consumer spend when real wages are stagnant? More worrisome is the observation that falling real wages have been precursors to recessions in the past, not booms. 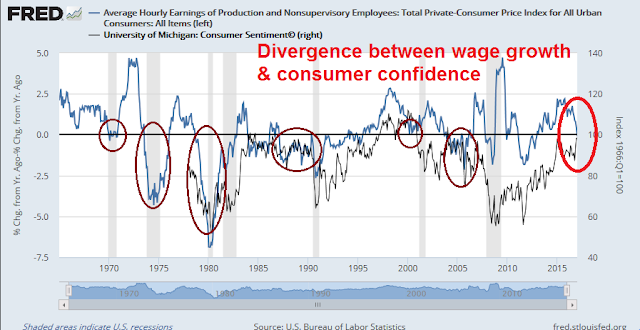 Even though January retail sales rose and beat expectations, consumer spending is likely to disappoint in the short-term. That’s because after adjusting for inflation, real retail sales actually fell from December to January. In addition, Bloomberg reported that this year’s IRS anti-fraud tax refund procedural changes are delaying the timing of refund payments. This is likely to depress current consumer spending and push it out by several months. 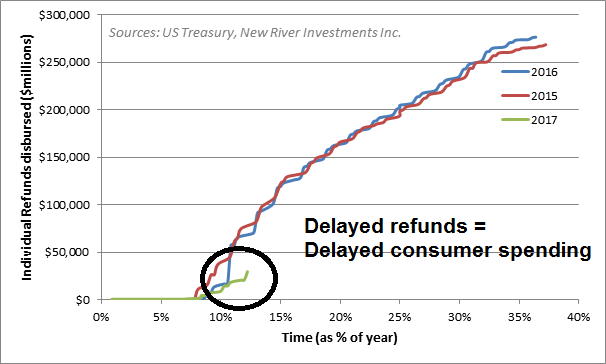 New Deal democrat is becoming concerned. He wrote about the ways consumers cope if real wages don’t grow. When the consumer runs out of coping mechanisms, the economy slides into recession:

The theory is that if real average wages are not increasing, which for a long time beginning in the 1970s they were not, average Americans use a variety of coping mechanisms. From the 1970s through the mid-1990s, spouses entered the workforce, adding to total household income. Other methods have included borrowing against appreciating assets, and refinancing as interest rates declined.

Borrowing against stock prices ended in 2000. Borrowing against home equity ended in 2006. When interest rates failed to make new lows, the consumer was tapped out, and began to curtail purchases. Thus in September 2007, with the stock market peaking, house prices falling, interest rates having not made new lows in over 3 years, and real wage growth having stalled, I wrote that a recession was about to begin: http://www.dailykos.com/story/2007/09/25/389903/-Why-American-consumers-are-signaling-recession

So far, mortgage rates have not made a new low for quite some time, so forget housing prices as an ATM to fuel consumer spending. Another way of maintaining consumer spending is to reduce savings. The savings rate is dropping, but it is not at levels that have signaled recessionary conditions in the past. As major stock indices reach all-time highs, another way of coping is by taking profits on their stock portfolios , but only a small minority of households are invested in the equity market.

So the consumer fundamentals nowcast indicates that the expansion should continue for awhile, but if inflation eats up wage gains and the savings rate this year, then all we will need for the consumer to signal a recession is for asset prices to peak. I do not think that will happen until at least next year.

Don’t panic just yet, but risks are rising. Watch what the consumers do, not just what they say.

What’s going on at the Fed? George Pearkes recently observed core PCE, the Fed’s preferred inflation metric, has been slowing. 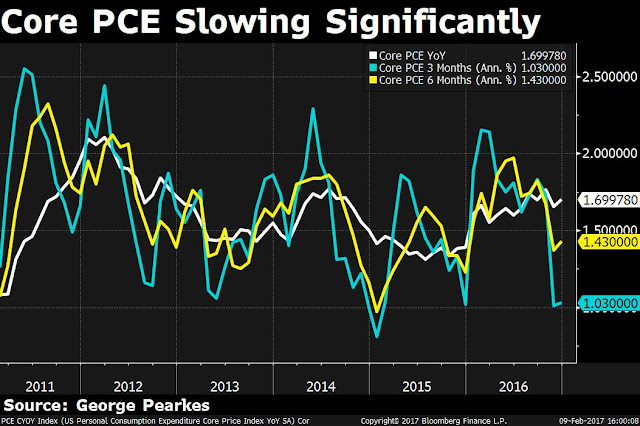 So why did Janet Yellen take on a decidedly more hawkish tone in her Congressional testimony last week? In fact, the WSJ reported that Fed officials have fanned out across the country to reinforce the message that to expect three rate hikes in 2017, which is more hawkish than the market expectations.

To be sure, the Consumer Price Index (CPI) came in a bit “hot”, or ahead of expectations, both in the headline number and core CPI. But as the chart below shows, much of the increase can be attributable to Owners’ Equivalent Rent (OER). Core sticky price CPI, ex-OER has remained below the Fed’s 2% target (note I have subtracted 2% from all CPI figures in order to better graphically show how far different inflation metrics are from the Fed’s 2% target). 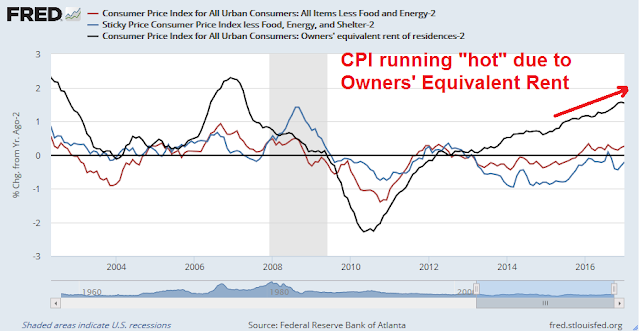 What’s going on? What is the Fed seeing that the rest of us don’t see? Is the Fed reacting in anticipation of the Trump administration’s fiscal stimulus plan? Sure that can’t be the case. Ben Bernanke recently penned a thoughtful essay about the FOMC’s decision making process. He indicated that Fed officials focus on the medium term outlook. While the effects of fiscal policy plays a part in the Fed’s deliberations, they tend to take a wait-and-see attitude to see the full details of the legislative proposals before modeling the effects.

Watch what the Fed does, not just what they say.

Over on Wall Street, they are still waiting for Trump’s “tremendous tax plan”, which will probably get unveiled in Trump’s joint address to Congress on February 28, 2017. Equity markets have rallied partly in anticipation of Candidate Trump’s tax cut and offshore tax repatriation proposals. It is not clear, however, whether any tax cuts would actually materialize this year, or what kind of bitter pill the economy would have to swallow in order for the tax cuts to get passed.

So far, it seems that the only way that Trump can pay for his proposed tax cut would be through the imposition of a border adjustment tax (BAT). Without a BAT, the Trump tax cuts could cost up to $7 trillion, according to the Tax Policy Center (via CNN Money). Bloomberg reported that the latest tax reform proposal has been stalled in Senate because a lack of Republican support:

Not long after House Speaker Paul Ryan offered a full-throated affirmation of his tax-overhaul plan, an influential conservative group announced a grassroots campaign against it and a Senate leader said a key part of the proposal is “on life support.”

Senate Majority Whip John Cornyn was diagnosing Ryan’s plan to replace the U.S. corporate income tax with a new, “border-adjusted” levy on U.S. companies’ domestic sales and imports. The proposal has stirred sharp divisions among businesses: Retailers, automakers and oil refiners that rely on imported goods and materials oppose it, while export-heavy manufacturers support it.

So far, the opponents are winning, interviews with lawmakers, lobbyists and tax specialists show. As Congress prepares to depart Washington for a one-week break, Cornyn said he didn’t see the votes lining up for the House leaders’ plan.

Even if a BAT were to pass, I highlighted analysis by Barclay’s last week (via Sam Ro) showing the net effects of a tax reform package. The sheet size of the BAT would, by necessity, be extremely protectionist and such an initiative would invite a debilitating global trade war. 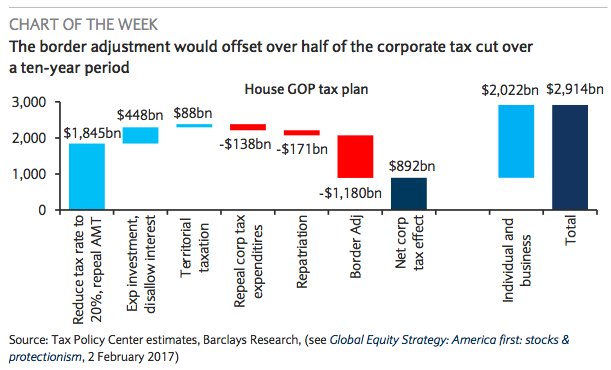 Here is what’s at stake for equity investors. John Butters from Factset pointed out that the market’s forward P/E of 17.6 is at levels last seen in 2004, a 13-year high. Investors would have to include the dot-com bubble era to make the case that the current forward P/E looks reasonable on a historical basis. In short, market expectations for tax cuts and offshore cash repatriation are extremely high and prone to disappointment. 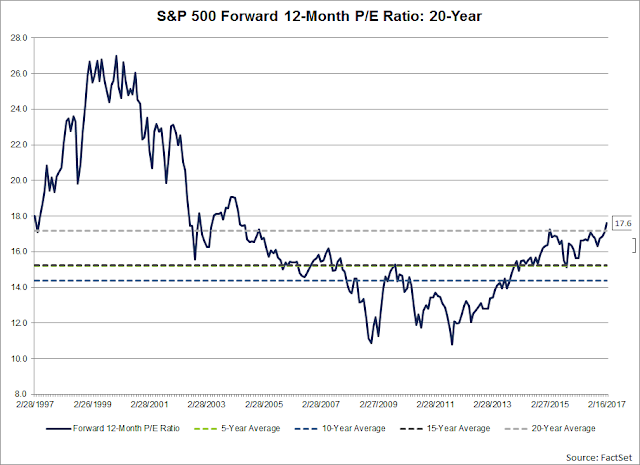 Watch what Trump administration and Congress do, not just what they say.

The week ahead: Be a patient bear

Looking to the week ahead, I don’t want to repeat what I’ve have written over the past week. The points I made in my last post (see Why the SP 500 won’t get to 2400 (in this rally)) still stands. Fundamentals still look wobbly, sentiment remains excessively bullish and short-term technical indicators are flashing overbought readings.

The latest update from Factset shows that forward 12-month EPS stopped falling and rose last week, which is a positive sign for stock prices. But the 2 and 4 weeks rates of change remain negative. In the past, stock prices have struggled whenever forward EPS has been flat to down. 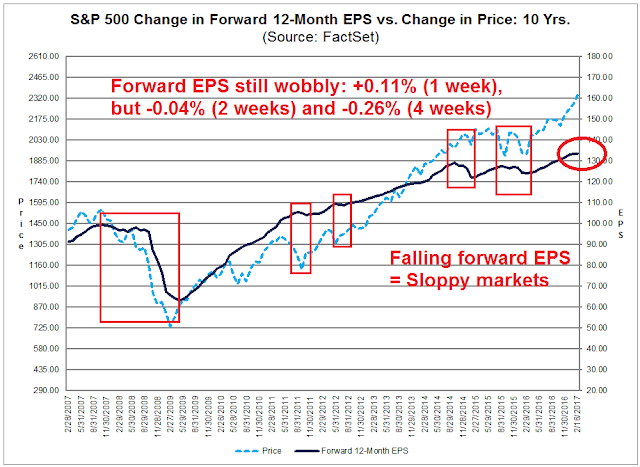 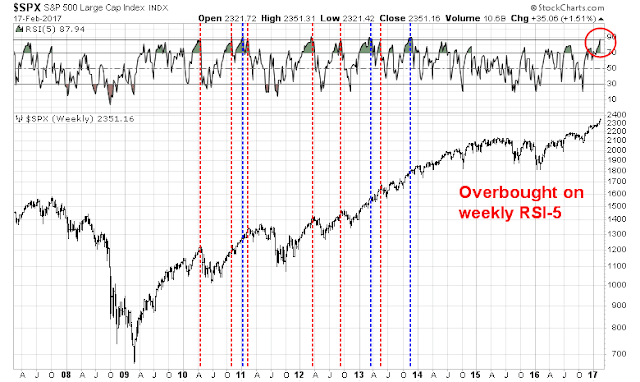 On a shorter term time frame, this Index Indicators chart of stocks above their 10 dma is starting to roll over from overbought territory. That’s a classic technical trading sell signal. 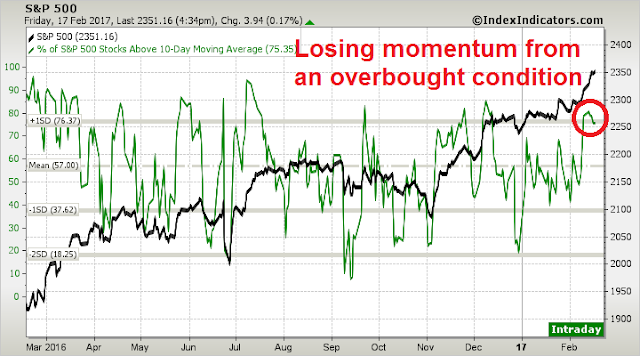 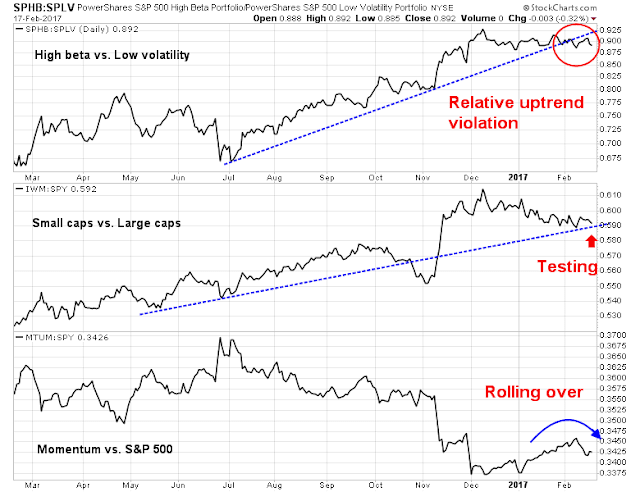 Tactically, bearish traders may want to be patient. Helene Meisler observed that the CBOE equity only put/call ratio (CPCE) has spent four consecutive days under 0.60. The market is certainly overbought on this metric. 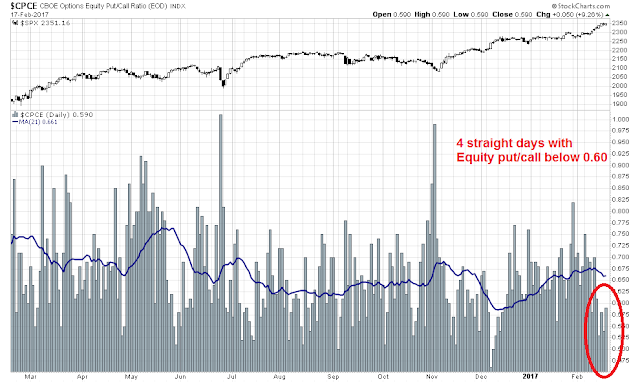 I conducted a study of past episodes, which indicates that such overbought markets don’t necessarily decline. Short term returns have been weak, but still positive. 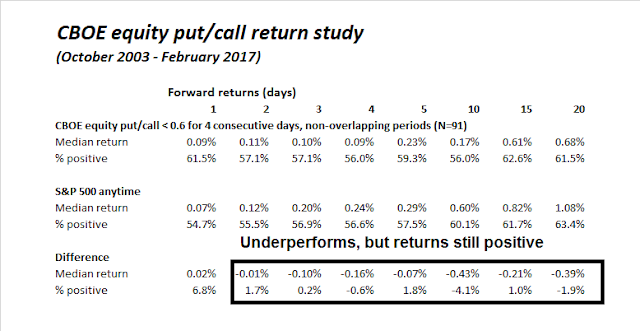 Returns are tilted to the downside once CPCE mean reverts and breaks up above 0.60. 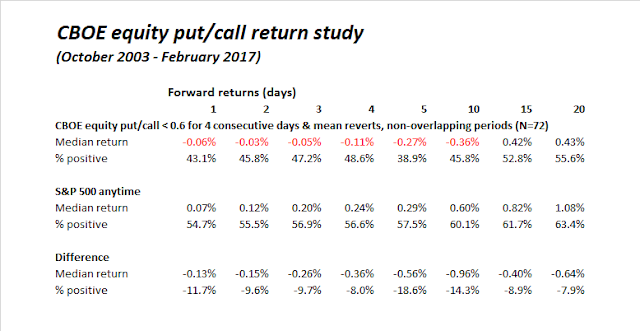 My inner investor remains bullishly positioned, though he is getting a little nervous. Should the market correct, he will be watching to see the nature of the bearish catalyst before making any further investment decisions.

My inner trader moved to cash a couple of weeks ago and he is standing aside from this market volatility.

2 thoughts on “Watch what they do, not just what they say”