A frothy, over-extended stock market – Humble Student of the Markets

I just wanted to follow up to yesterday’s post (see Don’t relax yet, the week isn’t over). One of the key developments that I had been watching has been the recent hawkish evolution in Fedspeak. Last night, uber-dove Lael Brainard gave an extraordinarily hawkish speech. She started with the following remarks:

The economy appears to be at a transition. We are closing in on full employment, inflation is moving gradually toward our target, foreign growth is on more solid footing, and risks to the outlook are as close to balanced as they have been in some time. Assuming continued progress, it will likely be appropriate soon to remove additional accommodation, continuing on a gradual path.

As a reminder, Brainard had been the Federal Reserve governor who, if given 10 reasons to raise rates and one reason to wait, she would focus on the single reason as a way of mitigating systemic risk. The last paragraph of her speech concluded, not so much with a discussion of whether to raise rates, but what to do with the Fed’s balance sheet after the rate normalization process had begun:

To conclude, recent developments suggest that the macro economy may be at a transition. With full employment within reach, signs of progress on our inflation mandate, and a favorable shift in the balance of risks at home and abroad, it will likely be appropriate for the Committee to continue gradually removing monetary accommodation. As the federal funds rate continues to move higher toward its expected longer-run level, a transition in balance sheet policy will also be warranted. These transitions in the economy and monetary policy are positive reflections of the fact that the economy is gradually drawing closer to our policy goals. How the Committee should adjust the size and composition of the balance sheet to accomplish its goals and what level the balance sheet should be in normal times are important subjects that I look forward to discussing with my colleagues.

When a dove like Brainard sounds this hawkish, there is little doubt about whether the Fed will raise rates at its March meeting.

What about Buffett’s bullish comments?

In a recent CNBC interview, legendary investor Warren Buffett stated that stocks are on the cheap side, but that assessment would change if rates were to rise:

Billionaire investor Warren Buffett told CNBC on Monday U.S. stock prices are “on the cheap side” with interest rates at current levels…

It looks like the Fed is about to raise start a rate hike cycle. So what now?

Bulls could be comforted by this historical analysis from JPM Asset Management indicating that when 10-year yields are below 5%, rising rates have meant rising stock prices (annotations in red are mine). 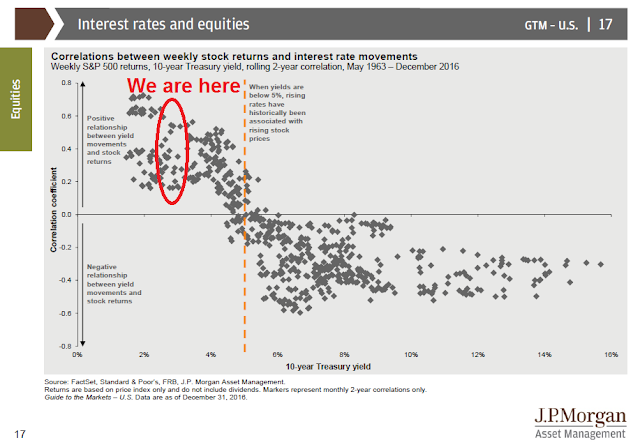 However, that analysis was only applicable because interest rates were historically much higher than they are today. Stock prices rise during the initial phase of a rate hike cycle because the bullish implications of expected higher growth overwhelms the bearish forces of higher rates and lower P/E multiples.

The latest update from Factset shows that a stalling forward 12-month EPS, which is the best normalized indicator of expected earnings growth. Past episodes of flat to falling forward EPS have seen equity markets struggle or correct. 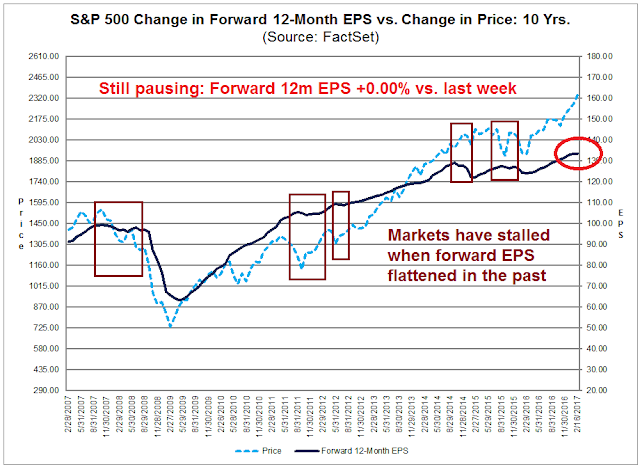 Meanwhile, Barron’s reports that the “smart money” insiders are selling at a torrid pace. Note that the period of heavy insider selling seems to parallel the latest episode of slowing growth expectations. Coincidence?

Does the combination of these conditions look like the start of a bullish thrust to you?

What about price momentum?

I received several comments from some readers that went something like this, “Don’t be an idiot. You’re fighting the (bullish) tape.”

Yesterday (Wednesday) saw the major market indices rise over 1%. As Urban Carmel pointed out, these kinds of momentum thrusts tend to occur at market bottoms, not when the market is making new highs.

I went all the way back to 1990 and looked for instances when the SPX rose 1% or more while making a 52-week high. As the table below shows, the market tended to underperform, but it was not an outright sell signal for traders.

This is a frothy and over-extended market. This combination of a hawkish Fed, a faltering growth outlook, and the overbought momentum are suggestive of an exhaustion top, rather than the start of a bullish momentum thrust.