Breakout or fake out? – Humble Student of the Markets

The SPX broke out to another all-time high on Friday in response to the positive surprise from the Employment Report. The upside breakout followed a false breakdown out of a narrow trading during the same week. The key question for traders is, “Is this an honest-to-goodness breakout, or just a fake out?”

Indeed, there is an intermediate term bullish case to be made. I’ve been writing for the past few weeks about how the combination of overly defensively oriented investors and a US growth surprise is leading to a FOMO (Fear of Missing Out) rally in US equities. Now it seems that the growth surprise is spreading around the world. As the chart below shows, the Global Purchasing Managers Index (PMI) is turning up, which is a positive sign for global growth. 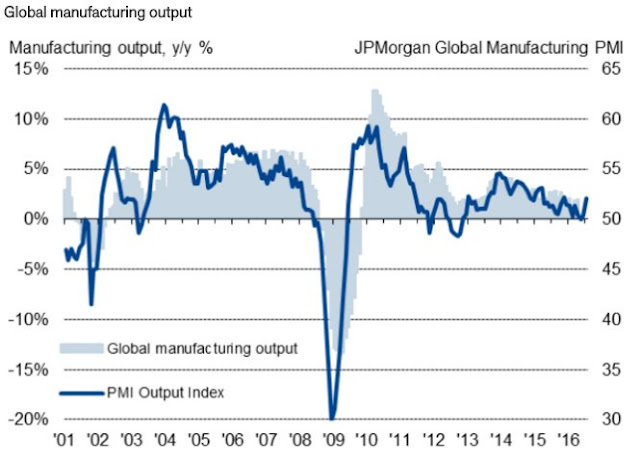 On the other hand, short-term technical indicators are flashing signals of extreme caution. The market appears to gotten ahead of itself and a pullback may be in order before stock prices can rise sustainably. The chart below from Sentiment Trader shows that sentiment is at an optimistic extreme, which is a worrisome sign (annotations in red are mine).

A tour around the world

As an overview of the intermediate term bull case, I would like to take a quick whirlwind tour around to world to see how each region’s growth outlook is progressing. My analytical framework is based on dividing the world into three trade blocs, centered around the US, Europe and China.

Let`s start our tour around the world with the US economy. Remember hand wringing over the recent disappointing Q2 GDP report? Friday’s July Employment Report has dispelled much of the anxiety over stalling growth. The headline job gains of 255K blew past Street expectations of 180K. The internals were equally positive, which was nicely summarized by this tweet from Urban Carmel.

Average weekly hours showed solid gains and it’s now at or above the levels seen at the peak of the last cycle. Note that average manufacturing weekly hours (red line) is a component of the Leading Economic Indicators and its strength is a positive sign for future growth. 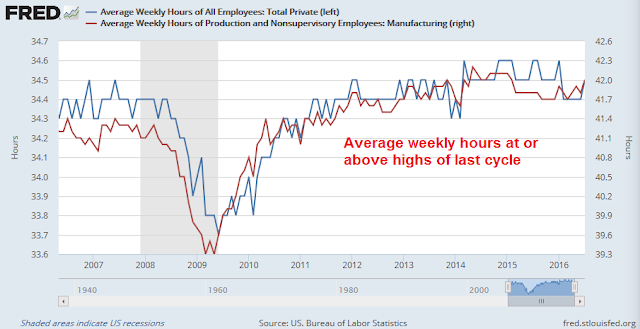 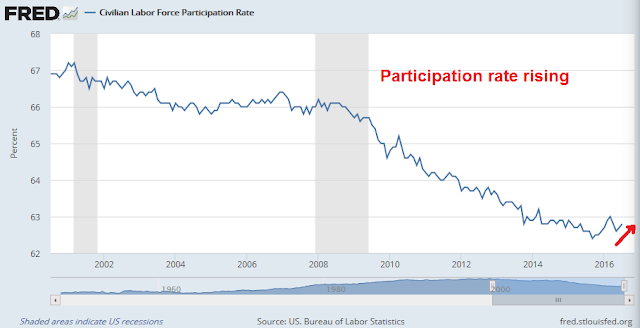 Temporary jobs, which is a leading employment indicator, started to stall out last December but it`s on the rise again. This is a positive for future employment gains. 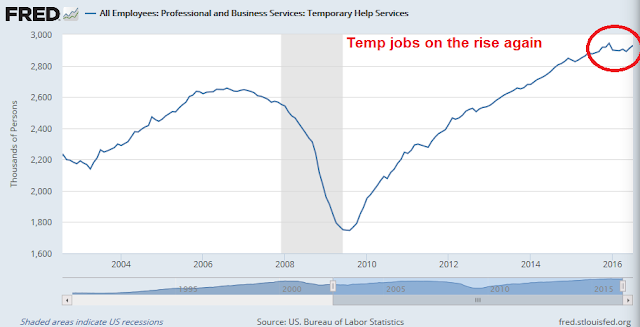 Wage gains are starting to show signs of acceleration. 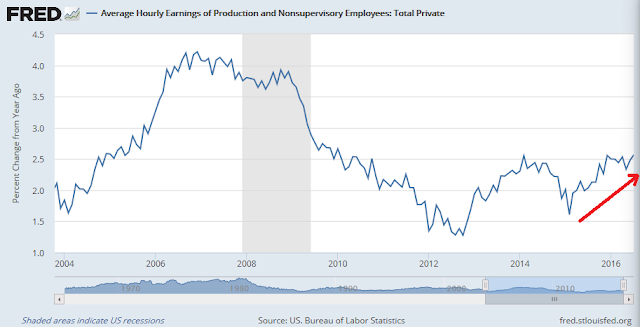 Putting this all together, we have the underpinnings of a healthy consumer who is ready to spend. On the industrial side of the economy, the upward trend in ISM is pointing a capital expenditure revival in the near future, even though the latest ISM Manufacturing survey missed market expectations. 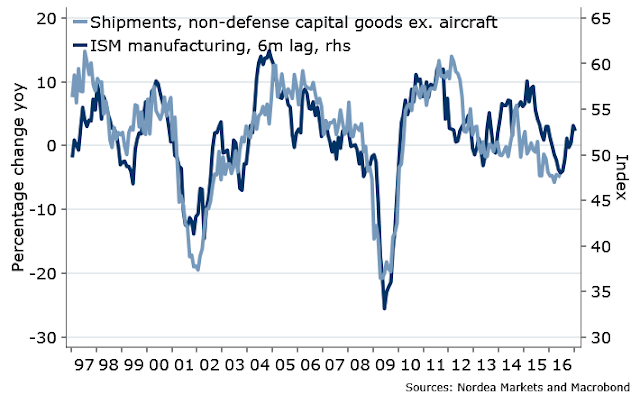 There is also cause for optimism on the capex front, Bill McBride of Calculated Risk pointed out that much of the drop-off in non-residential investment came from the energy sector and it was actually positive, ex-energy.

Excluding petroleum, non-residential investment in structures increased at a 5.5% annual rate in Q2.

These upbeat views of the American economy are consistent with the analysis from New Deal democrat, who monitors high frequency economic releases and splits them into coincidental, short leading and long leading indicators. NDD had found that both the short and long leading indicator are positive, while coincident indicators have been a bit wobbly. Based on these results, I would expect more signs of economic improvement in the near future.

Equity investors should also be encouraged from a bottom-up perspective as corporate earnings expectations are still marching upwards. The latest update from John Butters of Factset shows that with Q2 Earnings Season is nearly over, the earnings and sales beat rates are roughly in line with historical experience. What management has been saying in their quarterly conference calls has been relatively upbeat, as the negative guidance rate is below average. Consequently, forward 12-month EPS is climbing, which reflect continued Street optimism. 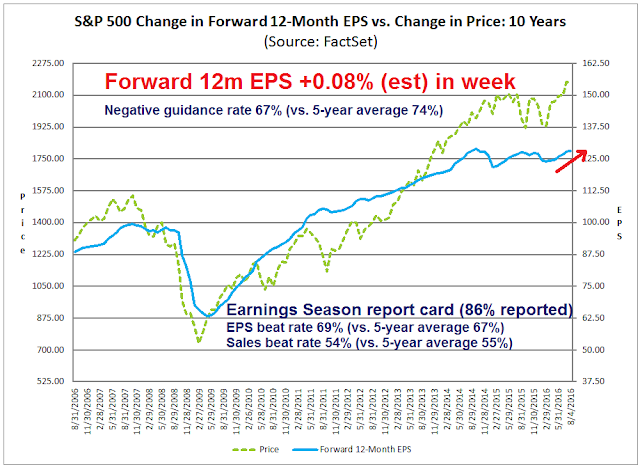 In summary, there is no shortage of bullish news in the US.

Across the Atlantic, Europe has been the sick man of the world, but there are signs of recovery. The latest Markit PMI shows a picture of steady growth. 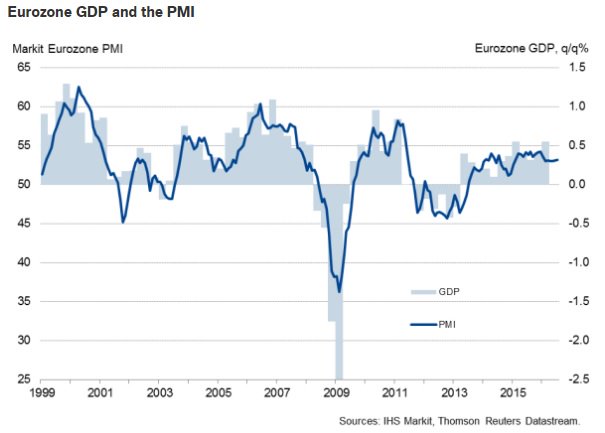 Digging further, the employment component of PMI is turning up strongly, which is a cause for optimism. 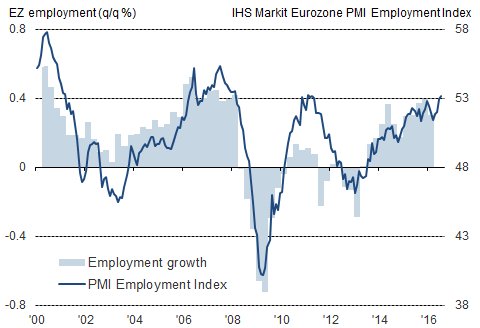 While it is the laggard, Europe is starting to look like an emergent turnaround story.

China’s economy statistics are notoriously unreliable and can be made up, so I have learned to rely on more indirect means of measuring Chinese growth. Here are the two ways that I use. One way is to monitor the stock markets of China’s major Asian trading partners, whose sensitivity to Chinese growth is shown in the chart below (via Bloomberg): 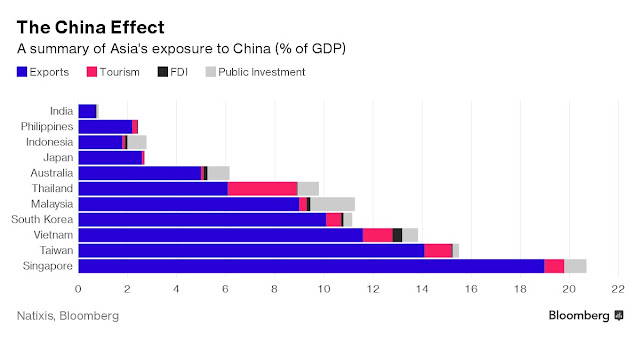 The charts of the “Greater China” stock markets are shown below. All markets, except one, are above their 50 day moving averages (dma). The only exception is Singapore, which is testing its 50 dma support. 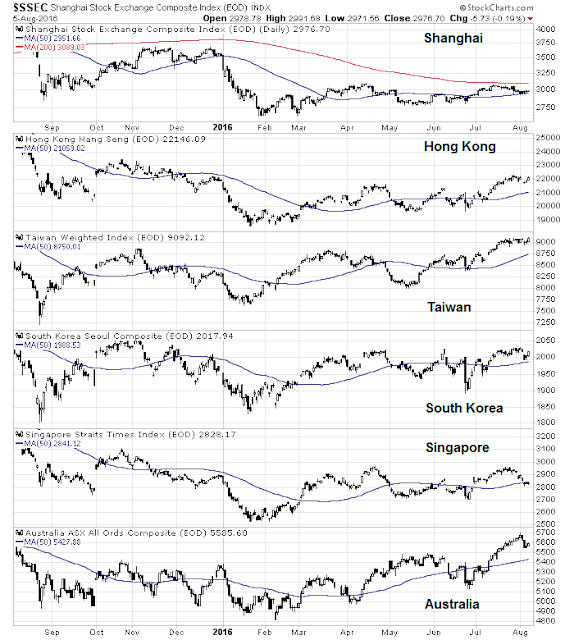 Another way to measure the health of Chinese growth is through the price of industrial metals. The chart below shows that industrial metals are in a solid uptrend, even net of currency effects. 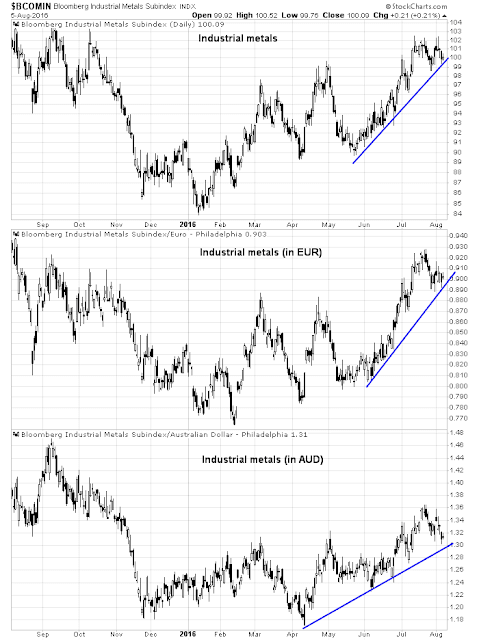 While I have expressed concerns about the longer term growth outlook for China (see How much “runway” does China have left?), the prospect of a hard landing is not in its immediate future.

The week ahead: Cautionary flags everywhere

Looking to the week ahead, however, short-term cautionary flags are popping up everywhere. The chart below shows the SPX A-D Line (top panel), SPX (middle panel) and the relative performance of a high beta ETF (SPHB) against a low volatility ETF (SPLV) as a measure of risk appetite (bottom panel). As the chart shows, the SPX A-D Line (top panel) also did not confirm Friday’s upside breakout with a new high. In addition, risk appetite has not been able to break out of the relative downtrend and therefore constitutes another non-confirmation signal. 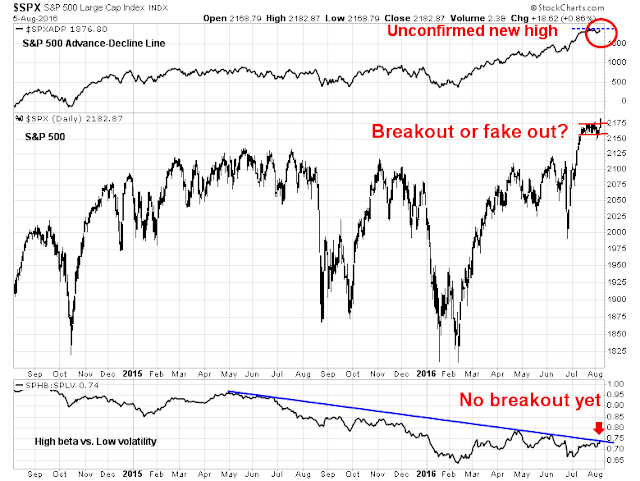 I also tweeted the following warning on Friday. The VIX Index had fallen below its Bollinger Band in the course of Friday’s market rally. Past instances (marked by vertical lines) have tended to resolve themselves with either consolidations or minor pullbacks. 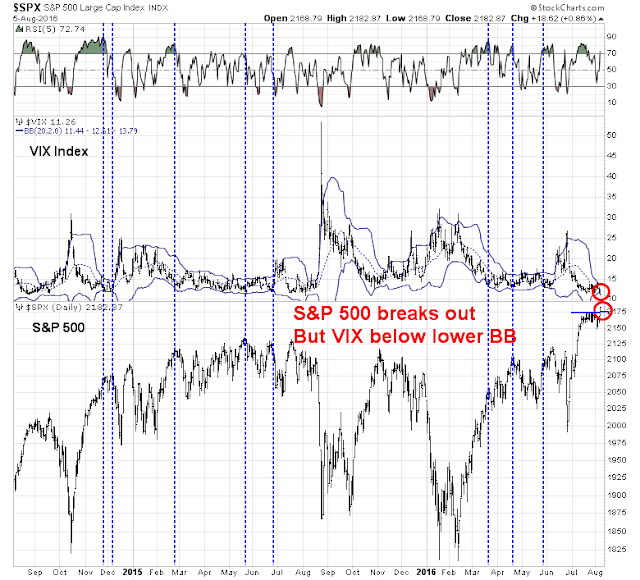 Dana Lyons pointed out last week that inverse ETF volume is historically low, which is a sign of trader complacency that can lead to short-term corrective action. As the sample size is low (N=5), so take this analysis with a grain of salt. 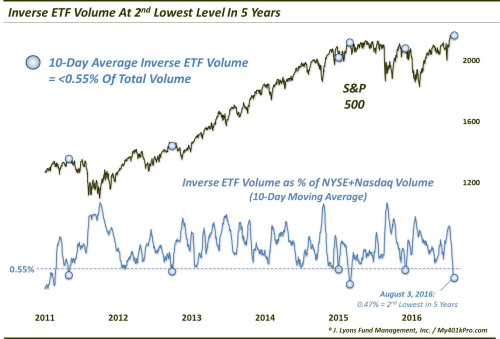 My inner investor remains upbeat on the US stock market and he has an overweight position in equities. Any corrections that occur are likely to be mild and he is unconcerned about minor squiggles in stock prices.

My inner trader has been very bullish, but he took some partial profits Friday by selling his high-beta small cap ETF. While he remains constructive on equities, the short-term risk-reward ratio has deteriorated sufficiently to take some chips off the table. Should the market weaken in the days ahead, he anticipates that he will be buying again.

7 thoughts on “Breakout or fake out?”