Buy the shallow pullback – Humble Student of the Markets

Mid-week market update: After spending over two weeks in a narrow trading range, the SPX broke down out of that range yesterday and tested technical support at the 20 day moving average (dma), which was also the mid-Bollinger Band mark. At the height of the decline, the index had fallen 1% and the market was flashing short-term oversold signals.

When the market steadied soon after the open on Wednesday, I tweeted: 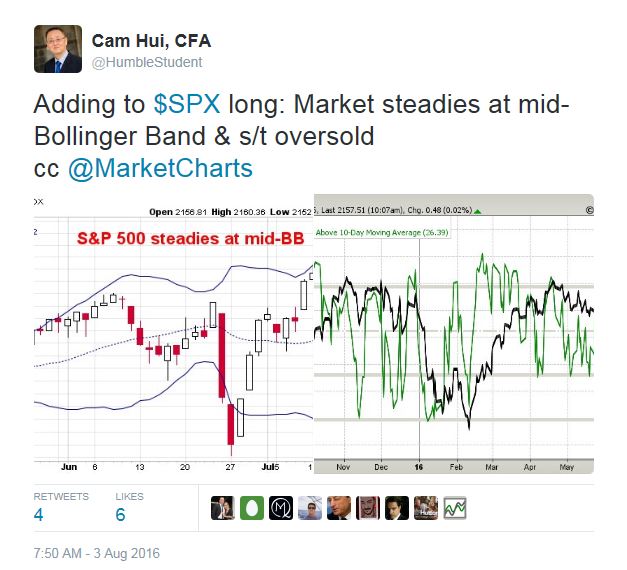 It appeared that the market had successfully tested 20 dma support:

In addition, short-term breadth measures (via IndexIndicators) had retreated to oversold levels that a bounce was likely. 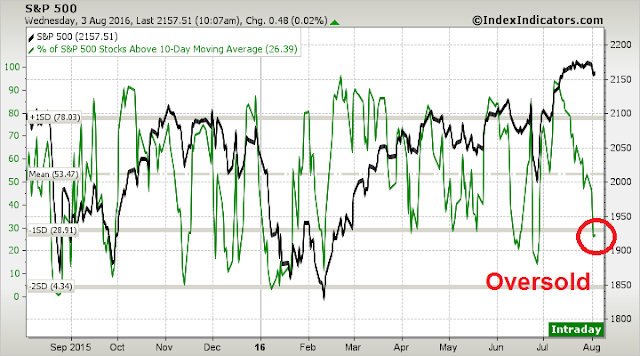 Those conclusions are based on the combination of an intermediate term backdrop of economic and fundamental growth and powerful price momentum. Under such circumstances, market pullbacks are likely to be shallow and further all-time highs would probably follow soon afterwards.

Let me expand on those points.

I have been writing about a US growth surprise for several weeks. It seems that the growth rebound is becoming global. Gavyn Davies noted that their “Fulcrum nowcasts for global economic activity have identified a broad pick-up in growth in many major regions, both in the advanced economies and the emerging markets”. 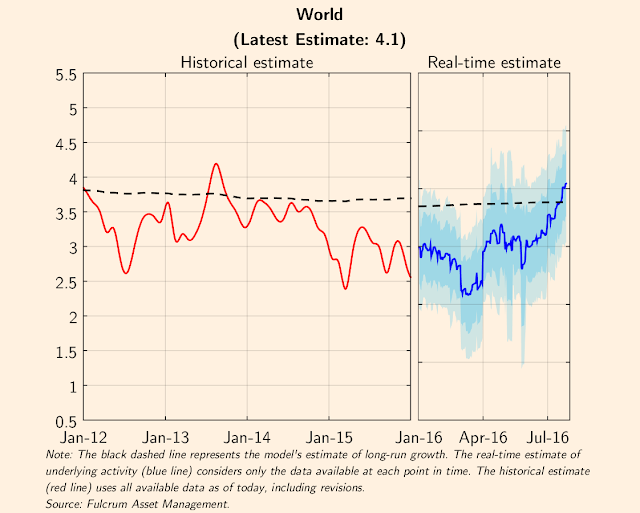 Ned Davis Research came to a similar conclusion and saw the hints of a H2 global rebound. 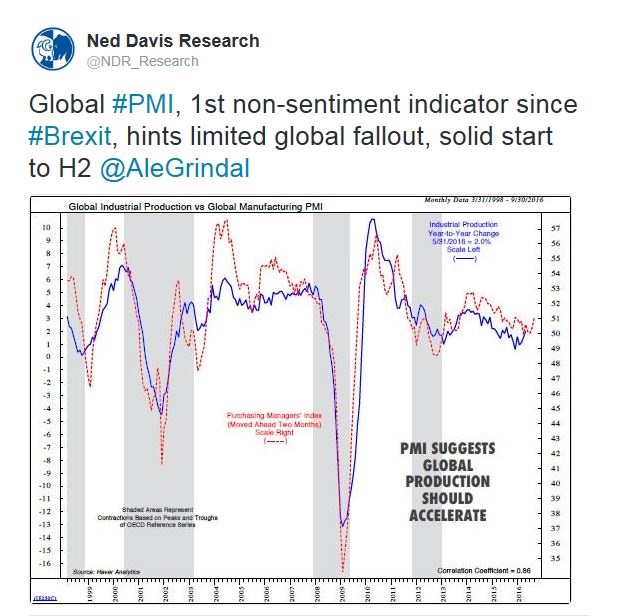 The bond market is also getting excited about growth. The 10-2 year yield curve is steepening. A widening spread between the 10-year and 2-year UST yields is a sign that the bond market is discounting high growth.

The fundamental and macro backdrop for the surge in equity prices since the Brexit panic bottom has been a combination of a growth surprise, which I have documented above, and wrong-footed positioning, where both institutions and individuals were collectively caught off-side with overly defensively oriented portfolios. Viewed through a technical analysis lens, the market is benefiting from a powerful surge of price momentum as a result of investors playing catch-up. Such episodes have tended to resolve themselves bullishly in the past.

There have been many studies on intermediate term momentum surges, so I won’t repeat all of them. This study from Nautilus Research is just one example, which suggests further price gains ahead on a multi-week and month time frame. 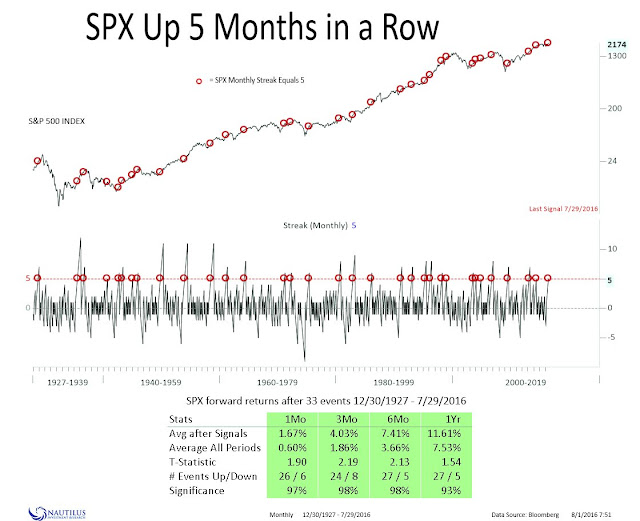 Against a bullish intermediate term fundamental and technical backdrop, the narrow consolidation after the bullish price surge off the Brexit panic low should therefore be interpreted as a pause. Barring significant macro or political surprises, the intermediate path of resistance is up and pullbacks are likely to be shallow. Chris Ciovacco recently wrote about the bullish implications of an index holding above its breakout point, which is roughly the 2120 level for SPX:

Any breakout can fail, but as noted above, the current set of breakouts have already passed the textbook window for a typical failed breakout. Could the breakouts still fail? Sure they could. However, as long as the SP 500 can hold above the 2,100 to 2,135 range, the higher the odds equities have more upside. If the S&P 500 cannot hold 2,100, we will be giving our growth-oriented positions a shorter leash.

Here is Ned Davis Research with a study of market action after narrow consolidations. If history is any guide, 6-12 month returns after such episodes tend to be above average. 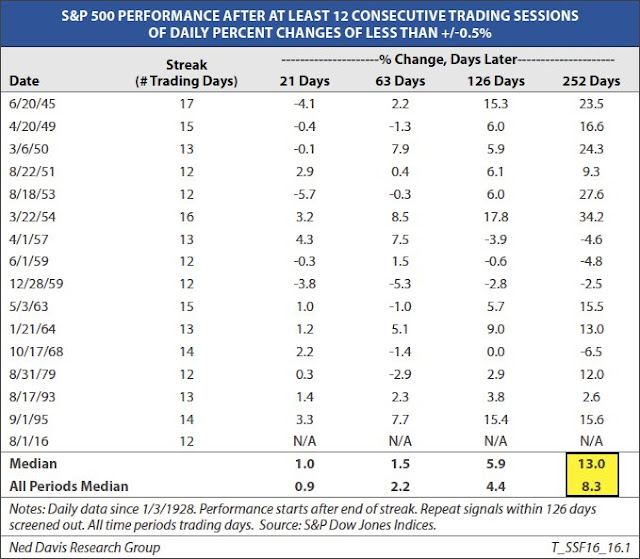 Fast forward to today. The SPX has broken down out of a narrow trading range yesterday (Tuesday). Support has been found at the 20 dma. Both short-term and intermediate term (1-2 week) trading indicators show the market touched oversold or near oversold levels. 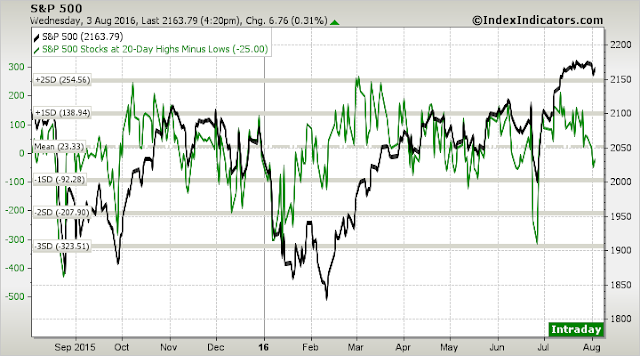 My inner trader, who is already partially long the market, believes that these conditions represent a low-risk entry point for additional commitments to the long side. Downside risk should be limited to the breakout point at about 2120, which is also the level of the 50 dma, while upside potential suggests a rally to new all-time highs.