Worried about US equities? Here’s an alternative! – Humble Student of the Markets

I have a suggestion for value oriented investors who are uncomfortable with my market blow-off thesis for US equities (see How to get in on the ground floor of a market bubble and Get ready for the melt-up). What about buying Europe?

To be sure, an unusual level of anxiety about Europe has arisen lately. This can be illustrated by the latest BoAML Fund Manager Survey. When asked about the biggest driver for equity prices for the next six months, the unexpected answer was “European risk premium”. As the chart below shows, the issue was not on anyone’s radar screen in the previous month (chart annotation mine). 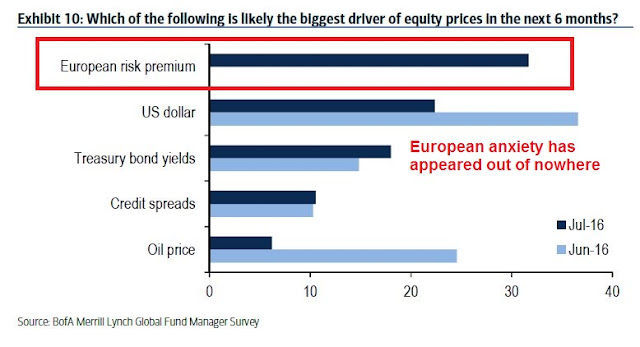 The FMS also showed that institutional managers were fleeing eurozone equities in droves: 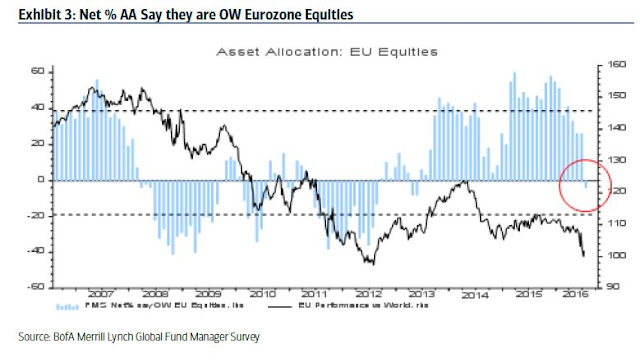 …and they had already sold down their UK equity position to very low levels. 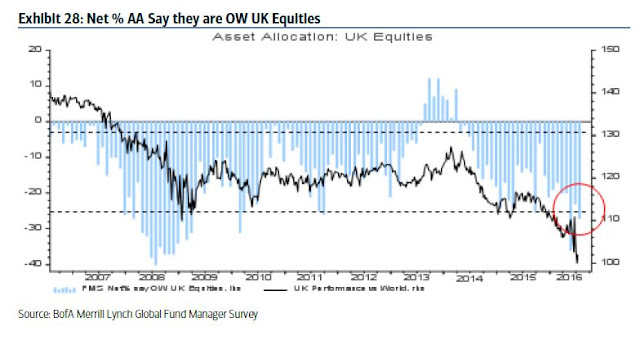 The panicked reaction over Europe is consistent with the anecdotal evidence gathered by Andrew Garthwaite of Credit Suisse when he made the rounds of institutional accounts in the US, Europe and South Africa:

Capitulation on Europe. Many US clients believed Brexit meant the end of the euro (with Italian constitutional referendum being the next key event). Outflows are close to record highs, valuations are back to Greek crisis lows on P/E relatives yet earnings and economic momentum are showing signs of relative stability.

He went out to detail the main concerns of US clients:

Most US clients believe there will be another flare up of the European political/economic crisis. The Brexit vote reminded investors of the fundamental shortcoming of the euro: a monetary union without a fiscal, political union or proper banking union (only 0.8% of deposits will be commonly insured by 2024). The particular areas of concern were:

Let me address those issues, one at a time.

If there is anything that I’ve learned in the past few years with the progression of European crises, such as Greece, Cyprus and Brexit, it`s that Europeans are very good at coming together to eliminate tail-risk, usually by socializing the cost. Americans who view European through the prism of a US political and financial framework often don`t realize what is said publicly is mostly theatre in order to strike a bargain about how the socialization burden is shared. The real negotiations occur behind closed doors and through back channels that most of us never see.

On the surface, those threats appear very real, but those risks are overblown. A Eurobarometer survey done in April (pre-Brexit) shows that when push comes to shove, most Europeans self-identify as European, rather than as members of their own country. The UK was a glaring exception and, even there, Brexit is showing how messy the process of standing apart from Europe is. 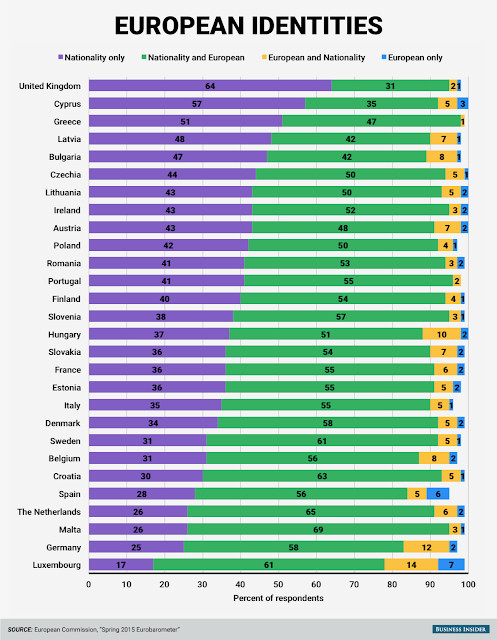 In the wake of the Brexit vote, the results have scared the living daylights out of many euroskeptics. Sentiment shifted to a greater pro-European tone (via Reuters):

In an IFOP poll taken between June 28 and July 6, a few days after Britain’s vote to leave the EU, support for EU membership jumped to 81 percent in Germany, a 19 point increase from the last time the question was asked in November 2014.

In France, support surged by 10 points to 67 percent. In both countries, that was the highest level of support since at least December 2010, when IFOP started asking the question.

“Brexit shocked people in the EU,” Francois Kraus, head of the political and current affairs service at IFOP, told Reuters on Wednesday.

“Seeing the Eurosceptics’ dream come true must have triggered a reaction in people who usually criticise the EU and blame it for decisions such as austerity measures.

In the euro zone’s third-largest economy, Italy, support also rose 4 points, to 59 percent, the highest since June 2012. In Spain, some 81 percent of those polled said EU membership was a good thing, a 9 point increase in 2-1/2 years.

People in other major European countries were not keen to follow Britain’s example and hold referendums on EU membership: a majority of people in Germany, France, Italy, Spain and Poland, said they were against such votes.

Should a referendum be held, all five countries would vote to remain in the EU, with majorities of at least 63 percent.

In light of these results, the risks that the Italian referendum would result in “Quitaly” or the anti-establishment and euroskeptic Marine Le Pen becoming the next French president are fading.

A full recap of said banking sector and its estimated €200bn of gross non-performing loans would, according to JPM, “require up to €40 billion (less than 2.5% of GDP)”.

While the NPL shortfalls in Italy are serious, the chart below puts the problem into some context. The problems in Ireland and Greece are even worse, but no one is panicking over those countries. 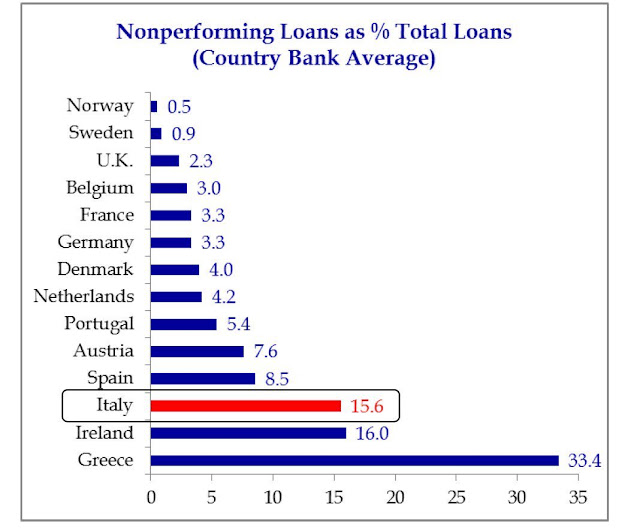 Under the new European banking rules, a sovereign can recapitalize its banks only if the creditors take a hit. Here is JP Morgan, via FT Alphaville:

According to the new rules, any government funding is conditional on pre-emptive burden sharing, which amounts to wiping out/haircutting private investors’ stakes in the banks’ capital (equity, subordinated and senior debt). In our view, such an approach would be extremely risky and ill advised, and the likely burden sharing of retail-held bonds would send shock waves across the domestic depositor base.

The problem is, much of the Italian banking paper is owned by Italian households and forcing haircuts would send the economy into a tailspin. As Italy represents the third largest economy in the eurozone, an economic problem has become a political problem. Cue the theatre and the endless European bargaining. Here is JPM again:

Article 32 of the BRRD explicitly foresees some exception to the bail-in rules in the case of systemic risk. It is hard to argue that the Italian case does not raise systemic risk, in our view. Furthermore, the high NPLs burden is a legacy rather than a recent problem, and we expect that this would receive further recognition by the relevant authorities (the European Commission and the ECB) in due time.

Ultimately, an adequate solution to the Italian banking woes only involves manageable financial commitments, in our view. A solution is rather a matter of political will, which in turn revolves around the German stance on the policy response to the Brexit shock. So far, Germany has shown an intransigent position, but we believe that rising fears about the systemic implications of a self-inflicted Italian banking crisis will trigger a rethink. As discussed, the details on the treatment of retail investors are important, and collateral damage should be avoided.

I don’t know how this “crisis” will end up, but the level of burden sharing within the eurozone is manageable. The eurozone agreed to a new €86 billion rescue program for Greece last year, so what’s a commitment of up to €40 billion for the third largest economy in the euro?

Indeed, Banca Monte dei Paschi di Siena, which is the bank with the worst balance sheet, cobbled together a rescue package on Friday. While more work needs to be done, tail-risk from Italian banking is fading fast (via the WSJ):

The bank said it plans to unload €9.2 billion ($10.3 billion) in net nonperforming loans to Atlante—a fund orchestrated by the government and financed by Italian banks, insurers and pension funds—and other investors.

Monte dei Paschi will also raise up to €5 billion in fresh capital—or nearly six times its market capitalization—to rebuild its capital cushion. The bank said it still has to win approval from regulators, including the European Central Bank. 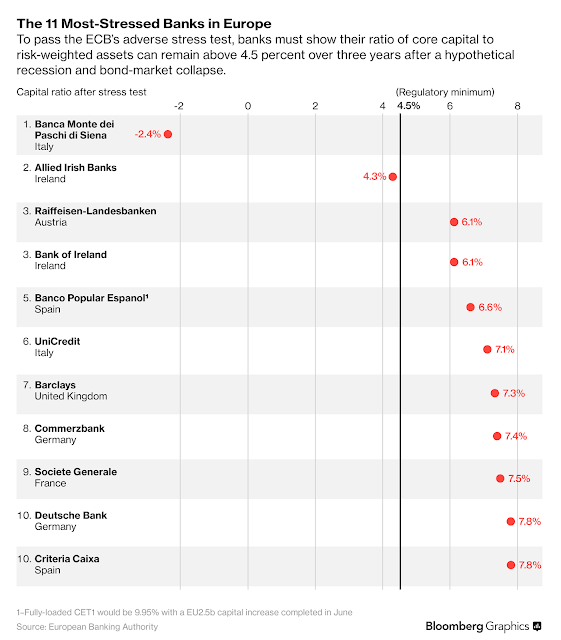 Once you take away the tail-risk, the “European risk premium” problem raised in the BoAML FMS is far more benign. Already, we are seeing signs of healing in the markets. Remember CoCo bonds? Bloomberg details how they’ve recovered:

It’s been a roller coaster six months for investors in bank debt. At the beginning of the year, the market for contingent convertible bonds, known as CoCos, seized up, imperiling the post-crisis effort to resolve banks without recourse to taxpayer funds.

Fears over Deutsche Bank AG’s ability to pay a coupon on its Tier 1 securities fed the market’s perception that issuers across the board might struggle to service interest payments, thanks to regulatory changes towards the bank capital regime. That caused a market maelstrom in February. The primary market for such hybrid securities froze, and debt prices tumbled.

Since then the market has rebounded sharply, despite the U.K.’s vote to leave the European Union and the upcoming EU-wide bank stress tests, which have prompted fresh concerns over the health of some Italian banks. Amid regulatory changes seen as friendly to investors in hybrid securities, and Deutsche’s uninterrupted coupon payments, an index for the high-risk, high-reward securities is now up 3 percent this year, having gained as much as 15 percent from the February low. 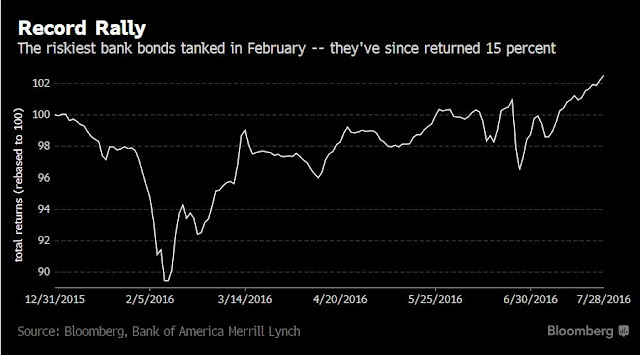 In the absence of tail-risk, European equities look very intriguing as an investment. Andrew Garthwaite highlighted the fact that consensus estimate revisions in Europe are outpacing US revisions. 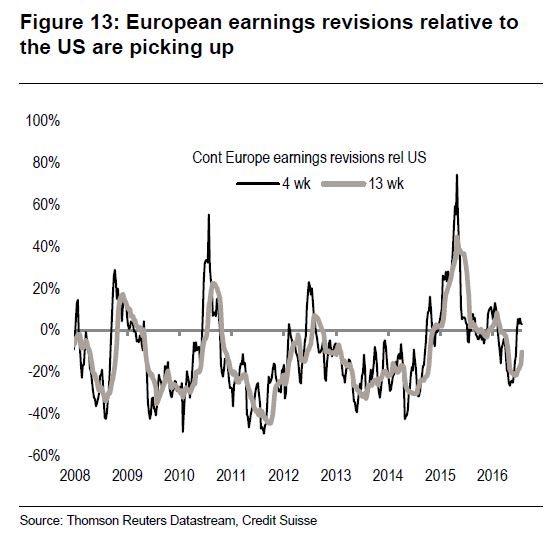 As a point of reference, Factset reports that US estimate revisions are rising and both earnings and sales beat rates are above their 5-year averages this earnings season. 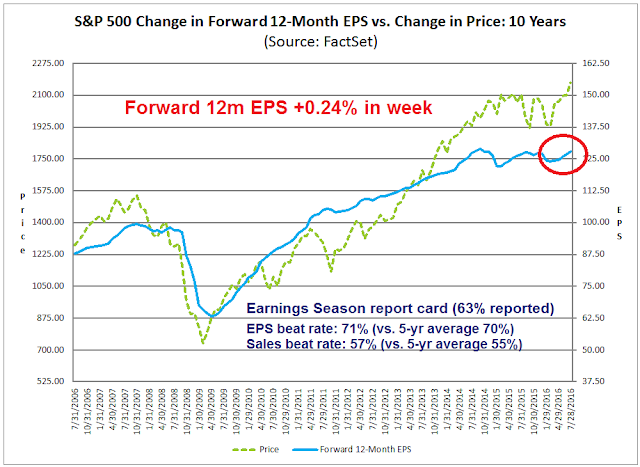 Jeroen Blokland pointed out how eurozone GDP growth is beating US GDP growth, though the Q2 GDP was depressed by an anomalous inventory adjustment (see the discussion in my previous post Get ready for the melt-up). 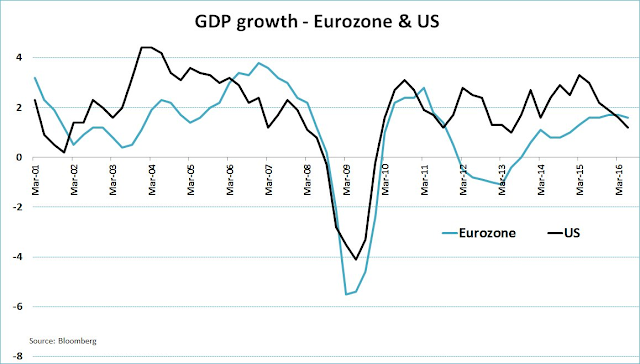 Blockland also highlighted the disparity in performance between US and eurozone GDP and equities. Spot the divergence in this chart: 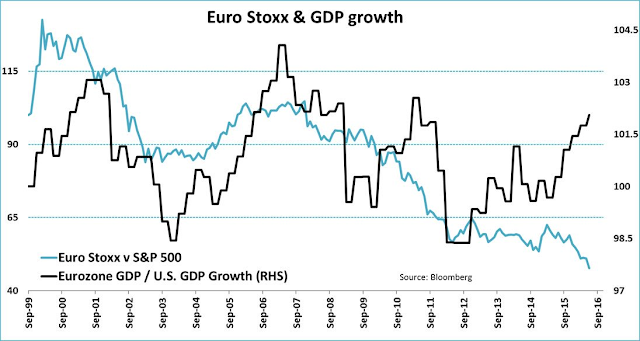 We are seeing signs of a possible bottom in relative performance in eurozone equities. The chart below shows the relative performances of the Euro STOXX 50 (black) and SPX (green) against the MSCI All-Country World Index (note all are in USD so currency effects are included). While US stocks has been in a steady relative uptrend, eurozone equities have been underperforming for close to a year, but they have started to turn around.

In conclusion, the combination of diminished tail-risk, better fundamental outlook for Europe and market action are all cautious signs of green shoots for the European stock market. The washed-out nature of European equities therefore makes them an intriguing alternative for value investors. The additional catalysts of receding tail-risk and positive growth outlook also lowers the risk that European stocks represent a value trap. In fact, European equity investors have the best of all worlds when compared to US equity investors. Valuations are cheaper and so is growth.

For investors who can’t stomach my Greater Fool market blow-off thesis for US equities, European equities could represent a recovering value play that has the potential to outperform US equity assets in the next 6-12 months.

6 thoughts on “Worried about US equities? Here’s an alternative!”