How much “runway” does China have left? – Humble Student of the Markets

As we await China’s Q2 GDP report in the face of sharply lower trade figures, it’s useful to ponder once again the China tail-risk question. For years, analysts have been warning about impending doom in China because of the growing mountain of unsustainable debt (see Kyle Bass, Jim Chanos, Andy Xie and George Soros). 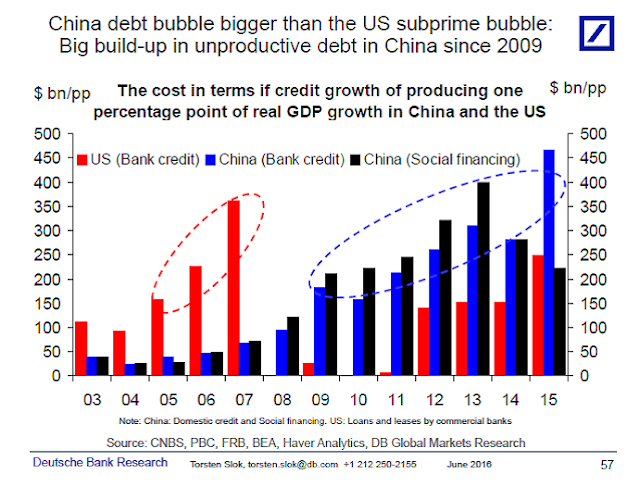 In the past, every time China has gotten to the edge of a hard landing, Beijing has confound the bears by kicking the can down the road and forestalling a crisis. That kind of “extend and pretend” strategy is perfectly viable if the road is long enough, but the key question for investors is, “How long is the road?”

The answer according to Michael Pettis, experienced China watcher who has more or less called every turn in China for the last decade, is three years. In his latest blog post, Pettis made a number of optimistic assumptions about China’s debt load and believes that they are likely to experience a debt crisis within a 2-3 year time frame:

[E]ven after overwhelming the analysis with implausibly optimistic assumptions – discounting the disruptions caused by shifting strategies, for example, assuming financial distress costs are close to zero, and ignoring the impact on debt sustainability that results from rolling over a significant share of total loans that cannot be repaid – it is pretty clear that without a major change in policy or a tolerance for slower GDP growth it will be hard to prevent debt from becoming unsustainable. At some point, and my guess is that this would occur within the next two to three years at current growth rates, China runs the risk of a very disruptive adjustment as it reaches debt capacity limits, perhaps even the risk of negative GDP growth rates.

Pettis went on to model China’s debt trajectory under a number of assumptions. The base case is no rebalancing with GDP continuing at a 6-7% pace. Under that scenario, debt grows at 12-14% per annum and debt to GDP rises by 25% in 2020 and debt growth rises to 15-18%. 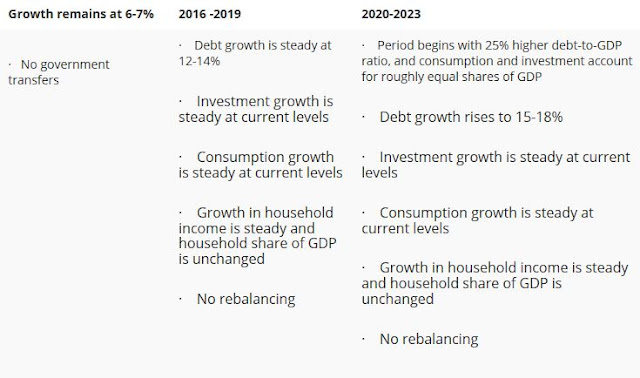 Pettis went on to vary the assumptions in his growth model. He managed to get debt growth under control if GDP growth slowed to a 3-4% rate while transferring 3-4% of GDP to the household sector. The idea is to shift growth from State-owned Enterprises (SOEs) to private Small and Medium Enterprises (SME). But how plausible is that 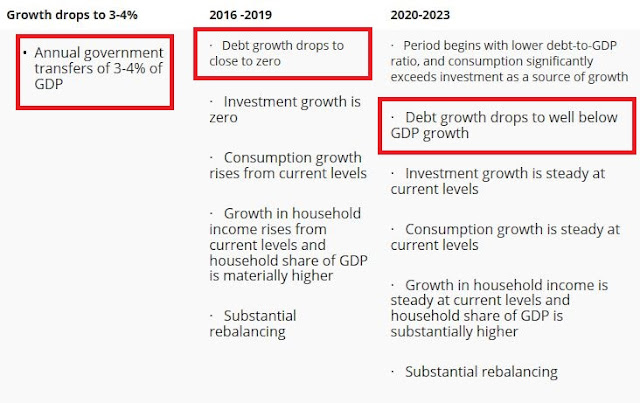 Under such a scenario, the idea is to shift the engine of growth from State-owned Enterprises (SOEs) to private Small and Medium Enterprises (SMEs). While overall growth levels would slow, this kind of rebalancing would make the debt load trajectory more sustainable. But how realistic are those assumptions?

Notwithstanding the fact that 3-4% GDP growth would be regarded by many as a “hard landing” for China, government transfers of 3-4% to the household and private sector would be extremely difficult to achieve politically. It would necessitate the wholesale financial suicide of Communist Party cadres who are running many SOEs. Moreover, it would mean a transformation of the banking culture:

The point is that banking systems do not allocate credit on the basis of a set of well-understood rules that can easily be manipulated or redirected. The credit allocation process is the outcome of a complex set of institutions that are at least as much political as economic in nature. To transform this process requires a long and difficult transformation of these political institutions.

It would also require, in China’s case, the creation almost from nothing of a credit culture, replacing a banking culture in which loan officers paid very little attention to credit risk because money was mostly lent directly or indirectly to government or government-related entities (most or all of which enjoyed implicit or explicit guarantees). Beijing would have to transform this banking culture into one that is driven by the credit evaluation of businesses that are often not very transparent and that operate in complex systems of ownership. But it is not easy to build a credit culture, and it is a virtual certainty that any attempt to do so quickly will, very soon after it began, generate large amounts of NPLs.

I don’t hold much hope for this kind of rebalancing at such a substantial level. Tom Orlik recently highlighted the latest investment data, which showed that most of the investment growth was coming from SOEs and not private businesses. 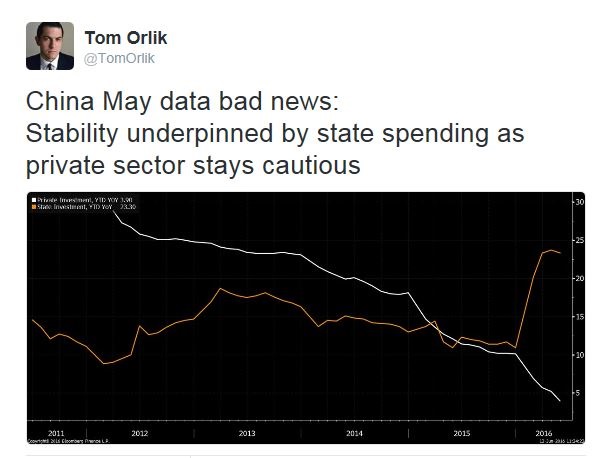 Not your father’s EM crisis

Still, a Chinese hard landing won’t be anything like the kinds of emerging market crises in the past. While the absolute level of external debt of just under USD 1 trillion appears to be large, you have to view that amount in a context. Global equity markets suffered USD 2 trillion in losses on the day after the Brexit decision. In addition, China has an enormous reserves and enjoys a current account surplus to service that debt. Moreover, some of the recent “capital flight” went to pay down USD denominated debt, which will likely turn out to be a prudent move.

Should we see a crash, most of the non-performing loans (NPLs) will be denominated in CNY. Should Beijing opt to save the banking system, as well as parts of the shadow banking system, most of the costs will be borne by the household sector in the form of renewed financial repression. Under such a scenario, the cost would be a prolonged period of slow growth.

The threat to the global financial system of a China hard landing or crash is therefore relatively low. Still, USD 1 trillion is still a lot of money and there is always the possibility that some banks get caught up with excess exposure to China, but the likelihood of another Lehman Moment won’t be as high as it was in 2008.

Just because the global economy is largely insulated from a Chinese hard landing, a RMB denominated NPL blow-up in China won’t be pleasant. HSBC (via Business Insider) detailed the rapid growth of the shadow banking system, in the form of off balance sheet wealth management products (WMP) and WMPs will amount to one-third of retail funding in (you guessed it) two years:

If Wealth Management Products (WMPs) continue to expand at their current rate, in two years’ time as much as a third of the retail funding activities in China’s banking system will take place off balance sheet. That will make it even harder for regulators to estimate risk in the banking sector and to monitor linkages between the country’s shadow banking activities, capital markets and the real economy.

WMPs lack transparency. While the authorities have taken steps to rein in their growth, WMPs are sucking the liquidity out of the Chinese financial system because they offer higher rates of return, but with opaque risk.

The WMP problem is now so huge that it’s starting to suck up cash lying around in the Chinese economy like a horde of locusts. Economists use “M2” to describe the part of an economy’s money supply that includes cash, checking deposits and what is known as “near money” — extremely liquid assets like savings deposits, money market mutual funds and other time deposits.

HSBC points out that M2 growth has settled in around 12%-15% a year over the last few years. It was 20% while the economy was growing faster. WMPs, HSBC analysts estimate, are growing much faster than that.

“What that means, quite simply, is that money is flowing into WMPs faster than the pace at which it is being created, implying that liquidity is being sucked in from the real economy,” the analysts wrote. “In our opinion, the sustainability of such a situation is questionable, and this is potentially one of the key factors that could trigger a systemic risk event down the road.”

The risk of political upheaval would rise should the Chinese financial system blow up as Beijing loses control of the banking system. Branko Milanovic is the academic who produced the landmark study on inequality that outlined how global inequality had fallen but local (within country) inequality had risen, especially in the developed market economies.

Milanovic recently talked to Forbes Asia and here is what he had to say about China:

The legitimacy of the Chinese government depends, to a large extent, on the delivery of a very high rate of growth. Increasing inequality was acceptable when everyone was getting better off. Now inequality could become a political issue, particularly because incomes have been acquired by corruption and political connections. That may be true in other places too, but China does not have the political process to allow new parties and leaders to come into power. So that’s the danger inequality poses for political stability in China.

Milanovic expanded on this point in a recent post on his blog:

[A] similar process of rising populism in China seems difficult to explain because it is accompanied not by a declining but by a rising middle class. The modernization theory leads us to believe that the rising share of the middle class should propel democratization. In effect, this is what we have observed over the past 40 years, from the Carnation Revolution to Portugal to the fall of Communism or the spread of democracy in South Korea and Taiwan and in all of Latin America.

Could China be an exception to this “regularity”? It is the same question probably that the Communist party leaders ask themselves. If they answer it in the affirmative, they would be throwing in the towel in a fight to maintain their rule. Since they seem unwilling to do so, and are becoming aware that the ideology of “GDPism”, founded on an infinite growth of real incomes by close to double-digit numbers, cannot be maintained, they have tried to move the public opinion in the direction of populism, whether of mild Maoist or of soft nationalist kind. Neither of these two tendencies is yet strong enough or sufficiently poisonous, but the potential to crank it up if needed is there. Thus, in the Chinese case, the rising tide of populism is not caused by an economic failure but on the contrary by economic success which is making the maintenance of the old political system more difficult, or is incompatible with it. This is a contradiction between the development of the forces of production and inadequacy of the superstructure that every Marxist would easily recognize.

Now imagine a crisis in China stemming from the confluence of a pending disruptive debt adjustment and rising middle-class incomes that puts pressure on democratization. The markets wouldn’t like that at all.

I am not trying to be alarmist and the intent of this post is most emphatically not an  “OMG, sell everything” warning. If China were to get hit with some minor crisis today, the PBoC has sufficient resources to kick the can down the road for another year, but that road is getting shorter.

Investor need to watch for the trigger for the onset of a crisis. Don’t over-react, yet.

4 thoughts on “How much “runway” does China have left?”