Brexit: Fantasy vs. reality – Humble Student of the Markets

I am seeing an unusual level of rising anxiety over the political implications of Brexit. Last week, Stratfor published a report entitled “Brexit: The First of Many Referendum Threats to the EU”, which detailed the threats of additional referendums to the future of Europe.

Jim Rogers, writing in the Daily Reckoning, also painted a dire picture of the world after Brexit:

Are we at a point right now where it feels like it’s accelerating. People all over are very unhappy about what’s going on. If you read history, there are a lot of similarities between now and the 1920s and ’30s. That’s when fascism and communism broke out in much of the world. And a lot of the same issues are popping up again.

Brexit could be a triggering moment. This is another step in an ongoing deterioration of events. It’s also an important turning point because it now means the central banks are going to print even more money. That may prop the markets up in the short term…

The European Union as we know it is not going to survive. Not as we know it. Britain voted to leave, and France could very well be next. Why France? One of the main reasons is because the French economy is softer than the German economy. At least in Germany people are still earning money and making a living, despite all the recent turmoil. In France, the same malaise that’s settling over the U.S. and other places is settling in. And it’s going to spread.

There is no place to hide with what’s coming. I’m not saying it’s coming this year, or even the next. I can’t give a specific date. But imbalances are building up to such a degree, they just can’t continue much longer.

In addition, Philippe Legrain fretted about Brexit opening the door to European disintegration in an essay in Project Syndicate.

I beg to differ. In fact, the Brexit experience has made Europe stronger, not weaker.

I recognize that the desire for Brexit is mainly emotional and not economic. Bloomberg reports that a survey by the U.K.-based Centre for Macroeconomics shows that the main reasons that voters favored Brexit were not economic. Simply put, Project Fear did not work to scare voters to believe that the UK would be far worse off under Brexit than inside the EU. 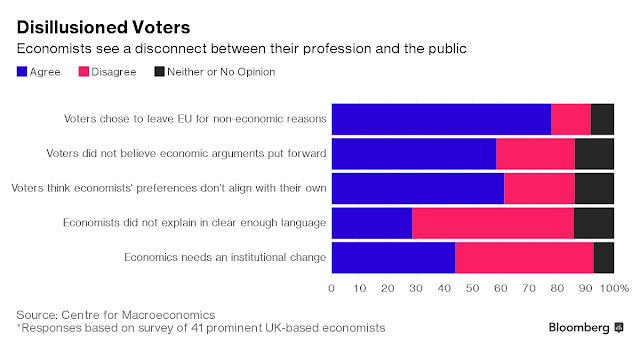 In the wake of the vote, we get silliness from the hard core Brexiteers such as this petition to remove French words from British passports. 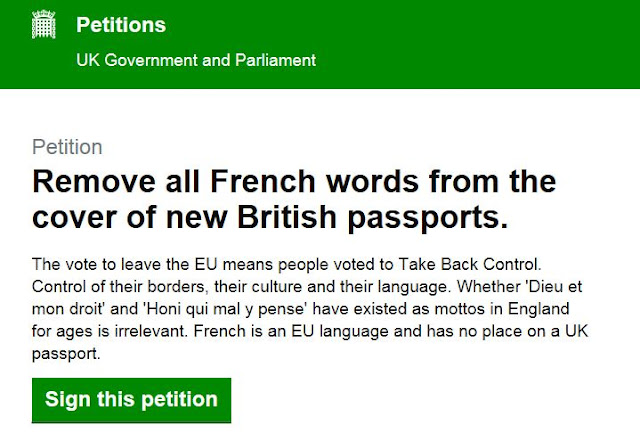 The sentiment is reminiscent of a Monty Pythonesque caricature of the English-French relations here:

…when a simple search in Google shows that even the word “passport” has French roots. 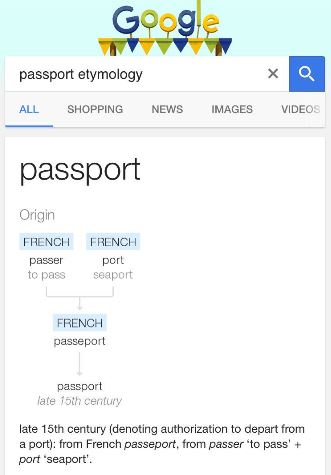 Then I came upon this fantasy of trying to re-create parts of British Commonwealth with CANZUK:

If that is why the British are leaving, the natural question is: are there any countries out there with similar values and similar income levels with whom the British have greater cultural and constitutional similarity? That is obviously a question that answers itself: Canada, Australia and New Zealand are closer to Britain, constitutionally and culturally, than anywhere in Europe. And their income levels are fairly similar: in 2014, the U.K. had a GDP per capita of about US$46,000, versus US$44,000 for New Zealand, US$50,000 for Canada and Australia a little higher at US$62,000.

Sorry, the British Empire is long gone and the Commonwealth is as effective today as la francophonie. The old supply chains, which are the key elements of Commonwealth-based trade links, have atrophied and disappeared. The world has moved on since the 1950s and 1960s. Canada’s main trade focus is on North America. Australia and New Zealand’s main customers are in Asia.

CANZUK countries occupy very different parts of the world and trade volumes between each other is relatively low by global standards. The synergies from a free-trade pact would therefore be relatively low. In addition, the share of global GDP of these countries only amount to 8% (h/t Jereon Blokland for chart).

The reality: Devil is in the details

For readers who are unfamiliar with the Brexit process, here is a useful FAQ and guide from the BBC. Needless to say, there is much that needs to be done and many details that have to be ironed out. The latest government actions show that the UK is utterly unprepared for the tasks ahead. Here are just some of the obstacles it faces:

Trade negotiations are, by their nature, detailed and intricate. Agreements can’t be slapped together overnight. Here is a real-life example to consider.

Recently, the province of British Columbia slapped on a 15% tax on real estate for any non-resident buyer as a way to alleviate the price pressure in Vancouver (see CBC story). A Toronto lawyer responded with an Op-Ed entitled “B.C. just violated NAFTA with its foreign property tax — and we could all pay for it“. He contended that NAFTA requires Canada to treat the citizens of the other signatories, namely the United States and Mexico, the same way as it treats Canadians. Slapping a tax on foreign purchasers of Canadian real estate amounted to a treaty violation. Canada also has trade agreements with numerous other countries with similar provisions as well and the tax would also violate those treaties.

There was much buzz on social media on this topic, until an alert reader pointed out that Canadian trade negotiators had already addressed that particular issue.

With any agreement, the devil is in the details. Unless you think these things through very carefully, you don’t know what could trip you up in the future.

It is therefore no surprise that as Europeans woke up and realized the implications of Brexit, Euroskeptic support fell dramatically (via Reuters):

In an IFOP poll taken between June 28 and July 6, a few days after Britain’s vote to leave the EU, support for EU membership jumped to 81 percent in Germany, a 19 point increase from the last time the question was asked in November 2014.

In France, support surged by 10 points to 67 percent. In both countries, that was the highest level of support since at least December 2010, when IFOP started asking the question.

“Brexit shocked people in the EU,” Francois Kraus, head of the political and current affairs service at IFOP, told Reuters on Wednesday.

“Seeing the Eurosceptics’ dream come true must have triggered a reaction in people who usually criticise the EU and blame it for decisions such as austerity measures.

“But when people realise the real implications of an exit, there’s new-found support for the European project,” he said.

In the euro zone’s third-largest economy, Italy, support also rose 4 points, to 59 percent, the highest since June 2012. In Spain, some 81 percent of those polled said EU membership was a good thing, a 9 point increase in 2-1/2 years.

People in other major European countries were not keen to follow Britain’s example and hold referendums on EU membership: a majority of people in Germany, France, Italy, Spain and Poland, said they were against such votes.

Should a referendum be held, all five countries would vote to remain in the EU, with majorities of at least 63 percent.

When British Admiral John Byng failed in his mission to relieve the French blockade of Minorca during the Seven Years War, he was court martialed for negligence and shot by firing squad “pour encourager les autres“. Along the same lines, the Bexit vote acted to discourage other Euroskeptics from going down the same road. That’s why I believe that the Brexit vote lessened the political risk to Europe, contrary to the claims by Stratfor, Jim Rogers and others.

The real lesson of Brexit disarray and the difficulties of the process is to serve as a lesson for Euroskeptics: pour encourager les autres.

8 thoughts on “Brexit: Fantasy vs. reality”