The correction is (probably) over – Humble Student of the Markets

Mid-week market update: About two weeks ago, my inner trader turned cautious on the US stock market (see my tweet and subsequent post Tactically taking profits in the commodity and reflation trade). I had cited as reasons the weakness from China, the commodity markets and, later, Europe (see Waiting for the storm to pass), which was based on inter-market and cross-asset analysis. (Though my inner investor remained constructive on stocks.)

Since then, the SPX weakened to test an important technical support at 2040, which represents the neckline of a potential head and shoulders formation. (As all good technicians know, a head and shoulders formation isn’t complete until the neckline is broken.) While the market did break 2040 last week on an intra-day basis, neckline support held. In addition, the NASDAQ Composite confirmed the strength today by staging an upside breakout through resistance. 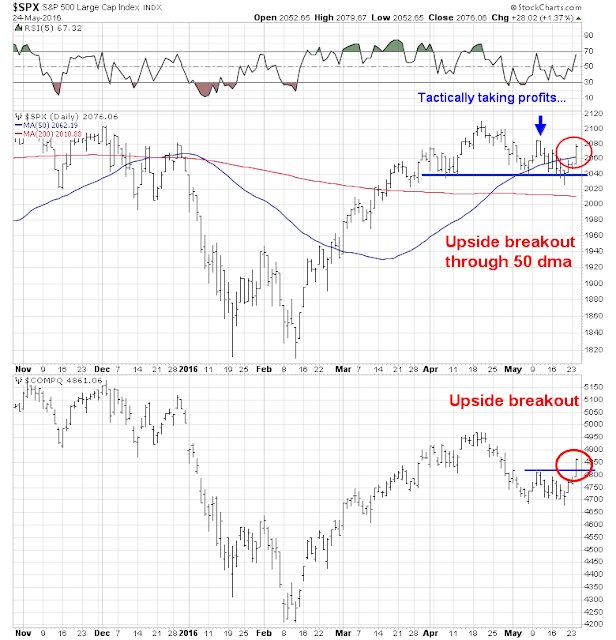 At the time of the bearish trading call, I said that I would turn bullish if:

Let’s consider what has happened since then.

The SPX has made a round-trip and rallied above its 50 day moving average (dma).  Despite all the global concerns over slowing growth in China, Brexit and Fed policy, the bears were never able to push the index down past 2040. These combination of a lack of bearish momentum and today`s recovery can be interpreted as the bulls seizing control of the tape.

Rob Hanna at Quantifiable Edges found a historical bullish pattern based on the recent consolidation action that suggests a positive bias going out to two weeks.

As well, the UK market rallied dramatically through both its 50 and 200 dma, which was likely a reaction to the latest polls showing that the Remain camp is gaining ground in the upcoming Brexit referendum. Regardless of the explanation, such exhibitions of positive momentum is bullish and indication of that possible relief rally is just starting.

Commodity prices have shown a mixed picture. On one hand, the CRB Index, which is more heavily weighted in energy, remains in an uptrend because of the strength in oil prices. 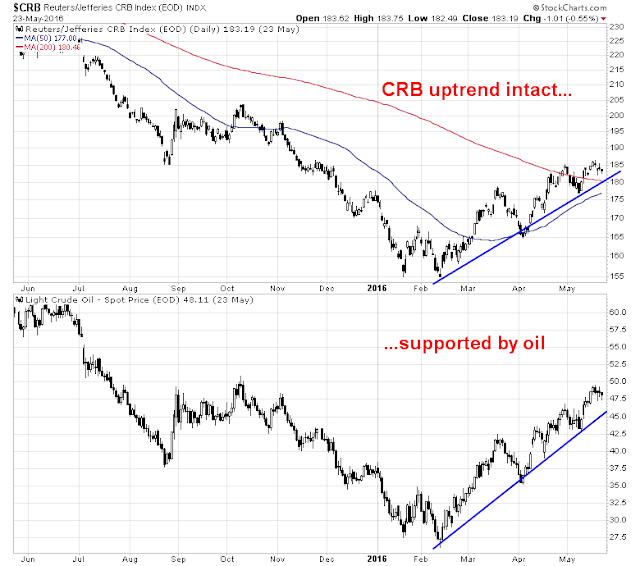 On the other hand, the cyclically sensitive industrial metals are still struggling:

Another positive cyclical development has been the dramatic rally in the semiconductor stocks, which staged a marginal upside breakout from resistance on an absolute (top panel) and relative (bottom panel) basis. While these stocks appear to be extended in the short term, their turnaround is a positive signal for the global growth outlook. 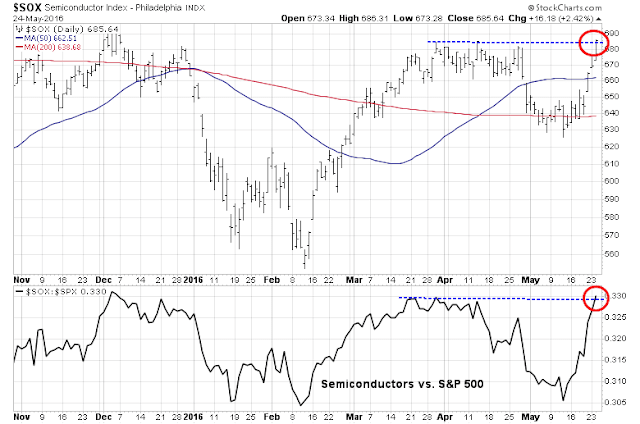 Despite these bullish developments, it would be difficult to declare that blue skies and clear sailing are ahead for the bulls. First and foremost, the market is signaling that problems with China are ongoing. The chart below of the stock markets of China’s major Asian trading partners have not turned up, with the exception of Australia, which is trading above its 50 dma, and Taiwan, whose sudden recovery is semiconductor related (see above). 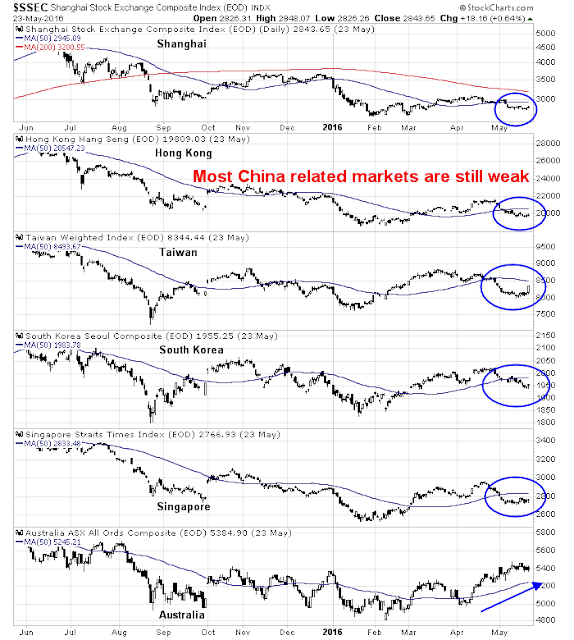 In addition, the USD strength is problematical for stock bulls. The USD is inversely correlated to commodity prices and it would difficult to see how both USD and commodity prices, which is an important barometer of global cyclicality, could rise at the same time. In addition, a strong USD will put downward pressure on the profit margins of US multi-nationals and therefore depress the earnings growth outlook.

As well, the yield curve is continuing to flatten (for further explanations see Three steps and a stumble? and Yield curve: Correlation vs. causation edition). A flattening yield curve could be interpreted as a signal of decelerating economic growth, which would be a worrisome sign.

The bear case getting less bad. This is mostly all about the Fed. The price action of the USD and the flattening yield curve can be explained by the sudden hawkish Fedspeak in the last couple of weeks after the dovish tone from the last FOMC statement. Tim Duy summarized the disagreement within the FOMC as a debate over whether the economy faces inflationary pressures from the employment picture, as the decline in the unemployment rate has stalled because the participation rate is rising again:

To me then, it appears that by raising rates now the Fed is risking falling short on its employment mandate at a time when the price mandate is also challenged. And falling short on the employment mandate now suggests an economy with sufficient slack to prevent reaching that price mandate. And that is without considering neither the balance of risks to the outlook nor the possibility that escaping the zero bound requires approaching the inflation target from above rather than below. Consequently, it seems that the case for a rate hike in June should be quite weak.

I would think that Federal Reserve Chair Janet Yellen should also find it quite weak. But the minutes of the April FOMC meeting and recent Fedspeak indicate that a large number of monetary policymakers find the case for a rate hike quite compelling. Given her past concerns regarding underemployment, I would have expected Yellen to lean stronger in the opposite direction. But I don’t know that she is in fact leaning against the logic driving a rate hike. I am hoping we learn as much via her upcoming speaking engagements.

Hopefully, we should get greater clarity about the direction of Fed policy when Janet Yellen speaks on June 6. My guess is that Yellen, who was trained as a labor economist, tilts towards the side of the doves and the Fed Policy Loop begins yet again. 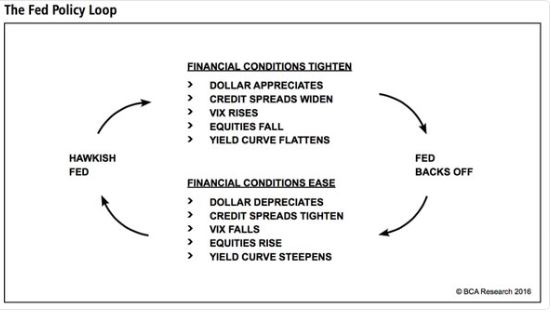 From my inner trader’s perspective, the improvement in tone in stock prices represents an unconfirmed signal of strength. Things are getting less bad – and that`s bullish. Should the market hold the breakout points (SPX 50 dma, FTSE 100 50 and 200 dma, etc.) tomorrow on a closing, he will cover his current short position and reverse to the long side. This brief correction is probably over.

3 thoughts on “The correction is (probably) over”