Further to my last post (see Three steps and a stumble?), I would like to clear up some misconceptions about how I interpret the yield curve and its investment implications. Much of the confusion revolves around the idea of correlation vs. causation. Yield curve inversions don’t cause anything. Yield curve inversions are a signal (correlation) of certain effects that have important investment implications.

In this post, I will address the following topics:

The yield curve and recessions

First of all, I do agree with New Deal Democrat that the yield curve is not signaling recession right now. As the chart of the 10-2 year Treasury yield shows, this spread has inverted (gone negative) before every one of the last five recessions, with no false positives. But the spread has been bouncing around 0.9-1.0% and therefore it is not forecasting a recession. 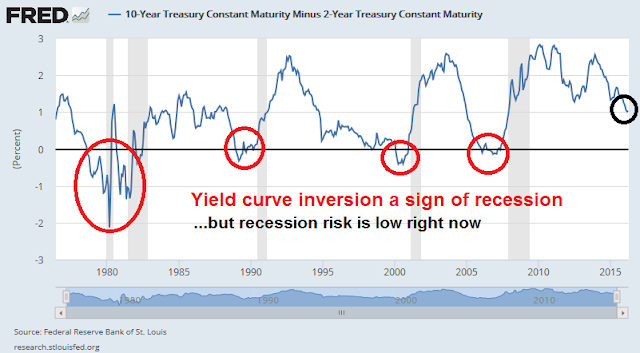 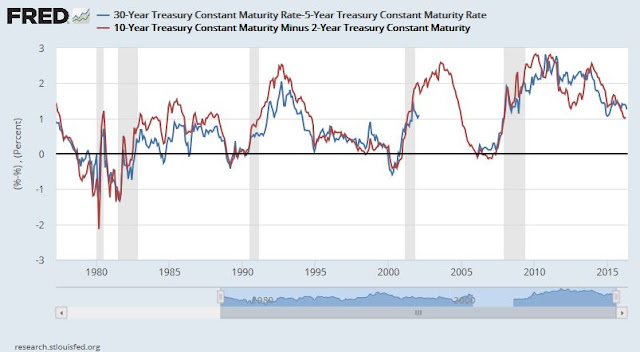 When will the yield curve actually invert and signal recession? I have no idea. Tim Duy thinks that the yield curve will continue to flatten because the Fed is in a tightening cycle:

So why is the curve flattening? My story is this: The yield curve flattens whenever the Fed is in a tightening cycle. And the Fed most assuredly remains in a tightening cycle. They have not backed off their fundamental story that rates are headed higher. They see normalized interest rates on the short end as well above the current yield on the long-end. This seems entirely inconsistent with signals from the bond market and the global zero interest rate environment. In my opinion, the Fed continues to send signal that they intend to error on the side of excessively tight monetary policy.

For the yield curve to steepen, the Fed needs to signal that it is more “relaxed” about rising inflation:

To expect the curve to steepen at this juncture, I think at a minimum you need the Fed to more aggressively commit to approaching the inflation target from above. You need to overshoot. That I think would be essentially an easing at this point. Chicago Federal Reserve President Charles Evans is already there. I think that Federal Reserve Chair Janet Yellen is getting there, but can’t say it.

The yield curve and credit conditions 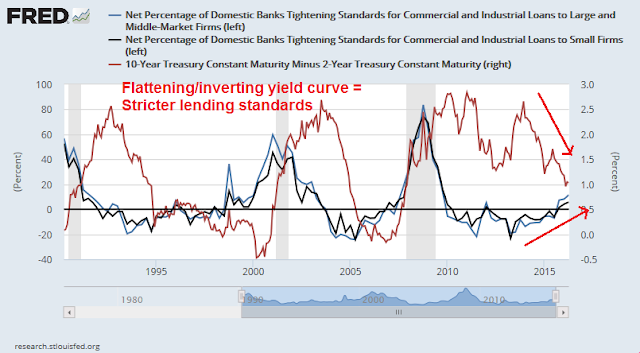 The yield curve and bear markets

Finally, some readers pointed to the analysis from Urban Carmel, which showed a loose connection between flattening yield curves and equity bear markets. 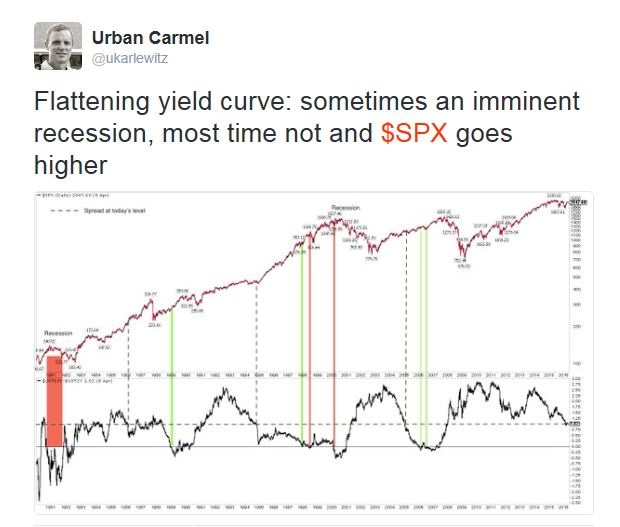 For a slightly different perspective, here is the 10-2 yield spread (blue line) against the Russell 1000 (red line). Yield curve inversions (blue circles) have signaled recessions in the past. The stock market has experienced bear markets in anticipation of recessions (red circles). Arguably, the NASDAQ top of 2000 and its subsequent crash had sufficient economic impact that it caused a recession. 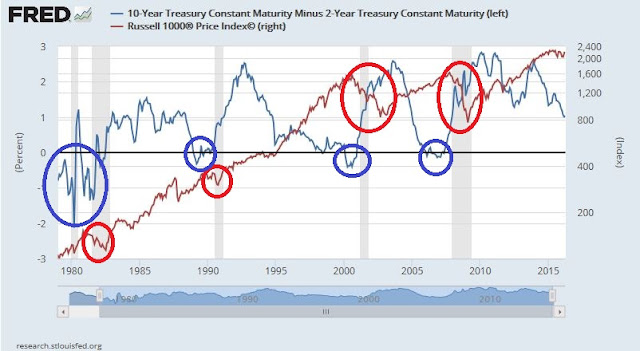 The two are related but inverted yield curves don’t cause bear markets, stocks go down in anticipation of recessions.In general, the macro-economic sequence goes something like this. The Fed tightens monetary policy, which causes the yield curve to flatten and eventually invert. The inversion is an indicator that monetary policy is so tight that a recession is more or less inevitable. The stock market reacts to the prospect of a slowing economy and recession and falls.

Got that? The shape of the yield curve is only a market indicator. It doesn’t “cause” anything to happen. Correlation does not equal causation.