*Sigh* Another growth scare – Humble Student of the Markets 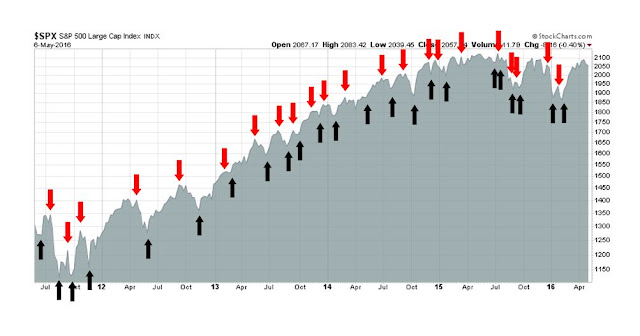 The stock market got another growth scare last week when it weakened last Tuesday, after a dismal set of PMI reports, and ended with a Non-Farm Payroll miss in the US Employment report. I was reminded of an article by Kurt Feuerman and James Tierney Jr. of AllianceBernstein entitled Don`t Confuse Price with Business Momentum:

Momentum is a funny thing. Share price momentum isn`t necessarily an indicator of business momentum. Sometimes a stock is falling simply because investors are taking profits after its outperformance or because a portfolio is changing its risk profile in a volatile market. There are countless reasons why share prices move.

Last year’s narrow market is a case in point. Investors might assume that the underperformance of a large swath of the U.S. stock market means that most companies are in bad shape. There is, however, another plausible interpretation: It could also mean that there are a lot of buying opportunities in undervalued companies, ones that have a much better business than is widely believed.

Oh PUH-LEEZ! How real does the latest growth scare look to you?

The latest update from New Deal democrat, who keeps an eye on high frequency economic releases, shows an economy that is recovering from the mild industrial recession in Q4 and Q1:

The has been a broad improvement to neutral or outright positive among a number of a variety of indicators in the last month or so. The negatives are reduced to rail, Harpex, and bank lending rates, with even staffing turning less negative – and staffing is coming up to an important negative inflection point from late last May.

A report from Gavyn Davies indicated that his nowcasts of global economic growth remains healthy. 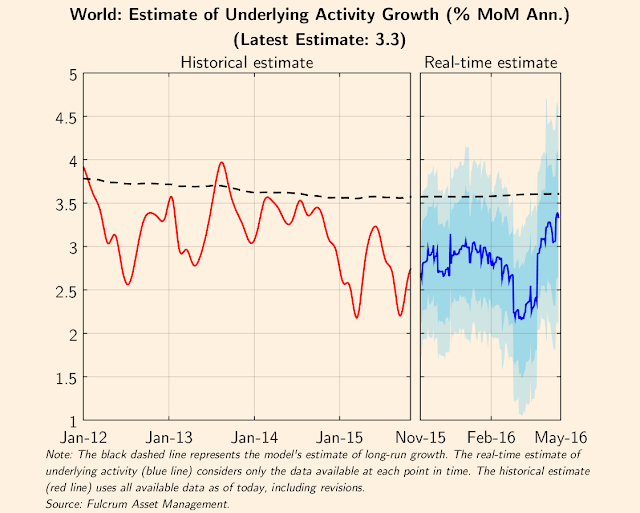 Davies went on to state that their nowcasts show that global growth is recovering, with Japan and UK being the weak spots:

In the last edition of our monthly report card on Fulcrum’s global nowcasts, we commented that economic activity had turned a corner in the US and China, but this was offset by continued weakness in several key economies, including Japan and the UK. A similar pattern is apparent in this month’s nowcasts. Global recession risks, which seemed elevated in January and February, have now receded, but the world economy is far from robust.

We therefore leave the overall verdict unchanged from last month: global activity growth is somewhat better, especially in the emerging economies, but it is still a long way from being satisfactory.

What about China, whose April PMI readings missed expectations and spooked markets?

In China, the recovery in the mini-cycle is alive and well, despite a slightly weaker PMI in April. A sharp easing in fiscal and monetary policy has resulted in an early rebound in activity, as it has done many times in the past. Activity growth is now well above the official target at 7.5 per cent, but this is based on a renewed rise in leverage in the public and private sectors, and a further delay in the rebalancing of the economy away from reliance on excessive investment spending.

In other words, China’s economy faces many challenges and things may not end well, but a hard landing is not imminent.

The work by ECRI, New Deal democrat and Gavyn Davies form a top-down perspective of the global economy. The bottom-up view from John Butters of Factset shows that forward 12-month EPS is still rising, which is another sign of positive fundamental momentum. With 71% of SPX companies reported, The Q2 Earnings Season interim report card shows that the EPS beat rate at 71%, well above its 5-year average, though the sales beat rate slipped to 53% from 55% last week (chart annotations and weekly changes in forward estimates are mine). 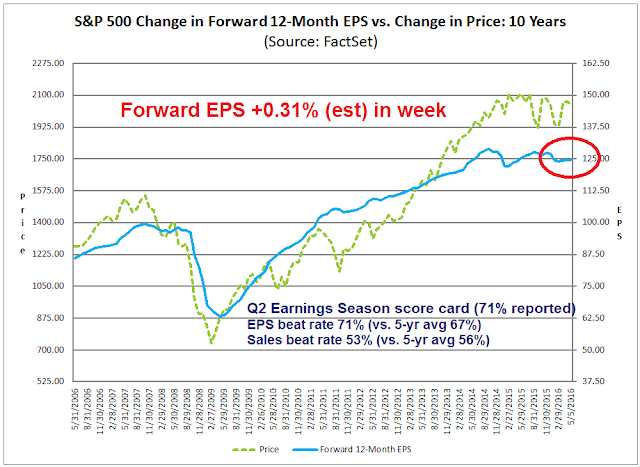 Another positive sign came in the form of corporate guidance. Bespoke pointed out that the difference between positive and negative company guidance recently turned positive (via Brian Gilmartin). While such a development may be interpreted bullishly as positive fundamental momentum, the downside is this just sets a higher bar for future EPS expectations. 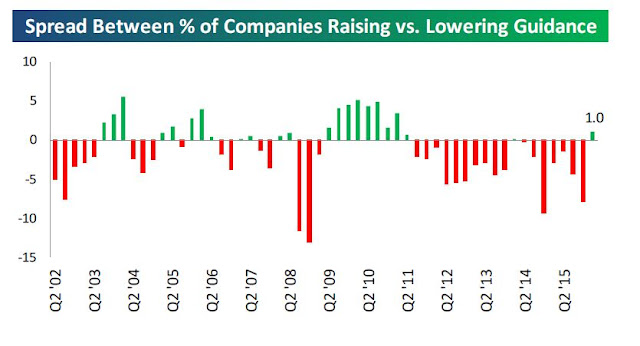 The article from AllianceBernstein adheres to a strictly fundamental viewpoint of equity analysis and totally ignores the technical element. There is certainly much to be said for using a multi-faceted approach to market analysis and I don’t discount the technical picture.

So what does the technical picture look like? Let`s consider the internals.

It is always instructive to see how the market reacts to good and bad news. Friday’s Employment Report of 160K jobs fell far short of expectations at 200K, though there were suggestions that the shortfall was weather related. The knee-jerk reaction of the bond market was to take any prospect of a June rate hike off the table.

For comparison purposes, just look at how far implied probabilities have evolved since May 2:

Even as short-term interest rates fell in response, I tweeted the unusual reaction of a steepening yield curve. Wait a minute! Why are short yields falling (a logical response to lower expectations of an immediate rate hike) but long rates rising (reflecting expectations of rising growth and inflation)? 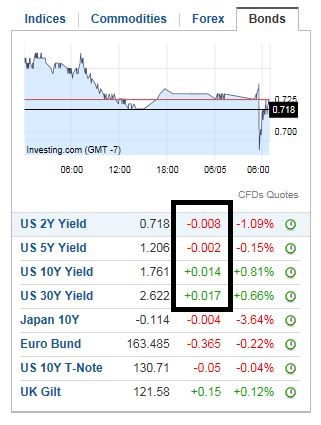 Here is a longer term chart of Treasury yields, the yield curve and the relative performance of deep cyclical sectors like the resource stocks. As the stock market weakened last week, yields fell, the yield curve flattened and cyclical stocks pulled back. On the other hand, the longer term trend of a steepening yield curve and resource stock market leadership remains intact, In short, Mr. Market is still expecting a growth rebound. 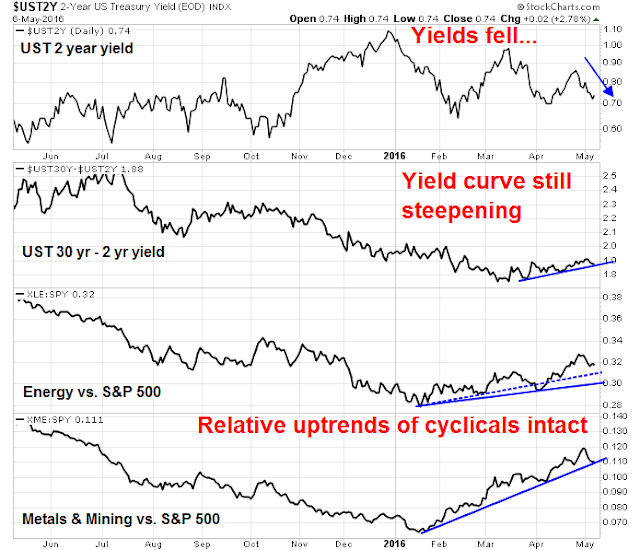 The message from market breadth is telling a similar story of a short-term setback in a longer term uptrend. The chart below shows various flavors of market breadth, namely the SPX Advance-Decline Line (an apples-to-apples analysis of breadth that dispels any discussion about the differences between the more conventional NYSE A-D Line and other indices), % bullish, % above the 50 day moving average (dma) and % above the 200 dma. 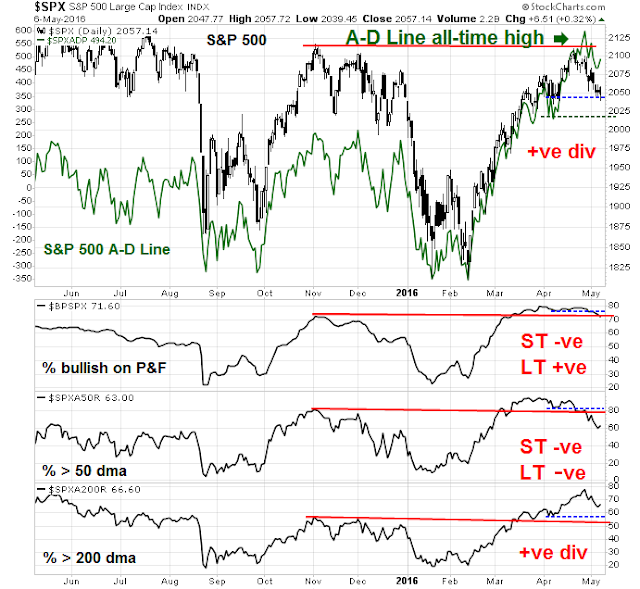 In summary, the longer term breadth indicators are holding above their November highs, but shorter term momentum (% above 50 dma) is weak. I interpret these readings as a correction or consolidation in a longer term uptrend.

Sentiment: A lack of bulls

I have been saying for weeks that sentiment models have been showing a lack of bulls, which is supportive of an intermediate term advance as it is unusual to see such muted sentiment after the rally off the February bottom. Readings this week continue to be neutral to slightly bearish (contrarian bullish). As the chart below shows, Rydex and AAII sentiment surveys remain in neutral, though bullish sentiment has retreated a bit. NAAIM exposure, which measures RIA sentiment, has been the most bullish of the bunch but pulled back last week. 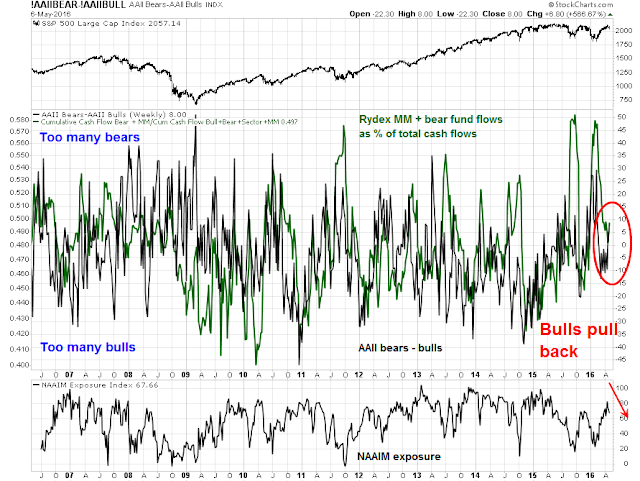 The chart below depicts the 10 day exponential moving average of the CBOE equity only put/call ratio. With the exception of the market downdraft last November, readings at past current levels have seen limited downside risk. 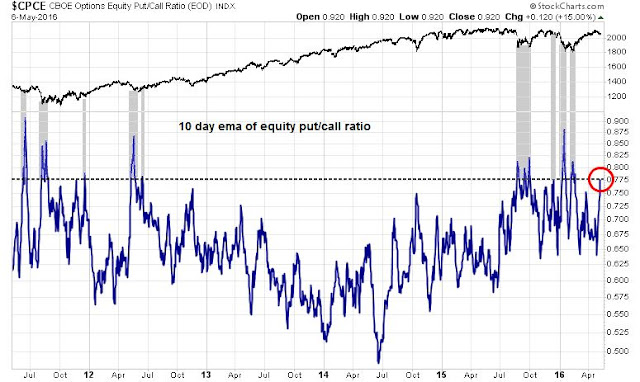 In addition, Mark Hulbert pointed out that NASDAQ timers are throwing the towel, which is also contrarian bullish. However, NASDAQ timer sentiment has not fallen to capitulation levels, which may indicate further near-term choppiness ahead. 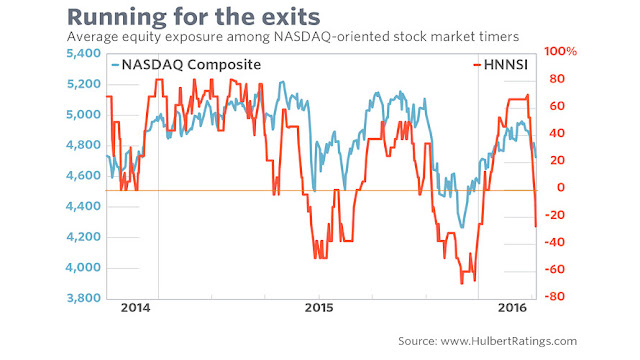 In my last mid-week market update, I highlighted seasonality analysis from Rob Hanna indicating that the days following the first day of May tended to be weak and the historical pattern suggested that the market would bottom out Friday (see What’s the pain trade?). That script has been largely correct as the market made a closing low Thursday and recovered Friday, though it is unclear whether that will be a durable low.

My base case scenario continues to be a market experiencing a corrective episode in an intermediate term uptrend. The SPX topped out on April 20 at 2102 and has retreated about 2.5%. The pullback has been relatively shallow and the bears were showing signs of exhaustion late last week.

I tweeted the following chart last Thursday, indicating that the market was starting to see oversold conditions, in the form of the VIX Index testing its upper Bollinger Band, and nearby SPX support at the 50 dma at around 2040. Just get oversold, test support and get it over with! 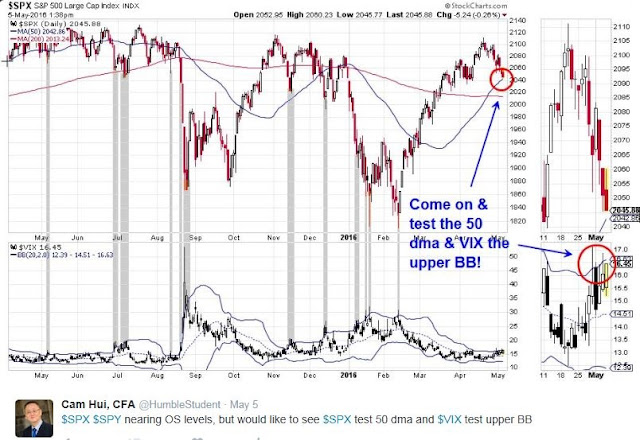 This chart from IndexIndicators shows that stocks may be about to undergo an oversold rebound. 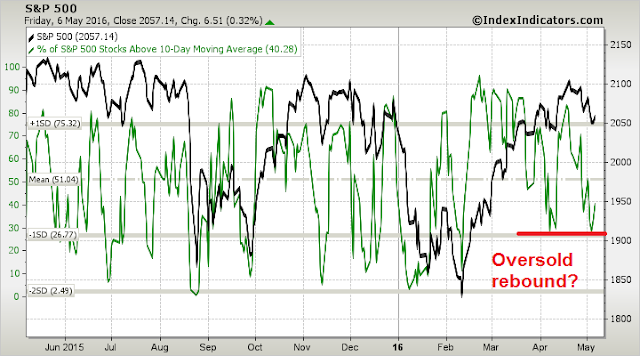 Life (and trading) is never that easy. One of the key tests will come next week, as any rally will define the relative strength of the bulls and the bears. If the bears are truly exhausted, we will see a V-shaped recovery to test the old highs. If the growth scare continues, we may see a up-and-down trading range for the next few weeks. With readings looking oversold, downside risk is likely to be low from current levels, but the market may need a final flush and capitulation before the current corrective episode is over.

The hourly SPX chart shows a falling trend line with resistance at 2075-2080. While this scenario is highly speculative, a head and shoulders pattern may be forming and a bear case would see the market break support with a measured downside target of 1970-1980, but a good chartist knows that these formations are not confirmed until the neckline shows a definitive break. 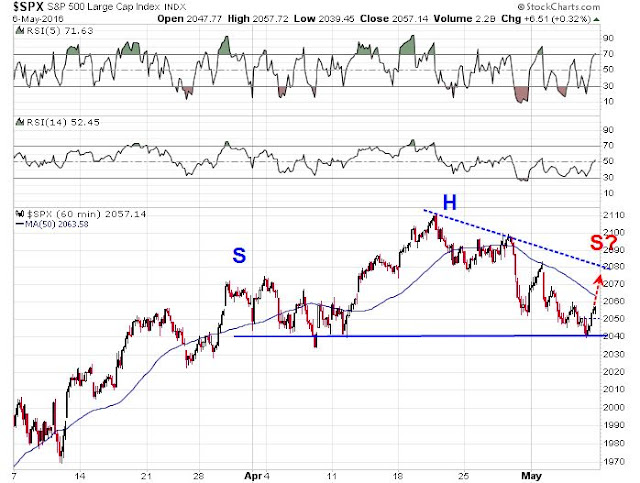 My inner investor remains bullish, with an overweight position in the resource stocks. He is getting ready to buy should the growth scare get worse.

My inner trader is also long equities, with a stop loss just under the 50 dma (on a closing basis). He has an open mind and he is watching the character of the market should it rebound next week.

1 thought on “*Sigh* Another growth scare”