All aboard the reflation train, but beware of derailments – Humble Student of the Markets 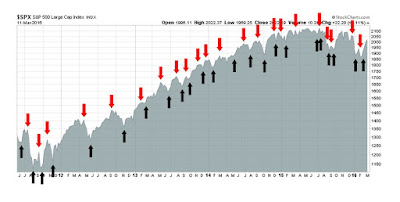 Just as I started to write about the late cycle and reflation trade theme last week (see RIP Correction. Reflationary resurrection next?), it seemed that the whole world was rushing to jump on this bandwagon. These conditions suggest that my thesis of late cycle sector leadership of capital goods and resource extraction industries should have some legs as the Street’s stampede is just starting. Before rushing to hop a ride on the Reflation Express, though, I would caution that a couple of risks lie ahead. In the short run, the advance appears extended and vulnerable to a pullback. As well, the FOMC meeting next week could be a source of significant market volatility.

Let’s begin with the macro big picture. The American economy is showing definite signs that it is moving into the late cycle of its expansions phase, characterized by tight capacity utilization, low unemployment and rising inflation. New Deal Democrat wrote a two part series (links to Part 1 and Part 2) pointing out that many of the mid-cycle indicators that he watches have peaked, though immediate recession risk is low:

So let’s summarize: of the 7 mid cycle indicators, 5 have probably peaked: 2 of the 3 consumption metrics, plus YoY employment, capital formation, and consumer sentiment. One – the real personal savings rate – is equivocal, and only 1 – spending on durable vs. nondurable goods – has not triggered.

Barring a big surprise, we are past mid-cycle, which most turning at roughly year-end 2014. That isn’t meant to be a precise 50% marker, as in the past these in the aggregate have turned sometime in the middle 1/3 of the expansion. In other words, it is time to focus on the long and short indicators of approaching recession, although the chances are relatively slim that it happens before 2017.

In his weekly monitor of high frequency economic data, he concluded that the US industrial economy is starting to turn up after its recent soft patch:

Once again the bifurcation of decent consumer economy, poor industrial economy (at least that portion tied to commodity extraction and exports) that began one year ago, is changing — and generally for the better, as commodity production and transportation look like they have turned positive. The recent weakness in real money supply appears to have ended. The dollar is becoming less of a drag. The only new negative is the continued deterioration in tax withholding.

Gavyn Davies observed that their models are showing signs of rising inflationary pressures:

Fulcrum’s inflation forecasting models (BVAR models that include price inflation, the exchange rate and oil prices) do suggest that the inflation process may have firmed up lately. The graphs below show that headline inflation will start to rise soon, and that core inflation will be hovering around 2 per cent by year end. These forecasts are a bit above the FOMC’s predictions that were published in December, so it is possible that the Fed’s inflation path could be slightly firmer when it appears with the March 15/16 FOMC meeting.

David Rosenberg came to a similar conclusion about the reflation theme (via Value Walk):

Gluskin Sheff Chief Economist David Rosenberg is bucking the bearish trend on Wall Street and running with the bulls instead, touting positive jobs and wages data as a sign that inflation—the current gold standard for economic recovery—may be right around the corner.

He noted that the Fed’s latest Beige Book indicated that wage pressures are escalating, which of course is good news for the economy. Oil prices might also be on the path to recovery as investors have been rewarding major oil giants for cutting their capital expenditures plans for this year.

Mr. Market takes a ride on the Reflation Express

The markets have also pivoted towards a reflationary paradigm for the global economy. As recessionary fears faded in the past few weeks, equities rallied in a coordinated fashion around the world. The chart below shows that US stocks, as measured by the SPX, staged an upside breakout through its 50 day moving average (dma) and regained its 200 dma level on Friday. European stocks, as measured by the Euro STOXX 50 and the FTSE 100, also rose above their 50 dma. 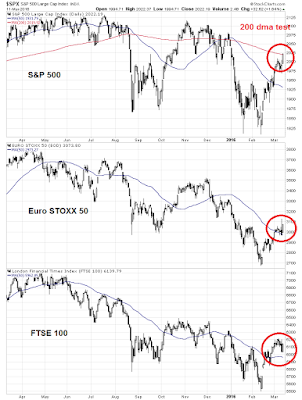 Reflationary gains are not limited to the US and Europe. The regional markets of China’s trading partners have all regained their 50 dma levels, with the exception of the Shanghai index:

The late cycle leadership theme was evident at a sector level as well. The chart below shows the USD Index (top panel), which is inversely correlated to commodity prices and the relative market performance of the energy and metals and mining stocks. The USD is weakening, while both of the resource extraction groups pictured have rallied out of relative downtrends, which is bullish. In addition, a soft USD should be supportive of better earnings growth of global multi-nationals. 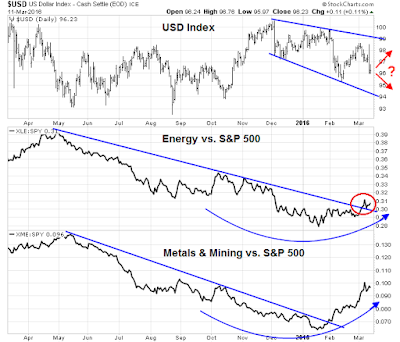 Sentiment models indicate that stock prices are poised for further gains. While some sentiment readings have moved from crowded short to neutral, the more important funds flow metrics (where people are actually putting actual money on the line) are still showing healthy signs of skepticism about the latest stock market rally. Josh Brown indicated that the latest RiskAnalyze report showed that advisors had gone risk-on, but only in the bond market. In equities, they pulled money out of the US and put it to work in defensive international stocks:

Winners (advisor flows TO these investments increased substantially):
Losers (advisor flows FROM these investments increased substantially):
Further, Dana Lyons noticed that the ISE equity-only call/put ratio had been under 100% for four days running last week, which is a historically low reading indicating excessive put buying. Similar conditions in the past have been followed by stronger stock prices. 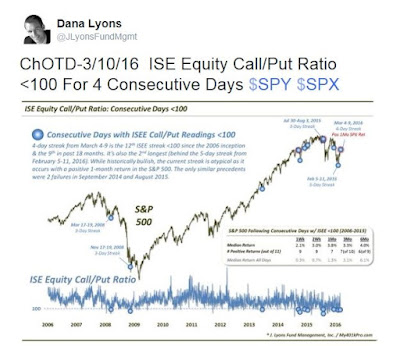 The latest NAAIM survey of RIAs also reflect a healthy dose of skepticism. Bullishness actually ticked down slightly during the week even as the market advanced. 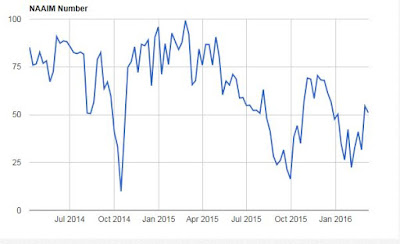 While the aforementioned skeptical readings are contrarian bullish, the behavior of the “smart money” insiders is constructive. Barron’s reports that insiders have been steadily buying since November:

The week ahead: The FOMC wildcard

The one actor that could derail the current market rally and stop late-cycle sector strength in its tracks is the FOMC, which is meeting next week. Jon Hilsenrath reported last week that the Fed is unlikely to raise interest rates at next week’s meeting, though the April and June meetings are “live”:

Federal Reserve officials are likely to hold short-term interest rates steady at their policy meeting next week and leave open-ended when they’ll next raise rates given their uncertainties about markets and global growth.

For Fed Chairwoman Janet Yellen, that likely means crafting a message that gives the central bank flexibility to lift rates in April or June should the economy perform well in the weeks ahead, without committing to a move in case economic data disappoint or new market turmoil erupts.

Fed watcher Tim Duy thought that an interest pause is more a less a foregone conclusion. The bigger issue is whether the post-meeting statement is likely to be dovish, neutral or hawkish. Duy believes that Yellen would stay dovish for now, but that`s only an educated guess:

Where does Yellen stand? My sense is that six month ago Yellen’s position would align close to Fischer. But I think she would now find Brainard’s position more persuasive, especially with Dudley’s support. That suggests that the Yellen will work to pull the Fed toward a neutral/dovish statement.

Bottom Line: Fed will hold steady next week. Key FOMC participants are shifting in a dovish direction. The financial market volatility, which induced clear tightening in financial conditions, bolstered the Brainard’s arguments. Despite solid incoming data, the Fed will find it necessary to tread cautiously in the months ahead.

Whatever the Fed does next week, it will likely cause a minor earthquake in the financial markets. If the message is dovish, equities are likely to spike upwards, along with commodity prices as the USD dives. A hawkish tilt would reverse some of the gains seen in stocks and late cycle sectors.

Technically, stock prices appear to be overextended as the SPX tests its 200 dma. The CNN Money Fear and Greed Index shows a greedy reading equal to the level reached last October, though this index has risen further in the past. 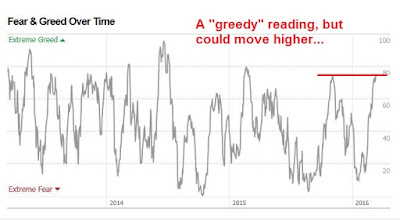 Breadth readings from IndexIndicators shows that the market is very overbought and vulnerable to a setback. 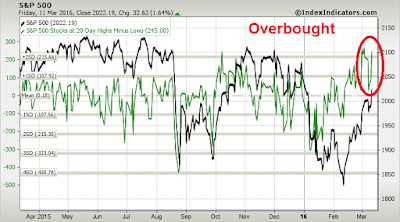 My inner investor had been accumulating equities on weakness, with an overweight position in resource extraction industries. He is standing pat with his positions.

My inner trader got stopped out of his long equity position by the market weakness on Thursday. He is staying in cash until the FOMC meeting next week. Despite the bullish intermediate term tailwinds that he is seeing for stock prices, he doesn’t believe the risk/reward ratio is favorable enough to play a event-driven market with a binary outcome like a FOMC meeting. At times like these, discretion is the better part of valor.

6 thoughts on “All aboard the reflation train, but beware of derailments”