IMF Managing Director Kristalina Georgieva recently said in a CBS Face the Nation interview that the IMF expects “one third of the world economy to be in recession”. She went on to outline the differing outlooks for the three major trading blocs in the world, the US, EU, and China, plus emerging market economies.

For most of the world economy, this is going to be a tough year, tougher than the year we leave behind. Why? Because the three big economies, U.S., E.U., China, are all slowing down simultaneously. The US is most resilient. The U.S. may avoid recession. We see the labor market remaining quite strong. This is, however, mixed blessing because if the labor market is very strong, the Fed may have to keep interest rates tighter for- for longer to bring inflation down. The E.U. very severely hit by the war in Ukraine. Half of the European Union will be in recession next year. China is going to slow down this year further. Next year will be a tough year for China. And that translates into negative trends globally. When we look at the emerging markets in developing economies, there, the picture is even direr. Why? Because on top of everything else, they get hit by high interest rates and by the appreciation of the dollar. For those economies that have high level of that, this is a devastation.

That said, the stock market isn’t the economy and looks forward past the IMF forecast, which is very similar to the consensus view of the global economy. From a relative performance viewpoint, US equities have skidded badly in the last two months, while European equities have soared. While the Chinese and Japanese Asian markets have staged relative rebounds in the same time frame, they remain range bound on a relative basis, and so does EM ex-China. 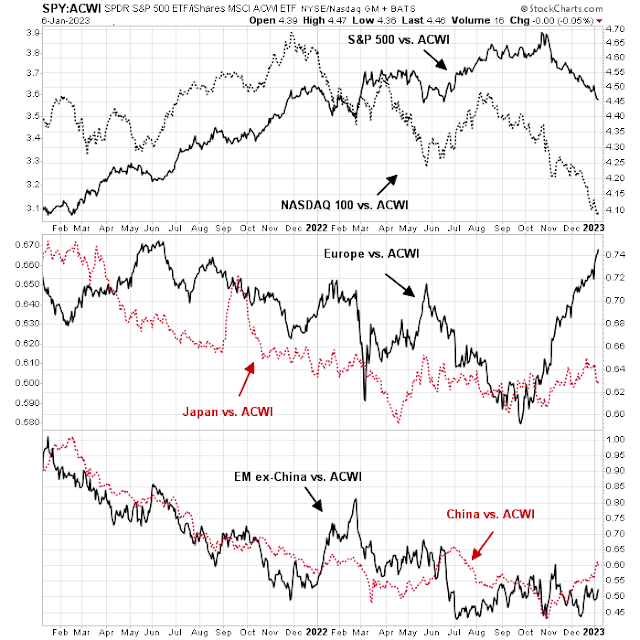 As investors bade goodbye to 2022 and look to 2023, here are some key questions to consider:

I have highlighted the equity recovery in Europe before and it’s continuing. When the Russo-Ukraine war began, an energy shock hit Europe and cratered many industries sensitive to energy inputs but many have rebounded. As an example, both BASF and Dow Chemical are commodity chemical producers and their share prices have tracked each other closely. The BASF/Dow pair fell dramatically in February 2022 when Russia invaded Ukraine. The pair then based and staged an upside breaking in September and has been gaining ever since, indicating a relative recovery in European chemical competitiveness. 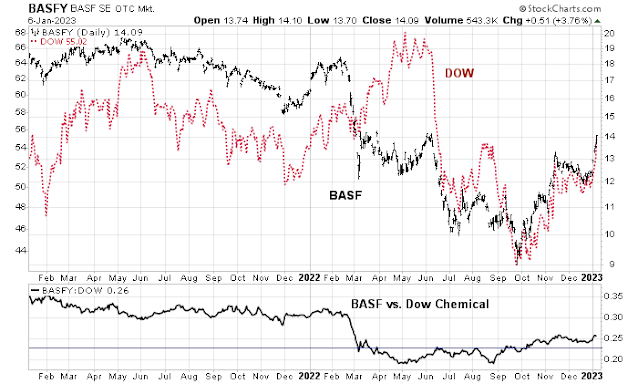 MSCI Poland can be thought of as a measure of geopolitical risk. Poland had been in a relative downtrend for most of 2022, but staged upside relative breakouts in late October and it hasn’t looked back since. 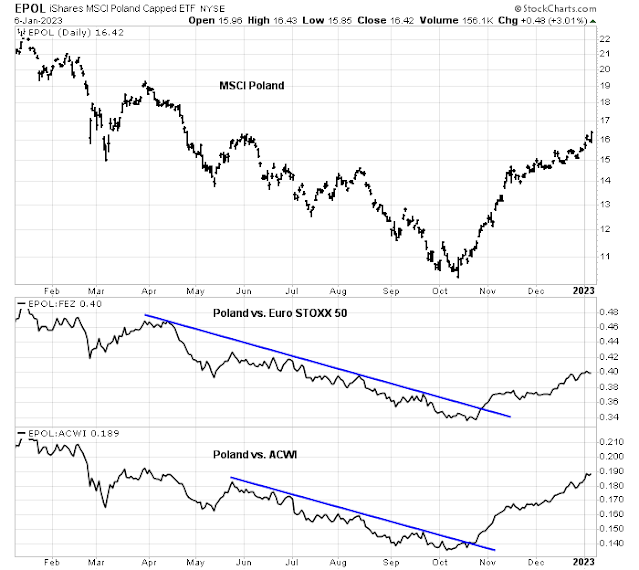 The question is whether Europe can continue to provide global leadership. In the short run, Europe has undergone a heat wave. It was 17C (63 F) when I left Berlin on New Year’s Eve at the end of my vacation and it reached 19C (66 F) on New Year’s Day. The heat wave has cratered energy prices and neutered Russia’s energy economic weapon. Gas storage levels are high by historical standards, but can the bullish backdrop continue? 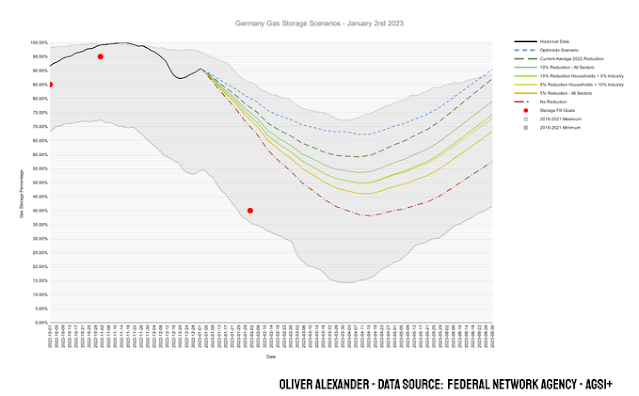 In addition, the IMF has argued that if Europe properly supports the flood of Ukrainian refugees, it could enjoy a refugee dividend by boosting Europe’s economic growth and tax revenue while helping some countries facing labor shortages. 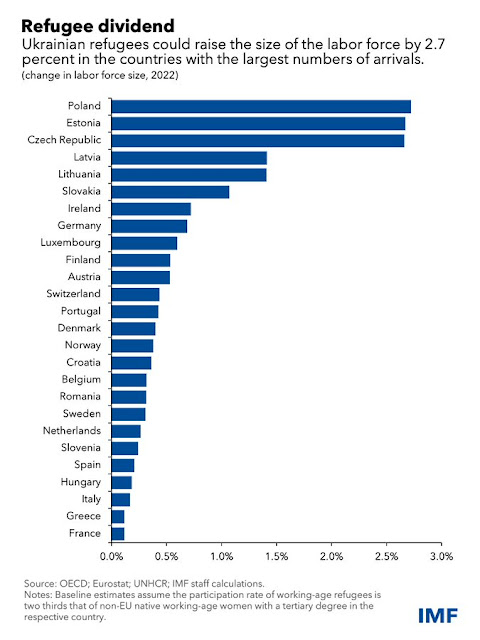 Europe’s Economic Surprise Index, which measures whether economic releases are beating or missing expectations, has been steadily climbing. In short, Europe is enjoying an economic tailwind. Can it continue? 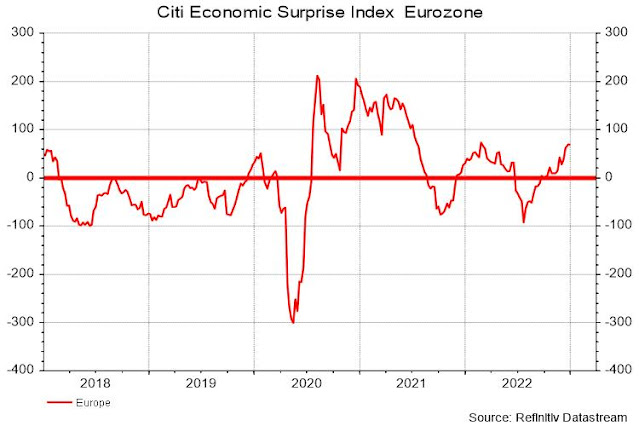 Tactically, the relative performance of eurozone equities appears to be inversely correlated to energy prices. Equally disconcerting is the lack of small cap leadership in Europe. If European equities are truly assuming a global leadership role, small caps should also be leading as a sign of cyclical recovery in the region. While European equity leadership should be viewed positively, investors seeking exposure to this region may wish to wait for a cold snap and energy prices to spike so they can buy in at more attractive levels. China rips off the COVID Band-Aid

China is reopening after abandoning its zero COVID policy. Calibrating the reopening trade is of utmost importance, not only for Asian investors, but also for global investors. A successful reopening has the potential to boost commodity prices and put upward pressure on inflation, which affects Fed policy.
Here are the bull and bear cases. Despite widespread reports of surging cases, overwhelmed hospitals and crematoriums, Bloomberg reported that “nearly a dozen major Chinese cities are reporting a recovery in subway use, a sign that an ‘exit wave’ of COVID infections may have peaked in some urban areas”, which is an indication that the COVID wave may be peaking. The WSJ echoed a similar analysis.

But the prospect of a large number of cases in January—a time of year when business activity is disrupted anyway, by the Lunar New Year holiday—has many in the manufacturing and service sectors optimistic that normalcy could come as soon as the beginning of February.
“It sounds strange, I think it’s rather helpful than harmful,” said Andreas Nagel, Shanghai-based chief commercial officer at Stulz, a maker of climate-control equipment that was hit in December by a wave of Covid absenteeism. “We have a real chance of getting back to normal after Chinese New Year.”

On the other hand, China’s December manufacturing and services PMIs were all weak, indicating economic contraction. 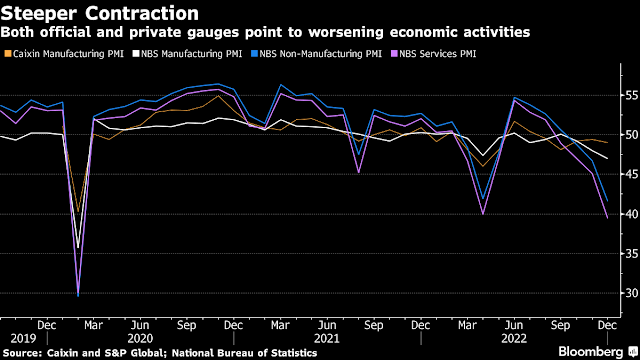 Bloomberg reported that China Beige Book, a provider of independent data, estimates the economy only grew 2% in 2022, which is similar with Fathom’s estimate of 1.4% growth. 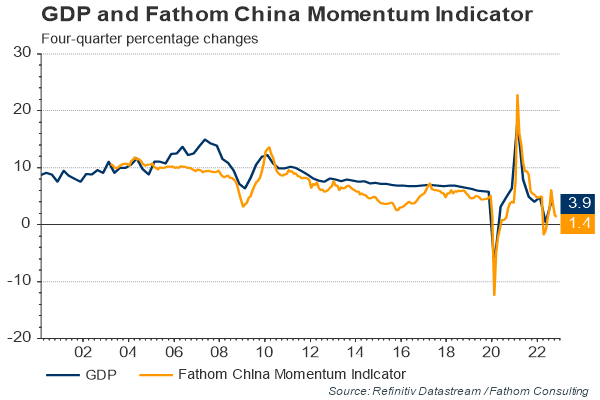 Marketwatch reported that Shehzad Qazi of China Beige Book sounded a guarded tone of optimism and left the door open for a reopening risk-on episode in the coming weeks.

While the sector is suffering a record contraction, with every subsector from housing to commercial property in distress, new credit data offers a glimmer of hope, said Shehzad Qazi, managing director of consultancy China Beige Book.
“Borrowing and bond sales are picking up, which suggests the much talked about policy turn may finally be approaching,” he said in an emailed statement.
“But forget a return to days of old: It will take considerable policy support in 2023 just to pull property out of the gutter.”

What does the market think of the reopening trade? Here the jury is still out on that score. A glance at the relative performance of the equity markets shows a V-shaped rebound in a number of regional markets, but the relative trend is still sideways. 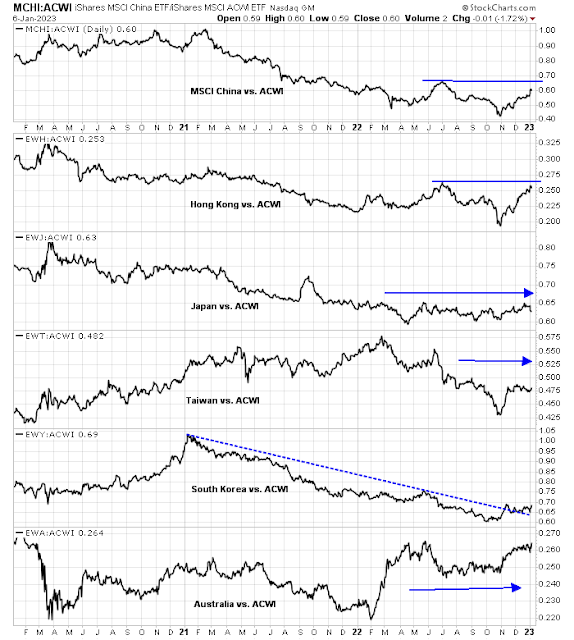 Commodity markets are also not showing much sign of life. If the Chinese economy is truly rebounding, commodities should be rallying and not trading sideways. In particular, the cyclically sensitive copper/gold and base metals/gold ratios are flat to down. 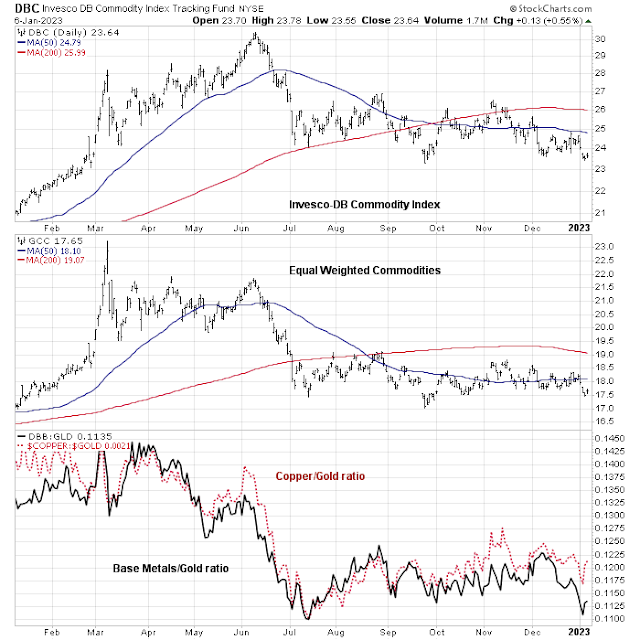 These readings are consistent with China’s Economic Surprise Index, which has been skidding but may be trying to find a bottom. 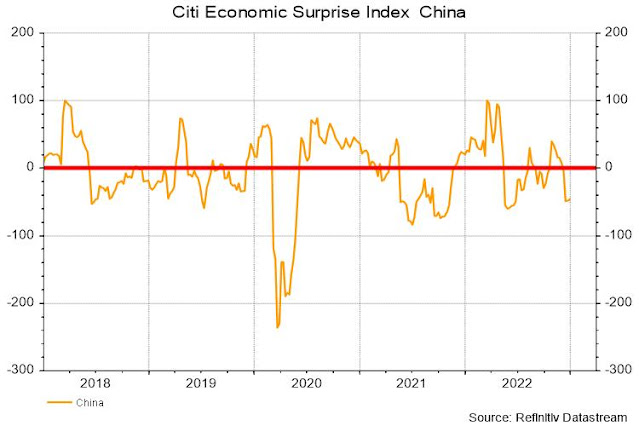 The stars may be aligning for a China reopening risk-on episode in the near future, which has the tactical potential for short-term profits. However, keep in mind that reopening the economy does not address China’s property bubble debt imbalances. Until that problem is credibly addressed, the Chinese economy can only experience stop-and-start growth spurts. 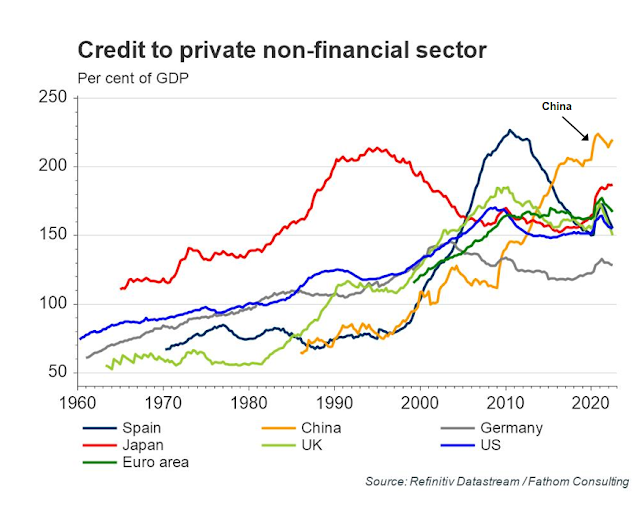 US: Who is wrong, the stock or bond market?

As US investors bid good riddance to 2022 and look to 2023, a chasm in perception is appearing between the stock and bond markets. The S&P 500 is trading at a forward P/E of 16.7, which is elevated by historical standards when compared to the 10-year Treasury yield. Historically, past periods of similar yields have seen S&P 500 forward P/E ratios at slightly lower levels, though mid and small-cap stocks are more attractive. In addition, the 10-year yield has started to retreat, which is the bond market’s signal of a weakening economy. 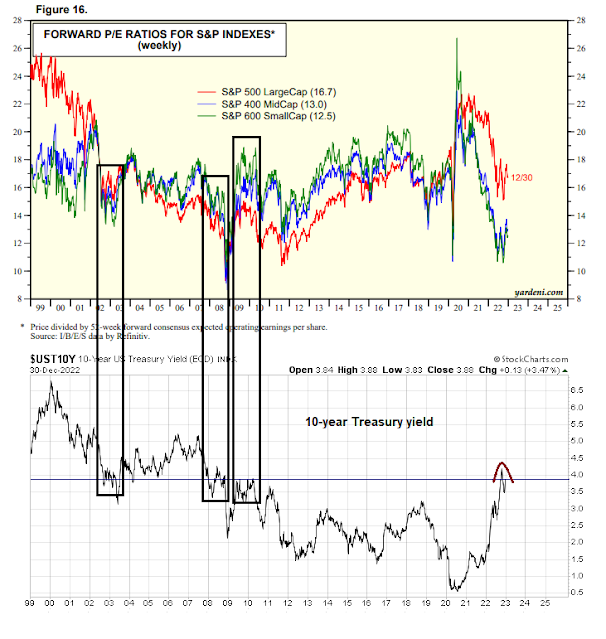 In effect, the elevated forward P/E of 16.7 is discounting a soft landing and no recession. The WSJ surveyed large investment banks for their 2023 forecasts and found only five of 23 professional economists expect no recession this year and next: Credit Suisse, Goldman Sachs, HSBC, JPMorgan Chase and Morgan Stanley. Why is the S&P 500 so richly valued?

By contrast, the 30-year Treasury yield peaked in October and past peaks have either led or coincident with peaks in the Fed Funds rate. The timing record of such peaks for stock prices, however, is mixed. 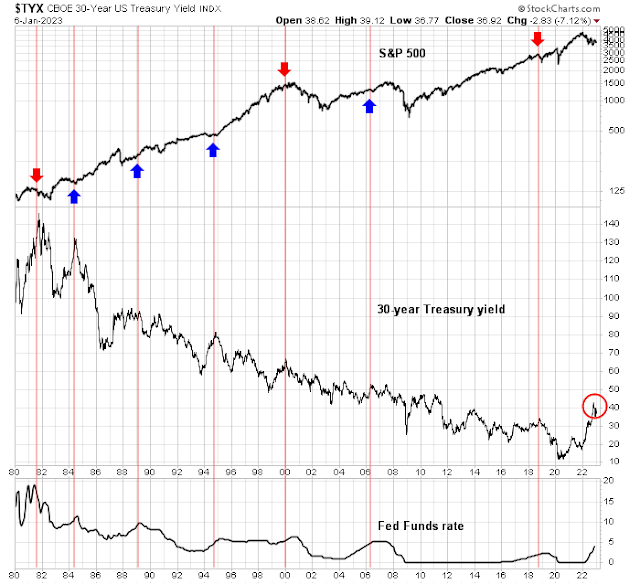 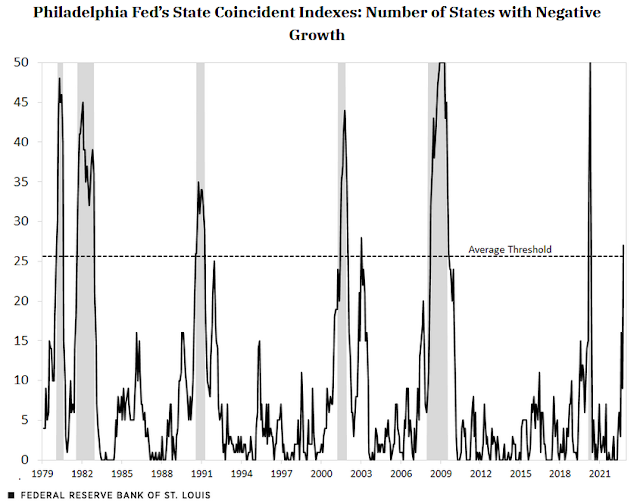 If there is a recession, history shows that recessionary equity bears don’t bottom until the economy is actually in recession, though the recession may not be officially declared. Currently, the Atlanta Fed’s Q4 GDPNow estimate is 3.8%, which is hardly a recessionary condition. If history is any guide, the ultimate market bottom is still ahead.

Can the Fed rescue the stock market? Don’t count on it. Supply chain bottlenecks have normalized and goods inflation is receding. The Fed’s focus has shifted from goods inflation to employment and wage growth as the key services inflation metrics to watch. 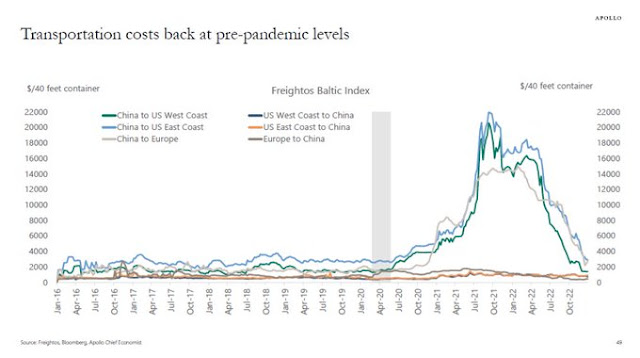 What equity bulls don’t recognize is the Fed won’t pivot until unemployment is strongly rising. Unemployment won’t rise until a meaningful credit squeeze, at which point households won’t respond to stimulus. That’s what a recession looks like. The US economy is nowhere near that point.

I am not overly fond of market analogs, but this analysis from Nautilus Research makes sense. The US market probably has at least one more leg down, driven by a realization of recession and earnings downgrades before the bear market is over. 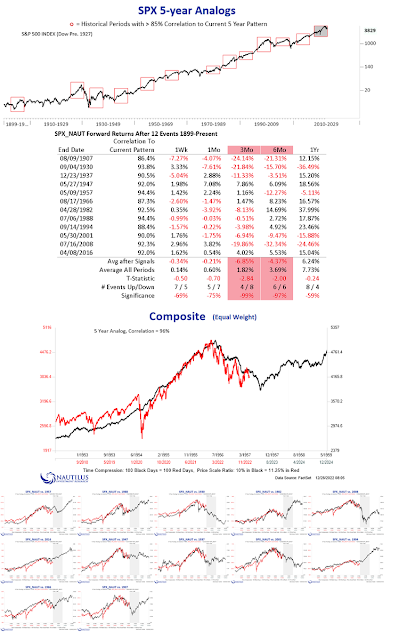 In conclusion, the equity outlooks for the three major regions are diverging. Europe stocks are the leadership, but investors need to recognize that the leadership is sensitive to weather and energy prices. China may be undergoing a reopening rally, but a sustained advance is in doubt and a successful reopening would have significant disruptive effects on commodity prices and the global inflation outlook. The US stock market faces valuation headwinds, a deteriorating earnings outlook, and a Federal Reserve that’s determined to suppress asset prices as a way to fight inflation. As well, the latest political drama over the speakership in the House of Representatives more or less guarantees another 2011 style impasse over the debt ceiling later this year.

1 thought on “Three questions investors need to ask in 2023”