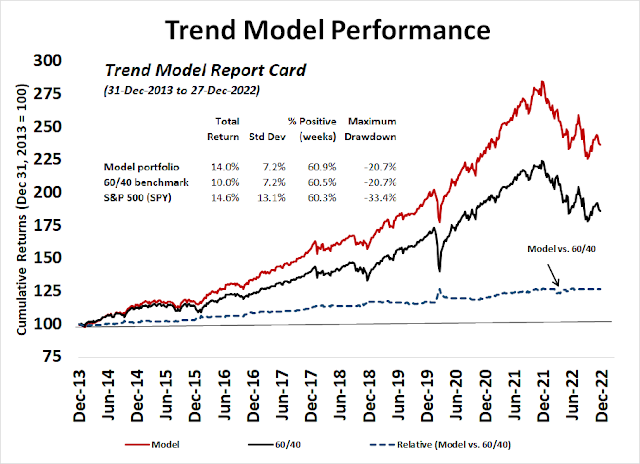 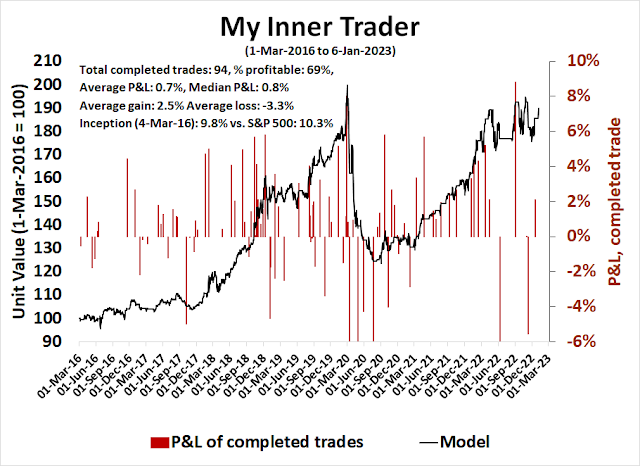 Update schedule: I generally update model readings on my site on weekends. I am also on Twitter at @humblestudent and on Mastodon at @humblestudent@toot.community. Subscribers receive real-time alerts of trading model changes, and a hypothetical trading record of those email alerts is shown here.

Subscribers can access the latest signal in real time here.

Waiting for clarity from earnings season

As the New Year dawns on investors, fresh concerns are bubbling up for the US equity outlook. The most immediate is the approaching Q4 earnings season reports, which begins in earnest when the banks report earnings this coming Friday. Already, forward 12-month EPS are rolling over across the board for large, mid, and small-cap stocks. Upcoming corporate guidance will determine the degree of valuation pressure stocks will face in the coming weeks and months. 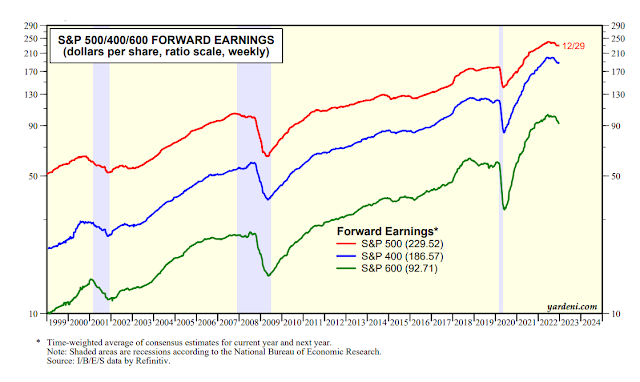 A top-down macro analysis indicates growing margin pressures. A yawning gap has appeared between corporate profits as a percentage of GDP (blue line) and annual changes in average hourly earnings (red line, inverted scale). While these pressures are long-term, slowing economic growth in 2023 could be the catalyst for a collapse in corporate margins.

For now, margins don’t look like they’re in any imminent danger of a collapse. FactSet reported that the level of negative guidance for Q4 is elevated, but readings aren’t excessively high. 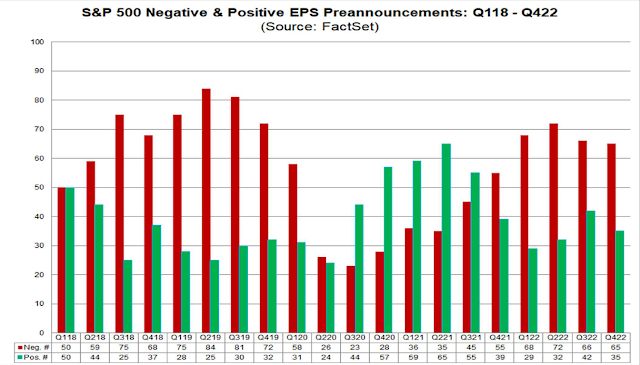 Earnings season could hold the key to the short-term direction of stock prices. I am not optimistic. As another sign of fundamental weakness, the WSJ reported that corporate insiders have not been buying despite the market’s recent weakness. 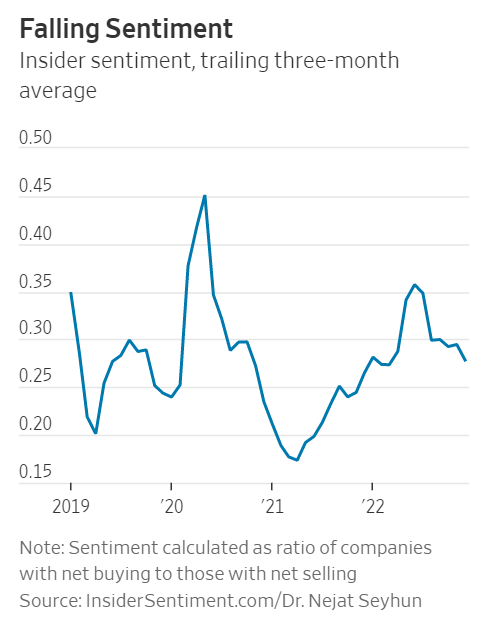 The release of the December FOMC minutes did equity investors no favors. Fed officials affirmed their resolve to fight inflation

Several participants commented that the medians of participants’ assessments for the appropriate path of the federal funds rate in the summary of economic projections, which tracked notably above market-based measures of policy-rate expectations, underscored the committee’s strong commitment to returning inflation to its two per cent goal

More importantly, it telegraphed that it wants lower asset prices as a way of tightening financial conditions. If financial markets adopt a risk-on tone, the Fed will have to tighten further to counteract the loosening effects.

Participants noted that, because monetary policy worked importantly through financial markets, an unwarranted easing in financial conditions, especially if driven by a misperception by the public of the committee’s reaction function, would complicate the committee’s effort to restore price stability.

Financial conditions have begun to tighten again after loosening, but readings are far from extreme. The Fed has more work to do.

The IMF’s First Deputy Managing Director Gita Gopinath voiced support for the Fed’s tight monetary policy stance in a FT interview. She said that the Fed was correct to emphasize it would “maintain restrictive monetary policy” until there was a “very definite, durable decline in inflation” that was evident in wages and sectors not related to food or energy. She went on to echo the Fed’s concerns over the resilience of the labor market as a source service sector inflation.
So long, Fed Put.

These conditions are setting up for a final flush in stock prices. Dean Christians at SentimenTrader observed that the percentage of sub-industry groups with a positive one-year return fell to a low of 17% in 2022, but average bear market bottoms occur at a reading of 12%. 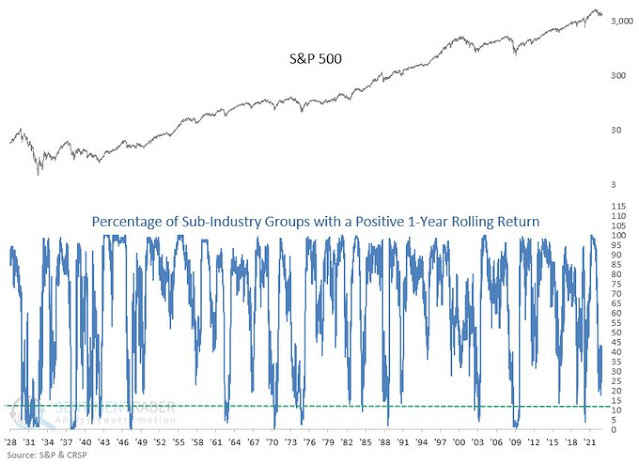 From a technical perspective, watch for the S&P 500 to decline while the NYSE Summation Index to either reach another oversold extreme, or exhibit a positive divergence/ 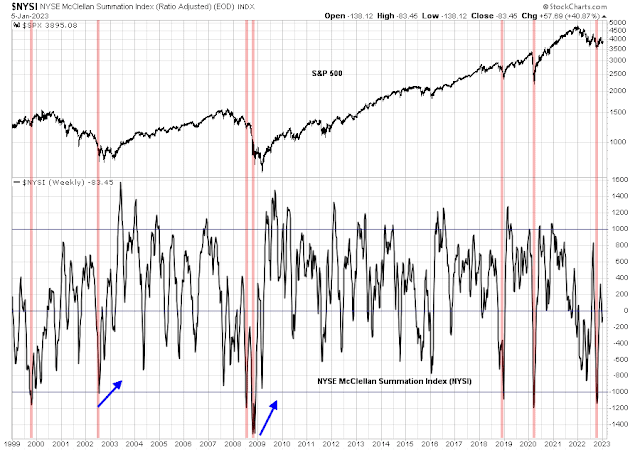 Despite the gloomy fundamental and macro outlook for US equities, here are a couple of non-US bullish factors to consider.
First, the market has become very excited about the China reopening trade. Chinese stocks are on a tear and exhibited a V-shaped rebound. Continued positive momentum could see possible spillover effects as the reopening narrative become a global reflation narrative.

Another bullish tail-risk factor is the possibility of the collapse of the Iranian regime as protests continue to simmer. A regime change would be a bullish shock to risk appetite for two reasons. The most direct would be lower oil prices as Iranian supply become more freely available as sanctions ease, which amounts to an indirect tax cut to consumers. As well, Iranian weapons would no longer be available to Russia, which would put greater pressure on Moscow to end the war, which would compress the geopolitical risk premium. The Economist speculated that, as political pressures build in 2023, it will be the military have to decide whether Iran’s future lie with the ayatollahs or the revolutionary women.

Whoever wins, men with guns will exact a price as guardians of the Islamic or secular revolution. In the uneasy equilibrium between the three pillars of Iranian politics—the clerics, the people and the armed forces—it will be the military men who will have the casting vote on whether Iran’s future lies with the ayatollahs or the revolutionary women.

That said, the usually reliable S&P 500 Intermediate-Term Breadth Momentum Oscillator (ITBM) flashed a short-term buy last week, signaling that a possible counter-trend rally is underway. The historical record of this model is remarkable. Of the 24 signals shown in the last five years, 20 resolved bullishly and only four failed. Subscribers received an alert that my inner trader had initiated a long position in the S&P 500 last Thursday. 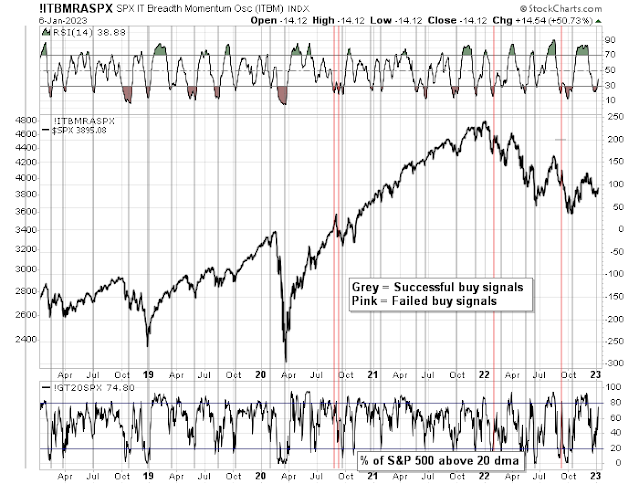 As with all trading models, it’s useful to have both clear entry and exit signals. The buy signal occurs when the 14-day RSI of ITBM recycles from oversold to neutral. A useful rule for exiting the long trade is either the 14-day RSI becomes overbought, or the percentage of S&P 500 above their 20 dma becomes overbought. Current conditions suggest that while there is profit potential in the short-term trade, the duration of the trade is unlikely to last much more than a few days.
Tactically, the short-term bullish impulse is supported by evidence of positive breadth. Even as the S&P 500 tests the top of its range, the equal-weighted S&P 500, the mid-cap S&P 400, and the small-cap Russell 2000 have all broken out into minor uptrends. 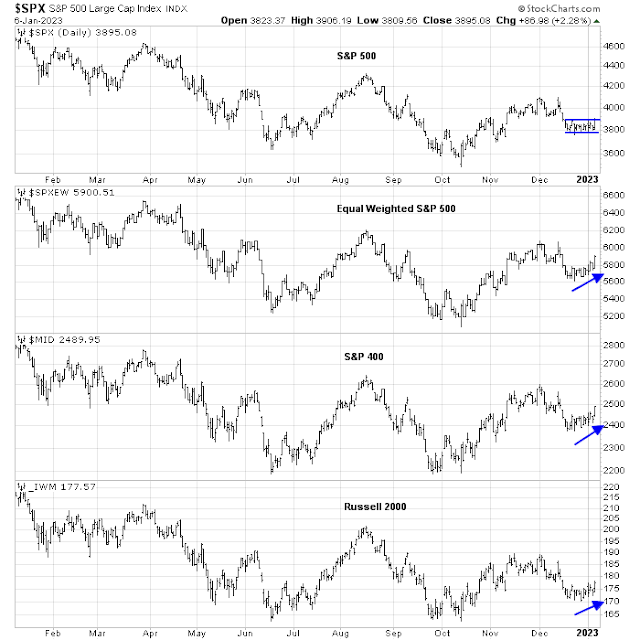 Traders shouldn’t try to overstay their welcome. Investors should take advantage of any strength to lighten up equity positions.
Here are the usual disclaimers about my trading positions:

I would like to add a note about the disclosure of my trading account after discussions with some readers. I disclose the direction of my trading exposure to indicate any potential conflicts. I use leveraged ETFs because the account is a tax-deferred account that does not allow margin trading and my degree of exposure is a relatively small percentage of the account. It emphatically does not represent an endorsement that you should follow my use of these products to trade their own account.  Leverage ETFs have a known decay problem that don’t make the suitable for anything other than short-term trading. You have to determine and be responsible for your own risk tolerance and pain thresholds. Your own mileage will and should vary.