Wall Street is fighting the Fed, should you join in? – Humble Student of the Markets

Fed Chair Jerome Powell made it clear at the post-FOMC press conference. The Federal Reserve is nowhere close to ending its campaign of rate increases. While last two CPI reports show “a welcome reduction in the monthly pace of price increases…It will take substantially more evidence to have confidence that inflation is on a sustained downward path.”

Moreover, the “dot plot” showed a median Fed Funds rate of 5.1%, which is above market expectations. In the aftermath of the FOMC meeting and press conference, Fed Funds expectations barely budged. The terminal rate stayed the same at just under 5%, though the expected path of rate cuts was pushed out by a month from the September to the November meeting. 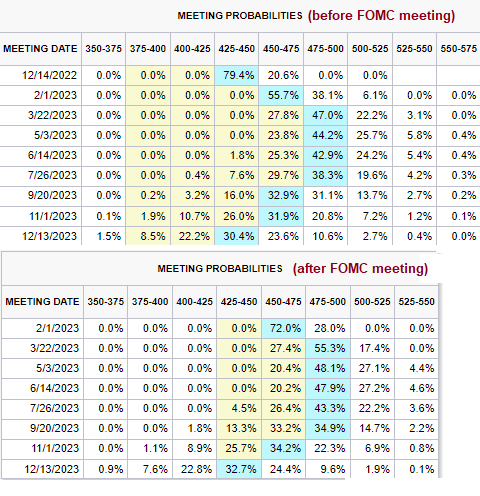 Wall Street is fighting the Fed. Should you join in? Here are the bull and bear cases.

The bear case can be easily summarized as, “Don’t fight the Fed”. The December Summary of Economic Projections (SEP) tells the story. The Fed revised down the median projected GDP growth for 2023, revised up unemployment and inflation rates, and raised the estimate of the Fed Funds rate to 5.1%. More importantly, the consensus range of the Fed Funds rate in 2023 is above 5%. While Powell spoke extensively about the path to a soft landing, the Fed’s version of a soft landing is an economy that essentially flatlines in 2023, with unemployment rising by nearly 1%, rising inflation, and higher interest rates. For many people and businesses, that’s a hard landing and not much better than a recession.

Powell also made it clear that the deceleration in CPI and PCE inflation was welcome news, it was not unexpected. The next inflation hurdle is the tight jobs market and wage growth. Powell made specific reference to wage growth in his recent Brookings speech. Since the publication of that chart, average hourly earnings accelerated upward, which was a worrisome surprise. 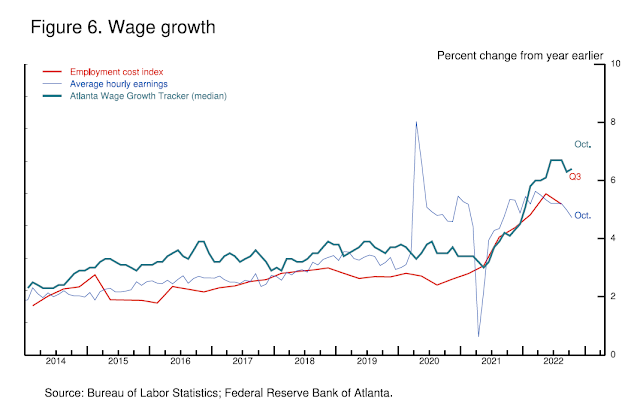 As well, Powell allowed that “many analysts believe that the natural rate of unemployment is elevated at this moment”, which is an expansion of the point he made in his Brookings speech: “Participation dropped sharply at the onset of the pandemic…[and] recent research by Fed economists finds that the participation gap is now mostly due to excess retirements…The data so far do not suggest that excess retirements are likely to unwind because of retirees returning to the labor force.” A smaller labor force and strong labor demand translate to a higher Non-Accelerating Inflation Rate of Unemployment  (NAIRU), which is supportive of stronger wage rates.

Fed Chair Jerome Powell said at the Brookings Institution on 30 November, “We do not want to overtighten because we think cutting rates is not something we want to do soon,” but if financial conditions ease because markets price in such cuts, a peak policy rate of 5.25% may not be sufficient to put inflation on a path to return to 2% over time.

He also said the quiet part out loud. Wage growth is too high and, in all likelihood, the Fed will have to induce a recession to tame it.

Although recent readings on U.S. Consumer Price Index (CPI) inflation are moving in the right direction, wage inflation at present is running above a 5% annualized rate and underlying productivity is, charitably, estimated to be growing at around a 1.25% pace, implying that wage inflation would eventually need to decelerate by 1 to 2 percentage points for the Fed to be confident that its 2% inflation goal can be reached. Historically, declines in U.S. wage inflation of this magnitude have only occurred in recessions, and the Fed itself in the December SEP projects the unemployment rate will rise to 4.6% by the end of 2023, more than a percentage point higher than the 3.5% unemployment rate recorded in September of this year.

In summary, the FOMC remains hawkish. The bond market responded with a rally. Bond prices remain in a well-defined uptrend, with the 7-10 Treasury ETF (IEF) above its 10 dma, which is above its 20 dma

For equity bulls, it’s not a case of fighting the Fed, but disbelief of the Fed’s projections. 2-year Treasury yields, which is a proxy for the expected Fed Funds rate, are already rolling over. Past peaks in the 2-year yield were coincident or led peaks in the Fed Funds rate. 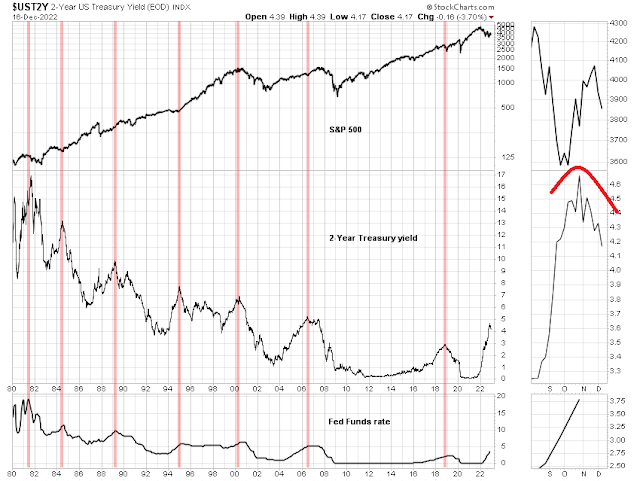 It’s therefore no surprise that Wall Street is throwing a party. Yield spreads are narrowing and financial conditions are easing. Powell was asked about easing financial conditions at the press conference and he gave two slightly different replies. In response to Steve Liesman of CNBC, Powell said that “policy not sufficiently restrictive stance yet…[and to] expect ongoing hikes”. In response to Michael McKee of Bloomberg TV and Radio, Powell said, “Policy is restrictive…[and] getting close to sufficiently restrictive”. The lack of a strong pushback against easing financial conditions opens the door that the Fed could stand aside and allow a risk-on rally in asset prices.

Despite the widespread expectation of a recession, one unexpected development is the stabilization of earnings estimates. The latest update of S&P 500, S&P 400, and S&P 600 forward EPS estimates show upward revisions in two of the three indices. This development needs to be monitored. It could be just a data blip, or it could be the start of a welcome new trend. 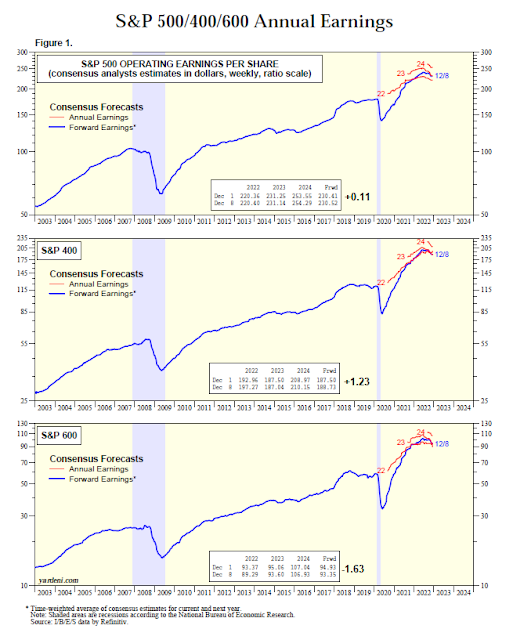 The November 2022 NFIB small business survey also shows some green shoots. While readings are generally weak, they are showing signs of improvement.
As a consequence, small business confidence edged up in November and it’s recovering from historically low levels. 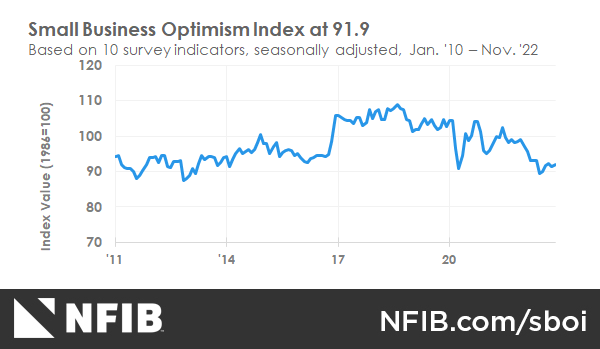 The stage could be set for a melt-up. The BoA Global Fund Manager Survey showed that investment managers’ risk appetite was washed-out and turning up. If conditions continue to improve, asset prices could see a FOMO buying stampede. 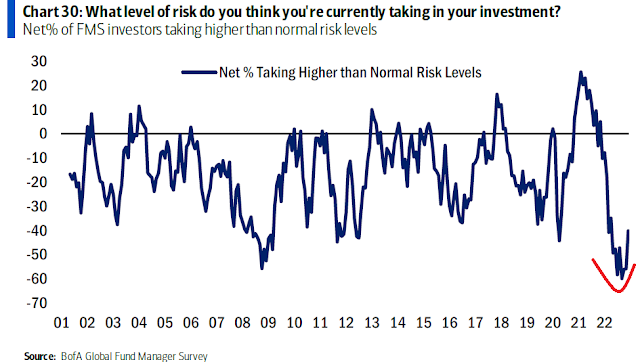 The one possible caveat is valuation. The S&P 500 is trading at a forward P/E of 17.1, which is not cheap by historical standards when compared to the 10-year yield. However, the mid and small-cap S&P 400 and S&P 600 are trading at lower multiples when the 10-year yield was at similar levels. 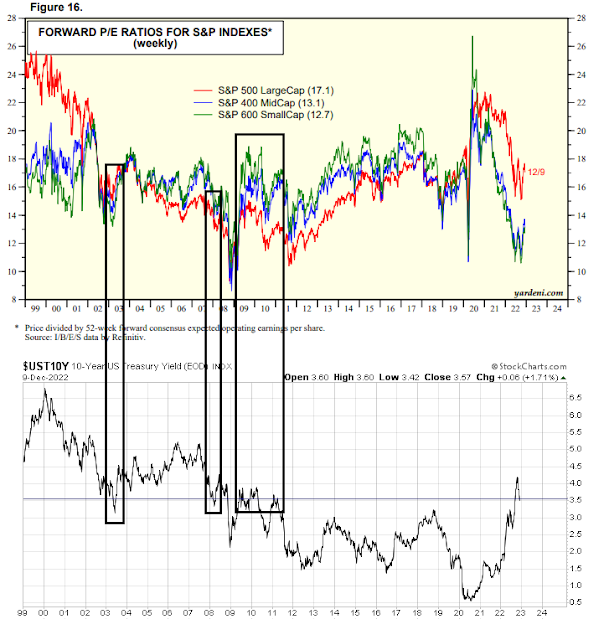 The key risk to the bullish outlook can be summarized by Fed Vice Chair Lael Brainard’s speech on November 28, 2022, at a BIS conference that highlighted the risk of rolling supply shocks to the global economy. Just when you think inflation is going away, it comes back from the dead like the monster in horror movies.

After several decades in which supply was highly elastic and inflation was low and relatively stable, a series of supply shocks associated with the pandemic and Russia’s war against Ukraine have contributed to high inflation, in combination with a very rapid recovery in demand. The experience with the pandemic and the war highlights the challenges for monetary policy in responding to a protracted series of adverse supply shocks. In addition, to the extent that the lower elasticity of supply we have seen recently could become more common due to challenges such as demographics, deglobalization, and climate change, it could herald a shift to an environment characterized by more volatile inflation compared with the preceding few decades

We don’t know where the next supply shock may come from, but since 2020 the global economy has been hit by a pandemic, a series of climate events like heat waves and floods, and a major war in Europe. What’s next? Brainard believes that central bankers need to stay more hawkish in order to keep inflation expectations under control.

A protracted series of adverse supply shocks could persistently weigh on potential output or could risk pushing inflation expectations above target in ways that call for monetary policy to tighten for risk-management reasons. More speculatively, it is possible that longer-term changes—such as those associated with labor supply, deglobalization, and climate change—could reduce the elasticity of supply and increase inflation volatility into the future.

An academic paper by Isabella Weber et al entitled “Inflation in Times of Overlapping Emergencies: Systemically Significant Prices from an Input-output Perspective” also raised the risk of shocks from overlapping emergencies. The academics studied which price shocks mattered and found that price shocks in about 10 sectors generate a much larger total inflation impact than all other sectors. These results will be important to policymakers should the rolling price shock scenario outlined by Brainard become a reality. 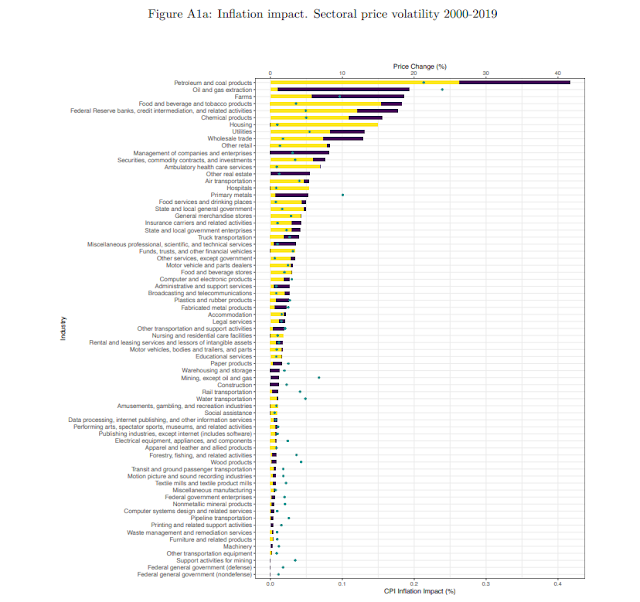 The most obvious source for a series of rolling supply shocks is climate change. While we can debate the global warming issue until we’re blue in the face, financial effects are already being felt. A Bloomberg podcast indicates that extreme weather events are forcing risk to be re-priced in the insurance markets.

I began this publication by rhetorically asking if investors should join the side that’s fighting the Fed. The bull case is persuasive, but recent signs of strength could represent a false start much in the manner of the China reopening trade. which retreated in response to rising COVID cases and a poor growth outlook. Historically, the Fed has always underestimated the severity of recessions as measured by the unemployment rate. Positive estimate revisions at this stage of the cycle seems overly ambitious. 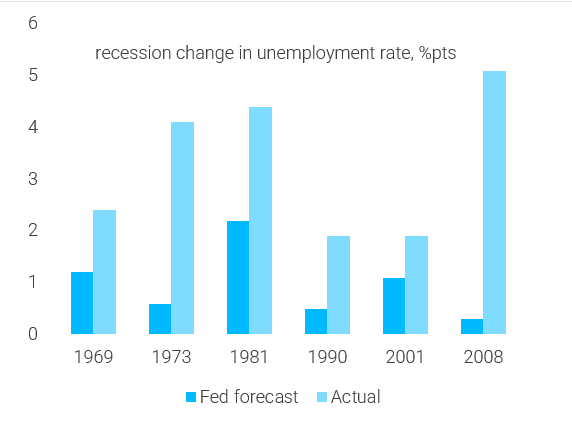 In the face of a hawkish Fed and the risk of additional disruptions, it pays to be more cautious and maintain a balanced view of risk and return. Investors seeking exposure to US equities will find better value in mid and small-cap stocks.

6 thoughts on “Wall Street is fighting the Fed, should you join in?”