It’s time to conduct one of my periodic market leadership reviews. The review will be done through different viewpoints, starting from the top from an asset lens, a global equity lens, and finally through a factor, or style, lens.

The primary tool for my analysis is the Relative Rotation Graph, or RRG chart, which is a way of depicting the changes in leadership in different groups, such as sectors, countries or regions, or market factors. The charts are organized into four quadrants. The typical group rotation pattern occurs in a clockwise fashion. Leading groups (top right) deteriorate to weakening groups (bottom right), which then rotate to lagging groups (bottom left), which change to improving groups (top left), and finally completes the cycle by improving to leading groups (top right) again. All of the RRG analysis is conducted in USD and therefore includes all currency effects in the returns. 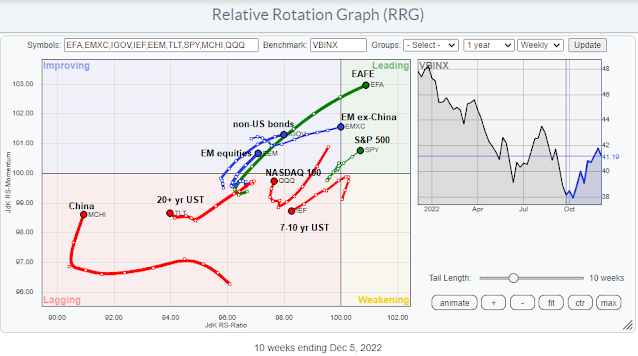 Here are my main takeaways from this analysis: 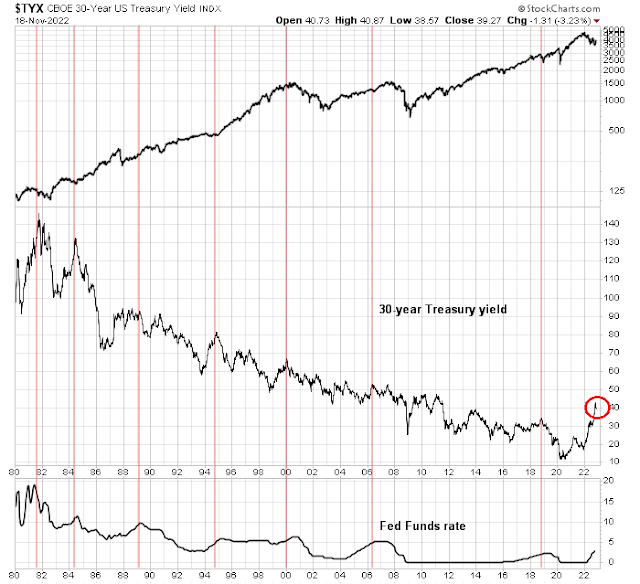 Tactically, the uptrend shown by both the iShares 20 year+ Treasury ETF (TLT) and iShares International Treasury Bond ETF, as evidenced by the price above the 10 dma, which is above the 20 dma, and above the 50 dma, are constructive signs that uptrends are in place and global bond prices have turned. 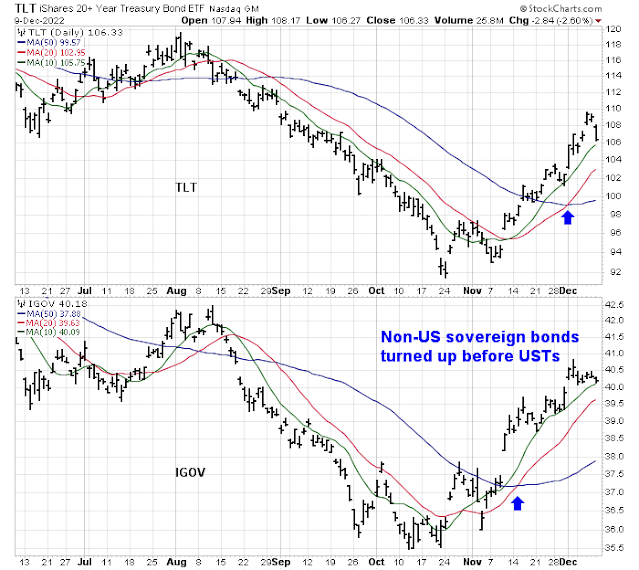 Viewing global equities on a region and major country basis, the following themes stand out: 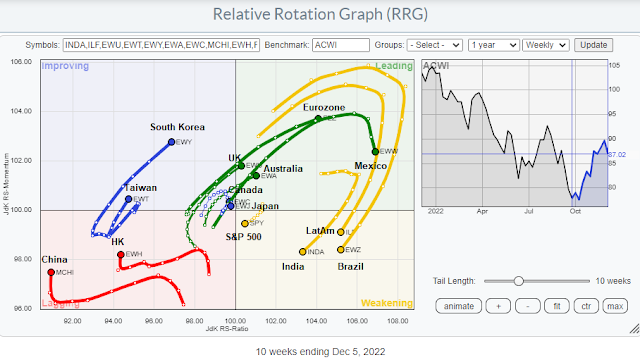 The break in US equity performance is not a surprise. US equities have been trading at a premium P/E to the rest of the world for about a decade. The strong performance was attributable to the fundamental dominance of FANG+ stocks, which are now in retreat. 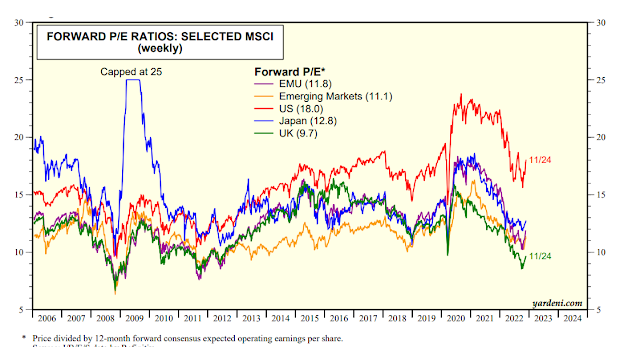 The lag in performance of US large-cap stocks can also be seen in the chart of regional relative performance. The NASDAQ 100 peaked in August relative to MSCI All-Country World Index (ACWI) and the S&P 500 peaked in early November. Consistent with the more detailed RRG chart of region and country rotation, European equities have been on a tear since September, while Japan, China, and EM have gone nowhere in the past few months. 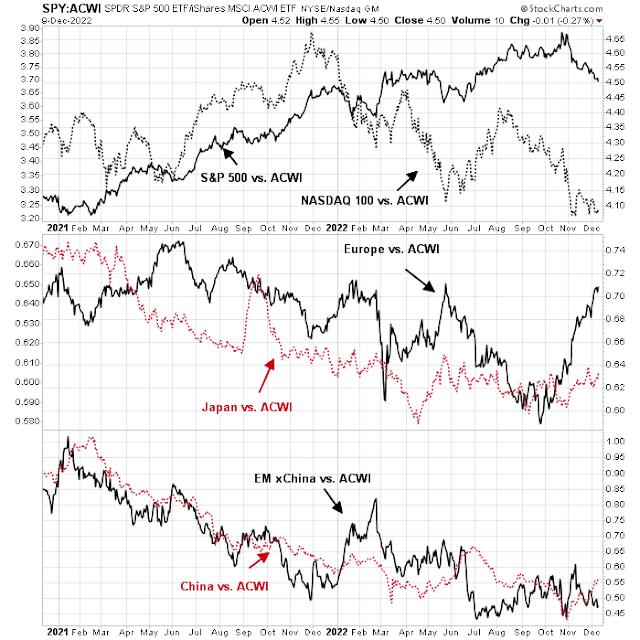 An analysis of the US factor rotation chart tells a story of the devastation of growth stocks and the emergence of value stocks. Growth factors are in the bottom half of the chart, indicating weakness, while the top half is dominated by value factors of different descriptions. 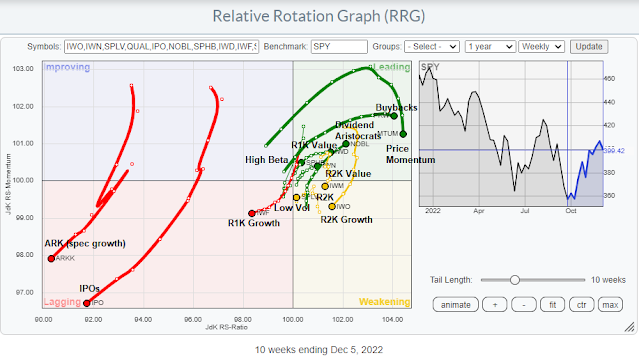 I would warn, however, that the apparent superior relative performance of value stocks is more attributable to the poor performance of FANG+ stocks. While US value has outpaced growth since September, EAFE value has gone nowhere against growth during the same time period.

In addition, many of the value sectors, which have a high degree of cyclical exposure, appear to be extended in the short run and they are prone to a relative pullback. 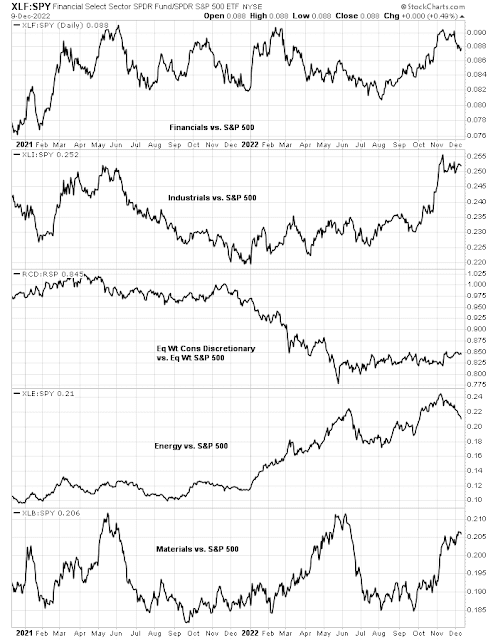 More disturbing is the relative performance of defensive sectors, which have been in relative uptrends since August despite the market advancing during that period. 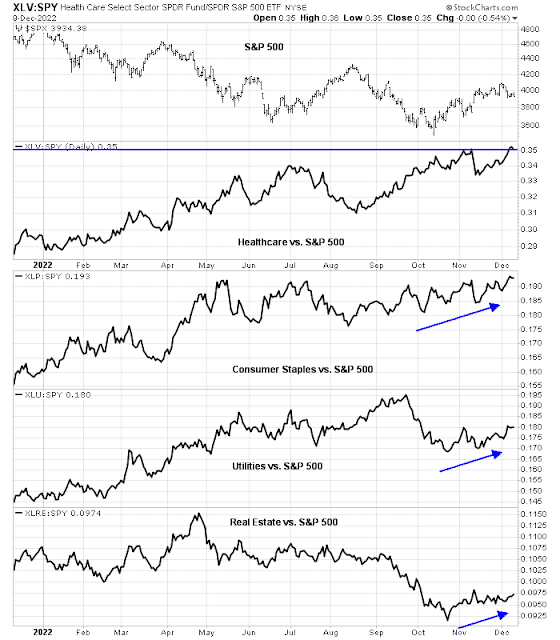 That said, the relative performance pattern of small-cap value sectors appears to be constructive. 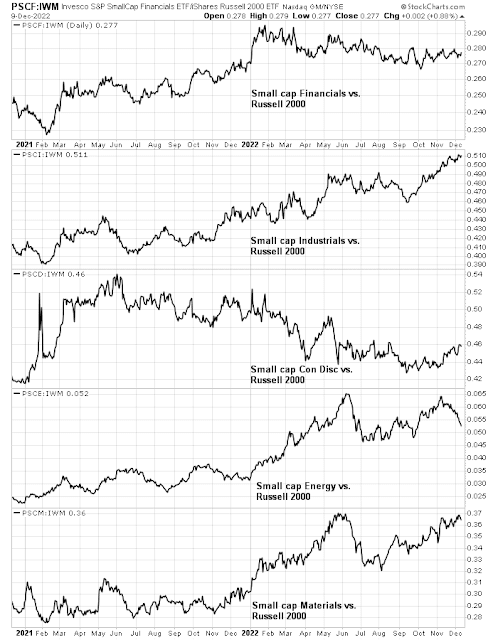 In conclusion, bond markets are discounting a global growth slowdown. Different regions of global equities are in various phases of recovery. I reiterate my conviction to overweight Europe on a FIFO basis of entering and exiting recession. European equities are attractively priced on a forward P/E basis and FactSet reported that forward 12-month EPS for MSCI Europe has risen to a new cycle high. 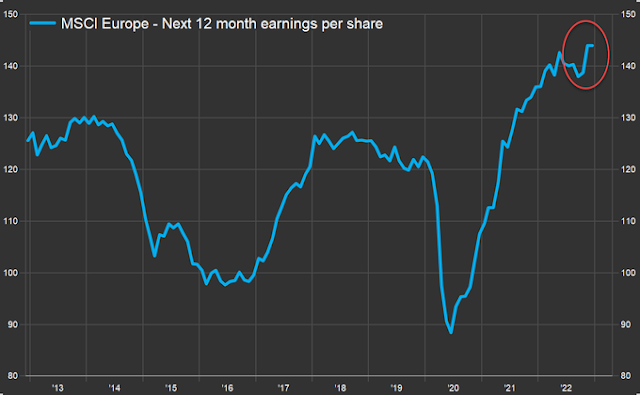 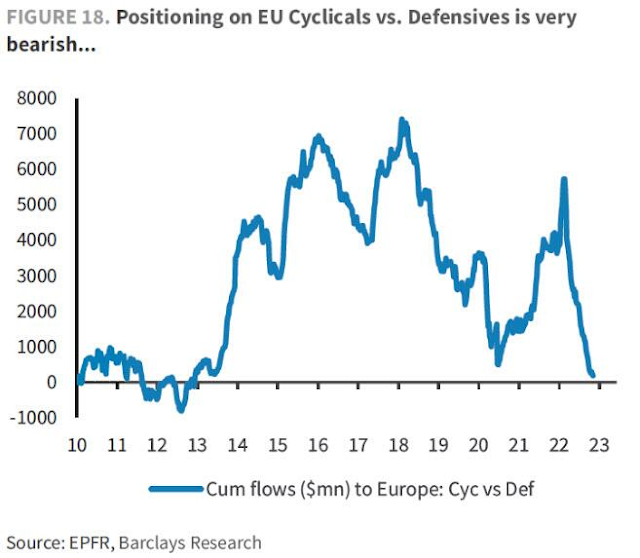 China and Asia still needs time to consolidate and digest their relative gains after the recent China reopening rally. 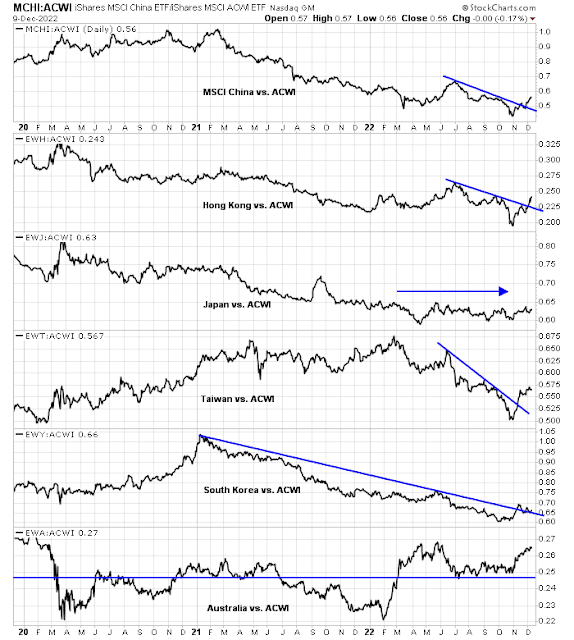 The next shoe in the reopening drama is about to drop. China’s National Health Commission announced 10  measures that amount to a pivot from zero-COVID containment to mitigation. Bloomberg reported that China faces the risk that infection rates will rise rapidly, along with underreporting risk as testing requirements are eased.

With requirements for frequent lab testing dialed back significantly, anecdotal evidence suggests undetected cases are on the rise. Some health experts are predicting actual infections will far surpass the official tally.

The Financial Times also reported China is bracing for COVID outbreaks among medical staff and migrant workers.
Q1 growth is likely to be challenging for China. Already, China’s Economic Surprise Index, which measures whether economic statistics are beating or missing expectations, is falling. A spike in COVID infections will be a further drag to the economy. Expect some bumpiness in the coming months. 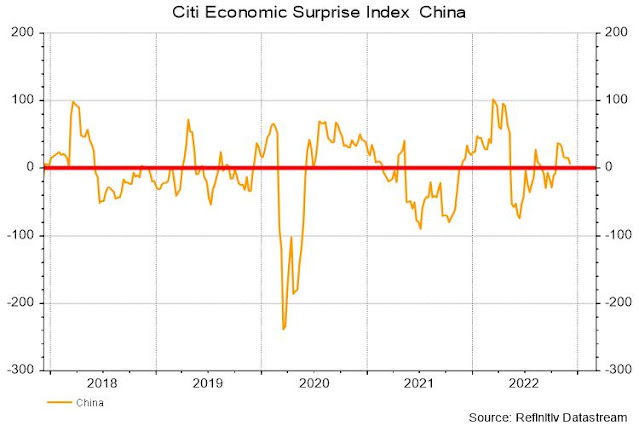 Investors who are focused on the US market by mandate are advised to focus on value and quality factors. Mid and small-cap stocks are more attractive on a valuation basis compared to large-caps. 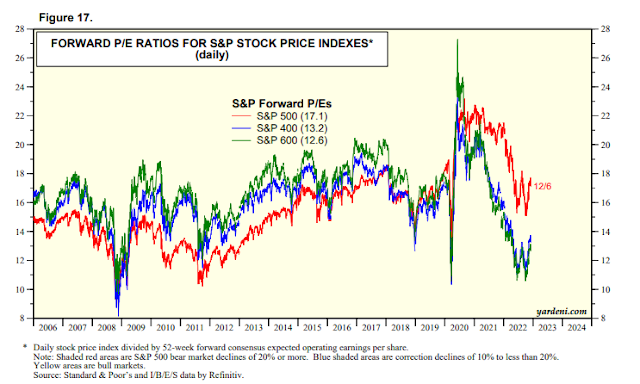 The US market appears to be undergoing a secular rotation from growth to value and from large-caps to small-cap leadership. 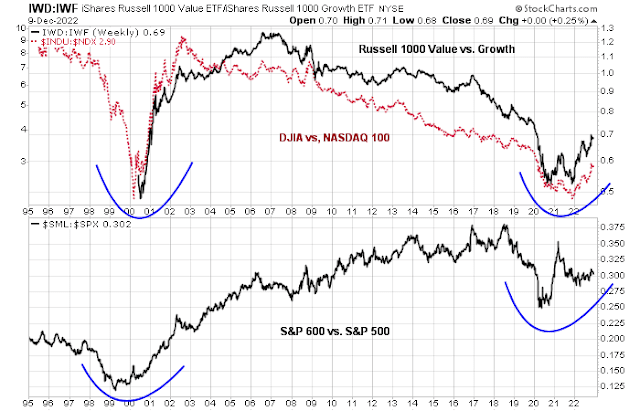 Tactically, a strategy of buying Treasuries and non-US stocks could have considerable upside potential. An analysis of the holdings of the iM DBi Managed Futures ETF (DBMF), which is a proxy for CTA futures programs, shows that the fund is short bonds and roughly neutral on equity positioning. Should bonds and non-US equities rip, buying potential from CTAs could drive prices quite a bit higher. 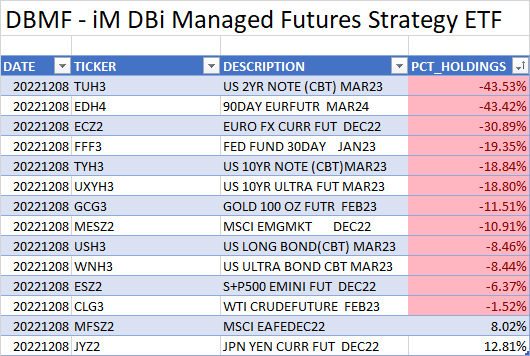