Mid-week market update: So much for the S&P 500 testing the 200 dma and falling trend line resistance. The index reached its resistance zones late last week and pulled back to test a key support level.

What’s puzzling is the lack of a fundamental driver for the market weakness. While I have been cautious, this kind of market action even surprised me.

A narrative has crept up this week that the market is pivoting from a fear of rate hikes to a fear of recession. As stock prices weakened, bond prices rallied, which broke the 2022 pattern of the synchronization of stock and bond prices. This could be interpreted as the bond market discounting a growth slowdown while the stock market is anticipating an earnings slowdown.
Take a look at how commodity prices and the Treasury yield curve have behaved. Commodities took a nosedive this week in the face of the China reopening news, which I interpret to mean that the market is expecting slower global growth. Indeed, last night’s reports of China’s imports and exports missed expectations, which is a signal of weak global demand. In addition, different yield curve spreads have been inverting, indicating that the bond market expects slowing growth. The 10s30s yield curve (bottom panel) is nearly inverted. In the last two sell-offs this year, the stock market didn’t bottom until the 10s30s started to turn up, which means that we could be early in this latest pullback episode. 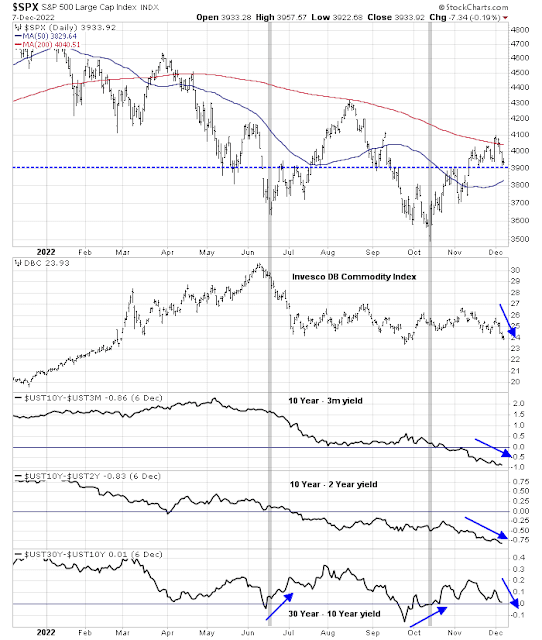 The usually reliable S&P 500 Intermediate-Term Breadth Momentum Oscillator (ITBM) flashed a sell signal last night when its 14-day RSI recycled from overbought to neutral. There have been 21 such signals in the past five years, the market fell on 16 occasions (pink vertical lines) and advanced on five (grey lines). 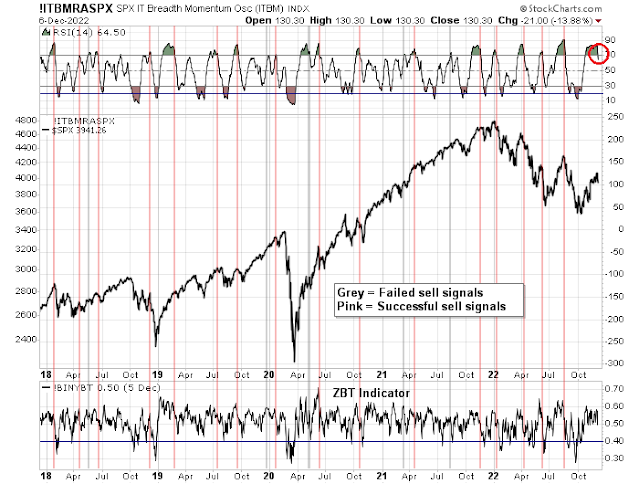 How do the bears know when to cover their shorts? I can offer two guidelines. In the past, trigger points to unwind bearish exposures occur whenever either the 14-day RSI of ITBM falls into oversold territory, or when the Zweig Breadth Thrust Indicator becomes oversold. The market has overshot these signals before, but most of the losses have been seen when these buy-cover signals have occurred.
As for timing, successful ITBM sell signals typically have lasted 10-14 days until the buy-cover signal. This would put us right near the end of the tax-loss selling period just before Christmas and just in time for the Santa Claus rally (via Mark Hulbert).

The several-day period beginning after Christmas does exhibit abnormal strength. According to the Stock Traders Almanac, this genuine Santa Claus rally period lasts from the first trading session after Christmas and continues through the second trading session of the New Year. The Dow over this period has risen in 77% of the years since the index was created in 1896, and produced an average gain of 1.5%. Across all other periods of equal length over the last 126 years, the Dow has risen 56% of the time and produced an average gain of just 0.2%. These differences are statistically significant.

In the meantime, investors will have to look forward to the CPI report next Tuesday, followed by the FOMC decision Wednesday, which will be sources of volatility.
My inner investor remains roughly neutrally positioned at the asset allocations specified by investment policy. My inner trader remains short. He is enjoying the latest round of market weakness but keeping an eye out for the exit.
Disclosure: Long SPXU

4 thoughts on “Making sense of the market’s risk reversal”