Second time lucky, or Fooled me once? – Humble Student of the Markets 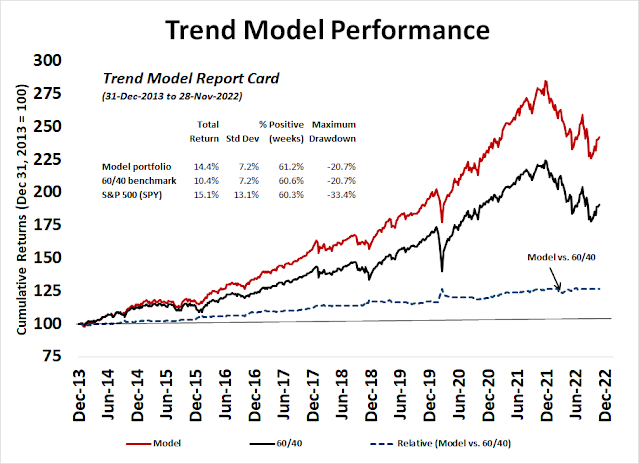 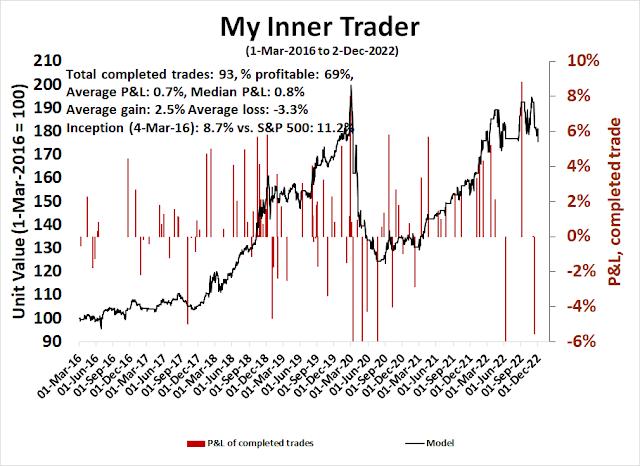 Update schedule: I generally update model readings on my site on weekends. I am also on Twitter at @humblestudent and on Mastodon at @humblestudent@toot.community. Subscribers receive real-time alerts of trading model changes, and a hypothetical trading record of those email alerts is shown here.

Here we go again. A previous “can’t miss” breadth thrust indicator of a new bull market just flashed a buy signal. The percentage of S&P 500 above their 50 dma rose from below 5%, which is an oversold extreme, to over 90%, an overbought extreme. Such a breadth had been a buy signal with a 100% success rate until this year. This indicator flashed a buy signal in August, which failed badly and it recycled back to below 5%. 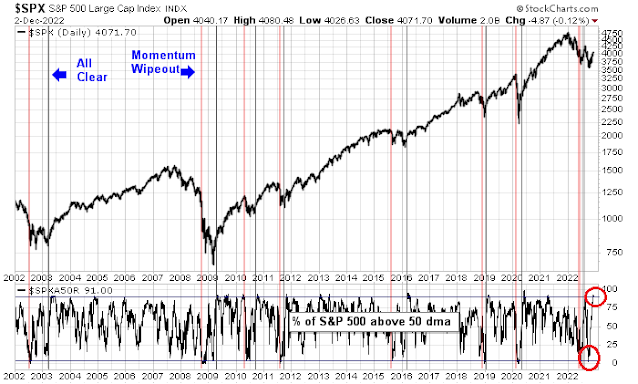 The equity bull case rests strictly on historical studies of price momentum. While there are many variations of the bullish resolutions of breadth thrusts and price momentum, I offer the following examples.
Ryan Detrick pointed out that the S&P 500 just put in two back-to-back gains of 5% or more. These examples of strong price momentum have tended to resolve bullishly.

Steve Deppe observed that the S&P 500 ended November with a monthly close with a trailing 2-month return of 10% or more and negative trailing 6-month returns. Such instances of strong momentum after a bear trend have also tended to be bullish.

Jonathan Harrier published a historical study that defended the bullish conclusion of the breadth thrust signal based on the percentage of S&P 500 stocks above their 50 dma. All were higher six and 12 months later. 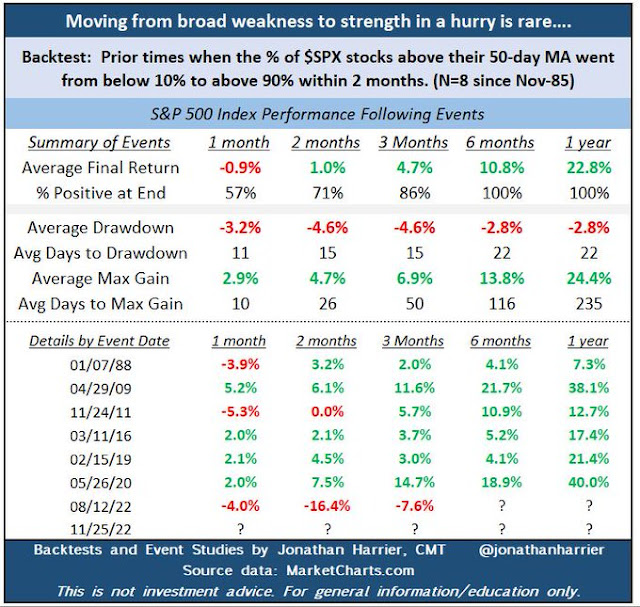 The devil is in the details. When the first buy signal from the breadth thrust signal appeared in August, I pointed out that while the technical and price momentum outlook was positive, the macro outlook was negative. Moreover, the Zweig Breadth Thrust, which was the rare granddaddy of breadth thrust signals, only flashed six buy signals in the out-of-sample period since Marty Zweig published his book in 1986. While the S&P 500 was higher 12 months later in all cases, the market sputtered immediately after the buy signal in two instances during periods when the Fed was raising rates. The lesson here is that while technical analysis does add value, top-down macro analysis also matters. In the current case of the breadth thrust buy signal, what would the investor be discounting if he were to buy the market?

What are the bulls discounting?

One positive macro development is a softening of inflation indicators. However, analysis from Goldman Sachs found that an inflation peak is only equity bullish if it’s not followed by a recession. If you’re bullish, you’re betting on a soft landing. 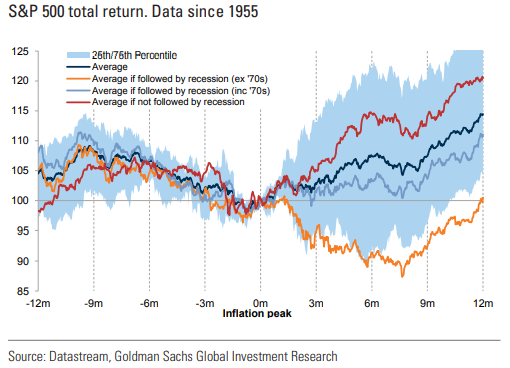 New Deal democrat, who maintains a modeling discipline of keeping coincident, short leading, and long leading indicators, has some bad news. Starting with his analysis of ISM data:

Going back almost 75 years, the new orders index has always fallen below 50 within 6 months before a recession. Recessions have typically started once the overall index falls below 50, and usually below 48.
Which means that today’s report for November comes very close to meeting all of the above criteria. The overall index declined below 50 for the first time since May 2020, at 49.0. The new orders subindex declined -2 to 47.2, the 5th time in the past 6 months that it has been below 50, and only 0.1 above its September low of 47.1:

Even though the November Jobs Report was stronger than expected, his analysis of the high-frequency initial jobless claims data is coming close to a recession signal:

From a global perspective, the South Korean economy is a sensitive bellwether of global growth. South Korea’s October industrial production fell -3.5%, which was the biggest decline since April 2020. In addition, the SCMP reported that: 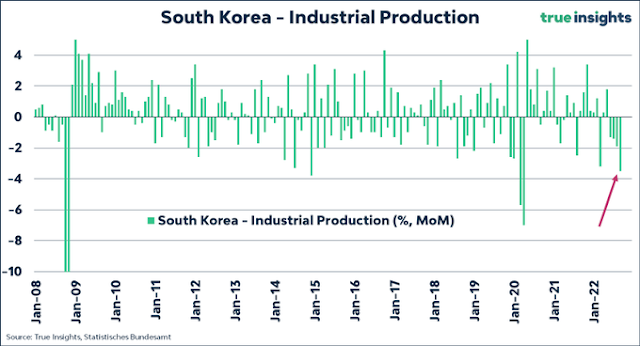 What did Powell say?

The market adopted a risk-on tone after Fed Chair Jerome Powell’s speech at Brookings Institution last week (also see video of the speech and Q&A). Market participants appeared to have focused on Powell’s confirmation that the Fed will temper its December rate hike to 50 basis points and he did not want to overtighten.
There were several points that the bulls may have missed. First, Powell revealed that the natural rate of unemployment, or Non-Accelerating Inflation Rate of Unemployment (NAIRU), has risen strongly since the pandemic, and the labor force participation rate (LFPR) has not fully recovered. The weakness in LFPR was mainly attributable to early retirement as older workers left the workforce and to a lesser extent a slower growth in the working population, and lower rates of immigration. Powell observed that older workers have not retired and they are unlikely to return.
This sets up a jobs market dynamic of a higher NAIRU and a persistent tighter labor market. While the Fed may be correct to slow the pace of its rate hikes, it will be more difficult to cut interest rates if NAIRU is still elevated and the job market stays tight. The market is expecting a Fed Funds plateau to begin in early 2023 and next summer or fall. An elevated NARIU makes that scenario less likely.

In the Q&A discussion about the r*, or the natural rate of interest, Powell revealed that the Fed is monitoring how the market responds to monetary policy to measure whether how the tightness of monetary policy. He also stated in his speech that “ongoing rate increases will be appropriate in order to attain a policy stance that is sufficiently restrictive to move inflation down to 2 percent over time”.
The Chicago Fed National Conditions Index has been easing and financial conditions eased further in the aftermath of Powell’s speech. Did the Fed Chair overdo the dovish tilt? Did he inadvertently ease financial conditions with his speech? (Asking for a friend).

In summary, Fed policy in 2023 can be summarized as raise and hold. In the current circumstances, the odds of rate cuts later in the year are relatively low, which is contrary to market expectations. 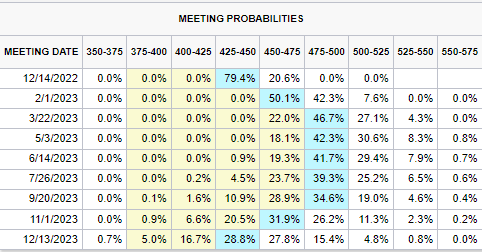 Notwithstanding the macro case to be cautious on stocks, here are the technical and sentiment bear cases. Insider activity has seen a recent surge of selling.

Jay Kaeppel at SentimenTrader found that similar past episodes have been short-term bearish but longer-term bullish for stock prices. 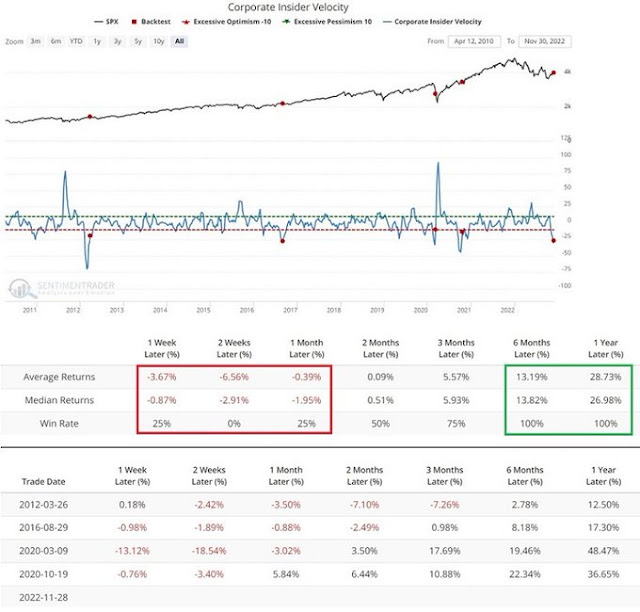 Don’t forget that the Fed’s quantitative tightening program is still operating in the background. Liquidity conditions are starting to roll over, and they have been strongly correlated to the S&P 500.

The S&P 500 is testing key resistance levels, as defined by its 200 dma and falling trend line, while it is overbought on the percentage of stocks above their 20 dma. The market has been behaving in an unusual way. It failed to rally significantly on Thursday after the tame PCE report and it rallied to nearly even after the stronger than expected Jobs Report on Friday. Do you feel lucky? 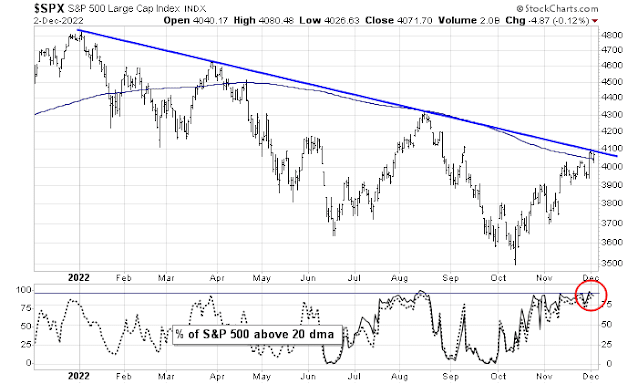 Finally, I would like to add a note about the disclosure of my trading account after discussions with some readers. I disclose the direction of my trading exposure to indicate any potential conflicts. I use leveraged ETFs because the account is a tax-deferred account that does not allow margin trading and my degree of exposure is a relatively small percentage of the account. It emphatically does not represent an endorsement that you should follow my use of these products to trade their own account.  Leverage ETFs have a known decay problem that don’t make the suitable for anything other than short-term trading. You have to determine and be responsible for your own risk tolerance and pain thresholds. Your own mileage will and should vary.
Disclosure: Long SPXU

21 thoughts on “Second time lucky, or Fooled me once?”