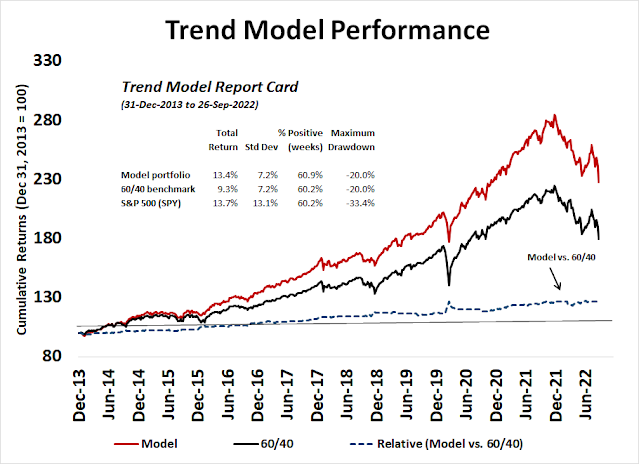 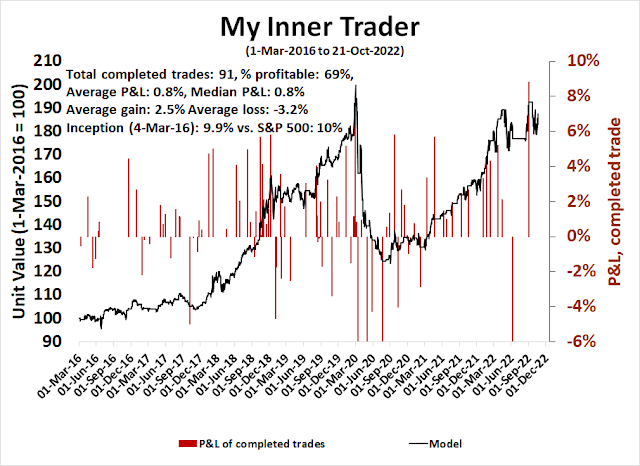 As the S&P 500 tests a key support level just above its 200-week moving average and while exhibiting a series of positive RSI divergences, I am seeing five constructive signs that the market may be forming a short-term bottom. 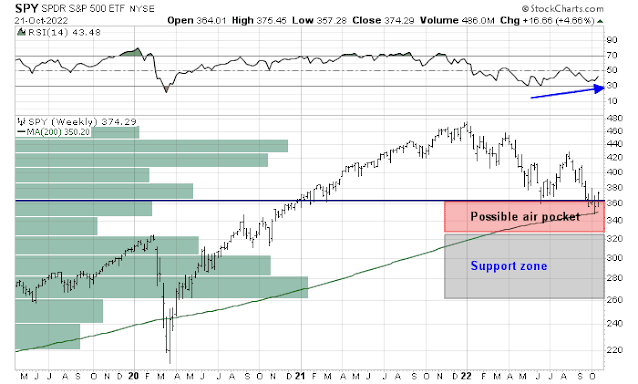 The first is better underlying breadth. Even when the S&P 500 struggled at a key support level, the mid- and small-cap S&P 400 and Russell 2000 held support in more solid manners. 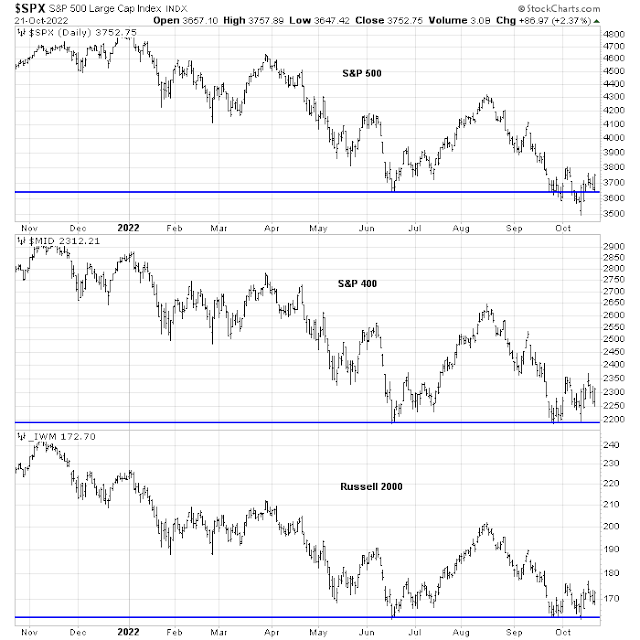 Friday’s strong gains on high volume qualified as a Follow-Through Day, as specified by William O’Neil, which is a sign of strong price momentum. 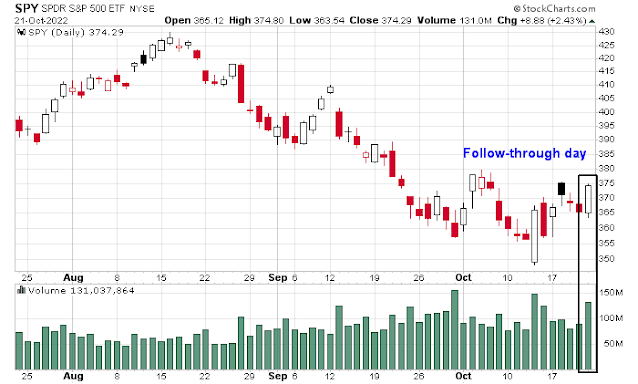 From a longer term perspective, the 10 dma of the NYSE McClellan Oscillator recycled from an extreme oversold level, indicating price momentum turnarounds. There have been eight instances of this signal since 1998. All of them coincided with strong short-term market rebounds. 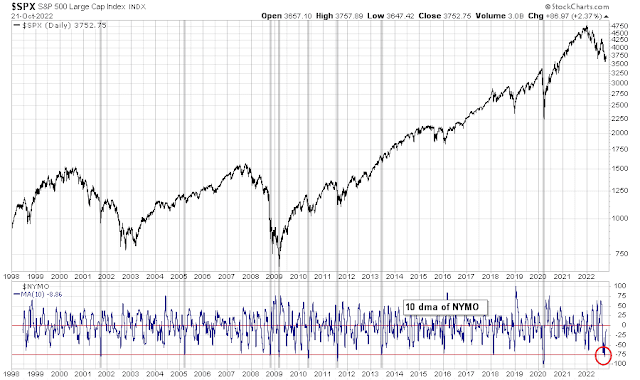 Signs of a cyclical bottom 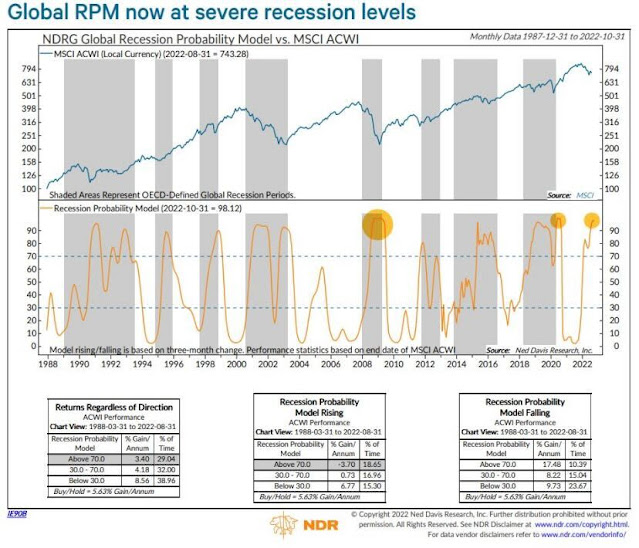 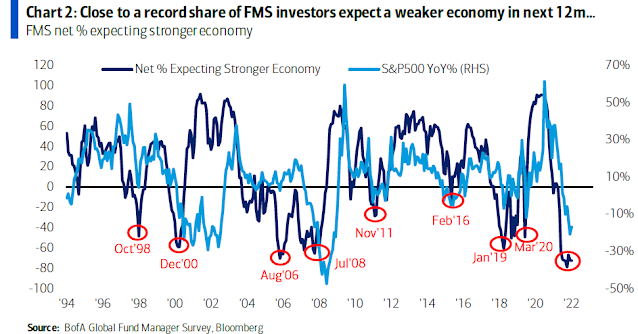 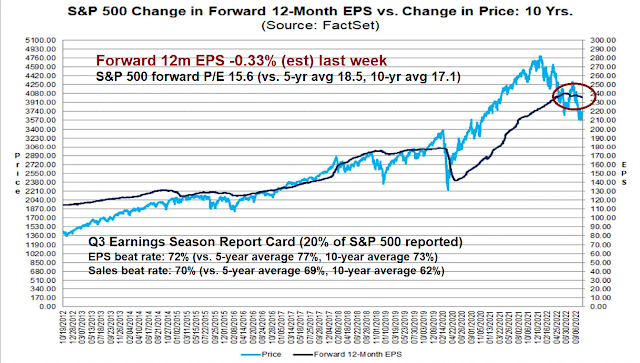 The cyclically sensitive copper/gold and base metals/gold ratios have been flat to up since July, which is also inconsistent with the expectation of global weakness.

I speculated in late August about the spillover effects of European weakness (see Will Europe drag us into a global recession?). At the time, the EU was beset by high energy prices because of the Russo-Ukraine war and fears of de-industrialization loomed. Even today, the BoA Global Fund Manager Survey shows that the Eurozone is the second lowest regional underweight behind the UK. 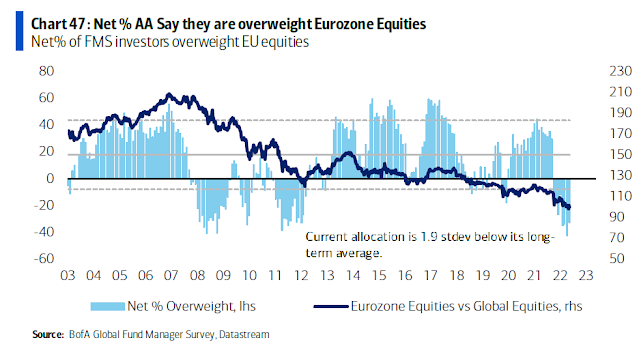 At the time, I set out two bullish tripwires based on the first-in-first-out principle. Europe was the first to enter a recession, and if signs emerged that it was beginning to emerge out of a slowdown, that would be a positive sign for risk appetite. Both of those tripwires have been triggered.
The first was the BASF and Dow Chemical pair trade. Both companies are giant chemical companies whose stock prices had historically tracked each other closely. BASF dramatically lagged against Dow when the war began, but now it has staged a relative breakout out of a base. 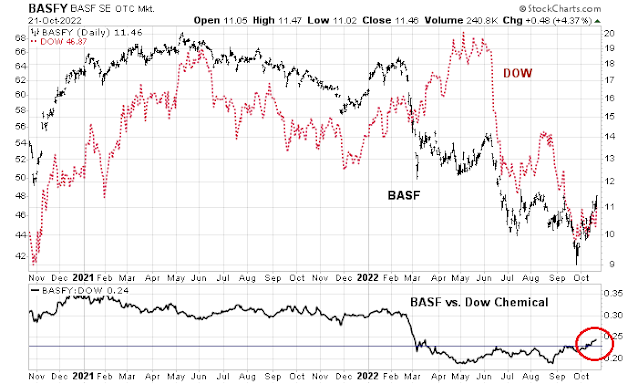 In addition, MSCI Poland has staged a relative breakout out of a downtrend against the MSCI All-Country World Index (ACWI), with both vehicles measured in USD terms. I interpret this to mean that geopolitical risk is fading in Europe. 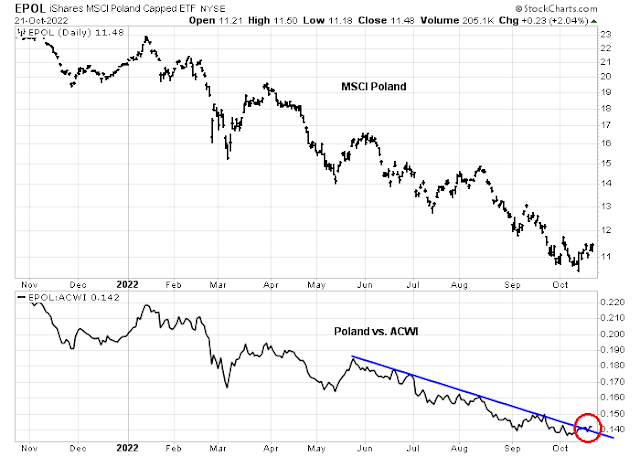 First in, first out. These are the signs of green shoots of global risk appetite.

Lastly, sentiment models are still washed out, which is contrarian bullish. Investors Intelligence sentiment is showing more bears than bulls, which is an unusual and excessively bearish condition. 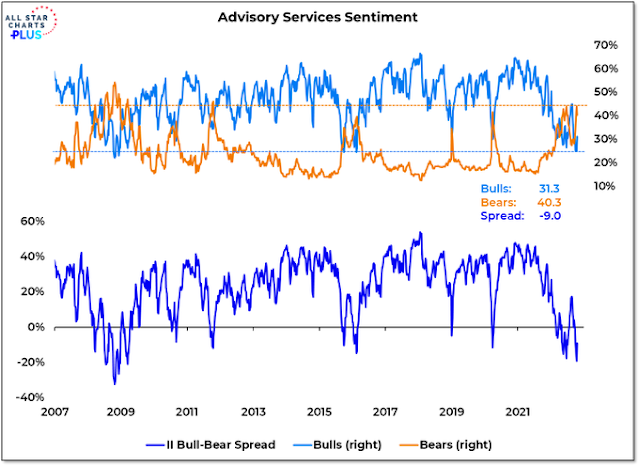 The latest AAII weekly survey still shows far too many bears. Both the bull-bear spread and bearish percentage are consistent with major market bottoms. While stock prices can weaken further from these sentiment levels, bearish investors would have to be betting on a major financial crisis like the Lehman Crisis in order to realize more downside. 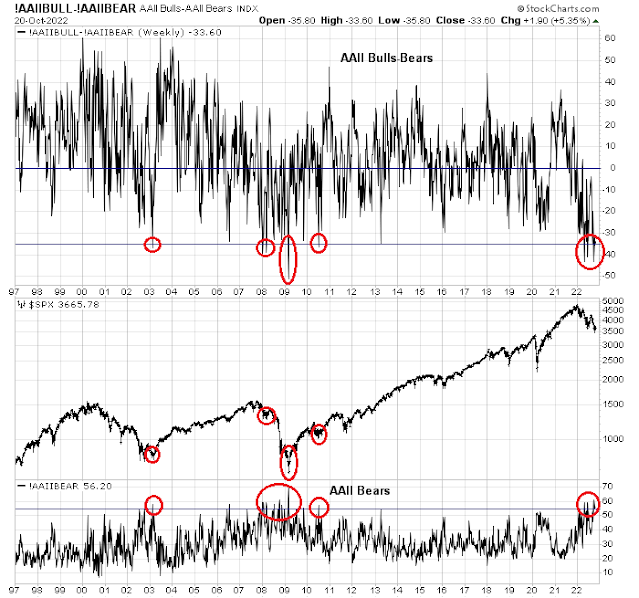 In conclusion, a combination of factors, namely positive breadth, improving price momentum, signs of cyclical strength, European turnaround, and excessively bullish sentiment, are serving to signal a possible tactical bottom and put a floor on stock prices.
However, investors should recognize that the current environment has been dominated by a single macro trade, the inverse correlation of the S&P 500 with the USD, which is a two-edged sword. Should interest rate expectations rise further to boost the dollar, it would represent a significant headwind for stock prices. On the other hand, now that Fed speakers are in a blackout period ahead of the November FOMC meeting and the last comments were less hawkish than expectations, the price momentum of that commentary has the potential to spark a risk-on stampede without interruption or contradiction from Fed officials.

4 thoughts on “Five constructive signs of a short-term bottom”