In light of the dismal performance in the first nine months of a 60/40 portfolio in 2022, it’s time to ask, “What’s changed and what adjustments should investors make to their portfolios?” 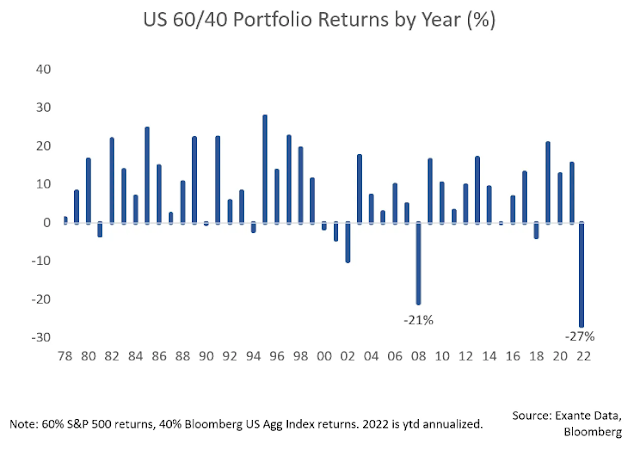 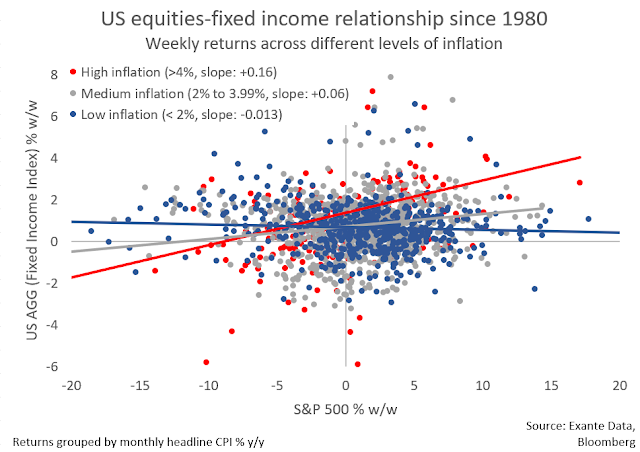 The global inflation picture looks dire. Inflation rates are surging all around the world/ 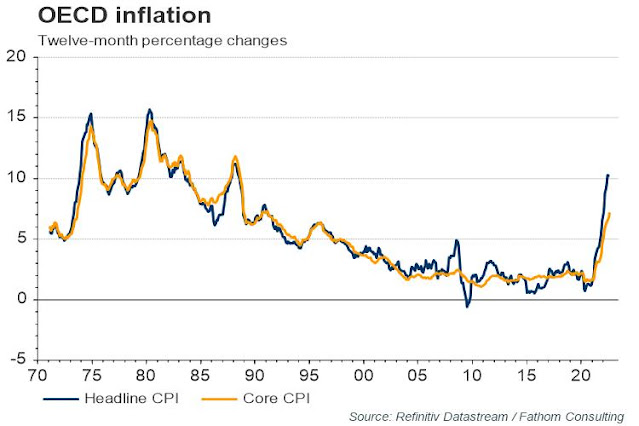 In response, central banks around the world have raced to hike interest rates and raised the risk of a global recession. 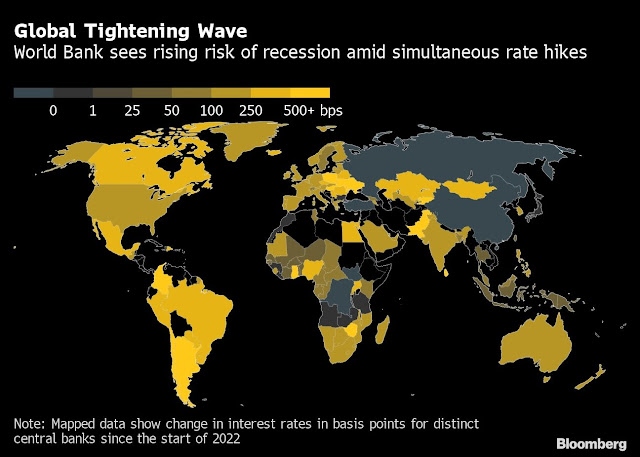 While the current inflation acceleration is cyclical in nature, the long-term secular trend is worrisome. A BIS study found a link between age demographics and inflation: “A larger share of young and old in the population is associated with higher inflation.” 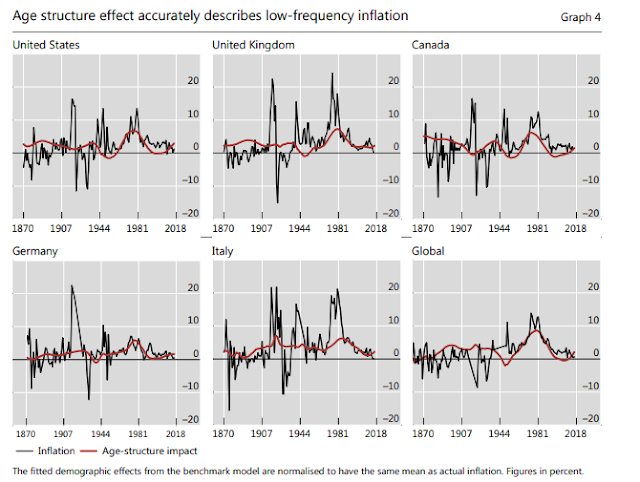 As the population of advanced economies ages, inflation pressures from demographics will present a challenge for policy makers in the coming decades. 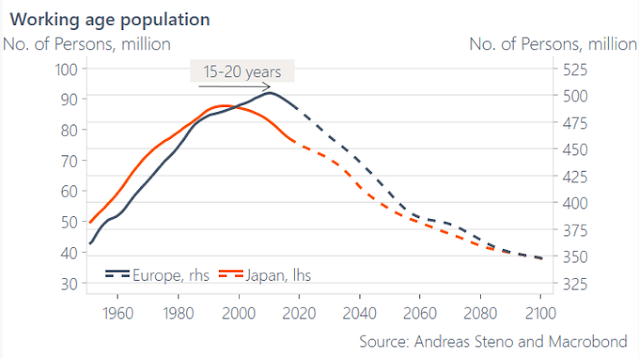 Notwithstanding the long-term problems of inflation, the Fed has made it clear that bringing inflation back to its 2% target is its primary focus. The September Summary of Economic Projections (SEP) is a succinct outline of its economic projections and expected policy response.
The changes in projections from the June SEP to September SEP highlight the broad outline of the Fed’s thinking: 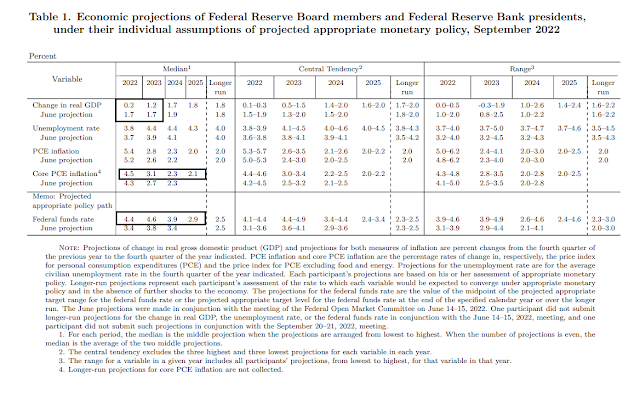 Reuters reported that the theme of frontloading rate hikes is consistent with what was voiced by St. Louis Fed President James Bullard:

A “hotter-than-expected” September inflation report doesn’t necessarily mean the Federal Reserve needs to raise interest rates higher than officials projected at their most recent policy meeting, St. Louis Fed President James Bullard said on Friday, though it does warrant continued “frontloading” through larger hikes of three-quarters of a percentage point…
After delivering a fourth straight 75-basis-point hike at its policy meeting next month, Bullard said “if it was today, I’d go ahead with” a hike of the same magnitude in December, though he added it was “too early to prejudge” what to do at that final meeting of the year.
If the Fed follows through with two more 75-basis-point hikes this year, its policy rate would end 2022 in a range of 4.50%-4.75%.

San Francisco Fed President Mary Daly said Friday, just ahead of the media blackout ahead of the FOMC meeting, that she wants to avoid putting the economy into an unforced downturn by overtightening, “I want to make sure we don’t overtighten just much as I want to make sure we don’t undertighten.” She added that the SEP Fed Funds rate forecast, which amounted to a 75 bps hike in November and followed by 50 bps in December, was a “good projection” and argued for rate hikes to slow to a 50 or 25 bps pace after the November meeting.
Current market expectations calls for a terminal rate of under 5% in 2023, with easing to begin late in the year. This is consistent with the Fed’s stated course that it will pause but not ease prematurely because of the fears of a policy error that ignites a 1970’s style inflationary spiral. 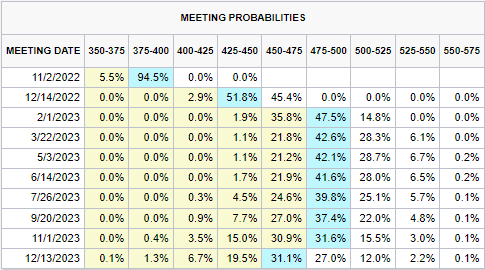 Despite all of the angst about broadening inflation dynamics, an analysis of the underlying trend indicates that inflation is peaking and will decelerate in the near future.
A disaggregation of PCE inflation trends shows that the inflation shock is mainly attributable to COVID-19 and the Russo-Ukraine War. Moreover, much of the supply-driven inflation is starting to diminish and roll over.

As for the hot September CPI report that came in ahead of expectations and rattled markets, the overshoot can be attributable to Owners’ Equivalent Rent (OER), which is a large weight in CPI. An analysis of core CPI ex-OER shows a clear trend of deceleration.

OER is a lagging indicator, which is a problem for Fed policy makers. Paul Krugman pointed out that an analysis from Goldman Sachs found that average alternative metrics of rental rates show that rents are rising at about 3% and decelerating, compared to the accelerating September BLS OER rate of 6.8%. 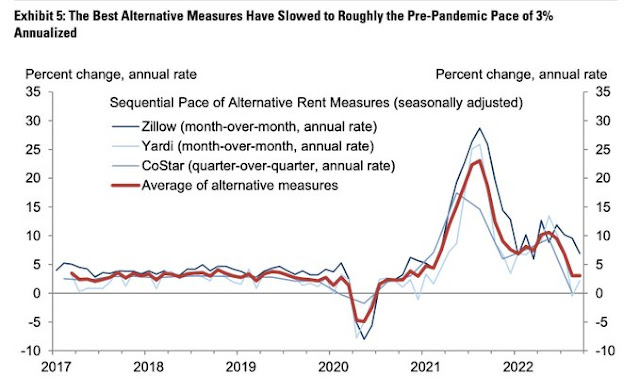 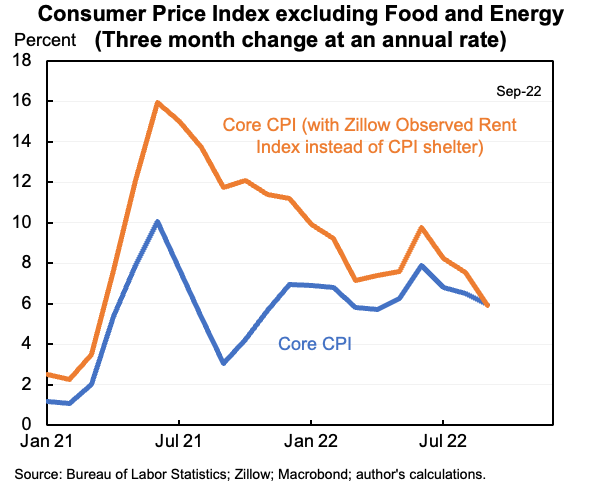 As for the Fed’s fears of a 1970’s style wage-price spiral, relax. Wage increases are starting to top out. While job switchers are enjoying better raises than job stayers, which is an indication of a tight labor market, the rate of increase for both switchers and stayers is rolling over. 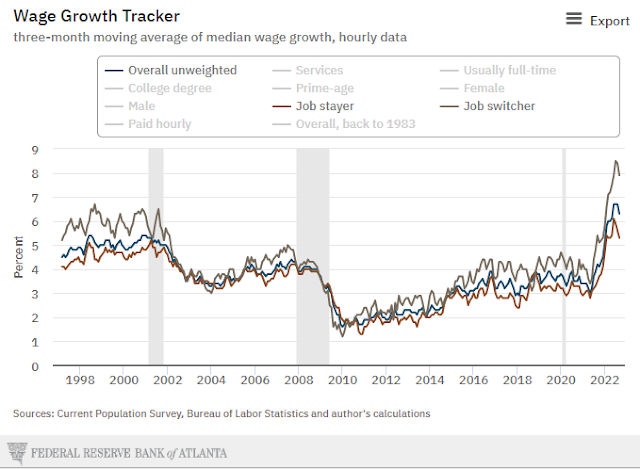 Moreover, an IMF study concluded that wage-price spirals are rare. 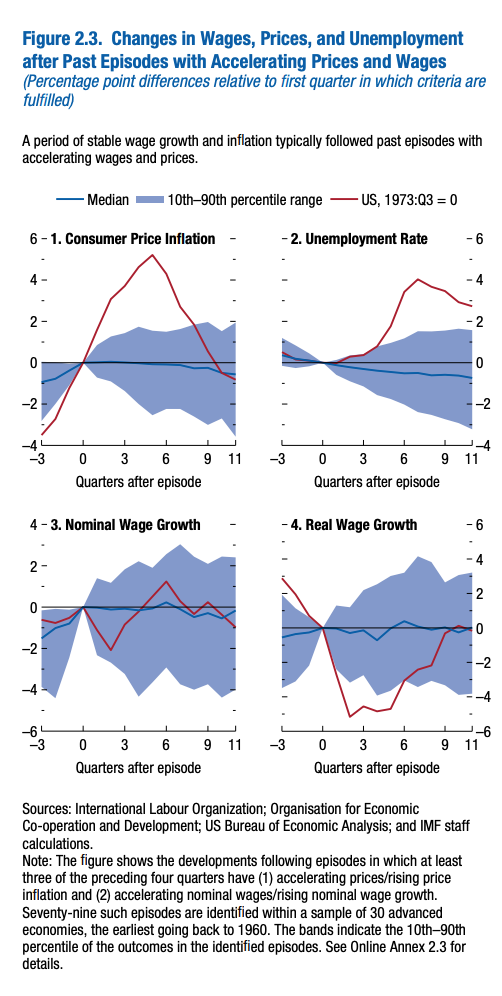 None of this means that the Fed should pivot from tightening to easing, but it does mean that inflationary pressures are starting to ease and an interest rate pause should be closer than the market expects. I would argue that the Fed is fighting the wrong war by targeting wage inflation. The main enemy during the inflationary 1970’s was the enormous power they wielded by unions and the Fed was correct in breaking the wage-price spiral then. The policy problem today should be the ability of companies to raise their prices in response to inflationary pressures. Pretax margins fell during the 1970’s when inflation rose. Today, margins are rising in lockstep with inflation as corporations have been able to pass through price increases.

It’s become all one trade

Here is what all this means for investors. The intense market focus on Fed policy has translated into a single one-factor Fed policy factor trade.
The Fed’s balance sheet (blue line) is inversely correlated to real 10-year Treasury yields (red line).

The Fed’s balance sheet (blue line) is also inversely correlated to the trade-weighted dollar (red line, inverted scale) as Fed tightening has driven up the USD and exported inflation abroad.

Finally, the S&P 500 (red line) is highly correlated to the Fed’s balance sheet (blue line). By extension, it has become all the same factor trade – liquidity, real yields, the USD, and stock prices.

Here is a chart of the USD Index since 1980 along with its 20-month Bollinger Band and the S&P 500. Past overbought episodes of the USD have occurred during periods of positive correlation with the S&P 500. The current period is highly unusual inasmuch as it is occurring during a period of S&P 500 weakness for the reasons already cited. The greenback is very extended and fault lines are appearing around the world. Japan and China have intervened to stabilize their currencies, and the UK has experienced funding stress. Either an inflation or crisis driven pivot should occur in the near future. 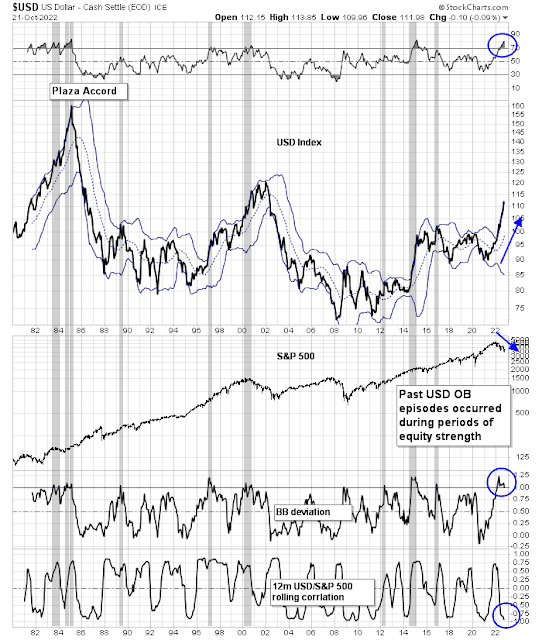 I began this publication by rhetorically asking the question of how investors should adjust their portfolios in response to high inflation. The analysis from JPM Asset Management outlines how asset classes perform in different inflation environments. 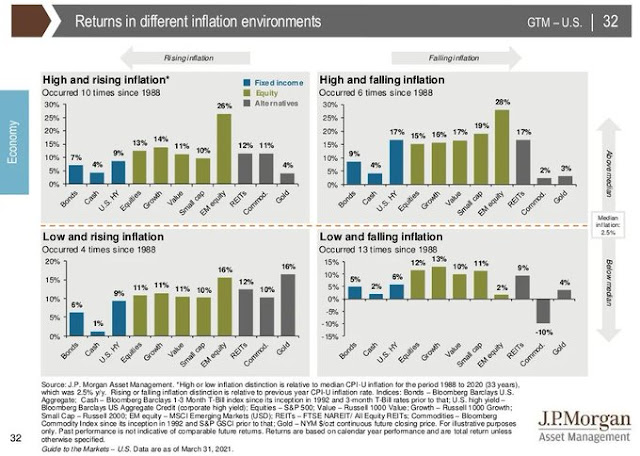 Jim Paulson at Leuthold Group further analyzed the S&P 500 during rising and falling inflation under high, medium, and low inflation regimes. If my analysis of decelerating inflation is correct, the S&P 500 is about to undergo a period of strong returns in the coming months. 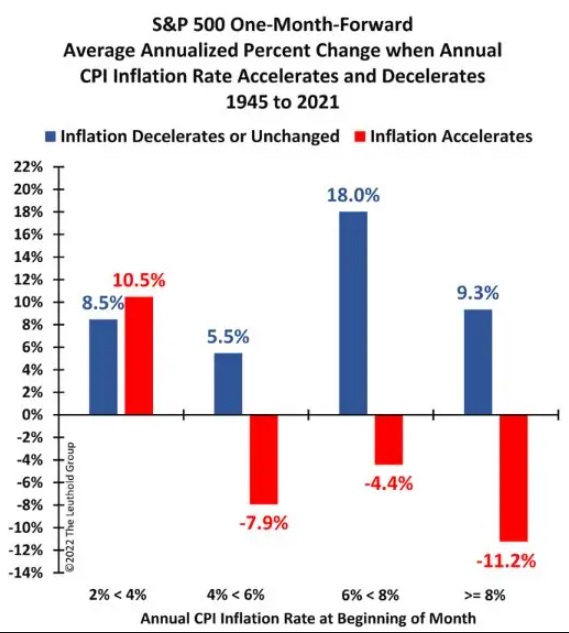 In conclusion, rising inflation has played havoc with 60/40 portfolios as bond prices haven’t provided a counterweight to falling stock prices. A study reveals that underlying inflation trends are decelerating. which should be positive to risk appetite expectations. The inflation and market pivot is just around the corner and it may be closer than the market expects.

8 thoughts on “How inflation is a game changer for portfolios”