Liftoff? – Humble Student of the Markets

Mid-week market update: Recent discussions with readers made me realize that many investors may have become so numb to the endless bearish stock market impulses that they don’t realize how oversold the stock market is. I have highlighted in the past the chart of the NYSE McClellan Summation Index (NYSI) to demonstrate that a reading of under -1000 is rare and historically led to tactical rebounds. 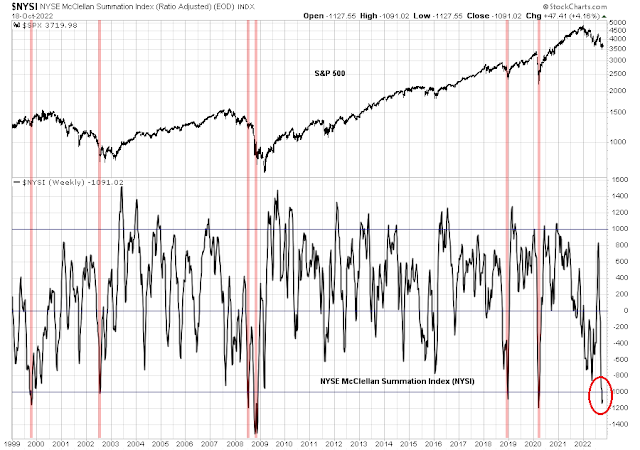 But that’s not the full story. Here is the NASI, which is the NASDAQ version of NYSI. Readings of -1000 are a bit more frequent, but they have led to tactical rebounds with the single exception of the episode in late 2000. 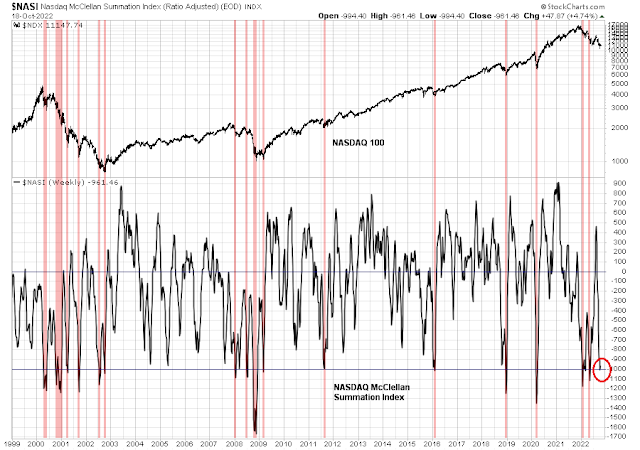 The S&P 500 weekly Williams %R, which is another overbought/oversold oscillator, recently recycled from a deeply oversold reading of -100. While this indicator has shown itself to be an inexact trading signal, it also signaled a deeply oversold condition that has usually resolved in tactical rebounds. 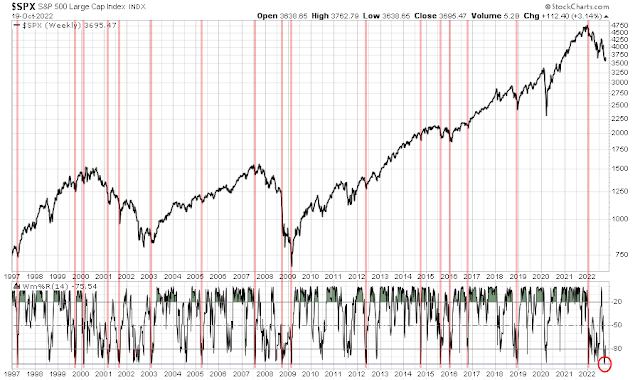 The 5 dma of the percentage of the S&P 500 with bullish patterns on point and figure charts recently fell below 15% before recovering. While historically these signals were slightly early, they have nevertheless indicated a positive risk/reward ratio for bullish positions in the past. 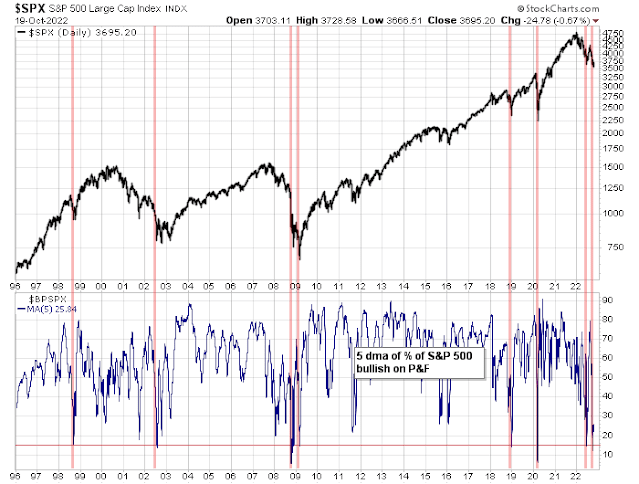 The percentage of NASDAQ stocks above their 200 dma fell below 10% and recovered. These are all signs of a deeply oversold market by any historical measure. 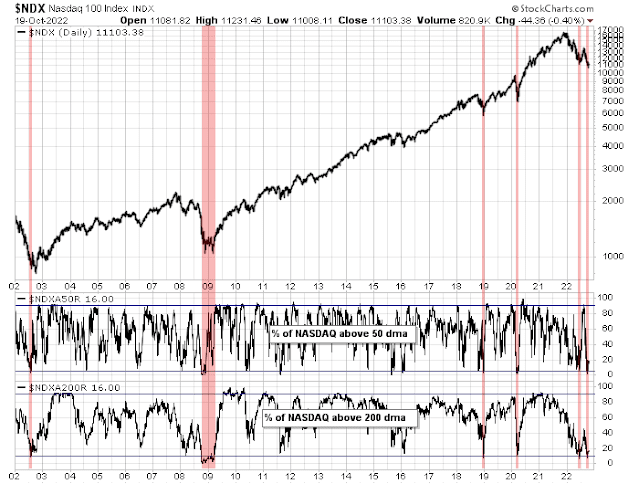 The percentage of S&P 500 stocks above their 50 dma experienced a breadth wipeout in June by falling below the 5% level but recovered to over 90% in a brief period. In the past, such breadth thrusts have always signaled the start of a fresh bull leg – except that the latest buy signal failed and the indicator retreated below 5%. The closest template of current conditions may be the 2008-2009 period. While this indicator did not fail by flashing a buy signal and weaken during that period, it did flash a positive divergence by exhibiting a higher low. So did the percentage of the S&P 500 above their 20 dma. I interpret this to be a constructive sign for the bulls. 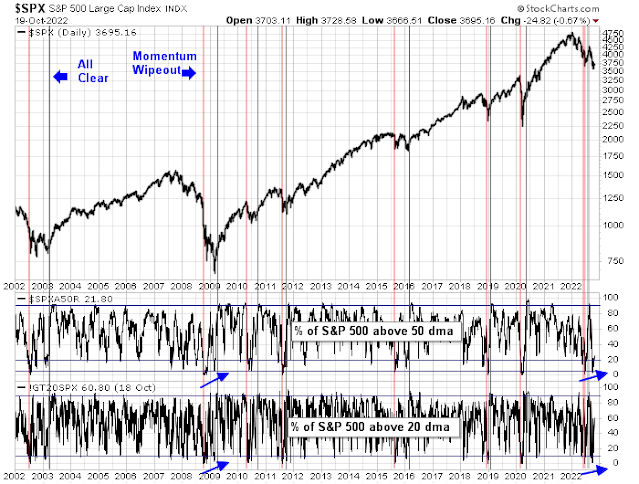 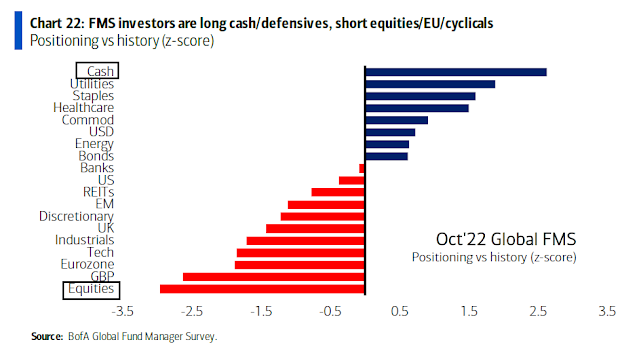 The New York Post featured the losses in the average 401k account this year as a contrarian newspaper cover indicator. 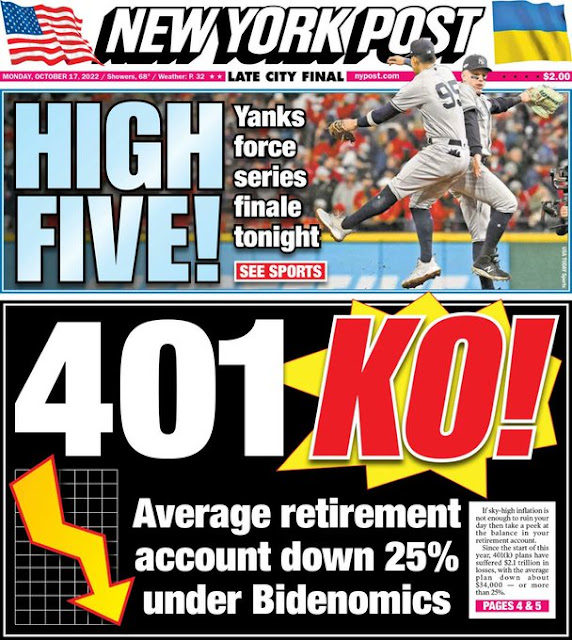 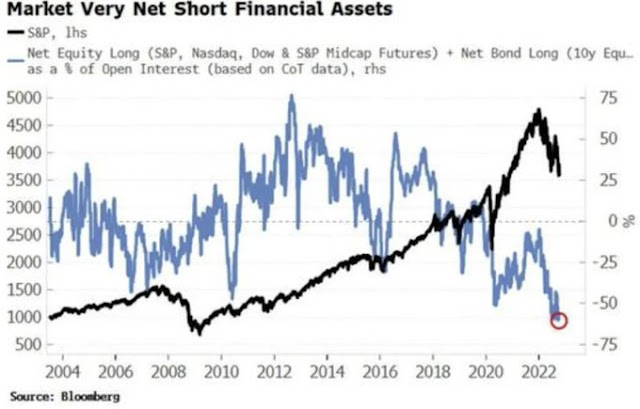 The lack of risk appetite is confirmed by Goldman Sachs prime brokerage, which reported net equity positioning at fresh lows. 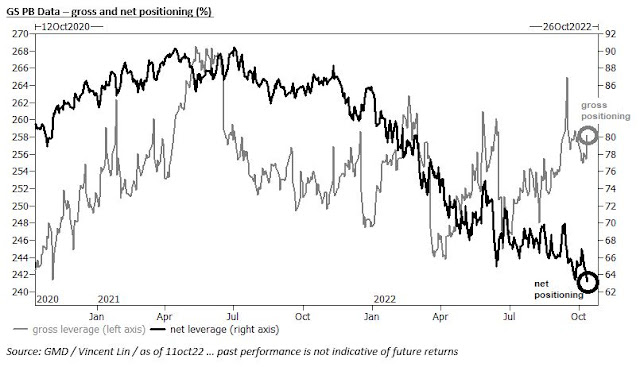 The market just needed a catalyst for a risk-on liftoff. From a technical perspective, the usually reliable S&P 500 Intermediate-Term Breadth Momentum Oscillator (ITBM) just flashed a buy signal when its 14-day RSI recycled from an oversold condition to neutral. There have been 26 such signals in the last five years and 22 have resolved bullishly. The current buy signal is reminiscent of the September 2021 period when the RSI indicator weakened from neutral back to oversold soon after the buy signal. The final buy signal eventually succeeded and the index rallied about 10% on a trough-to-peak basis, which would come to about 3940 on the S&P 500. 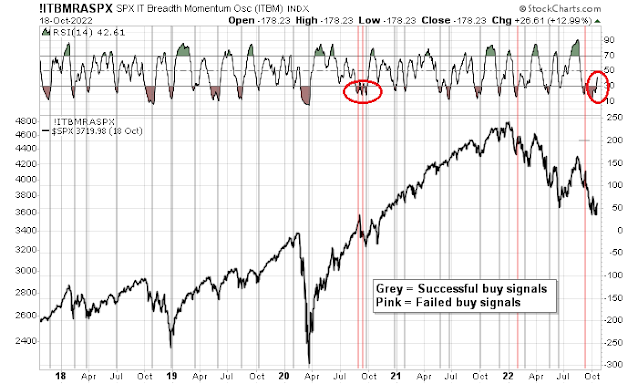 From a fundamental and macro perspective, the bullish catalyst could be attributable to two possible factors. The most obvious is the British government’s about-face on its fiscal plan, which sparked a relief rally in the gilt market and Sterling.
Less noticed but equally important is the prospect of better liquidity in the Treasury market. In the wake of concerns expressed by Treasury Secretary Janet Yellen about diminished Treasury market liquidity, Reuters reported that the US Treasury asked banks if it should buy back Treasuries to improve UST market liquidity. Joseph Wang, otherwise known as the Fed Guy, explains:

Treasury buybacks would be a powerful tool that could ease potential disruptions arising from quantitative tightening. The Treasury hinted in their latest refunding minutes of potential buybacks, which is when Treasury issues new debt to repurchase old debt. Buybacks can be used to boost Treasury market liquidity, but more importantly also allow Treasury to rapidly modify its debt profile. By issuing bills to purchase coupons, Treasury could strengthen the market in the face of rising issuance and potentially structural inflation. An increase in bill issuance would also facilitate a smooth QT by moving liquidity out of the RRP and into the banking sector.

Better UST liquidity would be a step to offset the bearish factors posed by the Fed’s QT program.

Investors face a number of key risks to any risk-on rally.

Federal Reserve officials have coalesced around a plan to raise interest rates by three-quarters of a point next month as policymakers grow alarmed by the staying power of rapid price increases — and increasingly worried that inflation is now feeding on itself.
Such concerns could also prompt the Fed to raise rates at least slightly higher next year than previously forecast as officials face two huge choices at their coming meetings: when to slow rapid rate increases and when to stop them altogether. 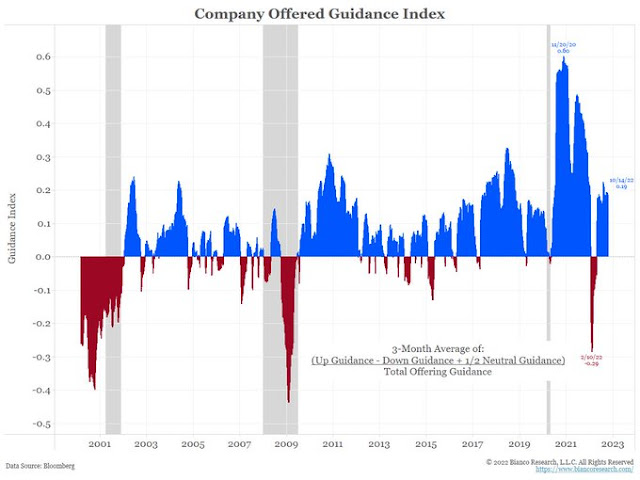 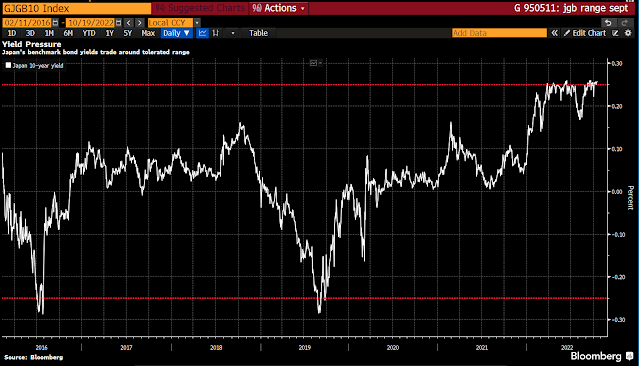 In conclusion, these violent market swings tend to be bear market characteristics and my base case scenario for this latest advance is a bear market rally.

How far can the rally run? Assuming that this is a sustained bear market rally and not a two-day wonder, a 10% rebound would take the S&P 500 to about 3940, while the first Fibonacci retracement level is about 3990. The rally will encounter strong resistance at about 4140, which is the intersection of the falling trend line and the 50% retracement level.