Both the Fed and FedEx had messages of recession for the markets. Fed Chair Jerome Powell said that the Fed would raise rates until there was clear and convincing signs that inflation was headed toward its 2% target, and its projections amounted to a recession that begins either late this year or early next year. FedEx warned about a slowdown in global shipping volumes and recessionary conditions. 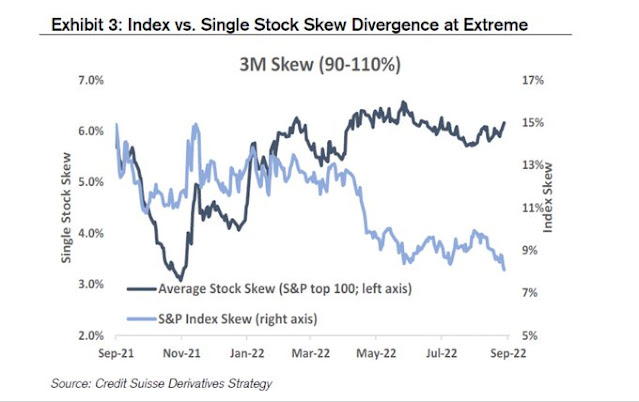 Still, a review of the risks shows that not all is at it seems below the surface. 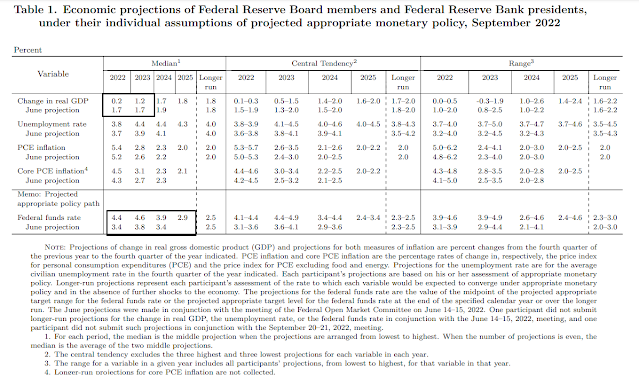 Even though the Fed can’t be seen to call for a recession, a recession is implicit in the Fed’s forecast. How can GDP growth slow to 0.2% by December 2022 and rise to 1.2% by December 2023 when the Fed is raising rates and keeping them elevated for all of next year? Moreover, former Obama CEA Chair Jason Furman pointed out that the Fed’s unemployment forecast would trigger the Sahm Rule recession tripwire. 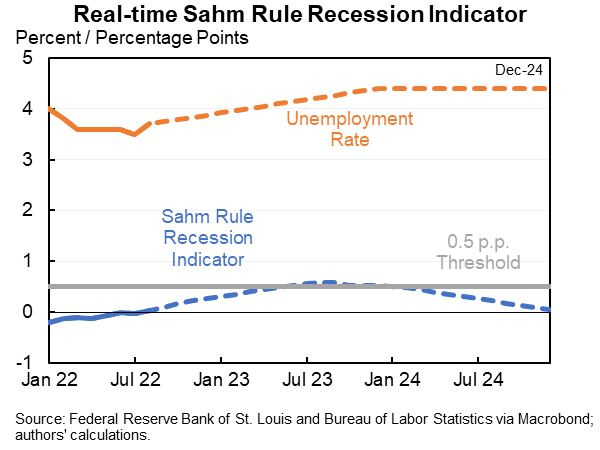 The market reflexively went risk-off in the wake of the FOMC meeting as it began to discount a recession. New Deal democrat, who maintains a discipline of using coincident, short-leading, and long-leading indicators to forecast economic growth, isn’t now pondering whether there will be a recession, but how deep it will be.

Suddenly there are a lot of things for me to write about; including not just if there will be a recession, but also how deep and how long it might be. The longer the Fed goes on raising rates, the more I think it may turn into a bad, deep recession.

Alfonso Peccatiello, who writes as Macro Alf, went back 100 years and looked at all 16 U.S. recessions during that time. In all 11 episodes when we entered a recession with inflation above 3%, the resulting sharp economic slowdown did bring inflation down.  On average it took 16.2 months to slow CPI from peak back to 2%. The peak-to-trough reduction in CPI was -6.8%. Based on his projections, this recession should end in late 2023. 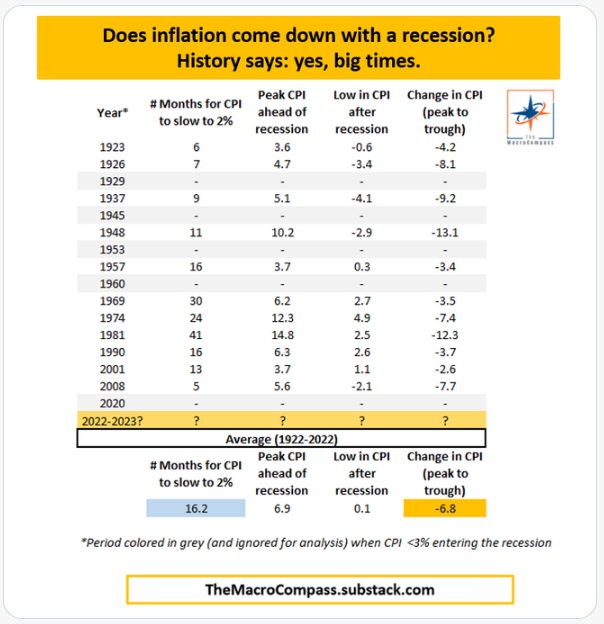 Global volumes declined as macroeconomic trends significantly worsened later in the quarter, both internationally and in the U.S — We’re seeing that volume declined in every segment around the world, and so you know, we’ve just started our second quarter. The weekly numbers are not looking so good, so we just assume at this point that the economic conditions are not really good. We are a reflection of everybody else’s business, especially the high-value economy in the world.

The slowdown is especially evident in China, but global container shipping rates have been falling since late 2021 and the collapse began to accelerate at the end of Q1 2022. 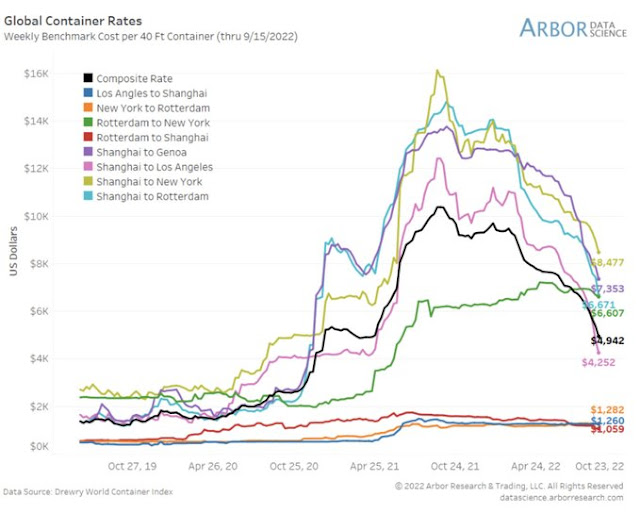 However, not all is gloom and doom. Demand has shifted from goods, which affects shipping companies like FedEx, to services. Bank of America CEO Brian Moynihan revealed in an earnings call that the American consumer is still spending.

In the month of August 2022, consumers spent 10% more than they spent in August 2021 — customers are spending more. They have – the amount of money and accounts is not going down. It’s been relatively flat — They’re spending it at a good clip. Their capacity to borrow. All credit cards are still enough to where they were in the pandemic. Our home equity loans are still down and you look across the industry capacity to borrow. So the consumer is in very good shape. And you sort of say, why is that true in the discussions with various people, it’s pretty simple. They’re getting employed.

So I think the best way to describe consumer spending right now is stable, and that’s what we see in our numbers. There’s been some shifts in the way consumers are spending, what they’re buying, and where they’re spending. But, overall spending has been remarkably stable, both in the United States here and for the most part around the world.

VISA CFO Vasant Prabhu explained that the weakness in FedEx results can be explained by a shift in demand from goods to services:

If you look across categories, as you might expect, people have switched from, as they say, buying things to doing things. And sort of buying goods, people are into experiences. Travel is booming as you might know from having flown yesterday. Hotels, airlines, and entertainment is doing well, restaurants are doing well. There’s no obvious difference between high-end consumers and lower-end consumers. They may be buying different things, but nominal levels of spending have stayed quite stable, and that’s largely true around the world.

We can see the shifts in demand in different categories of PCE. While Services PCE (blue line) has been remarkably stable, durables goods PCE (red line) has been extremely volatile during the pandemic and post-pandemic period, and nondurable goods PCE (green line) less volatile. The FedEx warning is reflective of the sudden downdraft observed in durable goods PCE, or the “transitory inflation” effect. The disaggregation of PCE components also shows the Fed’s dilemma. PCE inflation rates remain stubbornly elevated, which may prompt Fed officials to over-tighten and send the economy into a deep recession.

This analysis indicates that investors will need to be prepared for volatility from different parts of the market. While services companies are more likely to meet or beat Street expectations, companies involved in goods production and their transportation are prone to disappointment.
The outlook for long-term corporate profitability is even worse. Fed research Michael Smolyansky published a note which concluded that much of the increase in net margins can be explained by falling interest expenses and lower tax rates, which are unlikely to continue.

Over the past two decades, the corporate profits of stock market listed firms have been substantially boosted by declining interest rate expenses and lower corporate tax rates. This note’s key finding is that the reduction in interest and tax expenses is responsible for a full one-third of all profit growth for S&P 500 nonfinancial firms over the prior two-decade period. I argue that the boost to corporate profits from lower interest and tax expenses is unlikely to continue, indicating notably lower profit growth, and thus stock returns, in the future. 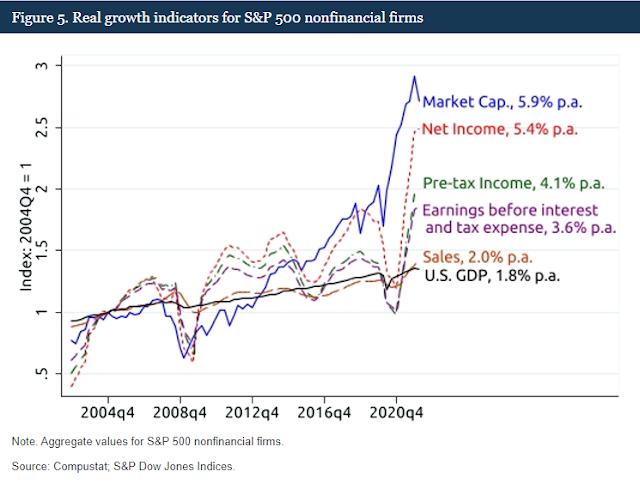 In the short-term, the latest update from FactSet shows weekly EPS revisions falling across all time frames, which is bearish sign for equity fundamentals. 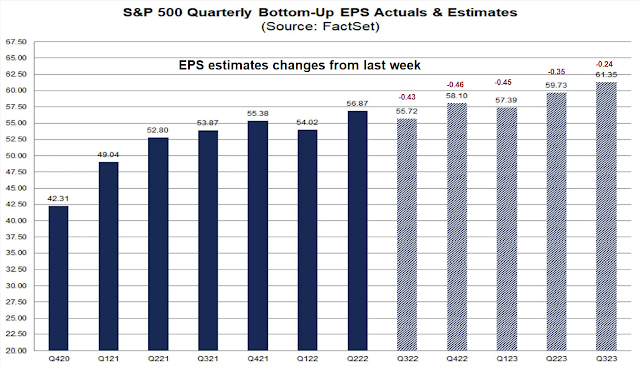 Putting this all together, these developments have ominous implications for equity market returns. The Fed is tightening policy, which is negative for equity valuation. A recession is on the horizon, which is bearish for the earnings outlook. Q3 earnings season could see some bifurcation as the goods-producing sector faces challenging conditions while services remain strong.
A non-linear thinker may conclude that while the equity market outlook may be bearish short-term, market history shows that the Fed always pivots in the face of a financial crisis. While US corporate and household balance sheets are strong, the same can’t be said overseas. Europe is already in recession, and China is probably in a recession. I am monitoring the stock market performance of regional markets for signs of a bottom and turnaround. In particular, Europe is extremely vulnerable to a financial crisis that would prompt global central bankers to ride to the rescue and ease policy. 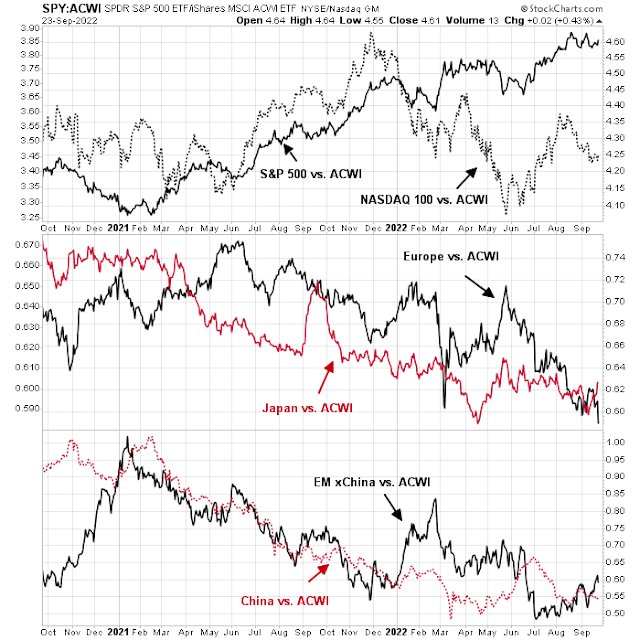