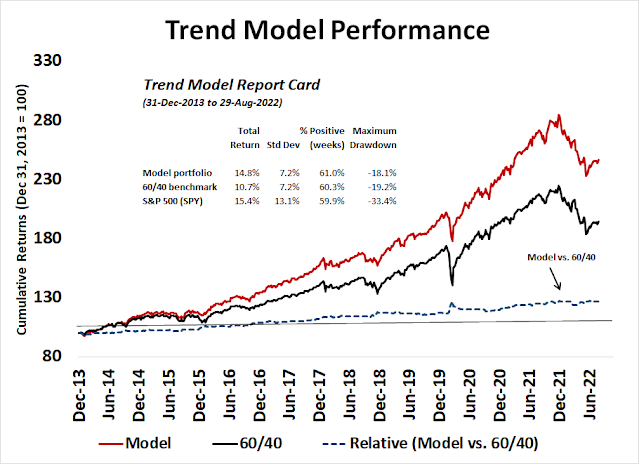 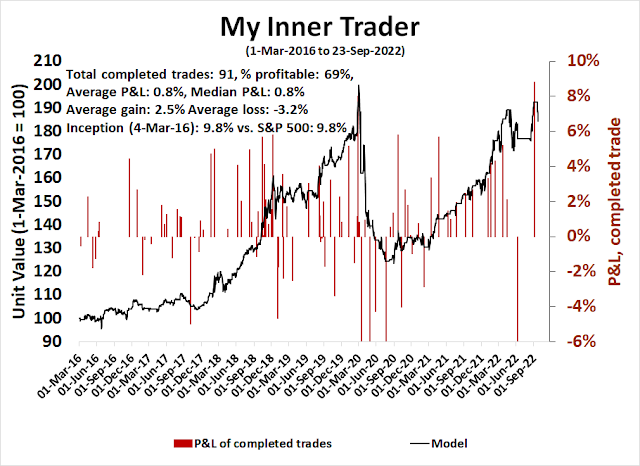 In the wake of the post-FOMC meeting downdraft, three of the four components of my bottom spotting models flashed buy signals.

In the past, buy signal counts above two have indicated bullish risk/reward conditions for stock prices. 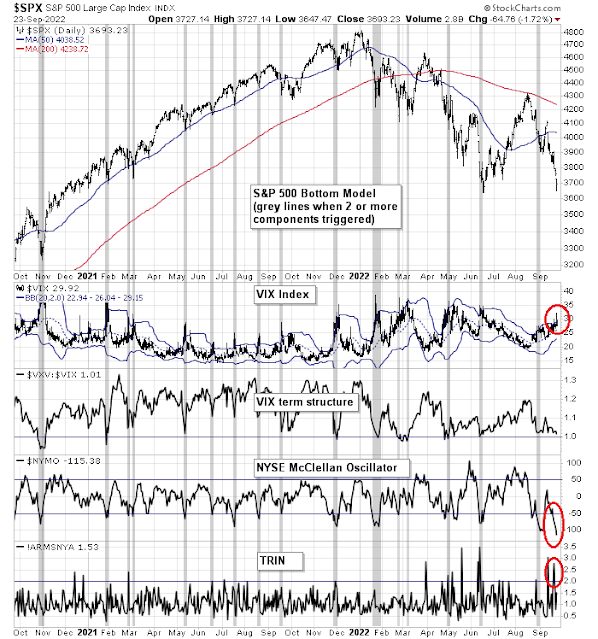 Other sentiment models are also pointing to crowded short conditions. In many ways, traders had already thrown in the towel even before the FOMC meeting, which is likely to put a floor on stock prices. But there is a right way and a wrong way to throw in the towel.

Numerous signs have appeared of a sentiment washout. The BoA Global Fund Manager Survey, which was conducted September 2-8, 2022, showed equity positioning at a record low. 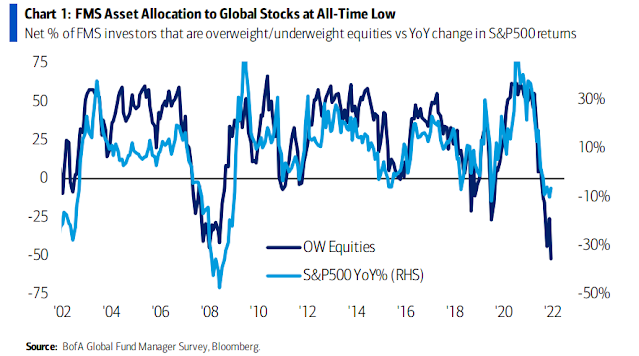 The AAII weekly sentiment survey showed that the bull-bear spread and bearish sentiment readings were only exceeded at the 1990 and 2008 market lows. Bearishness today is even worse when compared to the aftermath of the 1987 market crash. 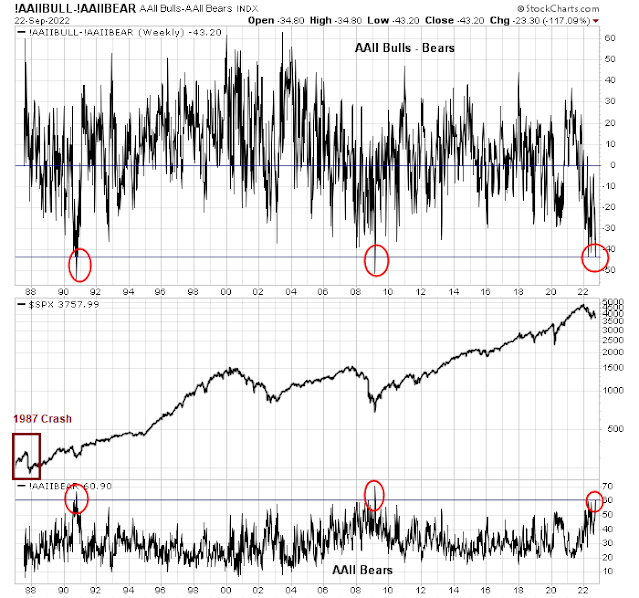 I recognize that the AAII survey is flawed because of a small sample size and a varying composition of respondents, but Ryan Detrick compiled the historical returns of the S&P 500 after AAII bears exceeded 60%. The instances were rare (n=4), but subsequent returns were strong across all time horizons. 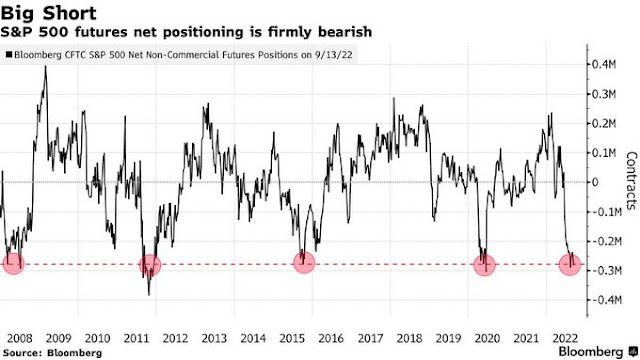 In a report published on September 20, 2022, which was before the FOMC meeting, Mark Hulbert observed that his Hulbert Nasdaq Newsletter Sentiment Index dipped in the bottom decile of sentiment readings. 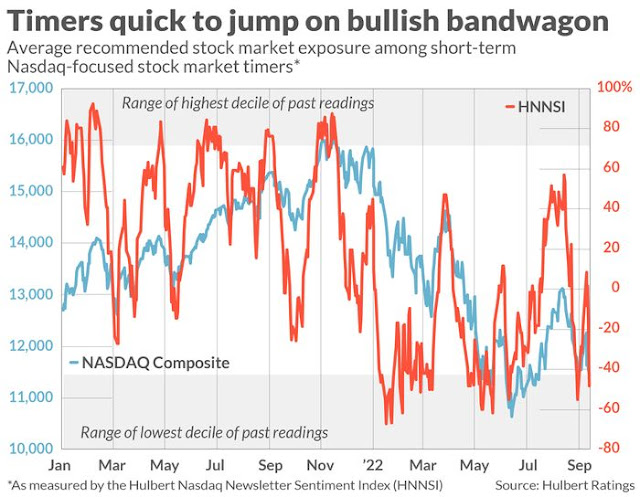 The wrong way to throw in the towel

Despite the apparent signs of excessive bearishness, Hulbert had a warning for investors.

A new bear-market low is likely still in the cards for U.S. stocks, for two contrarian-related reasons:
First, at no point in the current bear market has there been the deep pessimism and despair that frequently accompanies major bottoms — what many refer to as capitulation, or throwing in the towel.
Second, whenever even moderate pessimism has emerged, it has been short-lived; investors instead have been eager to jump on the bullish bandwagon at the mere whiff of a possible rally.

Jurrien Timmer at Fidelity pointed out that for all the talk about excessive bearishness, fund flows aren’t showing signs of capitulation. That said, the latest fund flow reports indicate that investors pulled money from all asset classes and money market fund assets swelled, but that may be only a blip and not evidence of protracted panic. 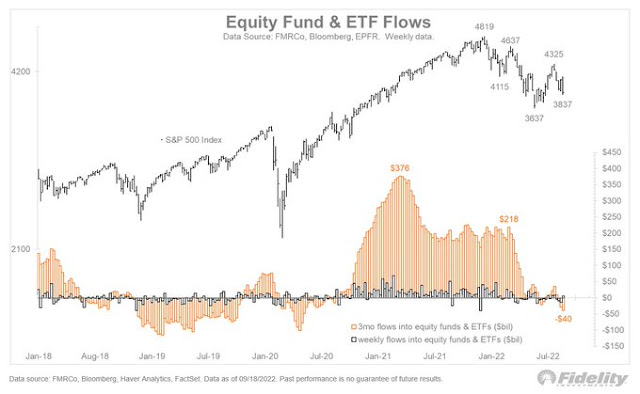 Equally disturbing is the lack of insider buying. A monitor of insider activity shows that insider buying (blue line) hasn’t exceeded insider selling (red line) as it did during incidents of market weakness this year. 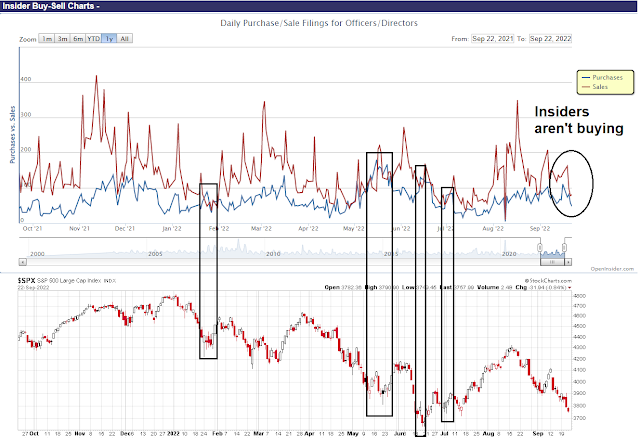 Option sentiment presents a mixed picture. On one hand, the VIX Index remains below the target zone of 33-36 where the market has bottomed in the past. On the other hand, put/call ratios have spiked to fresh highs and the 10 dma of both the CBOE put/call ratio and equity-only put/call ratio are consistent with levels reached at the June bottom. 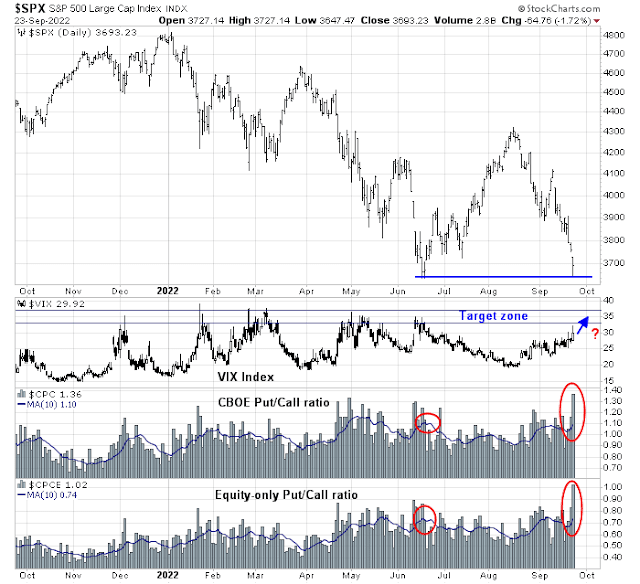 I interpret these readings in two ways. The signs of excessive bearishness are short-term in nature, which is likely to put a floor on stock prices as they weaken. In other words, the market is poised for a relief rally.
On the other hand, the bearish factors are more intermediate-term in nature. Barring a bullish macro or fundamental catalyst, the path of least resistance is still down after any counter-trend bounce (see yesterday’s publication What the Fed and FedEx are telling the markets).
Technical analysts virtually all turned universally bullish after the strong momentum thrust off the June low when the percentage of S&P 500 stocks above their 50 dma surged from below 5% to over 90%. Since then, price momentum has fizzled and readings have returned to oversold again, indicating a failed breadth thrust. 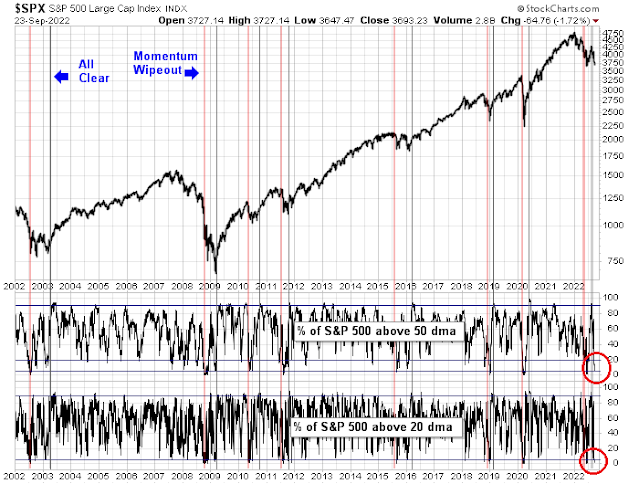 Willie Delwiche also pointed out that global breadth, as measured by the percentage of individual markets above their 200 dma, is low at 17%. The moral of this story is not to over-rely on sentiment or any single model. Wait for confirmation from other uncorrelated models before making an investment decision. 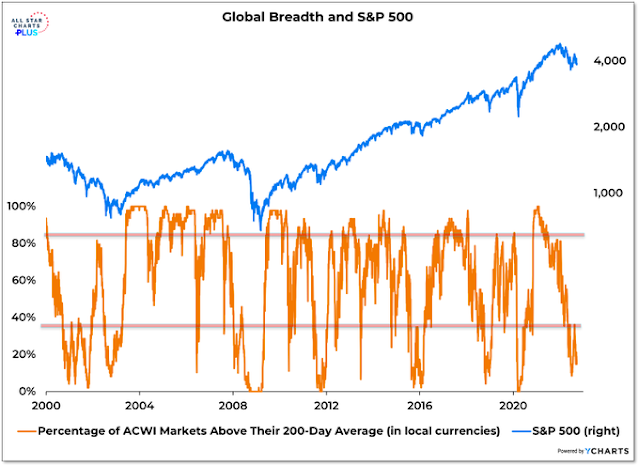 In conclusion, sentiment readings and technical conditions are sufficiently washed out that a relief equity rally can happen at any time. However, the intermediate-term direction is still down. Prepare for the bounce, but don’t forget to sell the rips. 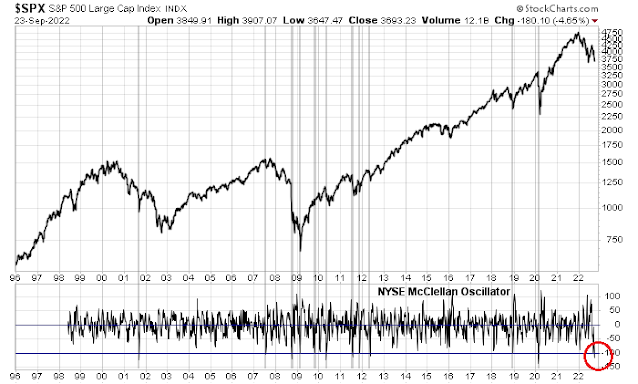