What if the market bottomed and no one realized it? – Humble Student of the Markets

It’s stunning how market psychology has changed. In the space of a few months, we’ve swung from “everyone is bullish” to “everyone is bearish”. These results from the BoA Global Fund Manager Survey were done in early June and sentiment has likely deteriorated since then. 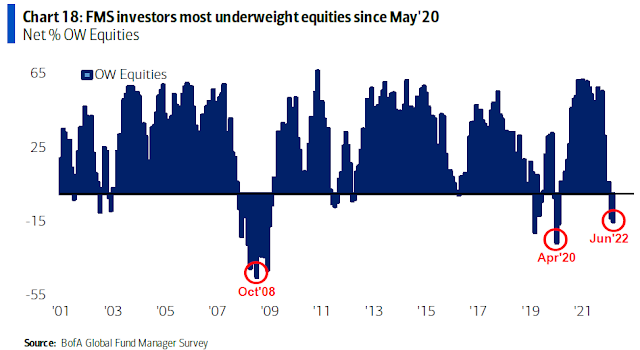 The good news is the market is becoming numb to bad news. What if the stock market bottomed and no one actually realized it?

The bears throw a party

The bears are throwing a party and there’s no shortage of bad news. From a global perspective, ASR’s New Orders PMI 12-month diffusion indicator, which is composed of 24 country PMIs, is cratering. 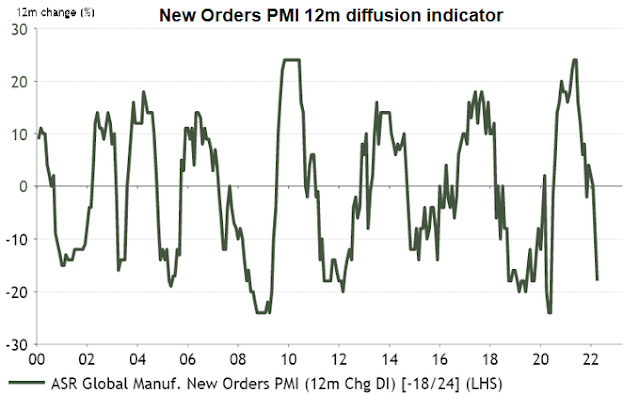 In the US, the yield curve has flattened and the 2s10s spread has slightly inverted, which is usually interpreted as a recession warning. 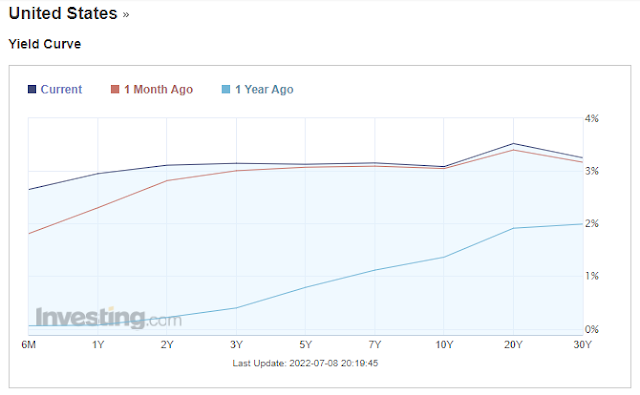 The June Jobs Report solidified the Fed’s tightening path. Non-Farm Payroll came in ahead of expectations at 372K jobs, and average hourly earnings printed a slight beat at 5.1%. This is a picture of a strong labor market. More ominously was the Diffusion Index. While the diffusion index for total private jobs stayed steady, manufacturing showed some signs of weakness.

Other leading indicators of the jobs market is showing signs of deterioration. Temporary jobs and the quits/layoffs rate from the JOLTS report have led Non-Farm Payroll, and both indicators are rolling over. This, along with the Diffusion Index, is pointing to the conclusion that the Fed is tightening into a slowdown.

I recently pointed out that as the macro backdrop deteriorates, the Q2 earnings season will be the acid test for the equity market. As investors await the start of earnings season, FactSet reported that the rate of negative guidance has been steadily rising, though levels are nowhere near all-time highs. 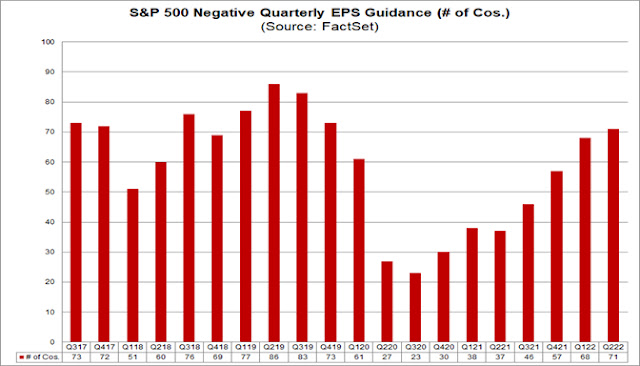 Across the Atlantic, Germany’s vaunted trade surplus has swung into deficit and dragged the eurozone down with it. The chief culprit has been the high cost of energy in the wake of the Russia-Ukraine war. 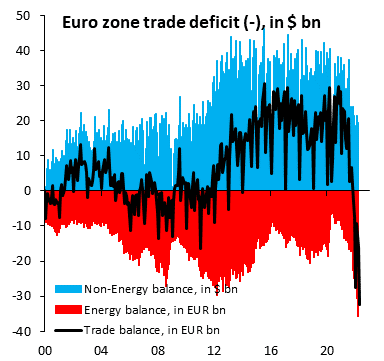 The French nationalization of electric utility EDF and the German bailout of Uniper are signs of the stresses appearing in Europe’s energy market. European electricity prices are potentially reaching a credit level event, especially if a bank or hedge fund is caught on the wrong side of electricity price hedges. 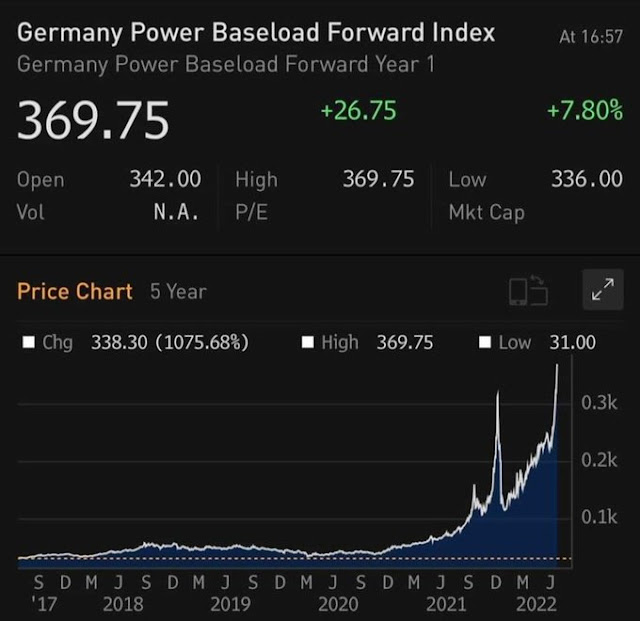 The credit default swaps of Credit Suisse skyrocketed last week, though the cause is unrelated to electricity hedging. For the uninitiated, CDS contracts are insurance policies that pay out if a borrower were to default on its debt. Arguably, this could be filed under “it’s so bad it’s good”. Central banks tighten until something breaks that threatens financial stability. Skyrocketing CDS rates are warning signs of cracks appearing in the system. 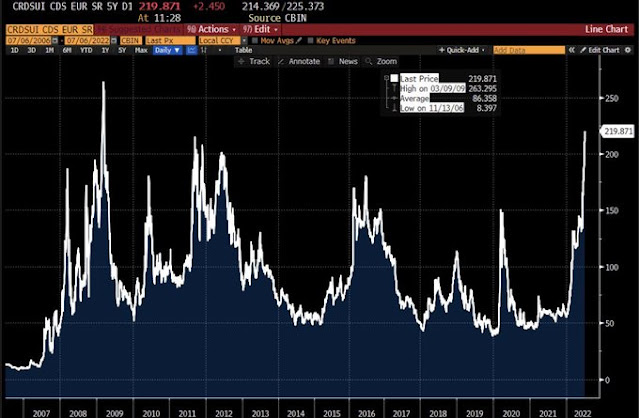 Over in Asia, Fathom Consulting makes the case that China is already in recession, though activity indicators are not as severe as what was seen during the first COVID Crisis. 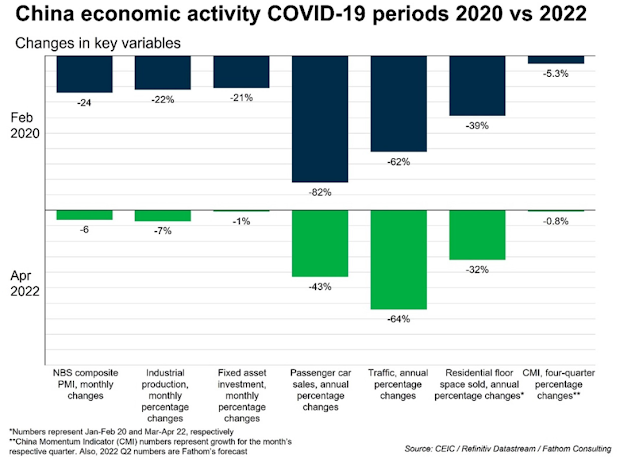 Keep an eye on commodity prices, which is also tells the tale of a sputtering Chinese economy. Beijing is considering a sale 1.5 trillion yuan (USD 220B) of local government bonds in the second half of this year to fund infrastructure projects. The success or failure of the latest stimulus program will be reflected in commodities. 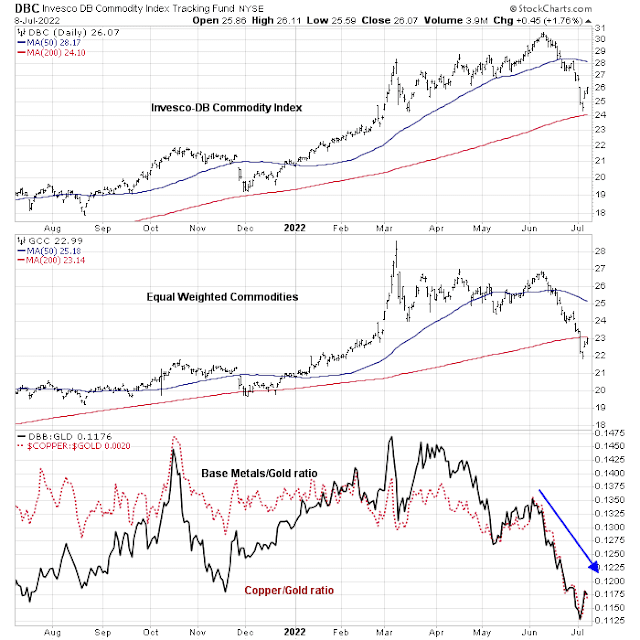 As the flood of bearish news continues, investors would expect the markets to take a risk-on tone. But market psychology is becoming increasingly numb to bad news.
For example, consider Fed Funds futures, which is discounting a series of rate hikes into year-end, followed by a pause in early 2023 and rate cuts by next summer. If markets look forward 6-12 months, are they anticipating the recession or the prospect of Fed easing? 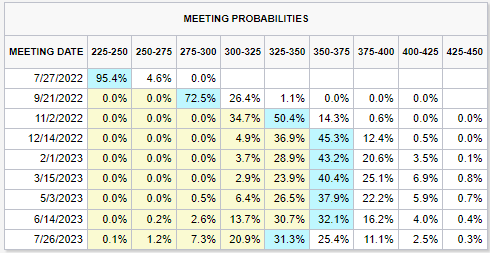 The 30-year Treasury yield may be peaking. Historically, peaks in the long bond yield has coincided or slightly preceded Fed rate cycle pauses. These readings are consistent with the expectation of a plateau in the Fed Funds rate in early 2023. 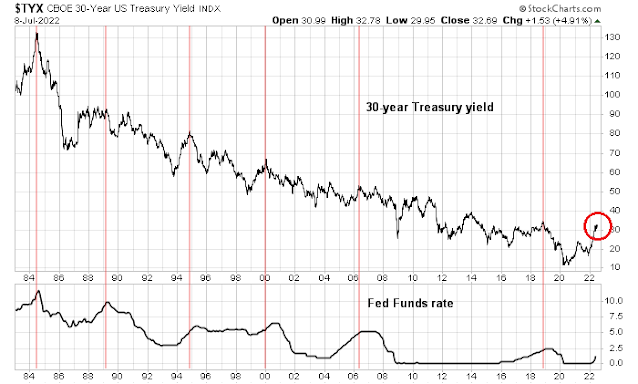 Even as recession fears spike, corporate insiders are stepping up and buying whenever the S&P 500 has weakened. While insider activity isn’t a precise market timing indicator, this group of “smart investors” are signaling that they are willing to look over any recessionary valley. 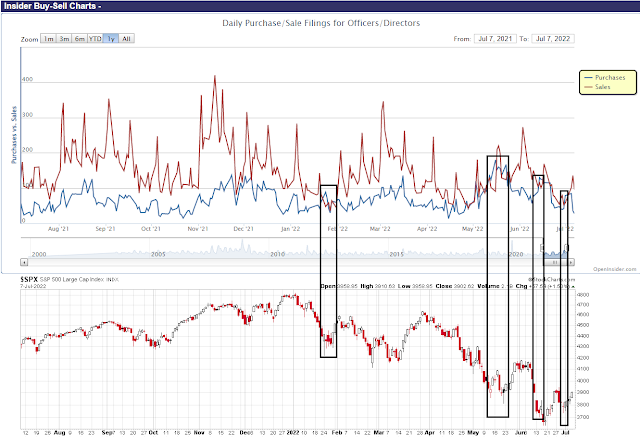 I previous made the point that the Q2 earnings season could be the acid test for equity prices. As negative guidance rises and growth slows, analysts are likely to cut their earnings estimates, which makes the forward P/E less attractive. While it’s difficult to anticipate how forward 12-month EPS estimates will evolve in the coming weeks, investors can see the relationship between the 10-year Treasury yield and trailing 12-month reported P/E ratio. S&P 500 trailing P/E is roughly in the same range as the last two times the 10-year Treasury yield was at these levels. Downside potential may be limited, especially if the economy either achieves a soft landing or experience a mild recession. 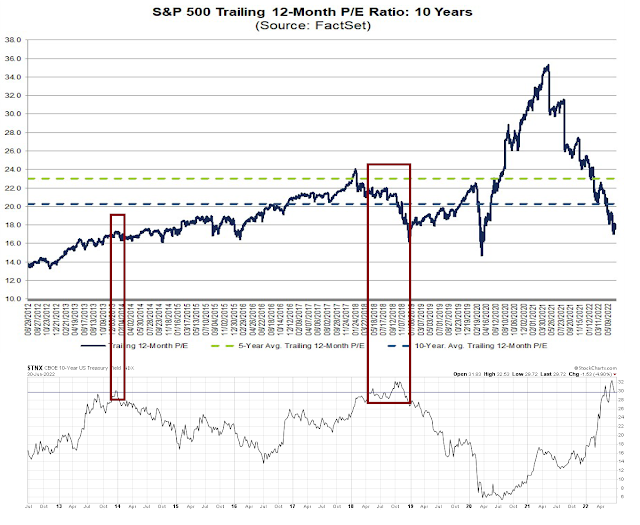 Technical analysis offers some clues about how market psychology has evolved. The percentage of S&P 500 above their 50 dma fell below 5% in mid-June, indicating a panicked extreme, and recycled back above 20%. There have been seven similar episodes in the last 20 years. The market made a V-shaped bottom on two of these occasions. In the other five, these oversold and recoveries were the signs of an initial bottom, followed by a re-test of the old lows within a few months. Only one (2008) saw a significant undercut of the initial low. All of the re-tests were marked by positive RSI divergences. These conditions are consistent with my past observation of a panic low in stock prices (see Why last week may ahve been THE BOTTOM). The odds favor a rally and re-test of the lows, though the historical record indicates that a V-shaped bottom has a probability of about 30%. 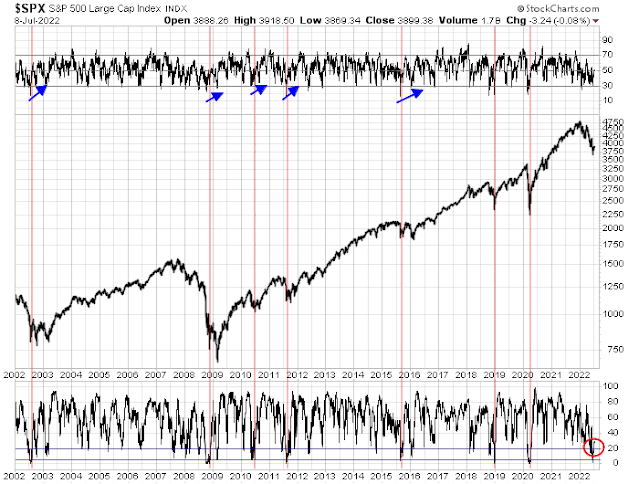 The rally and re-test scenario is consistent with the midterm election year seasonal pattern of a strong July followed by weakness and a low in September.

Finally, some readers have asked why the Trend Asset Allocation Model remains in a bearish signal if my analysis has become more constructive on the stock market. The Trend Asset Allocation Model is a model based on the application of trend-following principles on a variety of global stock markets and commodity prices, most of which are in downtrends. Trend following models are designed to spot durable trends and they are by design late at major tops and bottoms. Even if I am right about a market bottom, I don’t expect the Trend Model to turn more positive until a turnaround is more established. That’s a feature, not a bug.
This model has beaten a 60/40 benchmark during this latest bear episode, even though stock and bond prices have fallen together (detailed track record here). 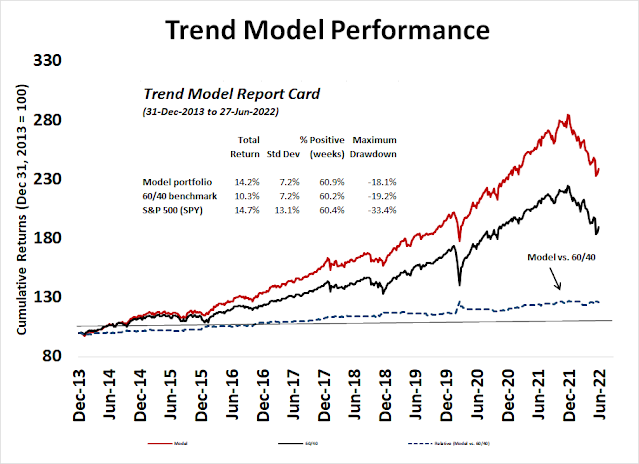 In conclusion, market psychology has taken a sudden shift from bullish to bearish as recession risks have surged, but the stock market has become increasingly numb to bad news. I interpret this to mean that equities are undergoing a bottoming process. Downside risk is limited and upside potential is high, though investors should be prepared for some short-term bumpiness.

13 thoughts on “What if the market bottomed and no one realized it?”