I am not always right and financial markets are facing many uncertainties, but last week’s market action may have marked the bottom of this market cycle.

It isn’t just the extreme level of the BoA Bull & Bear Indicator. though that is one piece of the puzzle. This indicator turned prematurely bullish by falling below 2 in March, but readings have declined to the extraordinarily low level of 0. 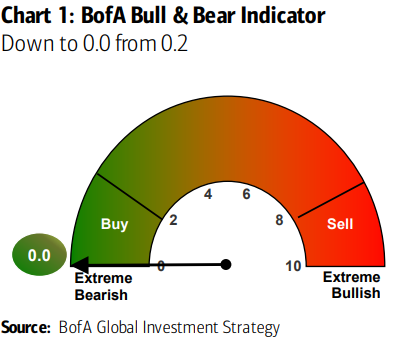 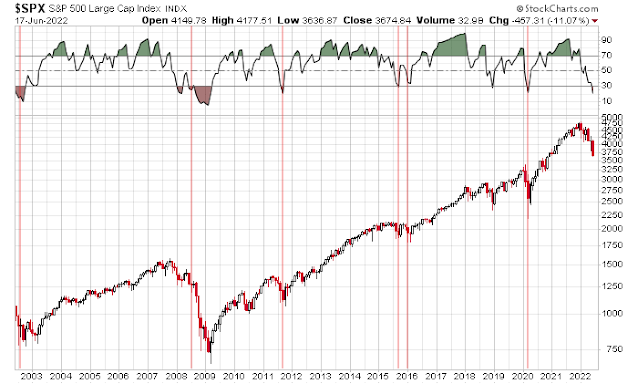 Many technical conditions are at levels seen at past major market lows. 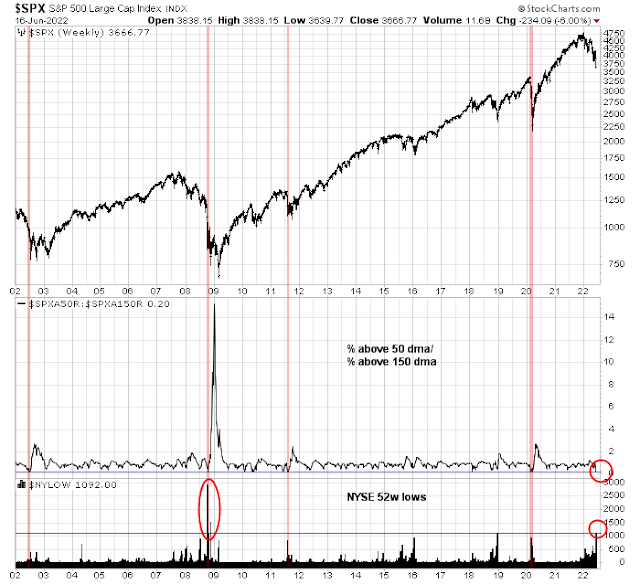 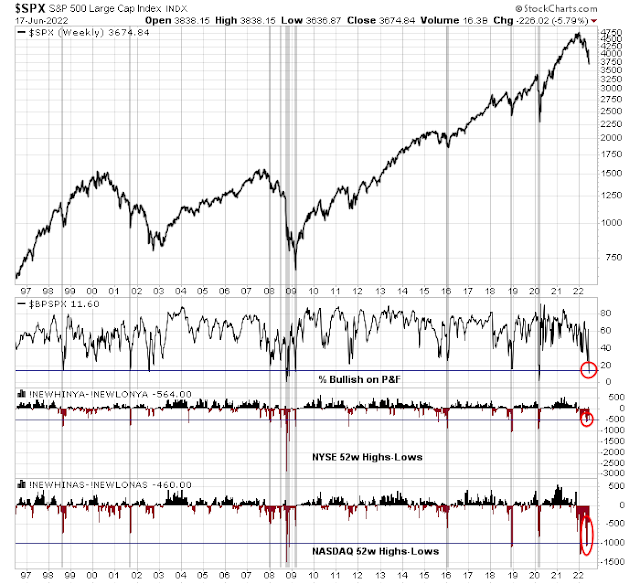 I previously highlighted the “good overbought” condition exhibited by the market based on the percentage of S&P 500 stocks above their 200 dma rising above 90% in mid-2020 after the COVID Crash (top panel, shaded areas). Such “good overbought” readings are indicators of strong price momentum that allow stock prices to advance steadily. Momentum faltered in mid-2021, which was an early sign of a market top. Past episodes have resolved in market bottoms when the percentage of S&P 500 above their 50 dma falls below 20% (bottom panel). This indicator reached 2% last week, which is an extreme level indicative of stock market panic. As well, the percentage of S&P 500 above their 200 dma fell to 12.8% last week, which is another extreme reading. 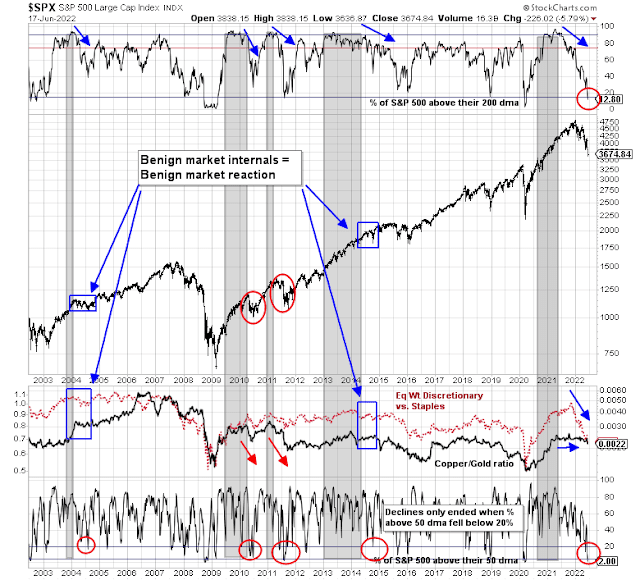 The BoA Global Fund Manager Survey showed that institutional managers have de-risked to levels comparable to the GFC. 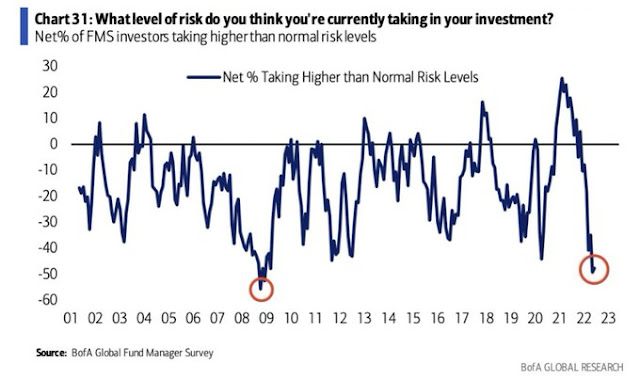 From a technical and sentiment perspective, these are all signs of the blinding fear and capitulation seen at major market bottoms. The only glaring exception was 2008, but 2008 saw a major financial crisis that shook the global banking system. This is not 2008. Today, we have coordinated global central bank tightening that raises recession risk, but no signs of a financial collapse. Arguably, the crypto craze served a useful purpose inasmuch it channeled many of the excesses into non-systematically important parts of the economy.

I recently wrote that the S&P 500 forward P/E is 15.2, which represents roughly fair value (see The Fed braces for a harder landing), but markets often overshoot fair value when it panics. However, other pockets of the stock market appear to offer compelling value.
The S&P 600 is trading at a forward P/E of 11, which is a level last seen during the GFC. The S&P 600 represents a better way of measuring valuation for small-cap stocks than the Russell 2000. The S&P 600 has far fewer unprofitable small caps than the Russell 2000 because of the stricter profitability inclusion criteria of S&P. Consistent with my observations about the number of NYSE 52-week lows, these readings exceed the market bottoms seen during the COVID Crash, the 2011 Greek Crisis, and the 2002 post-NASDAQ Bubble lows. 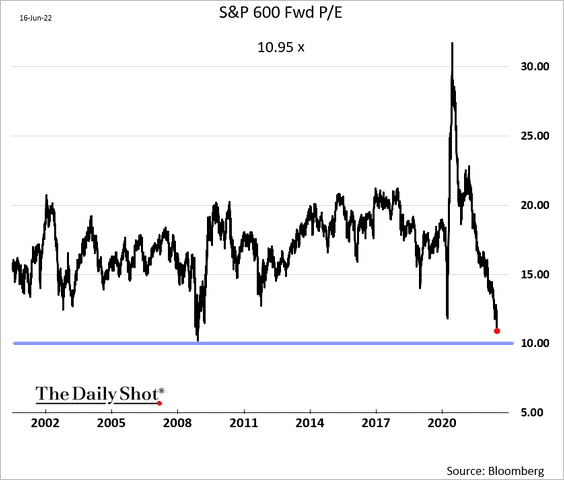 Tobias Carlisle of Acquirer Funds recently screened for companies trading below a trailing EV/EBIT ratio of 3 in the Russell 3000. He found 905, which is an all-time high.

Another indirect signal of value in the stock market is insider buying. Insiders tend not to be short-term traders in their own stocks. They prefer to focus on capitalizing on the lower long-term capital gain tax rate by holding their positions for a year or more. It is therefore constructive that this group of “smart investors” believe that the valuation of their companies relative to publicly available fundamentals are compelling enough that purchases outnumbered sales during the latest downdrafts. 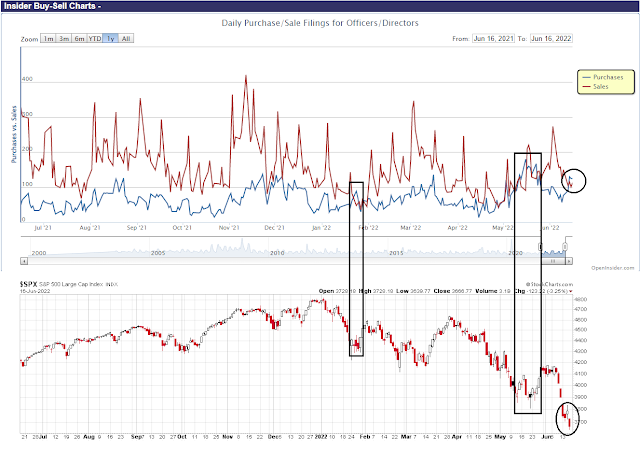 In short, both technical and valuation conditions indicate that the market gods are offering a gift to equity investors. But should investors look the gift horse in the mouth, just as the defenders of Troy should have?
The key risk to the market bottom narrative is a recession that sends earnings estimates skidding. FactSet reports that bottom-up forward 12-month EPS estimates are still rising in the face of an above average level of negative earnings guidance. 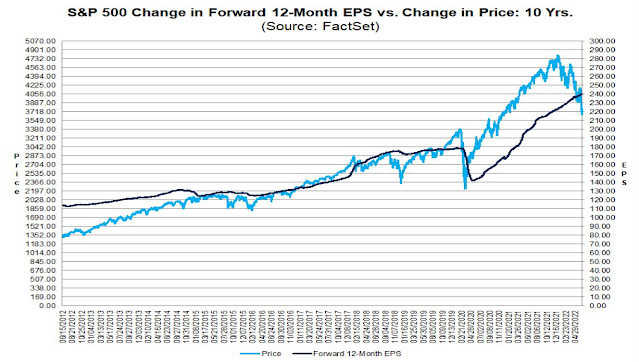 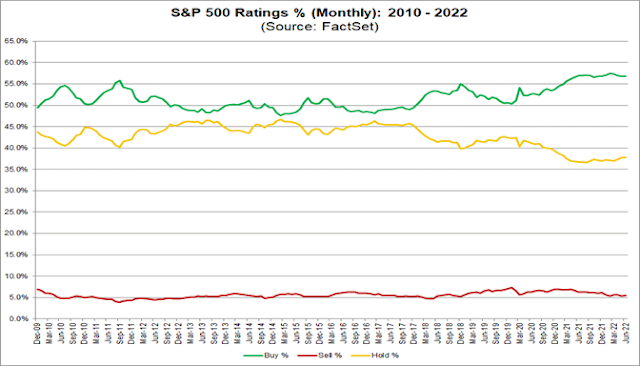 Recession risk is rising. New Deal democrat, who maintains a discipline by monitoring a series of coincident, short-leading, and long-leading indicators, has documented the deterioration of his long-leading indicators for several months. His latest update shows that the weakness is spreading to his short-leading indicators, which are designed to spot economic weakness six months ahead, indicating a possible downturn that begins in Q1.
The Wall Street Journal conducts a regular poll of economists to determine the probability of recession within 12 months. The latest reading is 44%, which is a level seen during or on the brink of actual recessions. 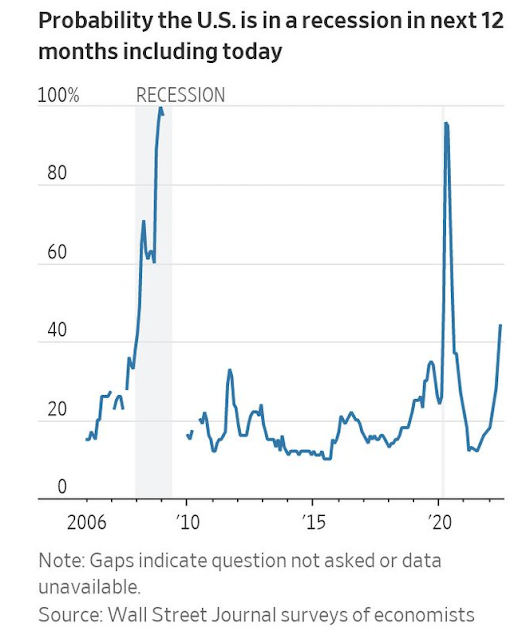 For the record, the National Bureau of Economic Research (NBER) is the official dater of recessions. It defines a recession as “a significant decline in economic activity that is spread across the economy and lasts more than a few months” and focuses on “three criteria—depth, diffusion, and duration”. This is a slightly more complicated metric that the simple two consecutive quarters of negative real GDP growth.

Wait for the retest

I resolve the bull and bear debate this way. The base case scenario is a double or triple bottom. Extreme oversold conditions were observed during past market panics in 2002, 2008, and 2011. The S&P 500 rallied and went on to retest the old lows several weeks or months later.
The lack of earnings downgrades is troubling in the face of growing recession risk. While the market recently went bonkers over the hot CPI print, a little-noticed effect of CPI is it tends to lag PCE, which is the Fed’s preferred inflation metric. That’s because the higher weight of shelter in CPI and rents and property prices, which affect rent, are lagging indicators. Historically, headline CPI-PCE (blue line) has risen strongly ahead of recessions. Both headline and core PCE appear to be topping out, which may foreshadow less aggressive Fed tightening.

Here is a closer look at core PCE, which peaked in February. The combination of strong CPI and tame PPI has led to a tamer May core PCE estimate.

How will the market react if earnings estimates decline while the Fed pivots to an easier monetary policy? There are too many moving parts to tell how this all plays out.
If there is a recession, it should be mild because of a lack of excessive leverage. In the mild recessions of 1990 and 2000-2002, forward EPS estimates fell by 10-15%. Keep in mind, however, that actual earnings didn’t fall in the 1970’s in nominal terms. It’s therefore possible during the current episode of elevated inflation that EPS estimates stay flat while interest rates decline.
One possible template for current market and economic conditions is the double-dip recession. GDP growth turns negative in Q2, which raises concerns that the economy has entered a recession, though it doesn’t get confirmed by NBER. Earnings estimates continue to rise, inflation begins to ease and so do Fed Funds expectations. The stock market rallies, only to meet the actual recession which begins in early 2023, which is the time frame forecast by many top-down models.
Double-dip recessions are rare. The last one occurred in 1980-81. The Dow first bottomed in April 1980 and rallied into early 1981 by breaking through the psychologically important 1,000 mark. It began a bear market that ended in August 1982 when the Fed eased in response to the Mexican Peso Crisis which threatened the US banking system. 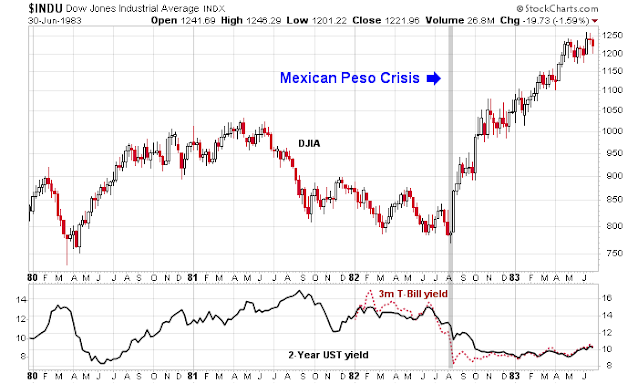 In conclusion, technical and valuation conditions are consistent with past major panic lows. The key risk is a lack of earnings downgrades in the face of growing recession risk.
Despite the strong technical evidence of a panic bottom, I am taking a more nuanced view. My base case scenario calls for a double or multiple bottoms in stock prices and a possible double-dip recession. History doesn’t repeat itself, but rhymes. Q2 earnings season will prove to be a key test for market expectations. Stay tuned.

20 thoughts on “Why last week may have been THE BOTTOM”