In search of the bullish catalyst – Humble Student of the Markets

I have pointed out before that the last time the 10-year Treasury yield was at these levels, the S&P 500 was trading at a forward P/E of 14-16. The current forward P/E is 16.8, which is slightly above that range. In order for stock prices to rise, at least one of two things has to happen. Either the discount rate has to fall, which expands P/E ratios, or earnings have to rise. 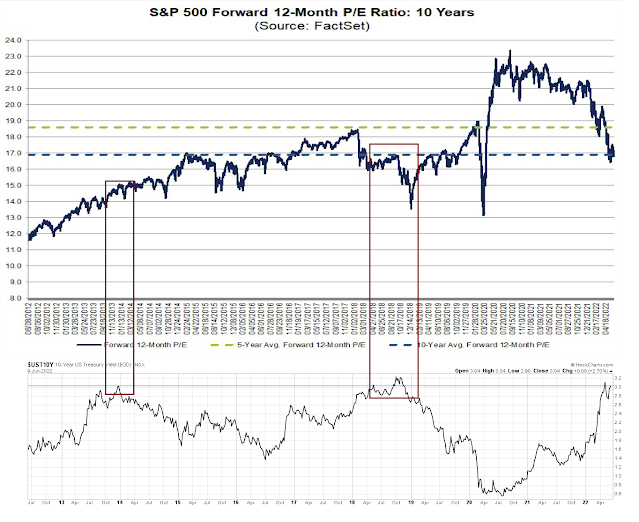 Since global central bankers are engaged in a tightening cycle, the prospect of falling rates is off the table. In that case, what’s the outlook for earnings?

The Daily Shot recently featured an analysis of S&P 500 consensus forward 12-month sales and EPS estimates. While both are rising, the rate of increase in forward EPS is steeper than sales, indicating margin expansion. While top-down strategists are starting to reduce their S&P 500 EPS estimates, bottom-up analysts are still raising. This analysis begs the question of whether Wall Street analysts are being excessively optimistic about the outlook for individual companies. 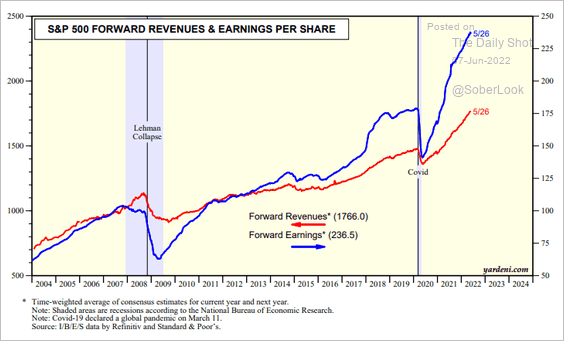 Ian Hartnett of Absolute Strategy Research pointed out that CEO confidence is plunging. Conditions are consistent with past earnings recessions. JPMorgan CEO Jamie Dimon recently warned about an impending hurricane:

I said there’s storm clouds, they’re big storm clouds, they’re — it’s a hurricane It’s, we — right now it’s kind of sunny, things are doing fine, everyone thinks the Fed can handle this. That hurricane is right out there down the road coming our way. We just don’t know if it’s a minor one or Superstorm Sandy or — yes, Sandy or Andrew, or something like that. 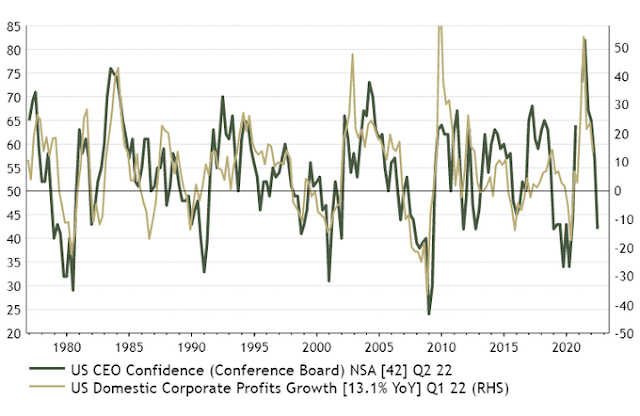 Staying with the storm analogy, there is a silver lining in the dark clouds. Despite the plunge in CEO confidence, insiders stepped up their buying when the S&P 500 tested its May lows. These is a constructive sign from a group of “smart investors” that the outlook isn’t necessarily disastrous.

The dour mood is becoming evident on Main Street. An Economist/YouGov poll found a majority of Republicans and a plurality of Democrats believe the economy is in an economic recession. 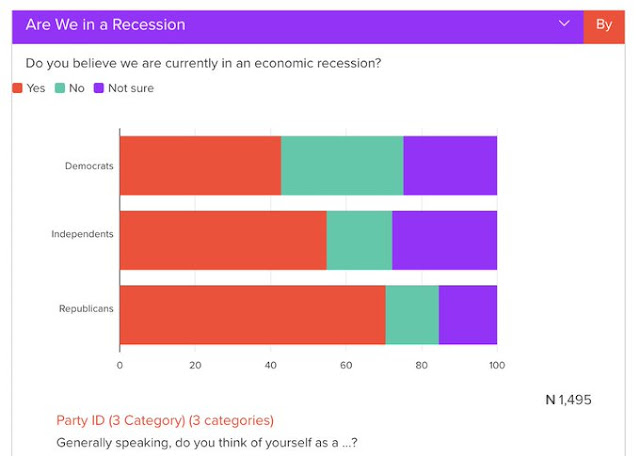 As a reminder, recessions are officially determined by NBER Business Cycle Dating Committee, based on a definition that “emphasizes that a recession involves a significant decline in economic activity that is spread across the economy and lasts more than a few months”. Even if you use the definition of two consecutive quarters of negative GDP growth, it’s difficult to square the recession view with the unemployment rate at 3.6%, though initial jobless claims have bottomed and begun to rise. 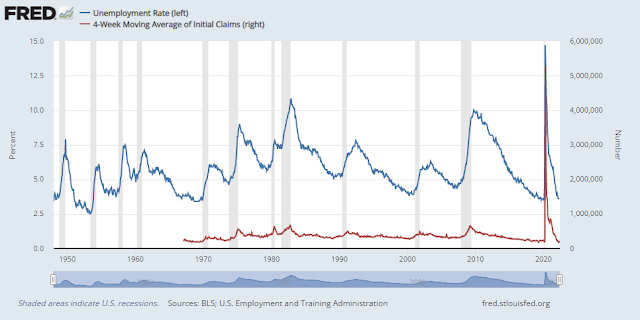 I interpret these conditions to mean that most people don’t know the specific definition of “recession”. They are probably using the term to describe their general feeling about the economy. In particular, inflation is biting into household budgets. The Economist/YouGov poll found that gasoline prices are becoming a problem for most people. 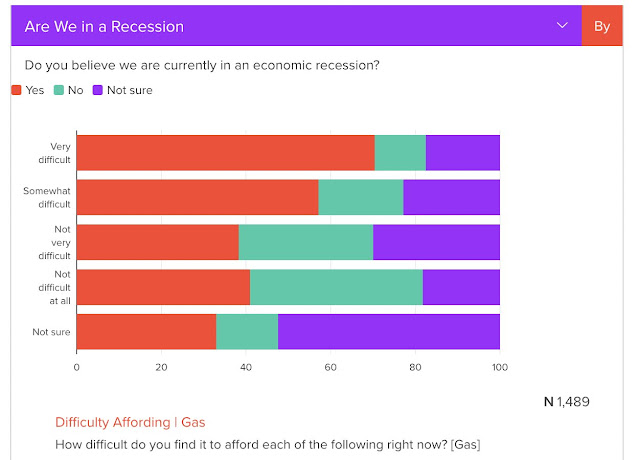 These conditions lend support to the Fed’s determination to maintain a tight monetary policy to fight inflation, especially in the wake of the hot May CPI report. These kinds of survey results can easily spark a wage-price spiral where the Fed loses control of inflationary expectations.

With the Fed intent on raising rates to fight inflation, what are the odds of a recession?
From a central banker’s perspective, real M2 money growth had been rising at a 3-4% rate until the COVID Crisis pushed liquidity well above trend. The Fed’s challenge is to return real M2 to trend growth, either hold real M2 growth flat until 2025 or sharply reducq liquidity over the next 12-18 months, which would be highly recessionary.

We have an objectively weak, and weakening, economy. At this point, I would suggest especially watching the consumer coincident indicators – restaurant reservations (one of the first, and easiest things for consumes to cut), and Redbook consumer spending. If these turn significantly negative, then trouble is very close. But I continue to think, based on the timing of the turn in the long leading indicators, that the danger of an outright downturn is next year rather than this.

The outlook for 2023 is extremely wobbly. As the Fed raises rates in order to destroy demand, it’s difficult to see how the economy can sidestep a recession in Q1 or Q2.
Here’s the good news. Investors are often afflicted with recency bias. When they think “recession”, they think either 2008, which was the Great Financial Crisis, or 2020, which was rescued by unprecedented levels of fiscal and monetary stimulus that are unlikely to be repeated.
This time is different. The US economy is faced with minimal financial crisis risk. Corporate balance sheets are strong. 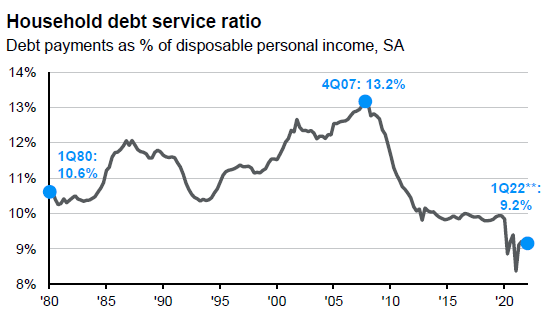 Instead, the economy is faced with a plain vanilla inventory recession. In the absence of excessive leverage, any slowdown will see greater resilience. A reasonable template would be the post-NASDAQ peak recession. While equity prices cratered because of excess valuation, the rise in the unemployment rate was relatively tame by historical standards.
That doesn’t mean, however, that a financial crisis is off the table. Notwithstanding the usual risk of a currency crisis from a strong USD that sparks either an EM crisis or excessive JPY weakness that sets off a round of competitive currency devaluation in Asia, the risk from the developed economies come from countries with property market bubbles, namely Sweden, Canada, Australia, Norway, and New Zealand (SCANNZ), where housing prices have surged far more than rents and incomes to create affordability problems. 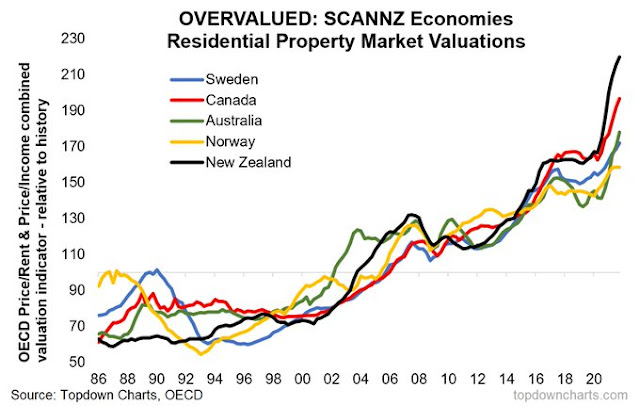 In conclusion, the equity market is currently suffering from a non-recessionary slump. Valuations are slightly above fair value and bottom-up EPS estimates are rising. In order for prices to advance, one of two things need to happen. Either earnings need to continue growing, or the cost of capital, otherwise known as interest rates, need to fall.
Earnings can only grow if the economy avoids a recession, which is a difficult task in light of the Fed’s tightening bias. If the 10-year Treasury yield were to decline, it would be the bond market’s signal of a weakening economy, which is negative for the earnings outlook.
I have made the point before that valuations don’t matter much in a bull market, but define downside risk in a bear market. This is a difficult economic environment for US equity investors. It’s time to consider non-US markets, whose forward P/E ratios are well below the S&P 500, as a way to mitigate downside risk and enhance upside potential when the turn actually arrives. 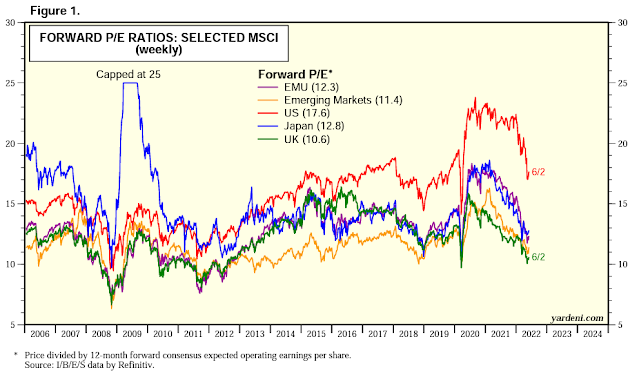 Just be aware of SCANNZ markets as a source of tail-risk.

16 thoughts on “In search of the bullish catalyst”