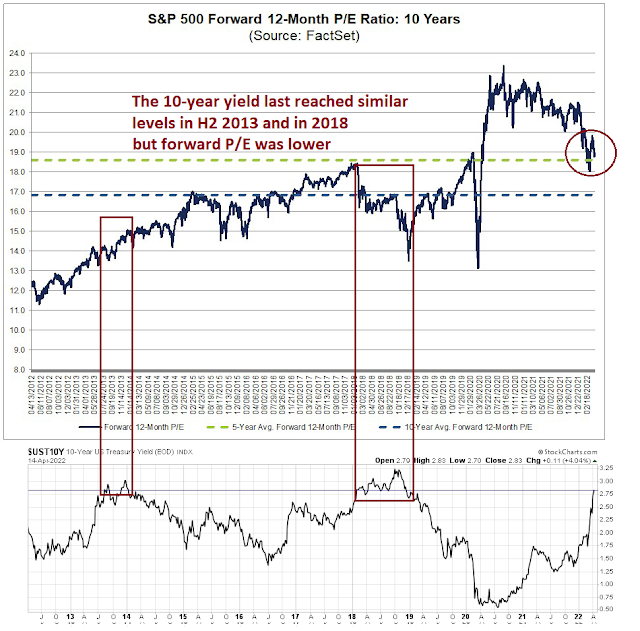 All else being equal, this implies downside risk of -15% to -30% for the S&P 500. That’s why US equity investors are playing with fire.

Inflation and inflationary expectations are why the Fed has turned so hawkish. The March core CPI report came in at 0.3%, which is well below Street expectations of 0.5%. The bad news is that services CPI has been accelerating for several months. As goods inflation ease from a combination of base effects and the easing of COVID-related supply chain shortages, consumers have shifted spending from goods to services. An acceleration in services CPI is an unwelcome development for Fed officials.
The Fed is well aware of these changes. New York Fed President John Williams stated in a Bloomberg interview: “We are seeing signs that consumers are shifting their pattern from goods to services … It is a pattern I expect to continue, and it is an important part of the story as we watch consumers move back to more normal patterns of spending.”

While core CPI was weaker than expected, PPI came in hot and well ahead of expectations at an astonishing 11.2%. The key question is how well companies will be able pass on these rising input costs to their customers, the effects of the pass-through on corporate margins, and the leakage effects of higher commodity prices on CPI.

While inflation will eventually come under control, the risk for the Powell Fed is that inflationary expectations become unanchored. Already, they have reached a new high for the current expansion, though levels are consistent with readings seen in past cycles.

As a consequence, the market is now discounting consecutive half-point rate at the next three FOMC meetings, followed by a staccato series of quarter-point every meeting until February 2023. Fed Funds are expected to reach the Fed’s long run neutral rate of 2.4% by the November meeting and well exceed the Fed’s projected peak rate of 2.8%, according to the Summary of Economic Projections. 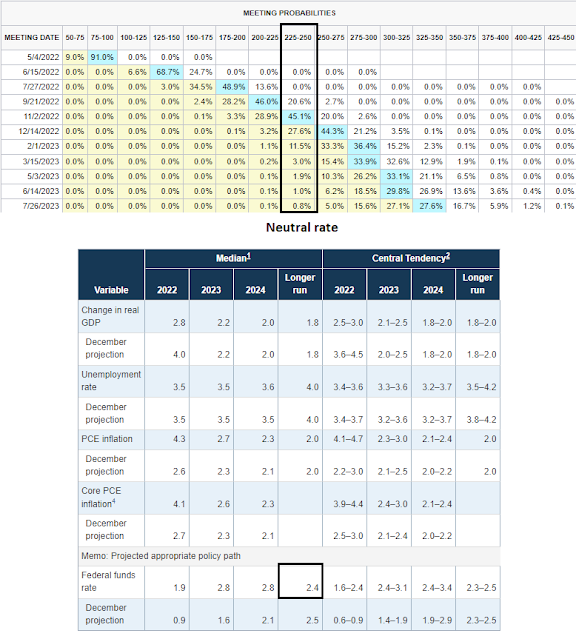 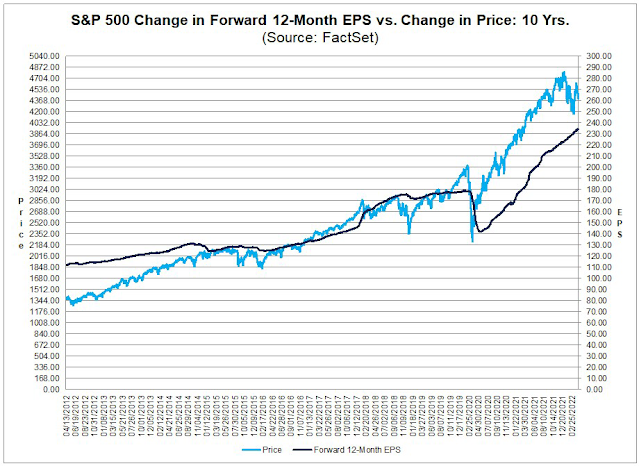 However, there is more to earnings growth than meets the eye. Jurrien Timmer at Fidelity pointed out that S&P 500 Q1 EPS growth is reported to be 5.1% but all of the gains are attributable to higher oil and gas prices. Q1 EPS growth falls to -0.1% if the energy sector (3.9% of S&P 500 weight) is excluded.

Q1 earnings season could be a problem. Corporate guidance has turned negative. While EPS beat rates could still be positive as management plays the beat the Street expectations game, the challenge is to maintain a positive tone when discussing the outlook for the remainder of 2022. 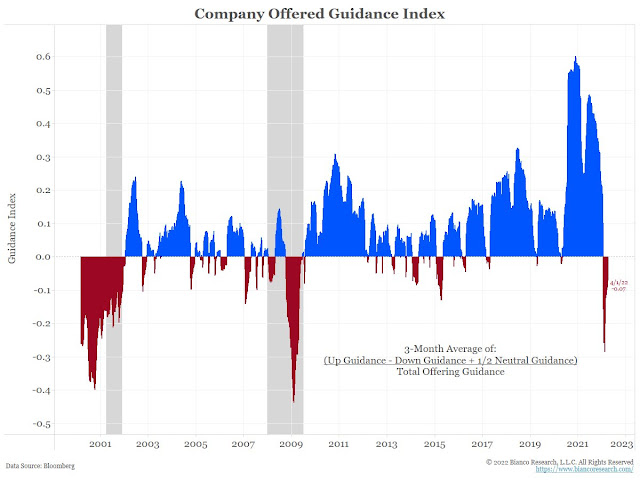 As well, top-down indicators point to a slowing economy, which may also create headwinds for earnings expectations for the remainder of 2022. The Citigroup Economic Surprise Index, which measures whether high-frequency economic releases are beating or missing expectations, could be starting to stall. 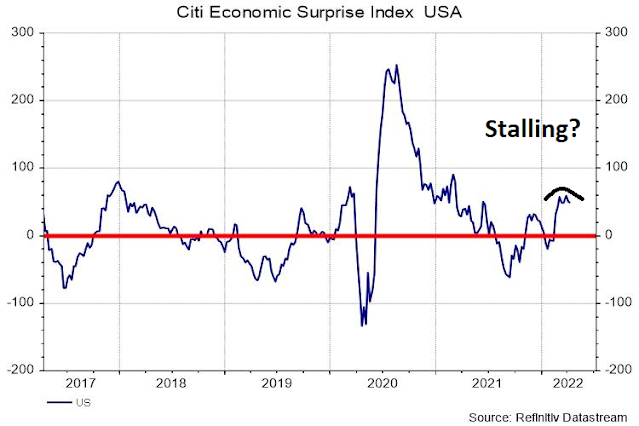 Job postings on Indeed have plateaued and begun to roll over. When will the deceleration in job gains begin to show up in the Non-Farm Payroll reports? 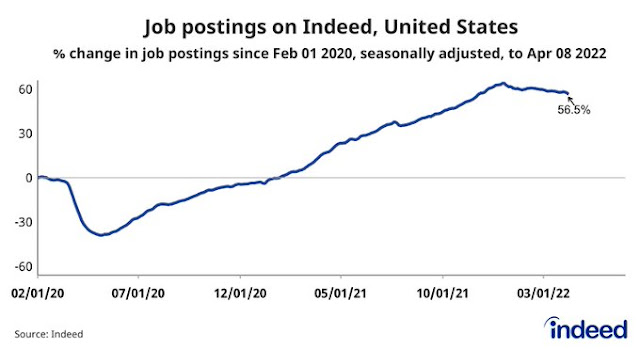 As well, the slight miss in the March retail sales report shouldn’t have been a surprise. Weakness had been foreshadowed by the Chicago Fed Advance Retail Trade Summary (CARTS).

From a global perspective, China’s zero-COVID induced lockdowns are concerns for global growth. Gavekal reported that in its survey of the top 100 Chinese cities, all but 13 have imposed some form of quarantine restriction, from no restrictions (level 0) to full lockdown (level 4). More importantly, lockdown intensity is increasing. 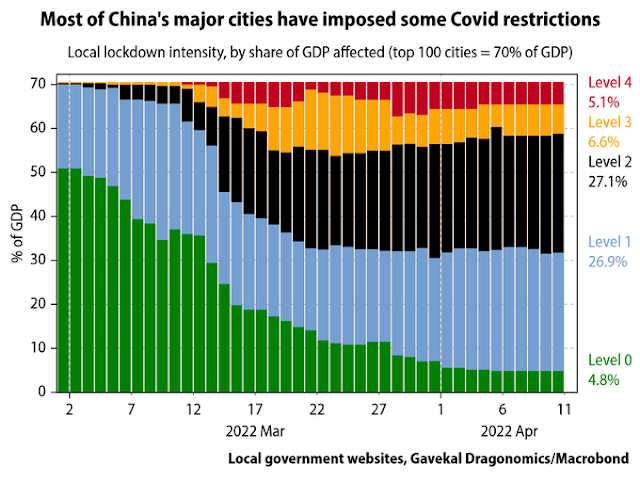 High frequency data shows a slowdown in the Chinese economy and the world faces two China shocks. The first is from falling demand from its zero COVID policy, and the second is from a supply shock owing to a slowdown in Chinese production. Neither are growth-friendly and neither will be positive for the corporate earnings. 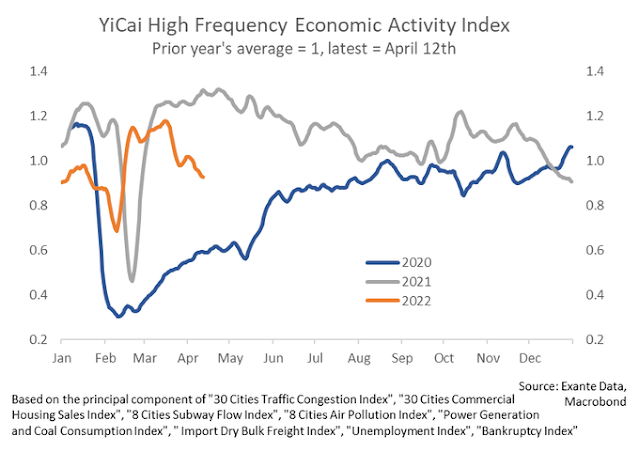 How long can US equity prices defy valuation risk? One hint can be found in the latest BoA Global Fund Manager Survey, which found that global institutions regard the US as a safe haven. In the short run, positive fund flows can partially support the S&P 500.

Before the bulls get too excited, the same survey found that managers believe S&P 500 downside risk is greater than upside potential. As a frame of reference, the survey was conducted April 1 to 7, when the S&P 500 traded in a range of 4500-4540. 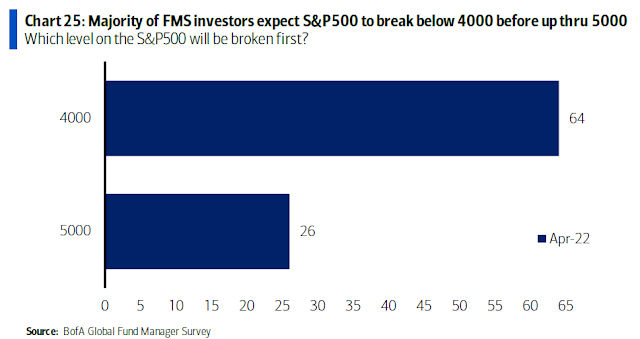 In conclusion, the S&P 500 is facing the twin macro risks of a hawkish Fed and deteriorating fundamentals. Based on the current 10-year yield of 2.8% and the current earnings outlook, the historical downside risk is between -10% and -30%. Arguably, the 10-year yield should be much higher in light of recent core CPI readings, which would have even greater dire consequences for equity valuation.

16 thoughts on “US equity investors are playing with fire”