An energy and geopolitical recession? – Humble Student of the Markets

Much has happened in the space of a week. In the wake of Russia’s Ukrainian invasion, the West has responded with a series of tough sanctions designed to tank the Russian economy. Energy and other commodity prices have soared and this is shaping up to be another energy and geopolitical crisis. The last three episodes resolved in recessions, which are equity bull market killers. Fourth time lucky?

The backdrop sounds dire. Nouriel Roubini recently warned of stagflation in a Project Syndicate essay. An analysis from Oxford Economics shows that the shocks will hit the Russian economy, but Europe will not be spared. The US is expected to see the least negative impact from the Russia-Ukraine energy shock. 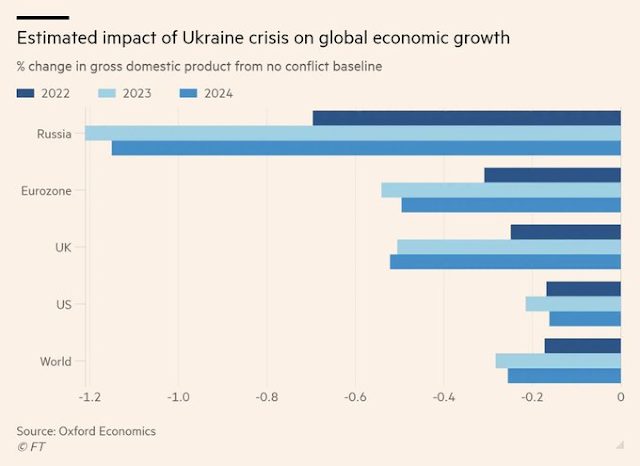 As the Fed embarks on its tightening cycle, it faces a nightmare stagflation scenario of higher energy and commodity prices pressuring inflation and falling economic growth.

In response to the Russian invasion, the West collectively agreed to exclude major Russian banks from SWIFT. More importantly, the Russian central bank, Bank of Russia (BoR), will be blocked from its assets held in the West.
Zoltan Pozsar, a money market analyst at Credit Suisse, warned that “supply chains are payment chains in reverse” and explained these sanctions matter to the global financial system in a recent research note.

In the double-entry accounting world, someone’s asset is someone else’s liability. Freezing or blocking access to Russian assets can create a problem on the other ledger on the balance sheet. Let’s unpack the effects.
The BoR reported that it has $630 billion in FX reserves as of February 18, 2022. The report is no longer available on the BoR website but a screenshot was saved by Matthew Klein at Barron’s. 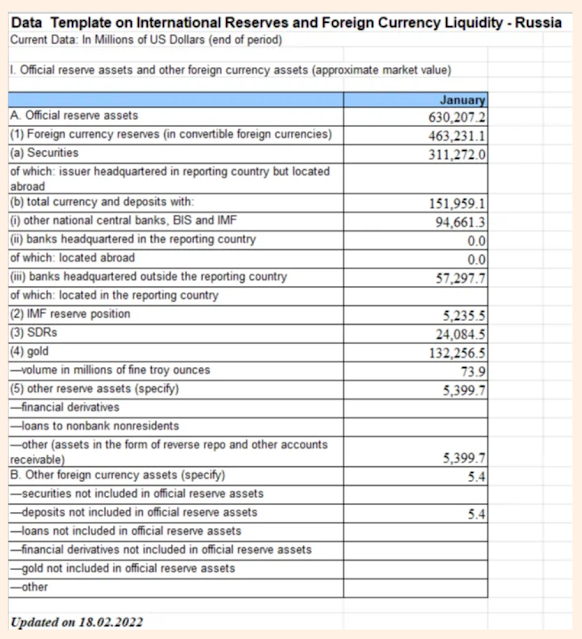 The asset mix breakdowns show 23.3% in gold and 12.8% in RMB, which totals 36.1% that’s out of the reach of sanctions. In practice, Treasury Secretary Janet Yellen recently announced that roughly half of BoR assets were immobilized. Regardless of implementation details, Western sanctions have turned Russia’s vaunted FX reserves into a financial Maginot Line. 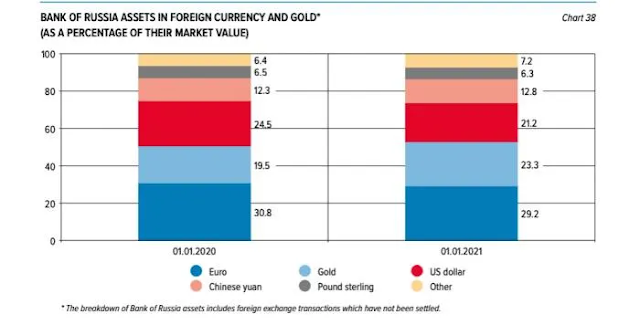 How sanctions hurt the West

While blocking BoR assets and cutting Russian bank access to SWIFT may sound good in theory for policy makers to tanks the Ruble and sparks hyperinflation in Russia, the West will nevertheless have to deal with a number of unintended consequences.
The most important consideration is the possible loan losses and losses from the possible Russian nationalization of banking subsidiaries. According to the latest BIS figures dated September 2021, the four largest countries most exposed to Russia are France ($23.6 billion), Italy ($23.2 billion), Austria ($17.1 billion), and the US ($14.5 billion). Austria’s exposure is mostly accounted for by Sberbank Europe, which leaves the French and Italian banks with high exposures to Russian assets. CNBC reported that Citi flagged $5.4 billion of exposure to Russia, which represents 0.3% of its assets, though it’s unclear how much of that was in its subsidiary Citibank Russia. Is it any wonder why financial stocks are skidding? 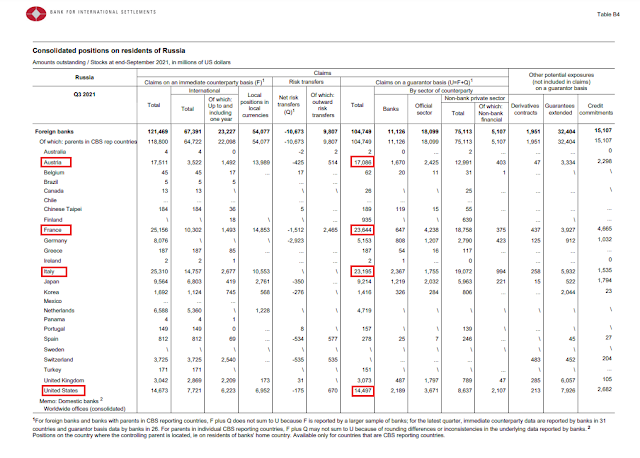 As for Russian energy exports, the US Treasury has issued guidance to exempt this category from sanctions. That said, sanctions on the export of oil field service equipment to Russia will hobble production capacity in the long run.

Treasury remains committed to permitting energy-related payments — ranging from production to consumption for a wide array of energy sources — involving specified sanctioned Russian banks. To help protect Americans, partners, and allies from higher energy prices that would drive more resources to Russia, Treasury swiftly issued and updated Russia-related guidance to allow U.S. financial institutions to continue processing these transactions and underscore that such activity is not prohibited by sanctions.

For investors, the Fed cycle is still the center of all attention. In the face of the conflict, the Fed faces a dilemma. Fed Chair Jerome Powell made the following points in his Congressional testimony last week:
Here is the Fed’s dilemma. Economic growth is skidding. The Atlanta Fed’s GDPNow nowcast of Q1 growth is 0.0%. 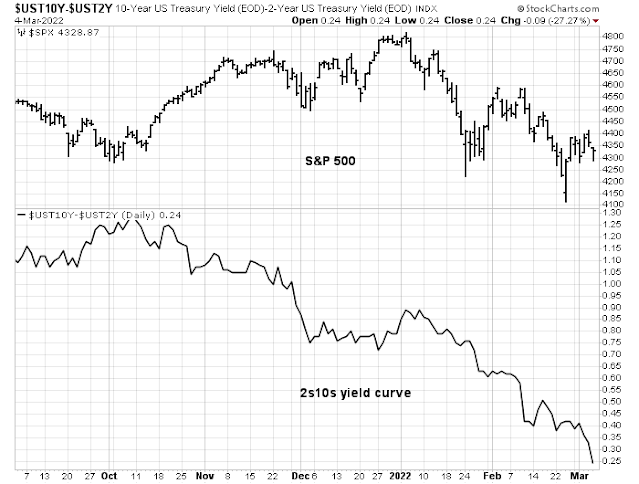 On the other hand, commodity prices are surging, which puts upward pressure on inflation. Fitch warned that higher prices can have a self-reinforcing effect on inflation. While the Fed expects inflation pressures to fall as supply chain bottlenecks ease this year, higher commodity prices will make the projection of a core PCE rate of 2.6% by year-end difficult to achieve.

Inflation is a dynamic process and can be self-reinforcing. Energy price shocks related to geopolitical events exacerbate risks. Various scenarios could see inflation stay high through 2022. If core inflation were to remain high or increase further and inflation expectations started to become de-anchored from targets, this could prompt swift moves from central banks.

These conditions are laying the foundation for a stagflationary environment. Growth is slowing, but inflation pressures are still strong. Conventional thinking dictates that the Fed continues to tighten and drive the economy into recession in order to meet its price stability mandate.

That seems to be the path the Fed is on. In his Congressional testimony, Powell set a course for raising rates. While the Fed projects inflation to cool off this year, persistent higher commodity prices poses a problem for monetary policy. Powell concluded, “We will use our policy tools as appropriate to prevent higher inflation from becoming entrenched while promoting a sustainable expansion and a strong labor market.”
Powell also voiced concerns about how commodity price increases would feed an inflation spiral during his Senate testimony: “Commodity prices have moved up, energy prices in particular. That’s going to work its way through the U.S. economy. We’re going to see upward pressure on inflation, at least for awhile. We don’t know how long that will be sustained for.”
To reinforce his inflation concerns, Powell underlined the point that he is willing to drive the economy into recession to control inflation (see link to video).

The financial markets are already beginning to discount stagflation risk. When the stock market weakened in late January, insider buying briefly ticked up, which was a constructive sign for equities. But when the market weakened again to test the January lows as geopolitical risk rose, insiders did not step up to buy. In effect, insiders are discounting a significant growth slowdown. 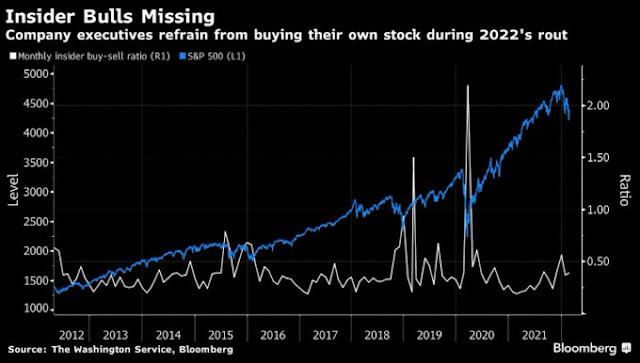 Bloomberg Economics sketched out three scenarios of how this crisis could resolve itself. Much depends on how energy and commodity supply disruptions play out. In all cases, the impact of the sanctions is the worst in Russia, moderate in Europe, and the least for the US. The best-case scenario, in which oil and gas keep flowing and markets calm down, sees a tanking Russian economy, a European slowdown, and a steady Fed tightening cycle. The worst-case resolves in 1970’s style stagflation and a synchronized global recession. There are no bullish outcomes. 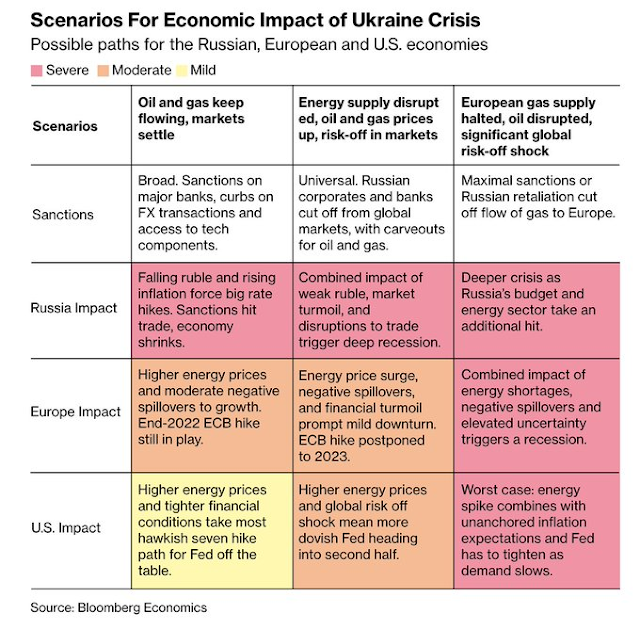 Although the outlook appears dire, keep in mind that not all oil price spikes have led to recessions. The accompanying chart shows the two-year rate of change in oil prices (bottom panel), which was chosen to smooth out pandemic related disruptions. Since 1983, there were six price spikes when the rate of change rose above 100% and only three of them resolved with recessions. 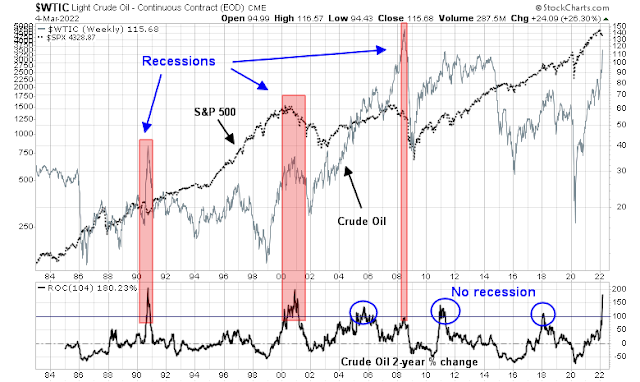 Ed Clissold at Ned Davis Research pointed out that past geopolitical-related oil spikes have tended to be transitory in nature. If history is any guide, commodity price inflation anxiety will peak and begin to fade in about two months. 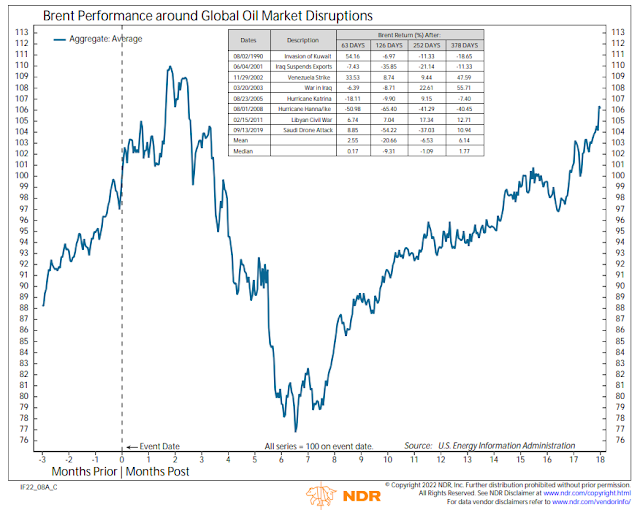 In conclusion, the Russia-Ukraine war is unsettling for the risk appetite and asset price outlook. It only accelerates the scenario I outlined several weeks ago (see A 2022 inflation tantrum investing roadmap). The market phases are defined as:
The market is somewhere in a transition period from phase 1 to 2. Tactically, the market is oversold and it could rally at any time. All it takes is the whisper of a negotiation breakthrough. Investors need to keep in mind that the Fed cycle remains the dominant driving force in stock prices. In the current environment, use rallies to reduce equity weights and overweight defensive sectors in their equity portfolios and slowly increase their weights in high-quality large-cap growth as duration plays in anticipation of falling bond yields and a flattening yield curve.

As an indication of the quality growth characteristic of large-cap growth stocks, forward estimates of the technology sector’s are still rising. This makes them a refuge for investors as economic growth slows. 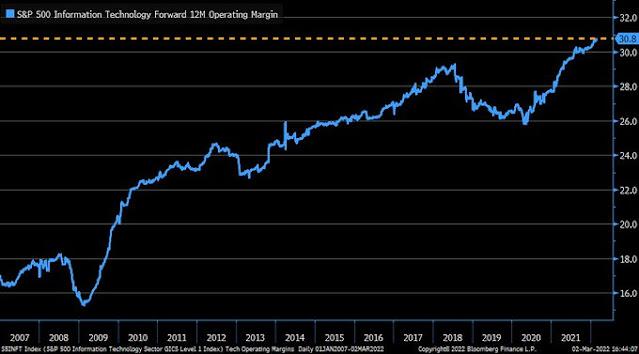 25 thoughts on “An energy and geopolitical recession?”