Fade the value rebound – Humble Student of the Markets

In the past week, several readers have asked whether it’s too late to be buying financials, value, and other cyclical stocks. In reply, I highlighted the recent Mark Hulbert column, “Value stocks now are beating growth by 10 points, but the easy money might be behind us”, namely that the value/growth reversal may not necessarily have legs.

I analyzed value’s relative strength back to 1926, courtesy of data from Dartmouth College professor Ken French. On average, a given month’s relative strength persisted for just one month. With holding periods lasting two or more months, value’s performance against growth was only randomly related to what came before…
So if you’re keeping score for these three instances in which value beat growth by as much as it has recently, there’s one case in which value relative strength continued, one in which it reversed itself, and one in which there was no trend one way or the other. Good luck extrapolating that into the future. 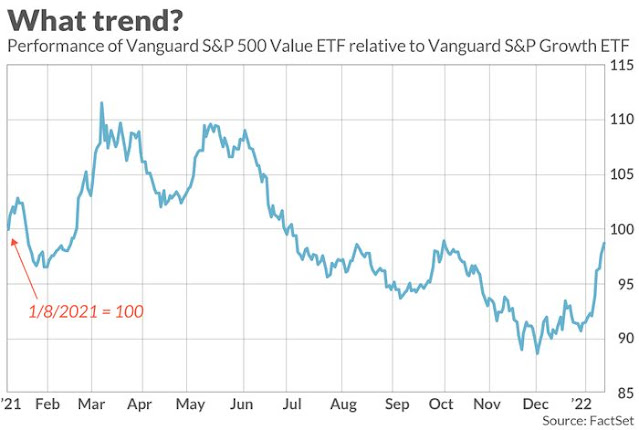 Here are some other reasons to fade the value rebound.

First, it’s important to understand how the beta of value stocks to interest rates. The returns of the Rising Rates ETF (EQRR) is highly correlated to the 10-year Treasury yield, both on an absolute basis and relative to the S&P 500. The sector weights of EQRR are also coincidentally concentrated in sectors considered to be cyclically sensitive and value-oriented. 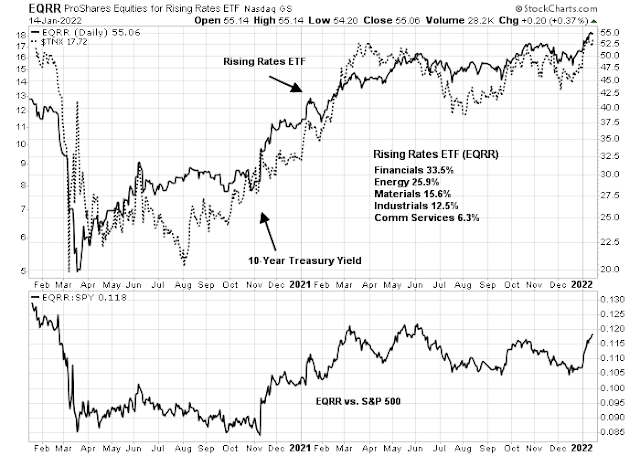 As well, consider how value stocks are positioned within the S&P 500. Growth sectors, which consist of technology, communication services, and Amazon and Tesla, which are two large-cap stocks within the consumer discretionary sector, make up 44.9% of the S&P 500 index weight. By contrast, value sectors, which are financials, industrials, consumer discretionary ex-AMZN and TSLA, energy, and materials, are only 30.8% of index weight. While value stocks are generally cheaper than growth stocks on a variety of valuation metrics, value stocks are also highly concentrated in cyclical sectors and industries. 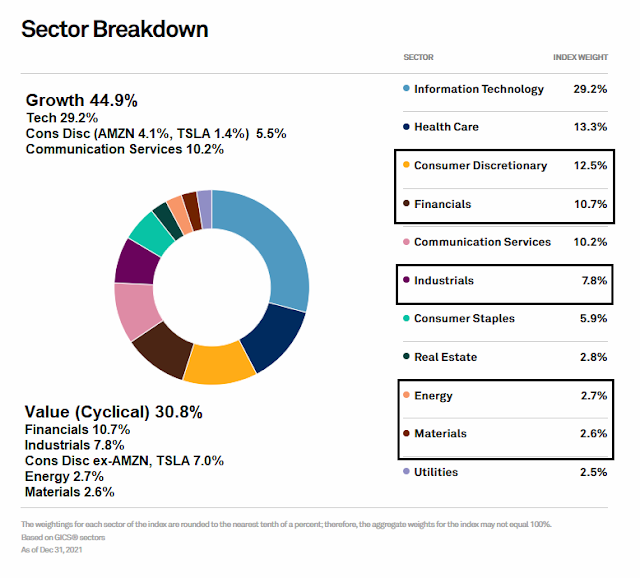 With the index weight analysis in mind, the relative weight difference between growth and value also means that any sudden or large scale rotation from growth to value will produce a sudden spike in relative performance, which is what happened recently.

Longer-term, however, there are two key drivers of value and growth stock relative performance, bond yields and the yield curve, and the cyclical outlook for the economy.

Let’s begin with the interest rate outlook. The Federal Reserve has been active in its communication strategy in telegraphing its next move. Monetary policy has pivoted from an accommodative to a tightening stance. Fed Funds futures are now discounting four quarter-point rate hikes in 2022, which is a distinct change from six months ago when expectations called for a possible rate hike at the end of 2022. 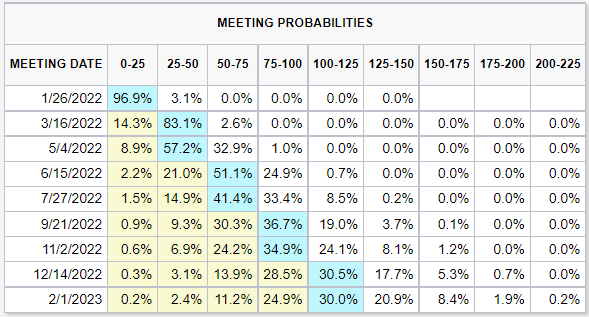 In addition to its restrictive views on interest rate policy, the Fed is also turning hawkish on the withdrawal of balance sheet stimulus. Fed Chair Jerome Powell stated during his Senate re-confirmation hearings last week that while no firm decision has been made on the Fed`s balance sheet, otherwise known as quantitative tightening (QT), “At some point, perhaps later this year, we will start to allow the balance sheet to run off.”
Passive QT may sound benign, but it really isn’t. Passive QT calls for allowing securities to mature without reinvesting the proceeds while refraining from active selling the Fed’s holdings. However, its effects of are different from the last passive QT round after the GFC. Alfonso Peccatiello pointed out that the structure of the Fed’s balance sheet is highly concentrated in shorter maturities. A strategy of pure passive QT would see over $1 trillion roll off the Fed’s balance sheet in 2022 and a total of $2 trillion in the 2022 and 2023. That’s a lot of tightening. 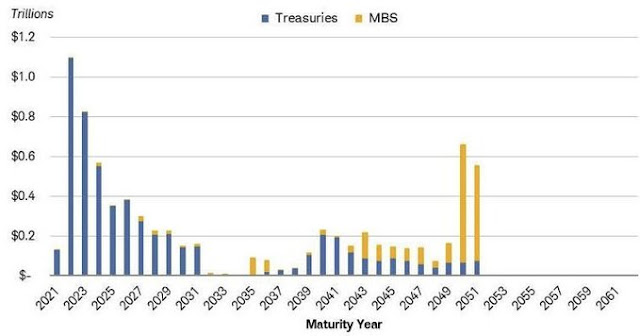 The bond market has reacted to the Fed’s increasingly restrictive bias. Bond yields pulled back after the initial spike. More importantly, the 2s10s yield curve flattened after an initial steepening reaction and the 5s30s have been flattening for about a month. The flattening yield curve is an expectation of slower economic growth. 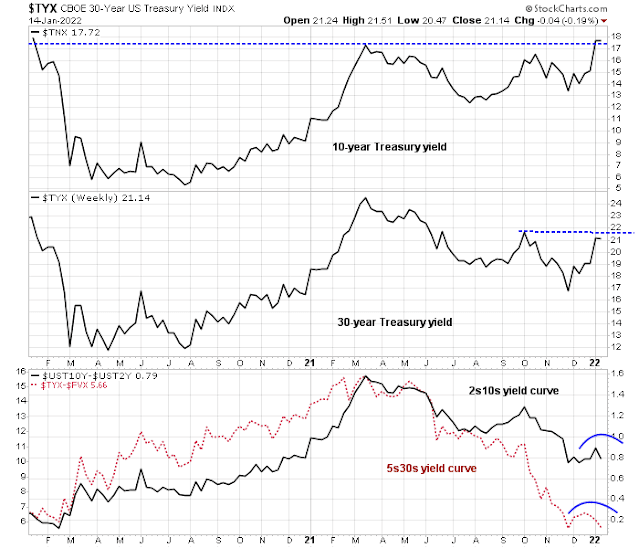 Nevertheless, the Fed is facing growing pressures to be more hawkish in the face of rising inflation. A chorus of former Fed officials called for a stronger tightening response. The WSJ reported that former Fed governor Laurence Meyers believes the Fed is at risk of being behind the inflation-fighting curve.

It isn’t so much inflation today that’s the problem. What they want to make sure is that they haven’t let the situation get out of hand, where once the supply-based inflation has come down, demand-based inflation tells them they should have gone sooner or faster.

Former New York Fed President Bill Dudley wrote in a Bloomberg Op-Ed that the Fed’s latest economic projections amount to a dovish “fantasy” that inflation can return to 2% with rates gently rising up to 2% over the same three-year timeframe. The Fed may need to raise rates four times this year.
Former Fed governor Frederic Mishkin expressed his opinion in the Financial Times that the Fed misjudged demand last year and poorly executed its new flexible average inflation targeting framework.
There are no doves left on the FOMC. Even über-dove San Francisco Fed President Mary Daly expressed support last week for a March rate hike. Charles (“don’t hike until you see the whites of inflation’s eyes”) Evans of the Chicago Fed raised concerns about price stability and stated, “Because inflation has stayed higher and longer we have to take action quicker than I thought.”
Here is why this matters to value stocks. The relative performance of financial stocks is especially sensitive to the shape of the yield curve. A steepening curve, which is the bond markets signal of a strong economy, is positive for the sector because banks borrow short and lend long. A steepening yield curve is positive for lending margins. Conversely, a flattening yield curve is negative for financial stocks. The Fed’s hawkish pivot on both rate hikes and its balance sheet indicates it has entered a tightening cycle, which is negative for the growth outlook. A tightening cycle is designed to cool off economic growth, which should result in a flattening yield curve, not a steepening one. 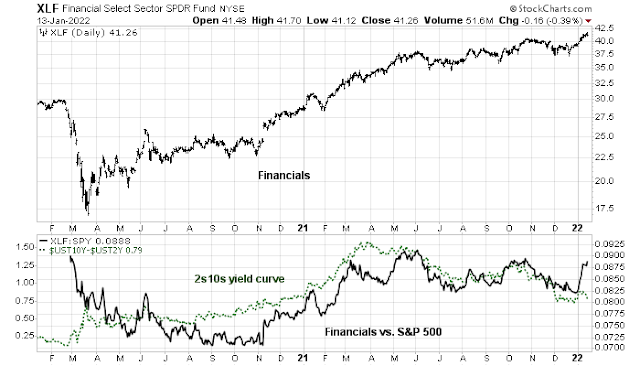 Notwithstanding the effects of a tightening cycle, what about the organic cyclical outlook, which is also important to value stocks?
The Citigroup US Economic Surprise Index, which measures whether economic data is beating or missing expectations, has rolled over after recovering from a negative reading in Q4. 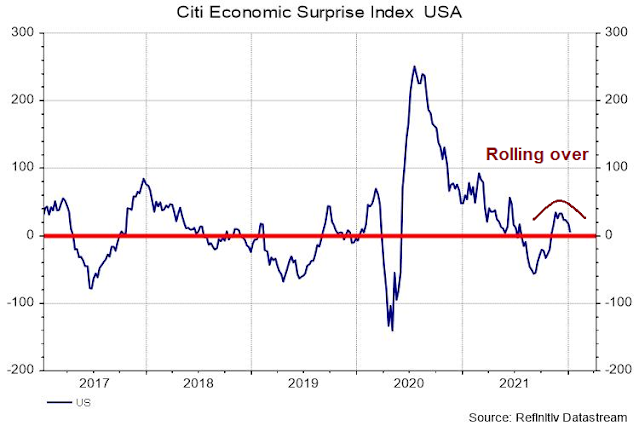 Cyclically sensitive industries are not showing any signs of relative strength except for energy stocks. Most cyclical industries are trading sideways relative to the S&P 500. Is this what market leadership looks like? 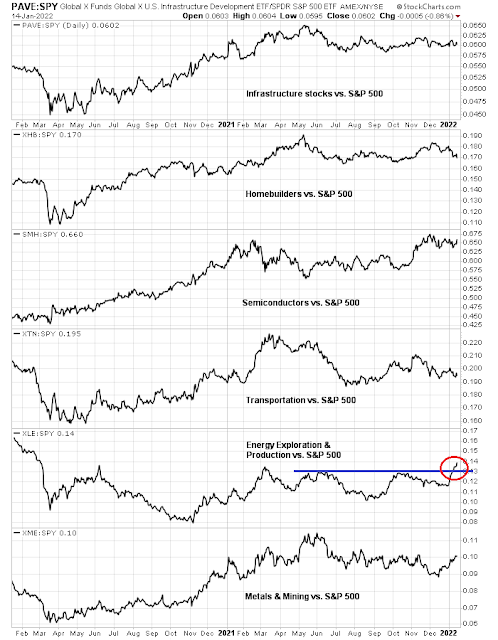 Looking globally, the relative performance of the stock markets of the major energy- producing countries has been correlated to oil prices, but they are also trading sideways to down relative to the MSCI All-Country World Index. Moreover, the cyclically sensitive copper/gold ratio has been trading sideways, which is another signal of lackluster economic growth.

The final nail in the coffin of the cyclical trade comes from Barron’s in the form of the contrarian magazine cover indicator. Barron’s turned bullish on commodities. 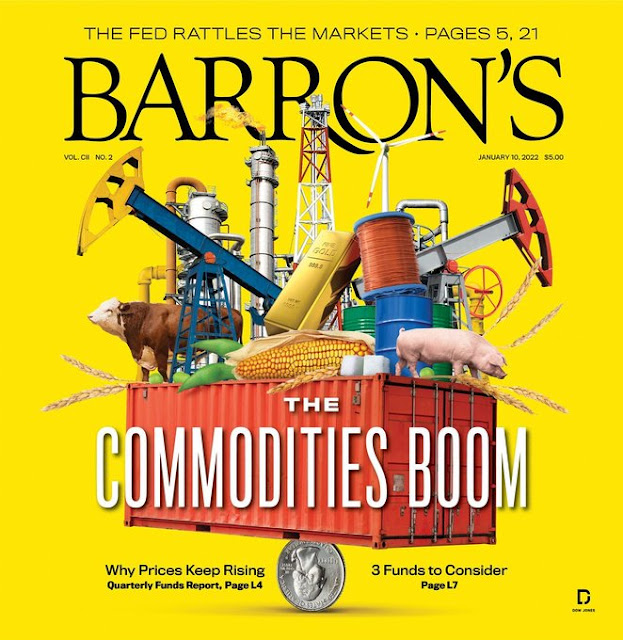 If equity investors were to fade the value rebound, how should they be positioned?
In addition to an underweight position in value and cyclical sectors, investors should focus on the quality in their equity portfolios. There are many ways to define quality, one simple way is profitability. Standard & Poors has a stricter index profitability inclusion criteria for stocks than Russell. Comparing S&P and Russell indices, the large-cap quality factor began to outperform in late 2021 and a similar measure rose coincidentally for small-cap stocks. 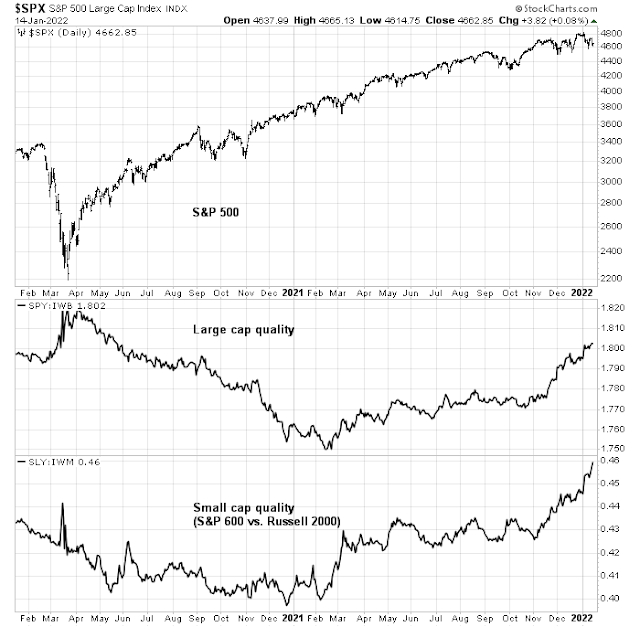 Even within the growth and value universes, quality matters. The S&P growth and value indices started to beat their Russell counterparts in November (bottom two panels). In addition, there was a minor divergence between the Russell 1000 Value to Growth ratio and the S&P 500 Value to Growth ratios, indicating that high-quality growth stocks performed better during the value rebound (top panel). 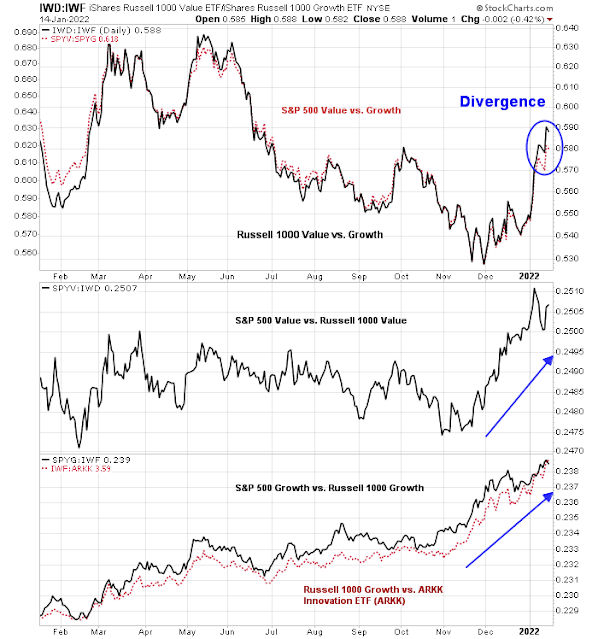 In summary, the economy is transitioning to a mid-cycle phase of its expansion. Economic and earnings growth momentum are fading after the initial V-shaped recovery in stock prices. Short rate pressures are rising, but cyclical relative strength, as measured by the commodity/stock (CRB/S&P 500) ratio, is flat. Similar episodes in 1994, 2004, and 2010 resolved themselves with sideways and choppy stock markets. Investors should not expect superior performance from value and cyclical sectors. Instead, focus on stocks with quality growth characteristics and defensive names. 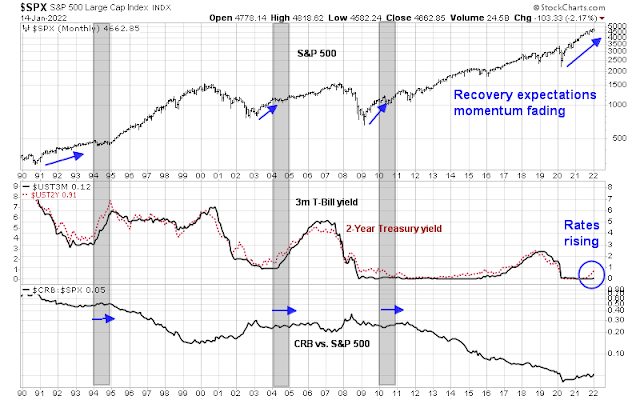 6 thoughts on “Fade the value rebound”