The anatomy of a Santa rally – Humble Student of the Markets 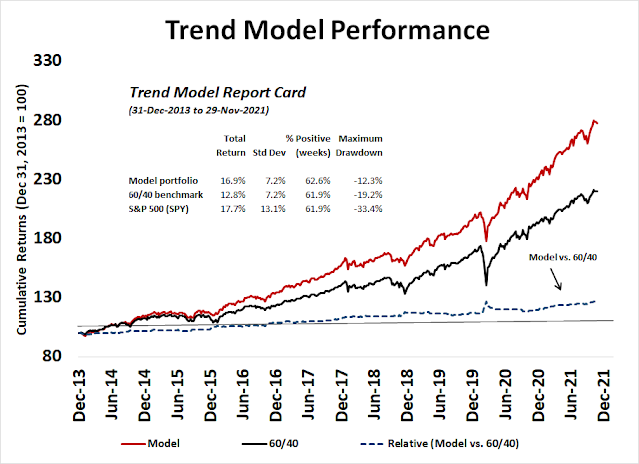 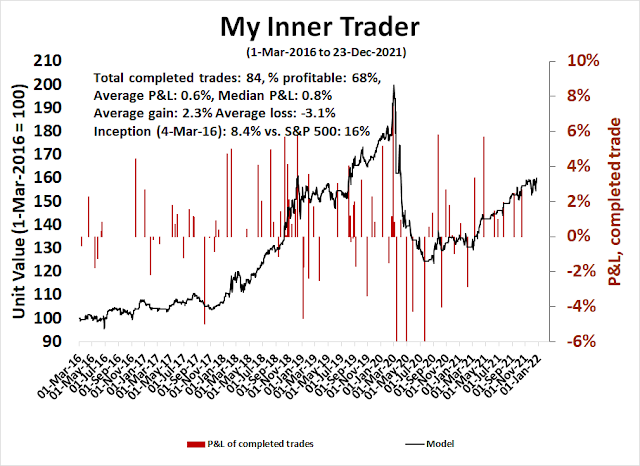 Has Santa come to town?

Will the real Santa Claus rally, which begins on Monday and lasts until the second trading day of January, now begin in earnest?
I pointed out last week (see A breakout to S&P 4920?) that the S&P 500 was potentially forming an inverse head and shoulders pattern, but head and shoulders patterns are incomplete until the neckline breaks. The market staged a marginal upside breakout through resistance on Thursday. The measured objective of the inverse H&S breakout is about 4920, but that level may be overly ambitious. If the Santa rally has truly begun, one of the tactical indicators that he has returned to the North Pole is whether the VIX Index falls below its lower Bollinger Band, which is an overbought signal to take trading profits. 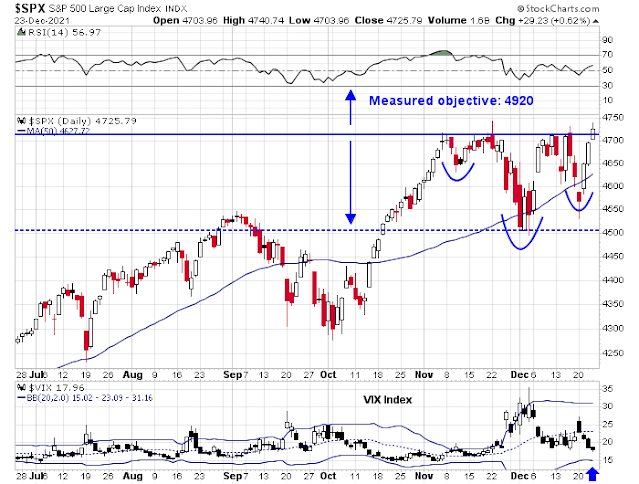 Here is what else I am watching.

In my last post (see Was the Grinch in the house?), I outlined some possible characteristics of a year-end market advance. One is the snapback of beaten-up stocks as tax-loss selling season ends. One possible group for a relief rally is speculative growth stocks, which have begun to bottom out relative to both the S&P 500 and NASDAQ 100 in December but tailed off in the last week. Will they pop in the coming week and early January? 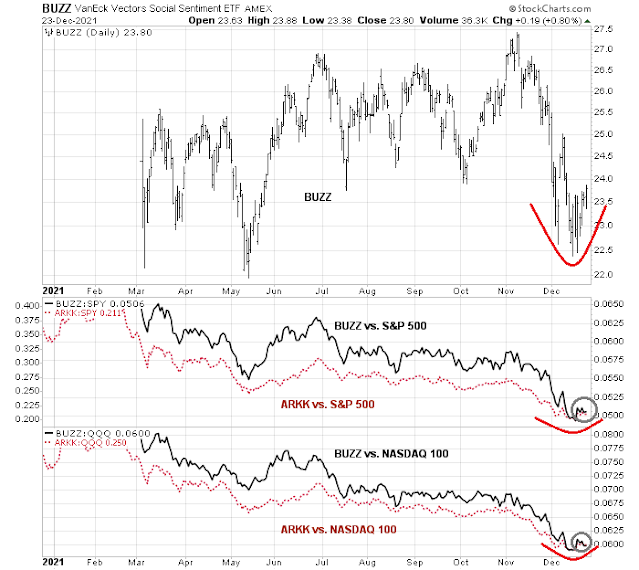 Another hated group is small-cap stocks. While most investors use the Russell 2000 as a small-cap benchmark, which is still stuck in the middle of its trading range, the higher quality S&P 600 is nearing resistance. An upside breakout by the S&P 600 would be a positive sign for the bulls.
However, the market tends to be led by low-quality stocks this time of year. If the seasonal rally is indeed underway, watch for the Russell 2000 to outperform the S&P 600. 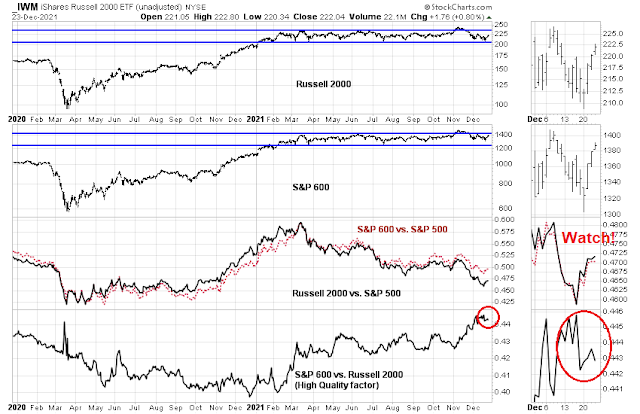 Indeed, an analysis of the quality factor shows that low quality is dominant in both large and small-caps. 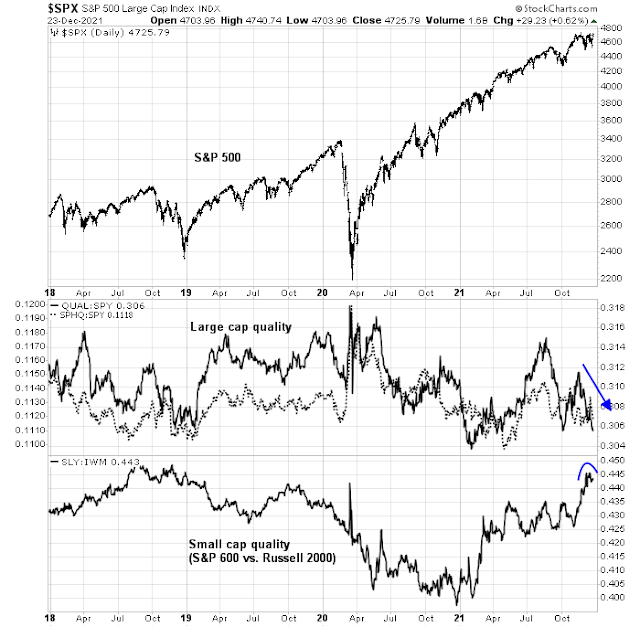 How durable is the advance?

If Santa does come to town, how durable is the advance?
The relative performance of the top five sectors is revealing. These sectors account for over three-quarters of S&P 500 weight and it would be impossible for the index to significantly rise or fall without the participation of a majority. An analysis of the top five sectors shows that three, technology, consumer discretionary, and communication services, exhibited temporary relative strength that appear to be more of a counter-trend nature. I interpret this to be an early warning for traders not to overstay the party. 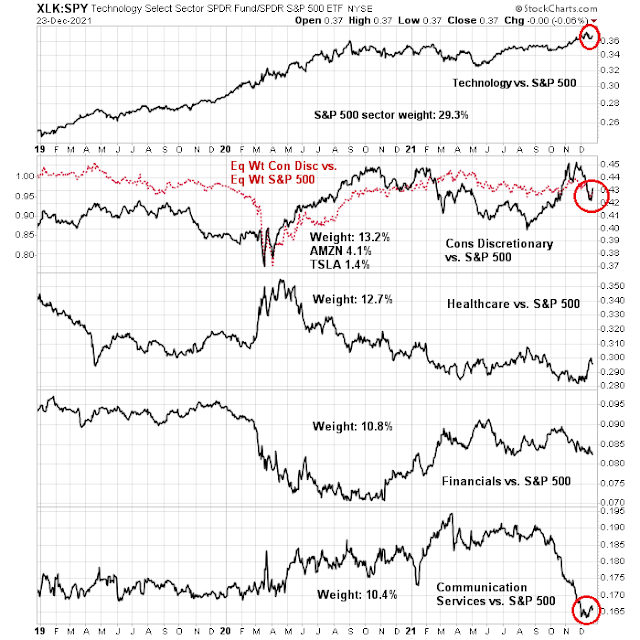 Credit market risk appetite shows a mixed picture. While the relative price performance of junk (high yield) bonds compared to their duration-equivalent Treasuries have confirmed the S&P 500 advance, emerging market bonds have not. As the Fed begins its rate hike cycle, fragile EM economies will be the canaries in the global financial system coal mine and the relative performance of EM bonds is not encouraging.

Before traders turn prematurely bearish, keep in mind that the market staged a rally from an oversold condition and sentiment washout. The NYSE McClellan Summation Index (NYSI) remains oversold on the weekly chart. 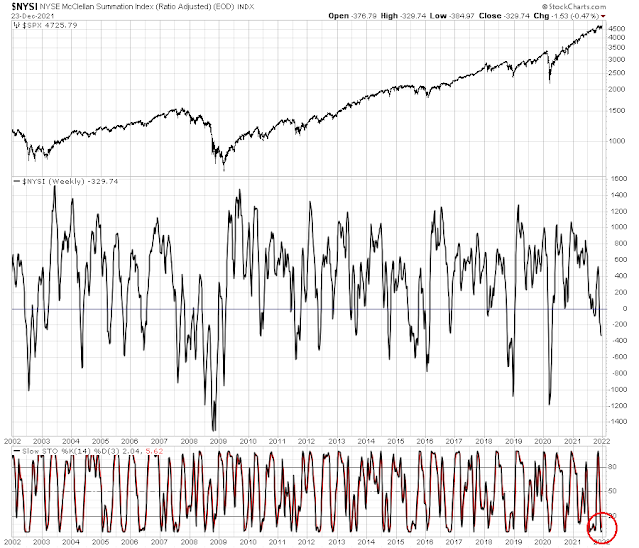 The NAAIM Exposure Index, which measures the sentiment of RIAs, fell below its 26-week lower Bollinger Band two weeks ago. This model has had a remarkable record of spotting short-term bottoms. Tactically, I am inclined to wait for NAAIM to return to the 26-week moving average. This has historically taken between 2-5 weeks from the time of the buy signal, which puts the time horizon for exiting a tactical long position about the middle of January. 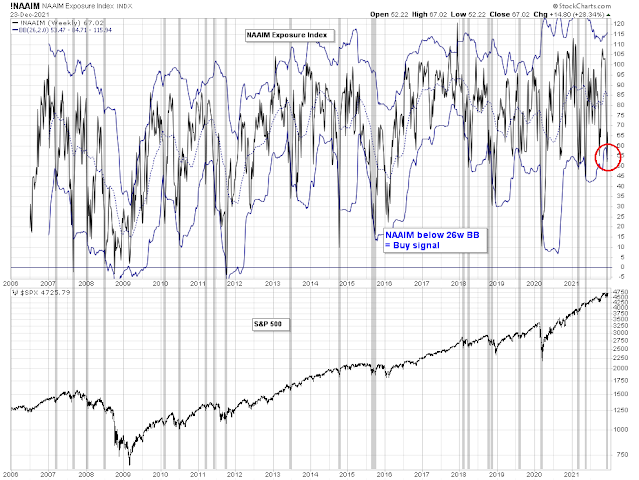 Analysis by Martin Pring [gated at StockCharts] is also supportive of a 2-4 week rally. Pring pointed out that the KST for the put/call ratio had rolled over. (KST is a momentum oscillator that’s “a weighted average of four different rate-of-change values that have been smoothed”.)

Last week, [KST] had started to go flat. Now, it has experienced a decisive peak, which indicates that traders have started to become more optimistic. The arrows show that such action has consistently been followed by a 2-to-4-week rally or more.

This indicator flashed 10 buy signals in the last five years. Of the 10, the S&P 500 rose in seven instances (blue lines), fell in two (red lines), and fell immediately before rising again in one (black line). 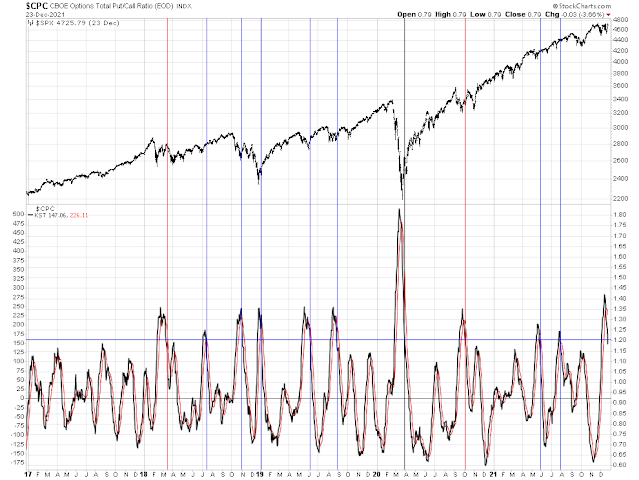 A simple analysis of option sentiment also shows that bearishness has come off the boil but readings are still high. The equity-only put/call ratio has fallen, indicating a retreat in bearishness, but the 10 dma remains elevated. In short, intermediate-term sentiment models are beginning to recycle back to neutral, but conditions are nowhere near crowded long conditions that warrant caution. 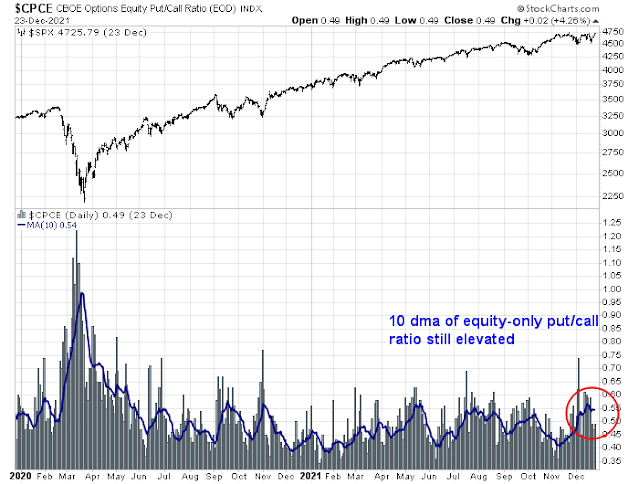 As well, seasonal patterns are supportive of a bullish outcome. The S&P 500 has been tracking its seasonal pattern remarkably well in 2021. If it were to continue, watch for a short-term top about the second week of January. 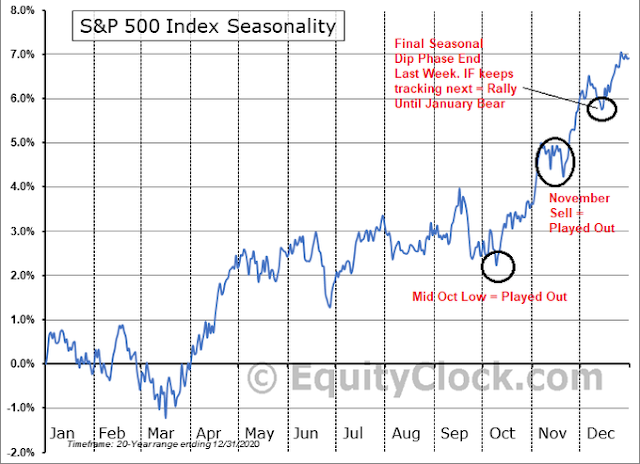 What if Santa doesn`t call?

Mark Hulbert recently demonstrated that the odds have historically favored a market advance after Christmas and for the first two days of the new year. However, there is still the possibility that the Santa Claus rally doesn’t materialize. 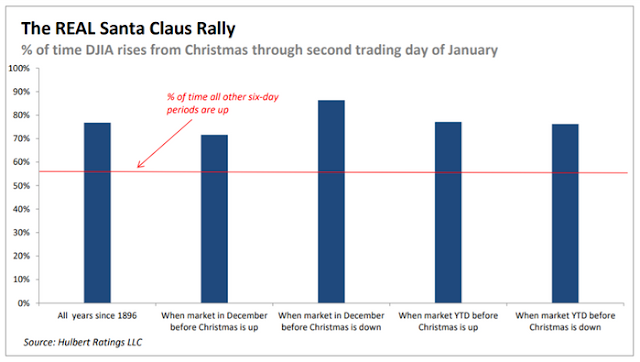 Short-term breadth is very extended and a pause and pullback would be no surprise in the early part of next week. 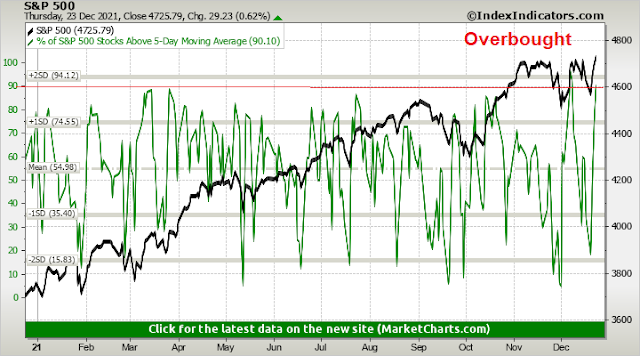 Ryan Detrick of LPL Financial showed the history of returns if the Santa rally fails. While the sample size is small (n=5), the implications for January and the rest of the year are not encouraging.

In conclusion, the market is poised for a year-end rally with an S&P 500 measured objective of 4920. The key risks are faltering market internals and overbought short-term breadth. If the market were to stage a seasonal advance, historical odds point to a trading top in mid-January.
Disclosure: Long SPXL

9 thoughts on “The anatomy of a Santa rally”