Was the Grinch in the house? – Humble Student of the Markets

Mid-week market update: I am publishing this note one day early ahead of my holiday hiatus. Regular service will return Sunday with a trading note.

In the Dr. Seuss children’s story, “How the Grinch Stole Christmas”, the Grinch is a grouchy character who conspired to steal all the Christmas presents from the nearby village. He later has a change of heart and returns all the gifts and participates in the villagers’ Christmas celebrations.
Was the Grinch in the house? It certainly seemed that wau. The Grinch arrived last week in the form of a market pullback accompanied by weak breadth and negative momentum, capped by Omicron shutdown fears and disappointment over delays of Biden’s Build Back Better fiscal stimulus program. 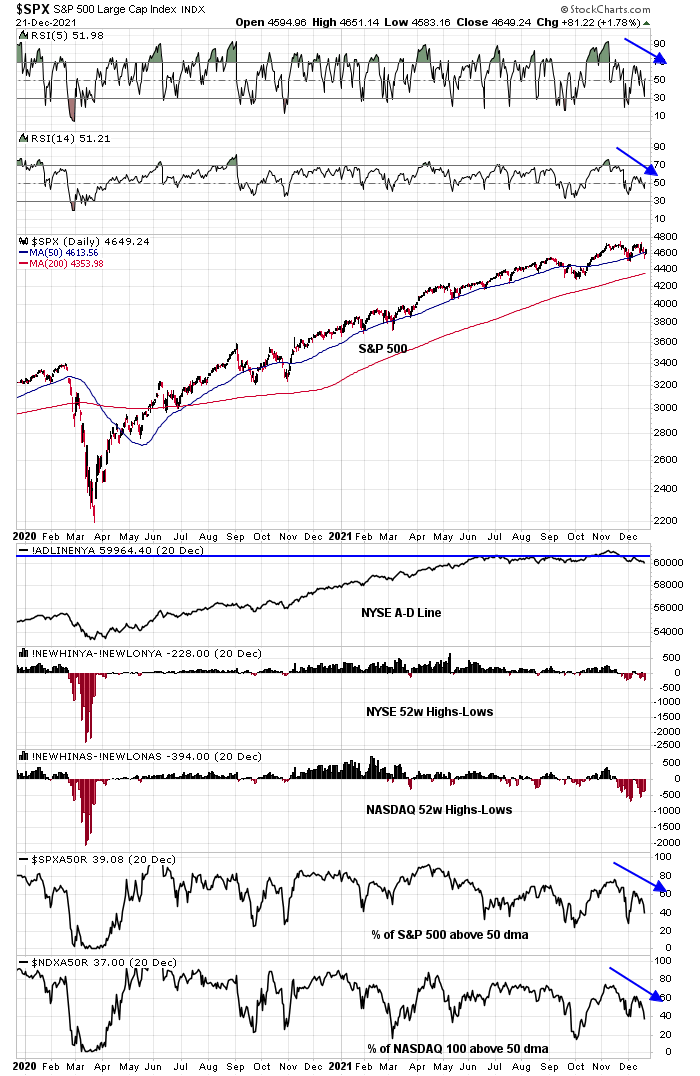 Even though the Grinch has stolen the presents, we may be nearing the end of the story. The market printed a Turnaround Tuesday and the S&P 500 regained its 50 dma.

Ryan Detrick compiled the likelihood each trading day finishes in the green. We are approaching a seasonally bullish period that ends in early January. 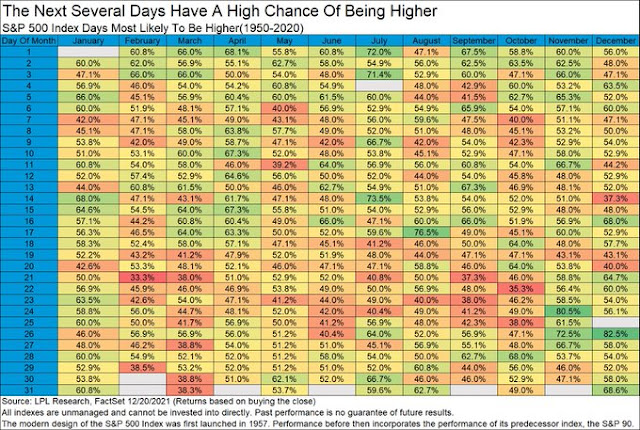 Rob Hanna at Quantifiable Edges published a “three nights before Christmas” study, which begins after the close today. He found that the optimal holding window ends on day 8, which is January 3, 2022. 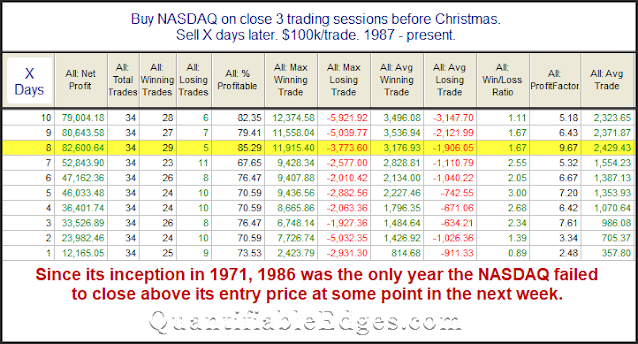 The tax-loss selling activity window is closing this week. The “official” Santa Claus rally window begins in the last five tradings of the year and ends on the second trading day of the new year and the stock market was positive 34 out of the last 45 sessions (75.6%). There are a number of badly beaten-up stocks that should see a rebound next week and in early January. I offer some suggestions.

Breadth readings were oversold based on Monday’s market action. It was therefore not surprising to see prices turn up today. The real question is, “How durable is the rally?” 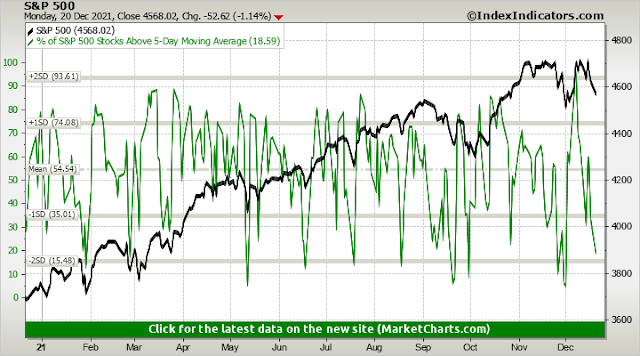 Positioning of systematic and discretionary investors has already declined significantly to the bottom third of the historical distribution (~30-35th percentile). CTAs are fully short small cap and many international indices, while S&P 500 positions are not under pressure given the ~25% one-year appreciation of the cap-weighted benchmark. Volatility targeting and risk parity funds started adding exposure, given muted realized volatility and correlation and internally offsetting large stock moves. There will also be buying of equities into month- and quarter-end – particularly for international, SMID, and cyclical benchmarks that are impacted the most. In short, this is not a setup similar to 4Q2018 from a fundamental or technical angle. Yet, there is aggressive shorting, likely in a hope of declines in retail equity position and cryptocurrency holdings – while in fact both of these markets and retail investors have shown resilience in the past weeks. One should note that large short positions likely need to be closed before (the seasonally strong) January, which is likely to see a small-cap, value and cyclical rally. And given that market liquidity is dwindling, the impact of closing shorts may be bigger than the impact of opening them, when liquidity conditions were better.

The SKEW Index measures perceived tail-risk by quantifying the price of out-of-the-money call and put options in the S&P 500. The index usually varies between 100 and 150. A high SKEW level indicates a high cost of tail-risk protection and vice versa for a low reading. In effect, the index is a proxy for sentiment and volatility.

Many analysts have unsuccessfully used SKEW as a contrarian trading indicator by buying when SKEW is high and selling when SKEW is low. Instead, I introduce a trading model based on the change in SKEW. Whenever the 10-day change in SKEW falls -10% or more, it has been an effective buy signal for the S&P 500. Rapid declines in SKEW indicate alleviation of market anxiety, sort of like a rapid fall in the VIX Index. It can induce market makers to adjust their hedges, usually by buying the index, much like the way the Robinhood crowd created a price momentum effect with massive buying of individual stocks and forcing market makers to hedge by buying the underlying.

The chart below shows the five-year record of this short-term trading model, where bullish resolutions are shown in grey and bearish ones shown in pink. Buy signals have been successful roughly two-thirds of the time, and it just flashed a buy signal. 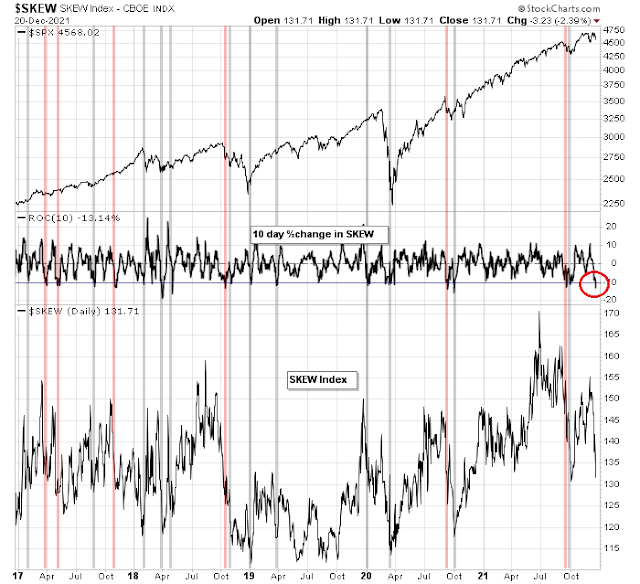 The SKEW model buy signal is timely in light of seasonal effects and consistent with Kolanovic’s call for a short squeeze rally.

With that preface in mind, here are some short-covering candidates that could benefit as a tax loss selling season ends and a rebound begins. Small-cap stocks have traded sideways for most of 2021. They recently exhibited a failed breakout and they are much hated. 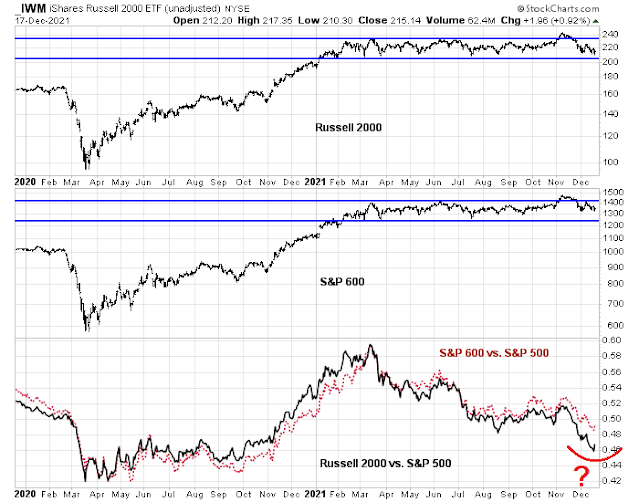 Even though prices have been flat, forward EPS rose steadily in 2021, which makes their forward P/E valuation less demanding.

On the other side of the value/growth spectrum, speculative growth stocks have been clobbered recently while high-quality growth FANG+ names have been the leadership. Trading in these stocks has been the province of small individual investors and recent losses could be the catalyst for tax-loss selling. The ETFs ARKK and BUZZ appear to be good barometers of the speculative growth factor. Watch for a short-term rebound. With the caveat that this is emphatically not a buy recommendation, I am monitoring Nuvei Corp (NVEI) as an example of the shares of a company with speculative characteristics whose price has skidded. NVEI is a payment processor that went public in September 2020. It was the recent target of activist short-seller Spruce Point, which issued a highly unflattering report about the company.  Surprisingly, Andrew Left at Citron Research, which is another activist short-seller, came to NVEI’s defense (story details here). Subsequent to those events, a number of Street analysts brushed off Spruce Point’s allegations and reaffirmed their buy rankings on the stock. If my scenario of a short-covering and tax-loss rebound were to transpire, the price of NVEI should stage a strong relief rally. 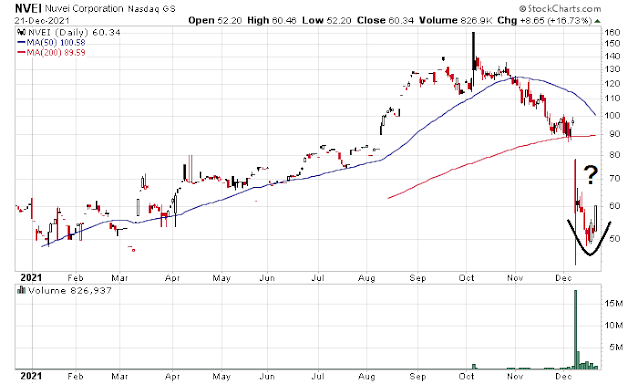 Generally speaking, year-end rallies have been dominated by low-quality leadership. The chart below shows the relative performance of the large-cap quality factor (middle panel) and the small-cap quality factor, as measured by the relative returns of the S&P 600 against the Russell 2000. S&P has a much stricter index profitability inclusion criteria than Russell and therefore the S&P 600 has a quality tilt compared to the Russell 2000.
Historically, low-quality stocks have performed well when the stock market advanced at year-end. With the exception of instances when the S&P 500 fell during the year-end period, which are shown by the pink vertical lines, there have been far more low-quality leadership episodes (blue arrows) than high-quality leadership (red arrows). Keep in mind, however, that the year-end and early January rallies are short-term trading calls. Don’t overstay the party.
Disclosure: Long SPXL

10 thoughts on “Was the Grinch in the house?”