A recession in 2023? – Humble Student of the Markets 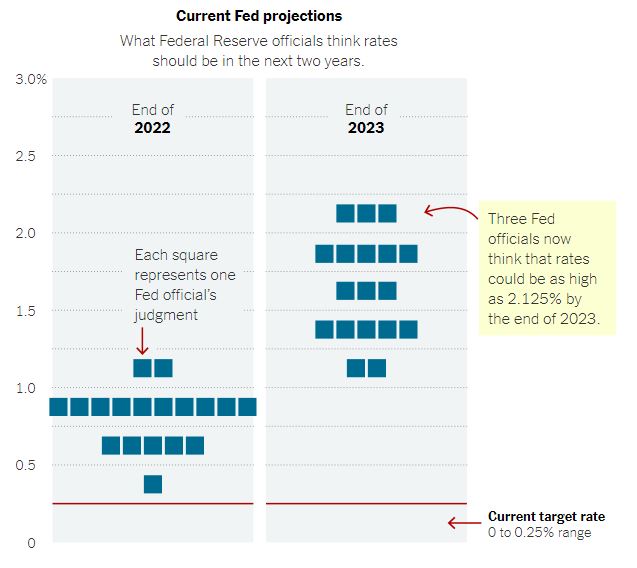 The 10-year Treasury yield is about 1.4% today. All else being equal, the Fed’s dot-plot puts monetary policy on track to invert the yield curve some time in 2023. Historically, inverted yield curves precede recessions and recessions are bull market killers. 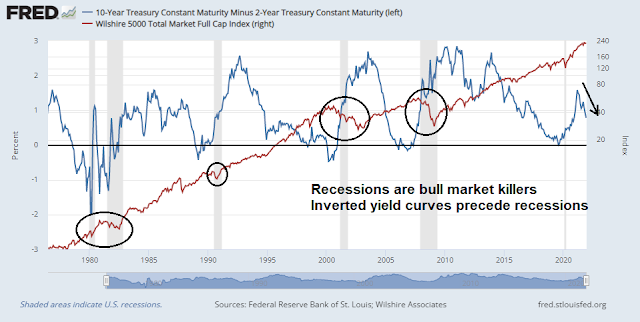 Is the Fed on course to raise rates until the economy breaks?

Much depends on how the bond market interprets the Fed’s monetary policy pivot. Consider the following three scenarios for the 10-year Treasury yield, which currently stands at about 1.4%.
What happens next? Here is what I am watching.
What happens to the yield curve? Recent history shows that inverted yield curves have either slightly preceded or been coincidental with stock market tops. Arguably, the minor inversion in 2019 was a false positive as the 2020 recession was attributable to the pandemic, which is an exogenous event. 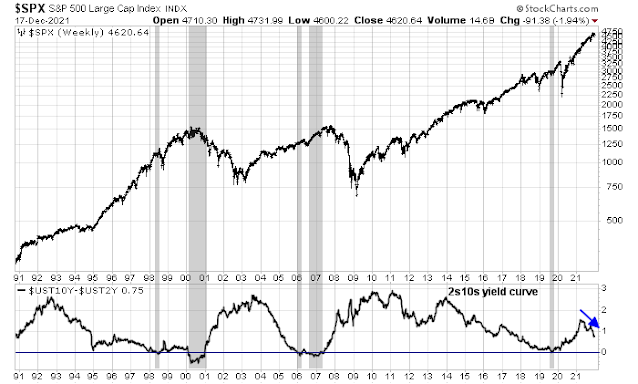 While the dynamics of the British economy is unique owing to the fallout from Brexit, the UK yield curve is inverted from 20 years onward. Is the UK the canary in the coalmine or a special case? Will the inversion spread across the developed markets? 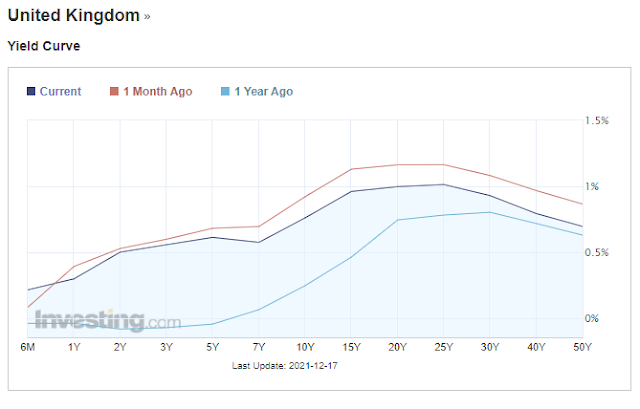 Monitor the growth outlook. Accelerating growth translates to rising EPS estimates, which is equity bullish. So far, the Economic Surprise Index, which measures whether economic data is beating or missing expectations, is rising. 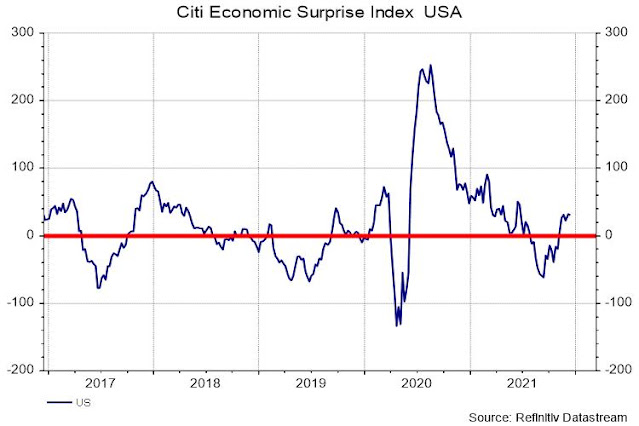 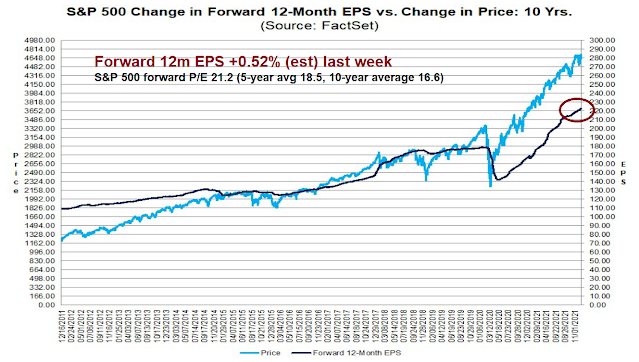 The latest release of global flash PMIs indicate that inflationary pressures look decidedly *ahem* transitory. Supplier delays are rolling over, which should alleviate some of the pandemic-related price pressures. 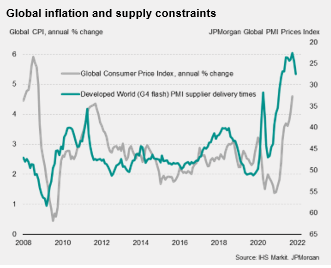 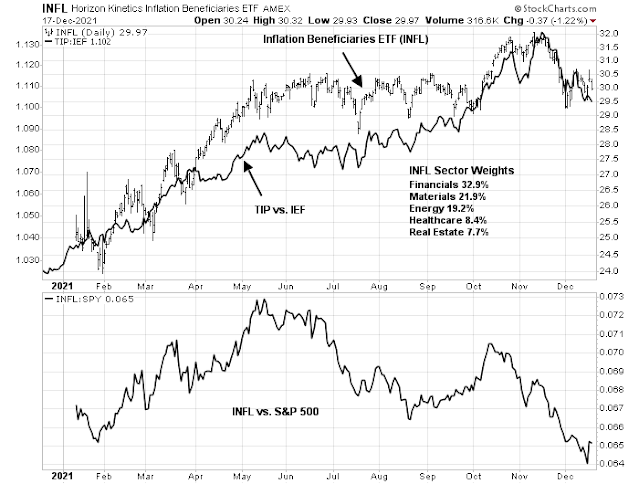 If the Fed raises interest rates until something in the financial system to break, the most sensitive barometers of financial stress are high yield and emerging market bonds. Bloomberg reported that Ken Rogoff warned that EM countries are especially vulnerable to rising rates.

“Developing economies are just an accident waiting to happen,” the Harvard University economics professor said on Bloomberg TV on Wednesday, before the Fed’s policy decision. “There are already a lot of problems in what we call the frontier emerging markets.”
A full percentage-point of Fed rate increases next year could shut some countries out of markets, further straining already vulnerable fiscal situations. He pointed to Egypt, Pakistan and Ghana as nations already battling large debt obligations, narrower market access and, in some cases, double-digit inflation…
Emerging markets are “very sensitive to the hiking-more-quickly scenario,” Rogoff said. “Many, many countries that have access right now, suddenly wouldn’t. That would really be catastrophic.”

Keep an eye on HY and EM spreads. Widening spreads would be bad news for the growth outlook.

A question of credibility

Much depends on the market’s view of the Fed’s inflation-fighting credibility. Here is the FOMC’s Summary of Economic Projections (SEP).

While the initial reaction to the publication of the SEP is to focus on its Fed Funds projections or the dot plot, two other forecasts are equally important. The Fed forecasts that core PCE, which is its preferred inflation indicator, falls from 4.4% in 2021 to 2.7% in 2023. While Jerome Powell has abandoned the term “transitory”, the SEP is projecting an outlook consistent with the now-banned term. Moreover, the December FOMC statement contained a nearly identical sentence as the previous month’s and attributing inflationary pressures to the pandemic and reopening factors is another way of saying “transitory” without using the word.

Supply and demand imbalances related to the pandemic and the reopening of the economy have continued to contribute to elevated levels of inflation.

As well, the SEP forecast calls for the unemployment rate to fall from 4.3% in 2021 to 3.5% in 2022 and remain at that level until 2024. The long-term unemployment rate, however, is 4.0%. In other words, the Fed is signaling that it is willing to run the economy a little “hot” and tolerate some inflation pressure to achieve full employment.
Both of these forecasts are growth-friendly and equity bullish. For equity investors, I sketch out two possible paths. A hawkish reaction, which would be signaled by a flattening yield curve, translates into slowing growth. Under those conditions, investors flock to quality large-cap growth stocks when growth is scarce. Moreover, the forward P/E spreads of FANG+ stocks against the S&P 500 have fallen since September and valuation premiums are not overly demanding. 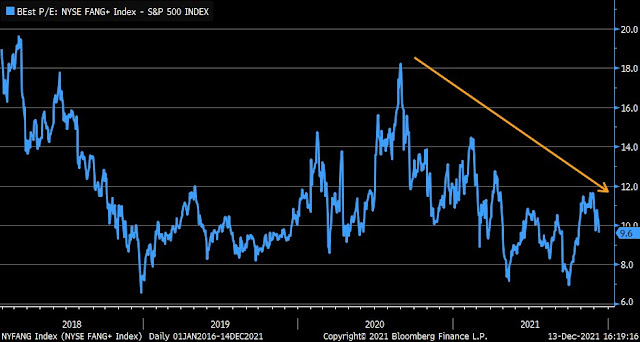 However, investors are best served by avoiding speculative growth stocks as psychology has turned and their bubble seems to have burst. Speculative growth-related ETFs such as ARKK and BUZZ are lagging both the S&P 500 and the high-quality large-cap NASDAQ 100. 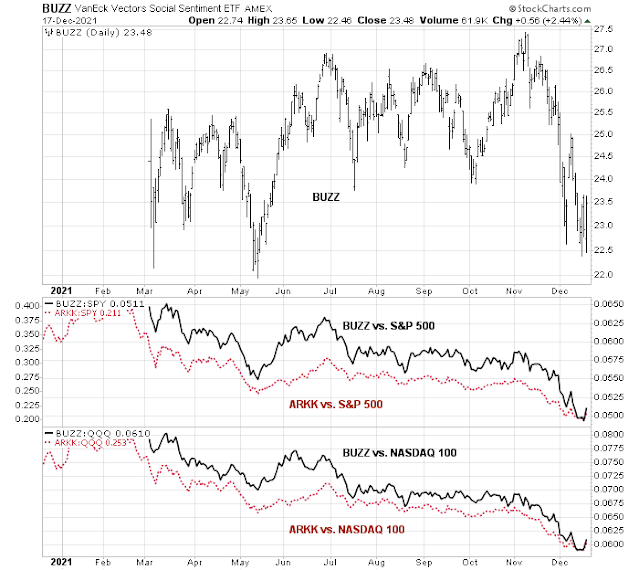 A dovish reaction, or a steepening yield curve, is friendly to value and cyclical stocks. In the current environment, however, a bifurcated market has appeared between large, mid and small-cap value and growth return patterns. The recent dominance of large-cap FANG+ names has meant that growth has been outperforming value among large caps. However, value stocks, which are also concentrated in cyclical sectors, are beating their growth counterparts among mid and small-caps. The bottom panel shows the relative performance of small-cap value against large-cap growth. Based on a head-to-head comparison, large-cap growth remains dominant. 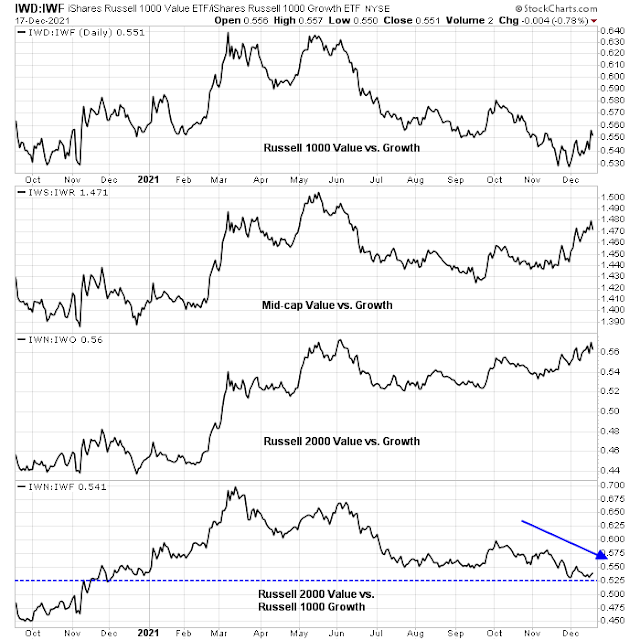 How should investors position themselves? My Trend Asset Allocation Model remains bullishly positioned in equities. However, I have made the case in the past that the economy and market are transitioning from an early cycle recovery to a mid-cycle expansion. During such periods, rising rates put downward pressure on P/E ratios, which is offset by rising EPS estimates. If history is any guide, stock prices tend to move sideways as the Fed starts to raise rates, but we are still several months from liftoff and the market could continue to advance until then. Remain bullish on equities until the market signals a downside trend break, which hasn’t happened yet. 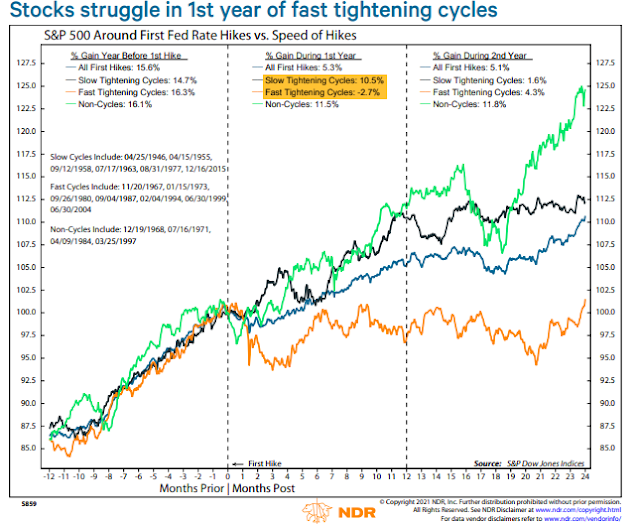 Owing to the uncertainty of the market’s reaction to the Fed’s policy pivot, equity investors should adopt a barbell position of large-cap quality growth and small-cap cyclical value. A scenario of slowing growth should see large-cap growth stocks outperform, while signs of accelerating growth should benefit high-beta small-cap stocks.