A Dow Theory buy signal, but… – Humble Student of the Markets

The classic Buy signal is developed as follows: After the low point of a primary downtrend in a Bear market is established, a secondary uptrend (this is the most often debated part of the Theory) bounce will occur. After that, a pullback on one of the averages must exceed 3%, according to Robert Rhea in his 1930’s The Dow Theory,  must then, ideally, hold above the prior lows on both the Industrial and the Transportation Averages. Finally, a breakout above the previous rally high by both, constitutes a BUY Signal for the developing Bull market.
The chart represents how the Dow Jones Industrial Average and the Transportation Average might look under the most usual BUY signal (B-1):

Both the Dow and the Transports made all-time highs last week, aided by a surge in the shares of Avis. The technical pattern is consistent with the description of a Dow Theory buy signal. 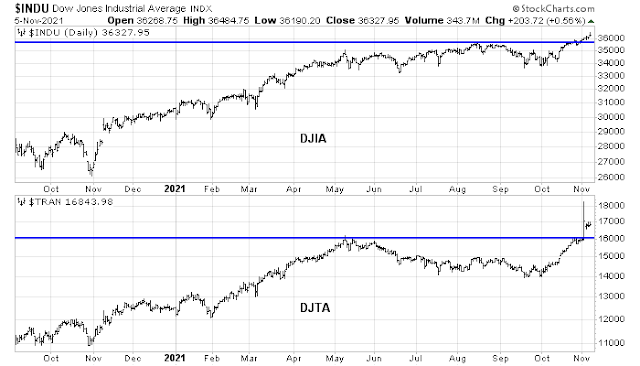 While the Dow Theory buy signal is bullish for stock prices, a number of key risks are lurking as I look forward to 2022.

Let’s start with the good news. There are plenty of bullish confirmations. In the short term, Ryan Detrick pointed out that strong momentum, defined as the S&P 500 up 20% or more in the year, tends to resolve bullishly for November and December. While the same size is small (n=8), the remaining two months have been 100% positive.

The market is also exhibiting signs of strong breadth. A review of different Advance-Decline Lines shows that the S&P 500, NYSE, and S&P 400 A-D Lines have broken out to all-time highs. Only the NASDAQ and S&P 600 A-D Lines are lagging. 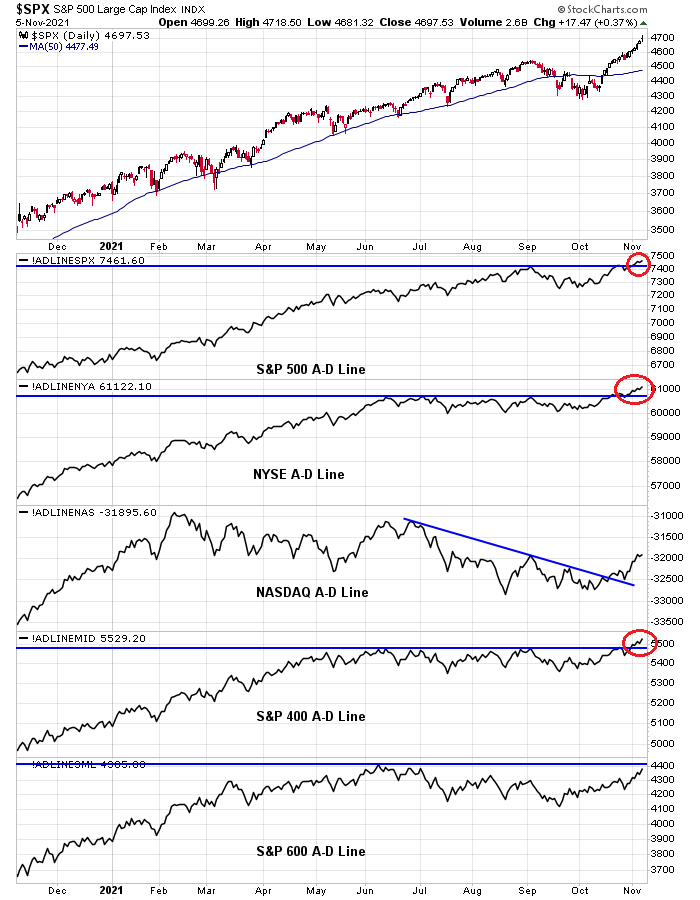 I had written in the past that one of my bullish tripwires is an upside breakout of small-cap stocks out of their trading range. Both the Russell 2000 and S&P 600 broke out last week. 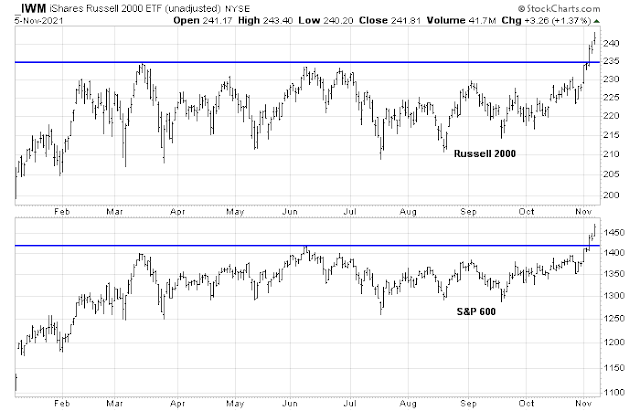 My other key bullish tripwire is an upside relative breakout by semiconductors. While these stocks have staged upside absolute breakouts, they only recently broke out of a relative trading range. This is a signal from a group of growth cyclicals that a global recovery is underway. 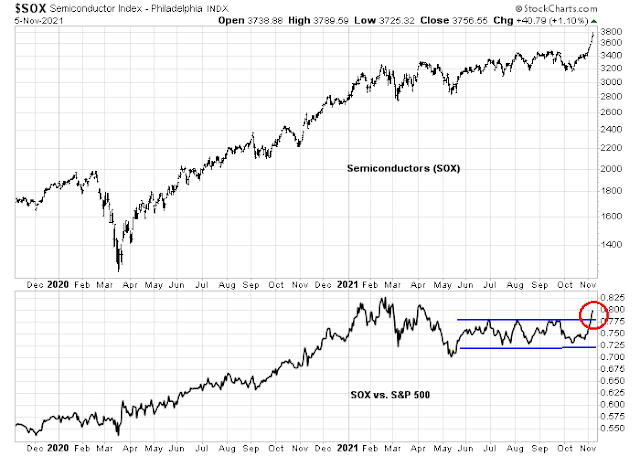 Sentiment readings are also supportive of further gains. The latest Investors Intelligence shows a recovery in the number of bulls, but my former Merrill Lynch colleague Fred Meissner pointed out that the number of bears also rose. I interpret this combination of skepticism in the face of strong momentum as the market climbing the proverbial Wall of Worry. This rally has room to run. 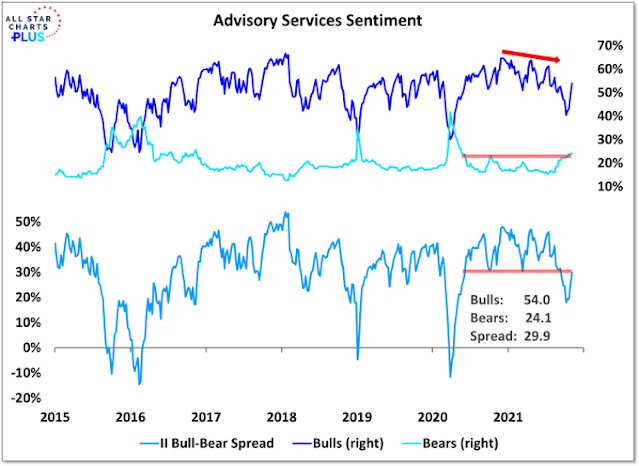 From a fundamental and macro perspective, the signs of a recovery are continuing. The Citigroup Economic Surprise Index, which measures whether economic releases are beating or missing expectations, is rising. In particular, the October Employment Report was a Goldilocks “not too hot, not too cold” report. Job gains were slightly ahead of expectations and the figures from previous months were revised upward. Moreover, gains in average hourly earnings were in line with expectations, which alleviated concerns about excessive wage inflation. 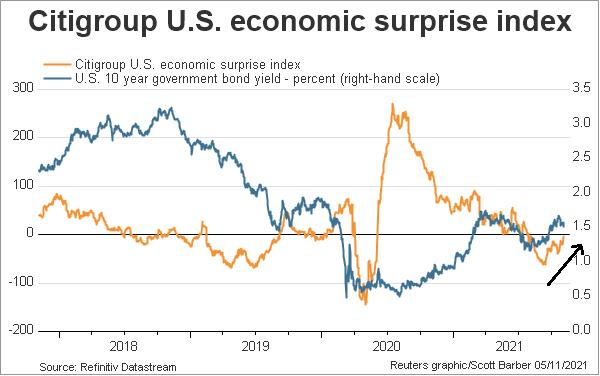 The Q3 earnings season has been solid. Both EPS and sales beat rates are above average and forward 12-month EPS revisions are rising. In addition to positive price momentum, positive EPS revisions are indications of fundamental momentum that is supportive of further gains. 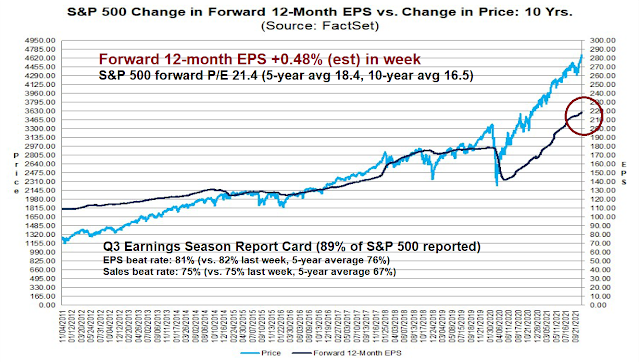 Here is the bad news. While I am slightly early to be writing about the outlook for 2022 in early November, the bad news is that market bulls won’t find next year’s stock market to be as easy.
Consider how quarterly estimate revisions have evolved in the last four years. Historically, analysts have been overly optimistic about their EPS estimates. Initial estimates tend to be high and they are gradually revised downward until the report date and that is why I have monitored forward 12-month estimates as a way of normalizing this effect. The pace of the pandemic recovery was a surprise to the Street, but the rate of upward quarterly revisions rose as the strength of the recovery became evident. The pace of upward revisions has decelerated for the last two quarters and revisions are likely to return to the more normal pattern of negative revisions for the Q4 earnings season. This development shouldn’t necessarily be interpreted as bearish, but the removal of a bullish tailwind for the EPS outlook. 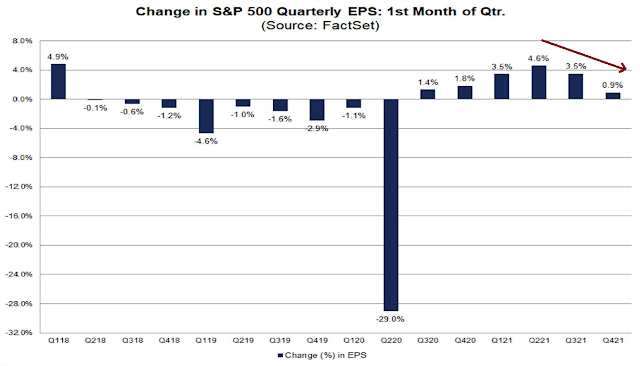 The S&P 500 forward P/E ratio has been slowly falling in the past few months. P/E compression often occurs as the expansion matures from the initial rebound to mid-cycle. The challenge for equity bulls is the E in the P/E ratio has to rise faster than the decline in the P/E ratio. 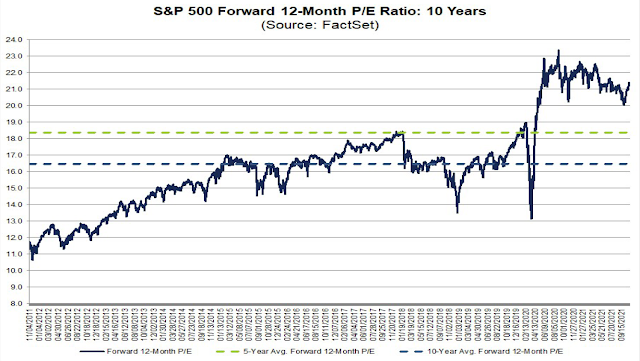 The easy money has been made. The S&P 500 has returned to trend EPS growth. While this doesn’t mean that earnings can’t temporarily grow above trend, the recovery tailwind has dissipated. 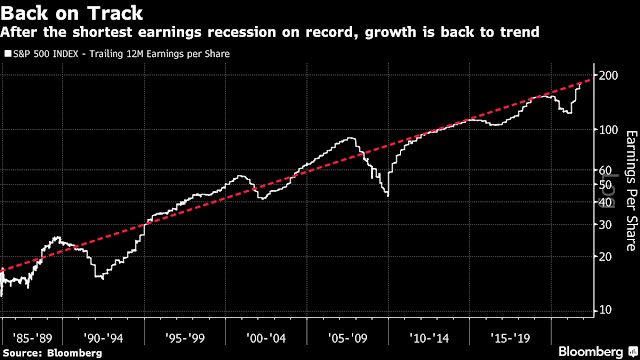 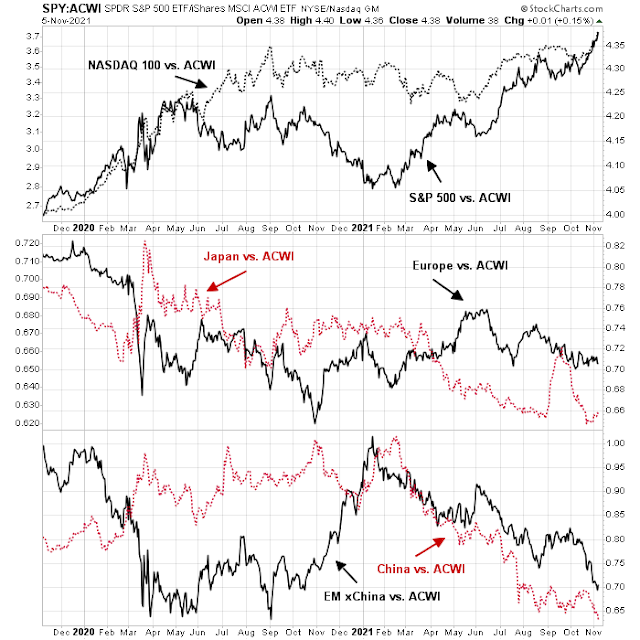 In conclusion, I reiterate my view that the stock market is in a late-phase bull cycle, though that does not mean the economy is in the late-cycle phase of an expansion (see Where are we in the market cycle?).

My base case scenario calls for a stock market rally into year-end led by reflation stocks. We are entering a period of positive seasonality and the market has been tracking the seasonal pattern relatively well in 2021. Expect a growth deceleration soon afterward, a rotation into growth, and a possible correction in Q1, but no bear market.

9 thoughts on “A Dow Theory buy signal, but…”