Where are we in the market cycle? – Humble Student of the Markets

Where are we in the market cycle? The accompanying chart shows a stylized market cycle and changes in sector leadership. 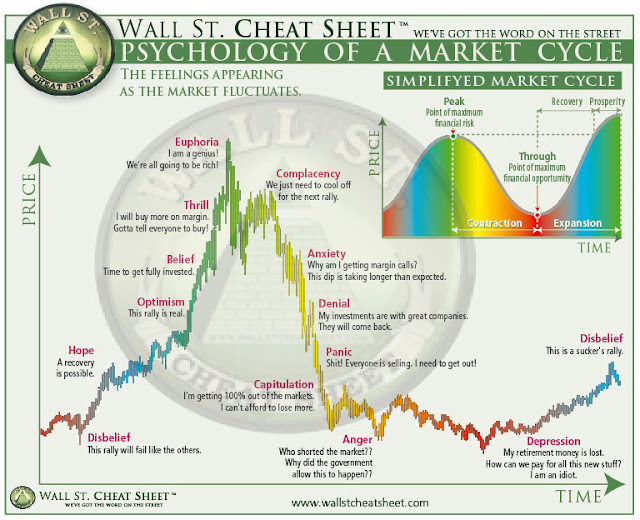 Please be aware that while the psychology of a market cycle parallels an economic cycle, they are not the same. Since Wall Street’s attention span approximates that of a 16-year-old, it is not unusual at all to find several market cycles compressed within a single economic cycle.
What I have described is an idealized market cycle. This economic and market cycle is very different from others. The last bear market was not sparked by monetary tightening, but the exogenous effect of a pandemic. The market leaders of the 2020 bear were not the usual defensive names. Instead, investors piled into work-from-home beneficiaries consisting mostly of Big Tech stocks.
With that preface in mind, where are we in the psychology of the market cycle?

Signs are accumulating that both the psychological backdrop and market action are pointing to a late-cycle advance. The latest BoA Global Fund Manager Survey found that respondents believe inflation is the biggest tail-risk facing investors. 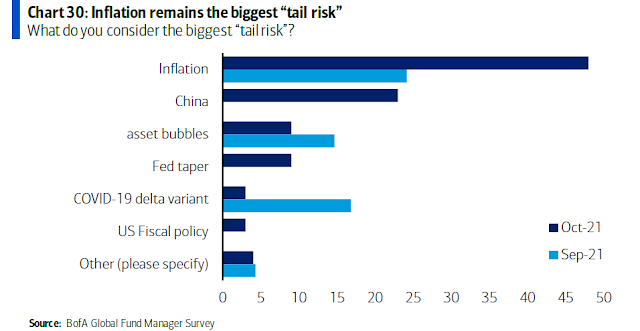 In response, global institutions have rotated into inflation hedge vehicles. 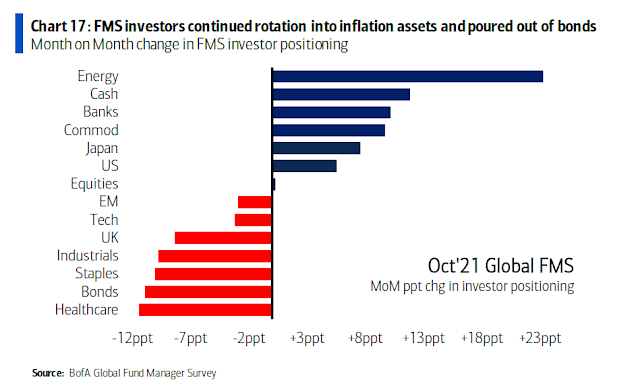 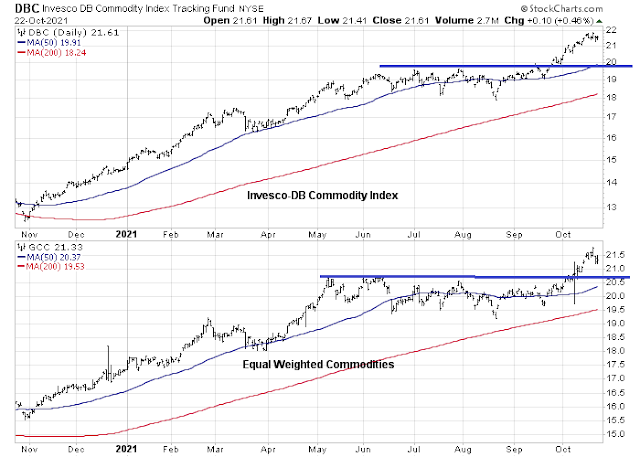 The acute shortage in some commodities has been insane. As a consequence, backwardation of the futures curve. Normally, most futures contracts are in contango, with futures prices slightly above the spot prices with the difference reflecting the storage and carrying costs. Backwardated markets have the spot price above the futures price, which indicates a physical shortage. As an example, the one-year contango in December oil futures have completely blown out. 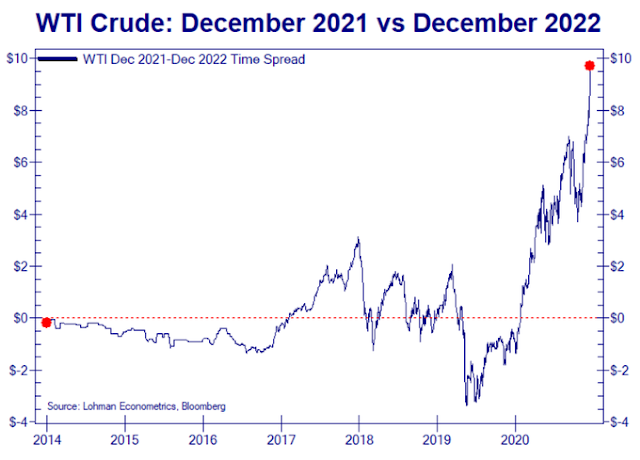 The shortages can also be found in commodities other than crude oil. The LME announced emergency measures to ensure “orderliness and continued liquidity” in the copper market by setting limits on the nearest-term spreads and allowances for holders of some short positions to avoid physical delivery.

Inflation: This too will pass

Before everyone gets overly excited about a commodity bubble, the strength in commodity prices is attributed to – you guessed it, supply chain difficulties and their ripple effects. Goldman Sachs commodity analyst Jeff Currie explained the problem in a recent Bloomberg podcast.

It starts in China, coal in China, and then that creates tightness in gas that created the problems in Europe — Europe substitutes into oil, creating the problem in oil. You’ve shut down the (aluminum) smelters, the zinc smelters, you know, so a lot of people say, you know, that the ground zero of those problems really was coal in China. So I do want to say the situation in China is very dire, but it’s just one part of the world that can create a solution to it rather quickly and they’re trying to with investments in Mongolia. But I want to be careful about restarting a lot of that shuttered coal. For those of us that are Americans and know what a superfund site is in the U.S., restarting these facilities is going to be a lot more difficult, a lot more expensive than I think what people think it will be. So you really got to focus on the new, more cleaner, sophisticated coal, in some of these mines in places like Mongolia. So bottom line, it’s going to be tight over the next three to six months, but once you get that Mongolian coal up and running, the situation should ease, but no way does it solve it.

The root cause of the current spike in inflation indices is a demand-pull problem attributable to supply chain bottlenecks. When an economy exhibits too much demand and not enough supply of goods, inputs and workers, inflation is the result. Tighter monetary policy will not create more natural gas, copper, shipping, and trucking capacity. It is fiscal policy that can play a greater role.
Stephanie Kelton, one of the leading proponents of Modern Monetary Theory (MMT), wrote a NY Times Op-Ed in April on how to think about inflation in connection with fiscal policy, specifically Biden’s Build Back Better plan. In short, it’s all about the capacity of the economy to accommodate demand in the face of fiscal stimulus.

The key to responsibly spending vast sums of money lies in carefully managing the economy’s real productive limitations…
Depending on how big Congress ultimately decides to go on infrastructure, and how quickly, it may need to unleash a whole suite of inflation-dampening policies along the way…
These mostly non-tax inflation offsets could include industrial policies, like much more aggressively increasing our domestic manufacturing capacity by steering investment back to U.S. shores, using even more ‘carrot’ incentives like direct federal procurement, grants and loans, as well as more ‘sticks’ like levying new taxes to discourage the offshoring of plants. Reforming trade policies is another option: Repealing tariffs would make it easier and cheaper for American businesses to buy supplies manufactured abroad and easier for consumers to spend more of their income on products made outside of our borders, draining off some domestic demand pressures.

Despite the recent inflation angst, I am still on Team Transitory. I have shown before how the inflation surge is explained mostly by strength in durable goods demand as people began to work from home and switched their demand from services to goods.

The University of Michigan consumer survey shows that the buying conditions for durable goods is falling as prices rose. It’s difficult to see how the current inflation surge could sustain itself if households demand falls in response to higher prices. 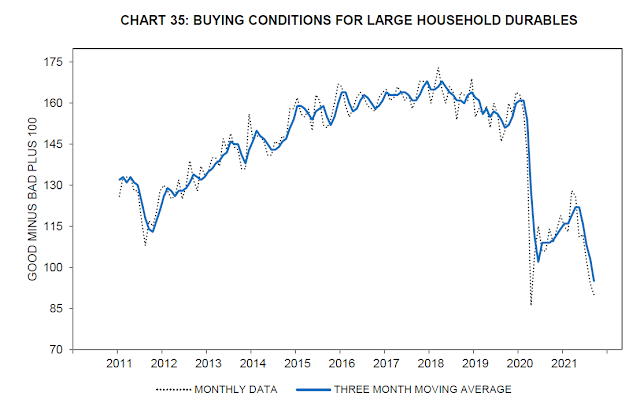 Already, we are seeing signs of the transitory nature of the spike in the data. Monthly inflation rates topped out during the April-June period and have been moderating ever since.

Expectations is a red herring, according to a research paper by Fed researcher Jeremy Rudd. He concluded that policy makers should focus on reported inflation rather than expectations. Rudd’s paper also contained a controversial footnote that dismissed the economics profession in the context of forecasting.

I leave aside the deeper concern that the primary role of mainstream economics in our society is to provide an apologetics for a criminally oppressive, unsustainable, and unjust social order.

A separate Cleveland Fed study found that the accuracy of forecasted inflation fell dramatically as the time horizon lengthened. While the long-term record from 1986 was reasonable, the recent record starting in 2011 showed that the accuracy of inflation forecasts fell dramatically within two months and was virtually useless past a six-month time horizon.

The market is setting up for a mistake in its inflation and interest rate expectations. Fed Funds futures are indicating a rate hike by the July 2022 FOMC meeting and a second increase at the December meeting. These expectations are likely too aggressive. 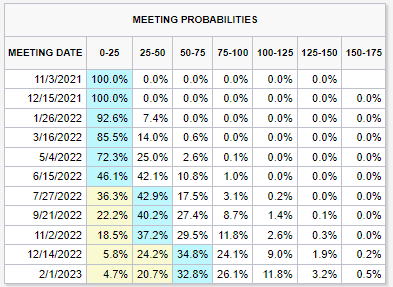 Why are stocks rising?

In light of rising expectations for rate increases, why are stocks rallying? Rate hike expectations are being pulled forward and economic growth expectations are falling. The Atlanta Fed’s latest Q3 GDP nowcast has tanked to a minuscule 0.5%. 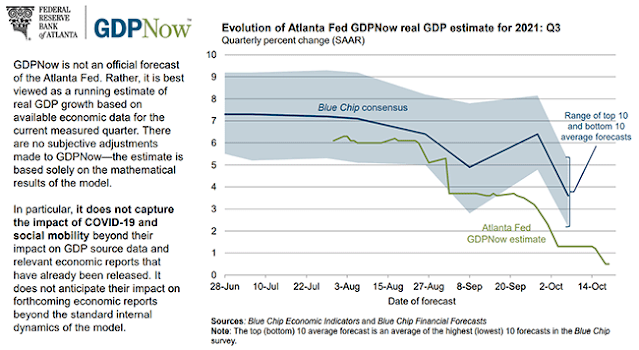 To be sure, Q3 earnings season has been strong. Earnings estimates are rising and beat rates are above average. Strong positive fundamental momentum is supportive of higher prices. 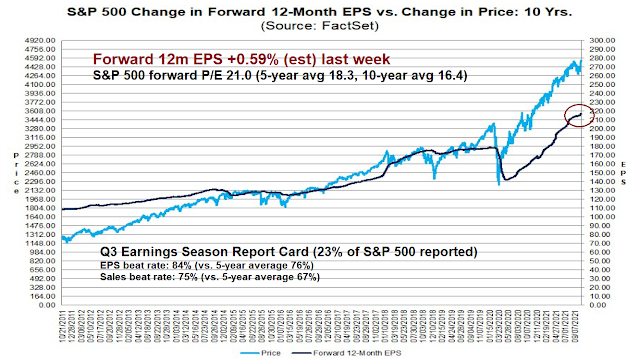 All else being equal, rising EPS estimates allows the forward P/E to fall, which is supportive of valuation and stock prices. 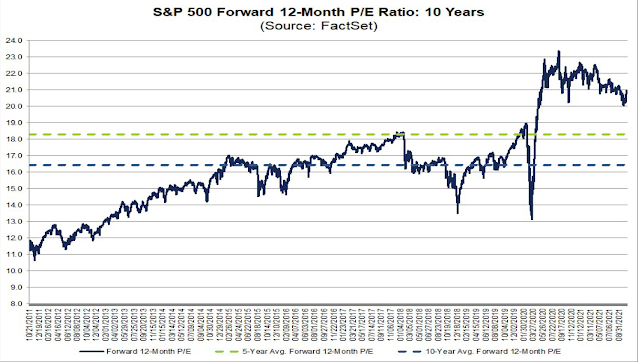 At some point in the near future, the market will begin to recognize the transitory nature of the inflation surge. Bonds will no longer be unbuyable and yields will begin to ease. That will mark the transition to the next phase of the market cycle.
This next phase will be marked by a leadership rotation from late-cycle inflation hedge and cyclicals back to growth stocks. Growth companies are duration plays and they have the greatest sensitivity to falling bond yields.

I don’t expect a recession-induced bear market during the transition. Recessions are bull market killers, but there are few signs of a recession on the horizon. New Deal democrat, who monitors the economy using coincident, short leading, and long leading indicators, remains bullish on the economic outlook.

All three time frames remain quite positive. Delta continues to recede, and the impact – if any – of the ending of all remaining emergency pandemic benefits last month has been limited.

However, the economy is likely to see a growth scare next year, which could spark a correction.

There are many signs in data that the white-hot Boom is cooling. But nothing to indicate it is actually in any danger of rolling over in the immediate future.

My base case scenario calls for a stock market rally into year-end led by reflation stocks. We are entering a period of positive seasonality and the market has been tracking the seasonal pattern relatively well in 2021. Expect a growth deceleration soon afterward, a rotation into growth, and a possible correction in Q1, but no bear market. 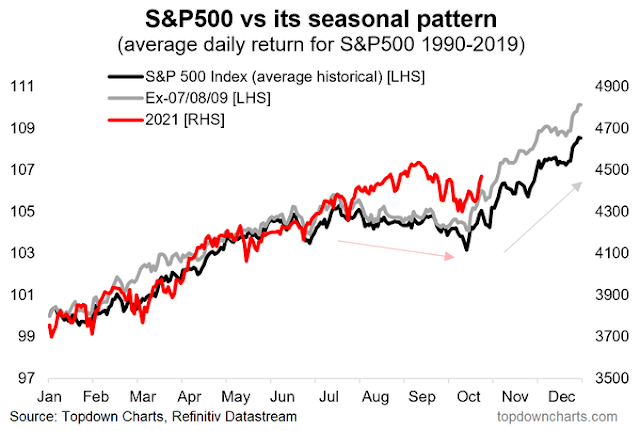 While it’s impossible to precisely forecast the timing of the inflection point, I can offer the guidepost of the 10-year Treasury yield, which has tracked the value/growth ratio closely in the last two years. If the 10-year yield starts to fall in a decisive way, the rotation from reflation and value to growth has likely begun.

12 thoughts on “Where are we in the market cycle?”