What more could the bulls ask for? – Humble Student of the Markets 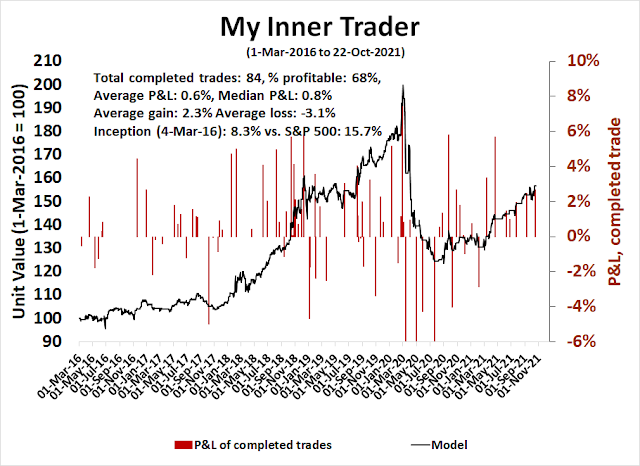 It is said that there is nothing more bullish that an all-time high. The S&P 500 did just that on Thursday. Neither of my warning signals have sounded warnings just yet. The 14-day RSI is not overbought. As well, the VIX Index has not fallen below its lower Bollinger Band. 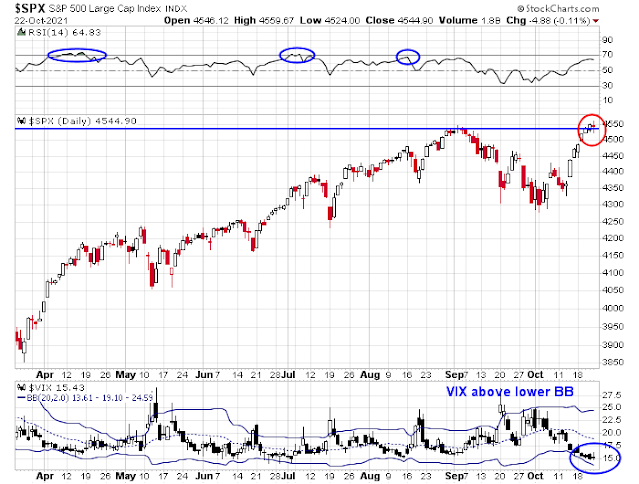 What more could the bulls ask for?

There were other bullish signals confirming the fresh high. A comparison of the S&P 500, mid cap S&P 400, and small cap S&P 600 shows that only the S&P 600 hasn’t achieved a fresh high. 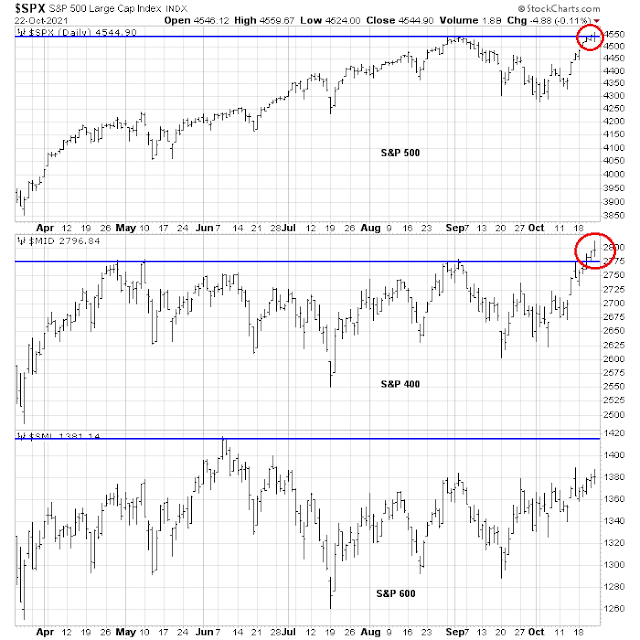 Different versions of the advance-decline lines were also supportive of the bull move. The S&P 500 and NYSE A-D Lines broke out to new highs while the S&P 400 A-D Line is close. Only the NASDAQ and S&P 600 A-D Lines are laggards. 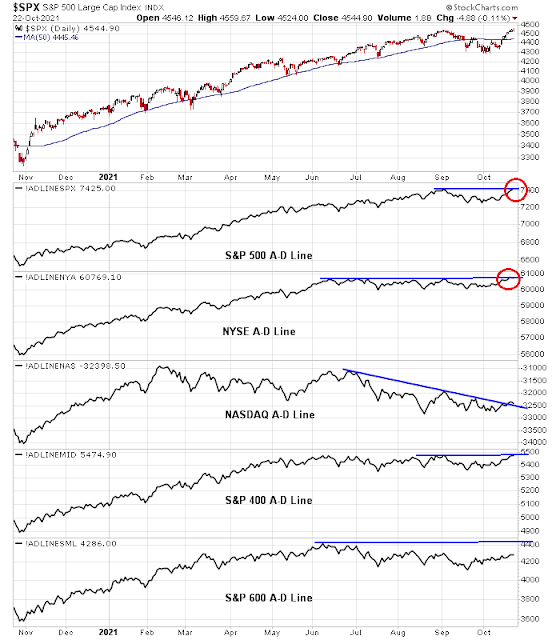 The latest rally is characterized by value stock leadership. Both the large cap Russell 1000 Value Index and Mid-cap Value have broken out to new highs. Small-cap value is lagging. 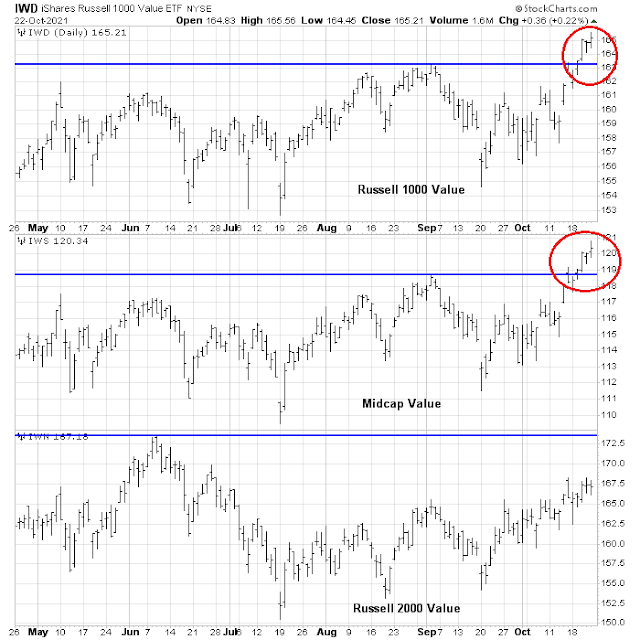 The bulls couldn’t ask for much more than this.

On the legislative front, the Democrats continue to squabble over Biden’s Build Back Better legislation. A piece of good news for equity investors is the planned corporate tax increases appears to be off the table.
I am monitoring the infrastructure stocks (PAVE), which have staged an upside relative breakout from a falling trend line. Is that a ray of hope that a more pronounced capex cycle is on the way? 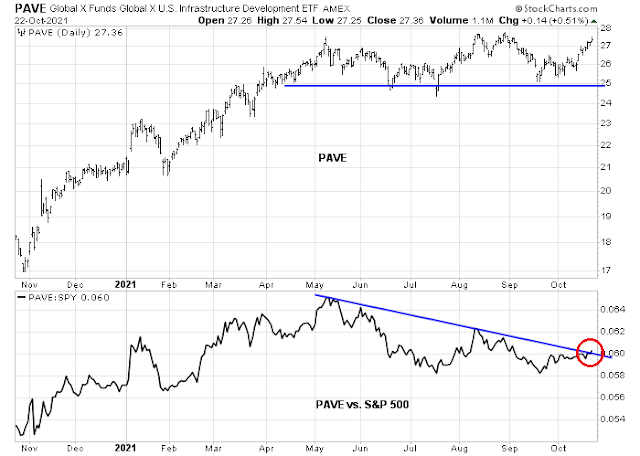 Sentiment is turning bullish, but levels are not extreme enough to flash contrarian bearish warnings. The combination of strong positive momentum and mild sentiment readings are supportive of further gains.
The AAII bull-bear spread is one of many examples of improving sentiment, though conditions don’t indicate a crowded long. 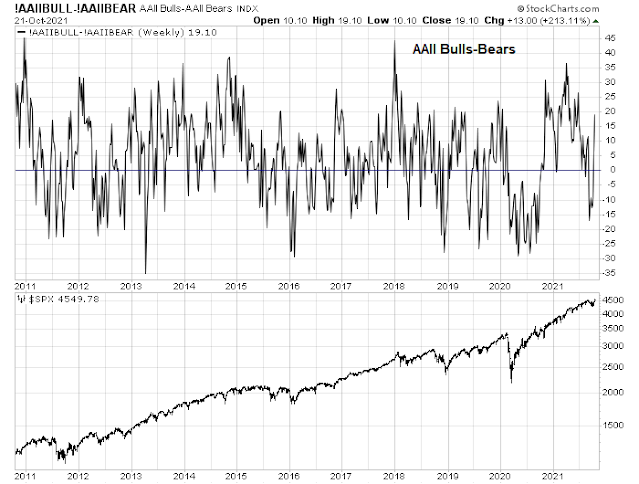 The Fear & Greed Index is another example. I could go on, but you get the idea.

Tactically, the market advance is due for a brief period of consolidation and possible minor pullback. The S&P 500 has been on an upper Bollinger Band ride. At some point in the near future, the ride will end and it may have ended Friday when the S&P 500 was down -0.1%. The market has gone on five upper BB rides in the past year. It has consolidated sideways on three occasions and pulled back on two. The strong underlying strength of the market leads me to believe that a consolidation is the most likely outcome but any pullback should be fairly shallow.

We are in the heart of earnings season next week. While the response to last week’s reports have mostly been positive, don’t be surprised if the market hits an air pocket from an earnings report. In particular, keep an eye on FB (Monday) and GOOGL (Tuesday) in light of last week’s SNAP comments on  the advertising environment. 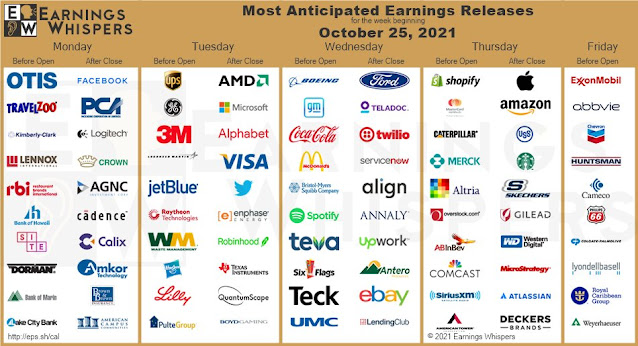 In conclusion, there is nothing more bullish than a fresh high and the S&P 500 has surpassed that hurdle. Tactically, the market can pause its advance at any time but downside risk should be limited. The intermediate term outlook is bullish and traders should be prepared to buy any dip in anticipation of further gains.

39 thoughts on “What more could the bulls ask for?”