Another upper BB ride – Humble Student of the Markets

Mid-week market update: The S&P 500 has been undergoing a ride on its upper Bollinger Band (BB), which historically has been a bullish sign of price momentum. The bigger question is how the tape will behave when the upper BB ride ends. 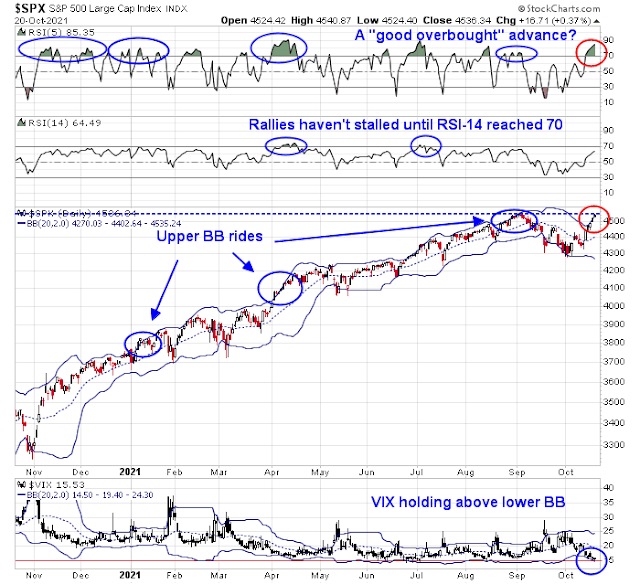 Here are some observations:
The initial verdict is short-term bullish, though the S&P 500 will have to contend with the all-time high resistance zone between the closing high of 4537 and intra-day high of 4546.

Sentiment readings are becoming a Rorschach inkblot test for traders. On one hand, the bull-bear spread from Investors Intelligence has begun to edge up from depressed levels, which indicates a recovery of extreme bearishness and a signal that this rally has room to go. In particular, bearish sentiment edged upwards, which is an indication of continued skepticism and the market climbing the proverbial Wall of Worry. 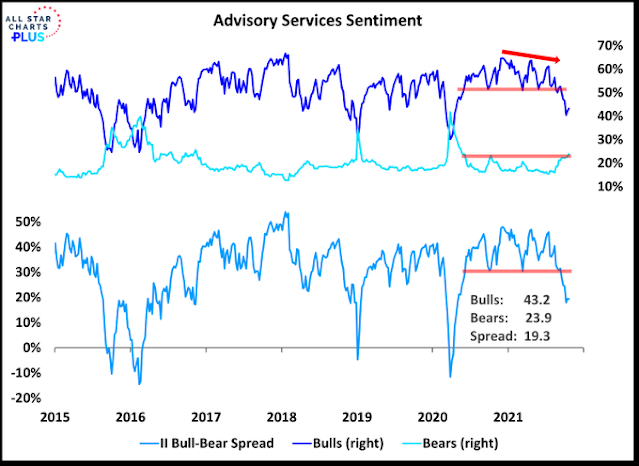 On the other hand, Helene Meisler conducts a regular (unscientific) Twitter poll. The results from last weekend saw net bulls-bears over 30. Such an extreme reading is rare and there were only three other instances during the brief history of her poll. The market pulled back on one occasion and continued to rise on the other two. 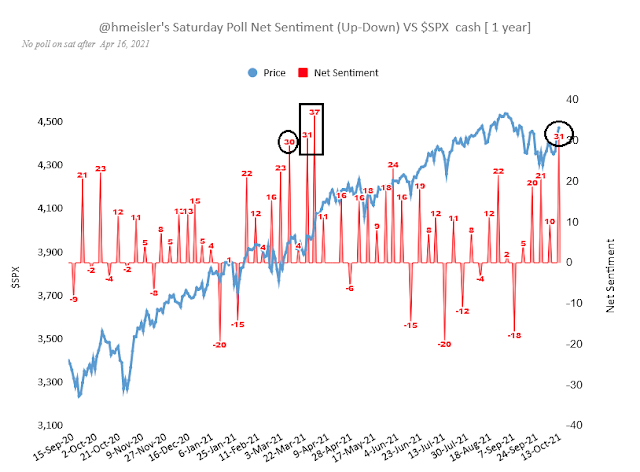 This is what I mean by the Rorschach test of sentiment model interpretation. I consider these models differently. The II sentiment survey tends to have a longer-term time horizon and the intermediate-term outlook for stocks is up. The Meisler survey respondent sample is made up of very short-term traders. Such extreme bullishness could be considered to be contrarian bearish in a conventional fashion or an indication of strong price momentum that could carry the market higher.

A consideration of the price momentum factor, which is a stock selection factor that measures whether individual outperforming stocks continue to outperform (as opposed to market momentum, which postulates that a buying stampede will lift the index), using different flavors of the momentum factor shows that returns have been flat to up. This is an indication of a healthy internal rotation between stocks as the market rises. 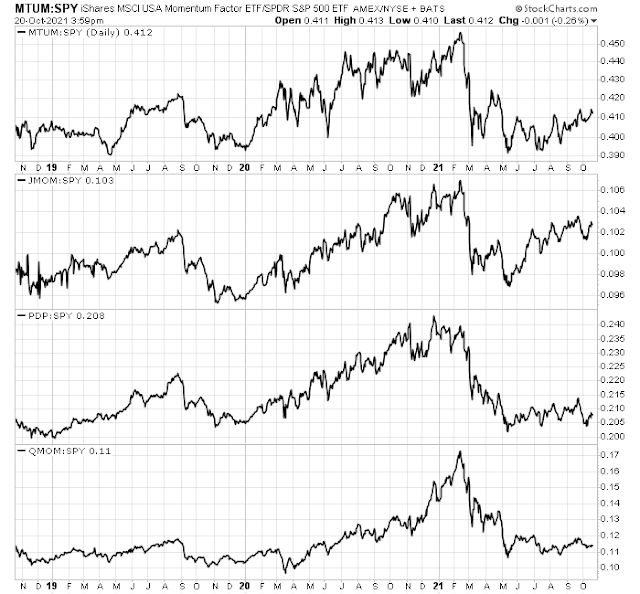 Equity risk appetite is constructive. The equal-weighted ratio of consumer discretionary to staples has made a fresh all-time high, which is bullish. However, the ratio of high-beta to low-volatility stocks have lagged, though conditions are not so severe to cause any great concern.

A further bullish catalyst could be an agreement among the squabbling Democrats on Biden’s Build Back Better bill. The current period is reminiscent of the bargaining leading up to the passage of ACA, otherwise known as Obamacare. An agreement in principle could be forthcoming by the weekend. Keep an eye on the infrastructure ETF (PAVE). An upside relative breakout could be a signal for a bullish stampede into cyclical stocks. In conclusion, the stock market appears to be starting its melt-up into year-end. As we proceed through earnings season, individual reports may cause hiccups in what is an overbought market, but investors and traders should seize the opportunity to buy the dip.

51 thoughts on “Another upper BB ride”